There was a time when the world was a simpler place, when I could (mostly) explain technology to my dad. Those days are long gone, and nothing better illustrates that than the Sound BlasterX G6 (See it on Amazon). It’s a combination hi-res DAC (Digital-to-Analog Converter) and headphone amplifier that plugs into your PC or gaming console, offering up dramatically better sound than what your rig provides on its own. It’s for audiophile gamers who want better sound quality than that offered by whatever soundcard is embedded on their motherboard. In other words, it’s a high-quality external sound card – I suppose it’s not all that complicated after all. 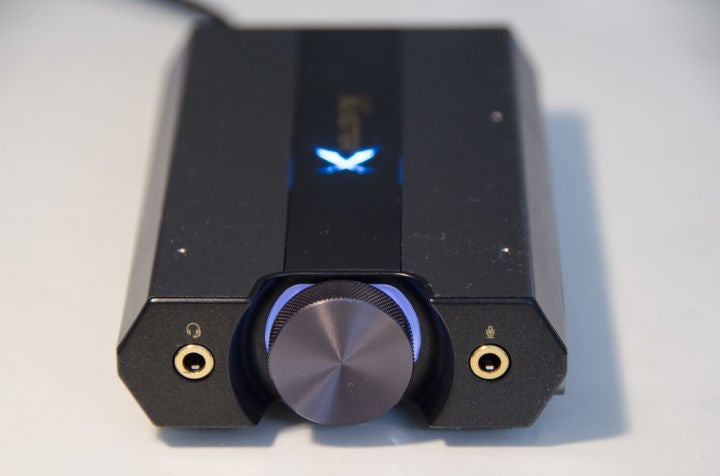 The tail end of the box houses the USB connector and optical input/output ports, which enable the G6 to work with consoles like the PS4 and Xbox One—but if you are only using this with a PC, you can ignore them.

The left side of the box is really the business end, packed as it is with controls and indicator lights. The SBX button toggles the Sound BlasterX surround profile on and off. By default, you get a profile that heightens audio for games, with an expanded soundstage, deeper bass, and a crisper high end – but when used with the desktop software, you can change which profile that button triggers. The next button toggles Scout Mode, the G6’s secret weapon that boosts directional cues and environmental sounds (like enemy movements and weapons handling) within games. 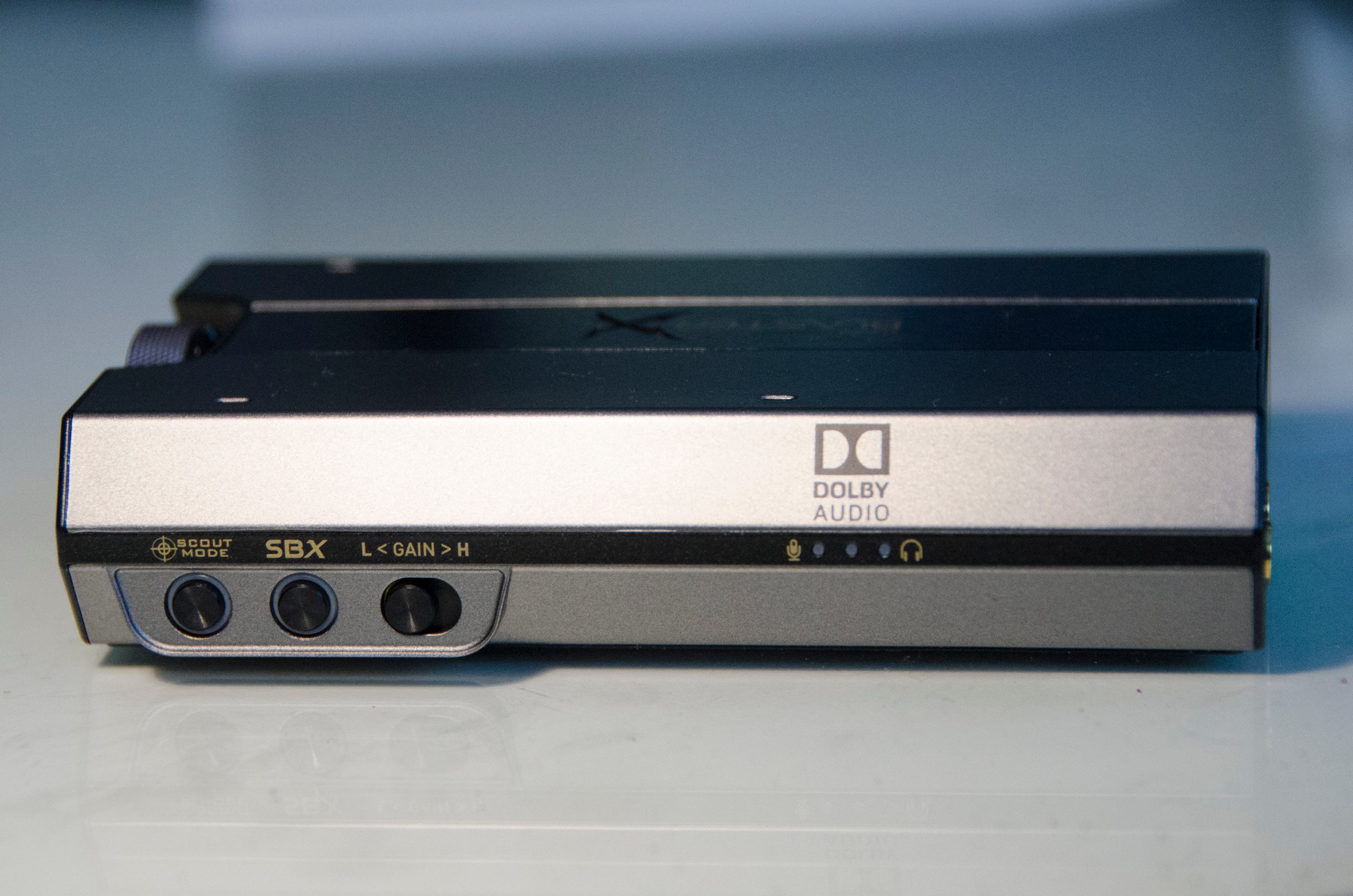 The last of the switches lets you toggle between low- and high-gain headphones. Most gaming headphones are low impedance and work fine in the “L” position, but the G6 supports high-end, high-impedance headphones (like audiophile models from Beyerdynamic and Sennheiser) with a high-gain “H” setting. Bottom line: If you know your headphones are 160 ohms or higher, use the “H” setting, but otherwise you should stick with the “L.”

Finally, there’s a set of status lights that show you headphone and microphone status at a glance, such as whether the microphone is hot or muted, and if Dolby is active.

The volume dial deserves MVP status. The knurled dial feels like it belongs on a high-end audio rig or a Leica camera; it turns smoothly and allows for very fine adjustments to volume. Press to mute, or press-and-hold to toggle between the headphone and microphone volume. In this way you can separately adjust headphone and mic volume, and see the status via solid and blinking lights on the side of the box. Speaking of lights, the volume dial is softly illuminated from behind, and the selected Scout Mode and SBX button illuminates as well – nice flourishes to an otherwise plain box.

The knurled dial feels like it belongs on a high-end audio rig or a Leica camera.

The bottom of the G6 is slightly rubberized, which makes it somewhat slip-resistant. It’s not especially grippy, so it still tended to slide around a bit on my desktop. And if you’re a fan of LED lighting, there’s something here for you – the Sound BlasterX logo illuminates (and can be programmed via the desktop software through the full range of 16.8 million colors).

Under the hood, the G6 is built on a DAC that supports 32-bit/384kHz playback with a very wide dynamic range of 130 dB. The two channels are independently amplified, which is ideal for gaming, where the left and right channels might need to process significantly different audio loads.

Setup on a PC is simply a matter of connecting the USB cable. But it’s also compatible with the PS4 (via USB and optical), Xbox One (optical, but you’ll need to plug the G6’s USB port into an AC adapter for power), and Nintendo Switch (USB, naturally). Unfortunately, Creative doesn’t include a power adapter, so you’ll need to provide your own if you’re plugging it into an Xbox. That’s not the only inconvenience. Unless you have crazy-long cables, the G6 will sit on a shelf with your console. Meanwhile, you’re halfway across the room on the sofa, where adjusting the volume is a distant dream.

While the G6 works fine with consoles, it really comes alive on a PC, where the Sound Blaster Connect desktop app lets you thoroughly customize your audio experience. Without the app, you can toggle between Scout Mode and the SBX surround profiles. The app, though, gives you a dashboard of preset profiles for music, movies, and about 2-dozen games (including DOTA, Overwatch, Fortnight, League of Legends, and more). You are free to make your own, leveraging tools like an equalizer, a surround feature that expands the soundfield in virtual 7.1, and a feature that punches up in-game dialog. 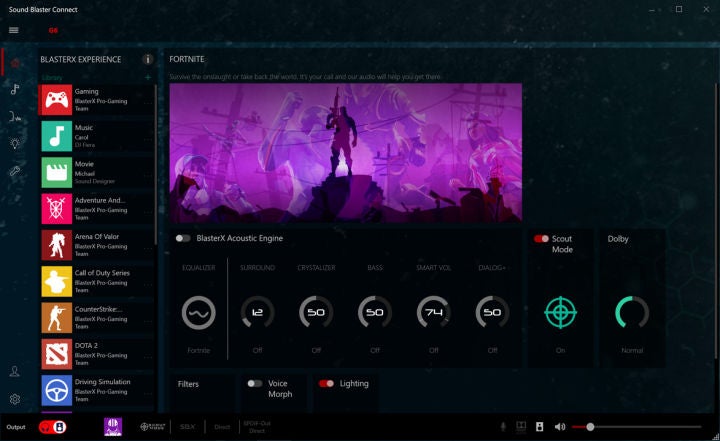 The app, though, gives you a dashboard of preset profiles for music, movies, and about 2-dozen games (including DOTA, Overwatch, Fortnight, League of Legends, and more). You are free to make your own profiles too, leveraging tools like an equalizer, a surround feature that expands the soundfield in virtual 7.1, and a feature that punches up in-game dialog.

Creative also lets you tweak the lighting. You can choose to illuminate the Sound BlasterX logo with a steady glow, a pulsating throb, or by reacting to the beat of music. It’s pretty subtle, though. If you want a Vegas-style lightshow, this ain’t it (instead, take a look at something like Creative’s Katana desktop soundbar).

To be perfectly honest, I had modest expectations – I was expecting a subtle improvement in sound quality that might require a fair bit of A/B testing to notice. That was not the case.

From the first moment that I fired up Wolfenstein II, for example, it was clear that the G6 pumped more raw volume to the headphones than my PC’s built-in sound chip could possibly deliver, even near its max setting. Sound at both the high and low end seemed noticeably enhanced; the low drone of explosions and gunfire boomed satisfyingly in my ears, while at the high end, dialog and weapons were sharper as well. In a nutshell, the soundscape is better defined, and added up to a more immersive experience.

I loved the presence of the Scout Mode button on the side of the G6.

In addition, I loved the presence of the Scout Mode button on the side of the G6; enabling it unambiguously changed the soundstage by emphasizing dialog, environmental sounds, and directional cues. Unlike the LED, this particular feature is not subtle; while I sometimes have trouble distinguishing the direction of activity in my headphones, that was not the case with the G6. Surround sound definition was outstanding, and Scout mode was the acoustic equivalent of shining a spotlight on directional cues in the game. I could sometimes hear enemies in Call of Duty: Black Ops before I could actually see them, and Fortnight was almost a different gaming experience altogether – every effect from waterfalls to car horns to weapons fire was emphasized in a visceral way. After playing for a day or two with Scout Mode on, turning it off made games feel incomplete in comparison.

At first, all of this arrived in my ears via the Sound BlasterX H6 headphones – rock solid cans which had already proven their mettle with my PC’s integrated audio. To be honest, I was surprised that the G6 could coax obviously better sound from the headphones, because – not knowing what I had been missing – I thought they had sounded pretty darned good to begin with. But what about some genuinely high-end audiophile headphones? Could the G6 improve them as well? Luckily, I had a pair of Beyerdynamic Amiron headphones lying about, and after switching to high gain, found that they were just as impressive. I’ve long loved the Amiron’s midrange, and the G6 let the headphones truly came to life when listening to music and watching Netflix.

I don’t always recommend leaving sound profiles on when watching movies – I tend to prefer listening to music and movies “dry,” but the SBX cinema mode was definitely worth engaging. I felt centered in an expansive soundstage, and it never felt gimmicky – except for one time that I tried to watch Kingsman: The Secret Service with Scout mode turned on. Don’t do that. It magnifies every incidental sound to the point that you feel like you’re at the circus, and not in a good way. Leave Scout mode for games.

Overall, the G6 is one of those gaming accessories you might not realize you need until you’ve tried it. Unlike graphics, it’s easy to neglect the sound quality of your rig. But for $150, the G6 dramatically – and I do mean dramatically – enhances the stock audio of most PCs and your gaming console, as long as you have a quality set of headphones for them to power.

If you’re still making due with a budget pair of headphones, though, the G6 really isn’t going to help you any more than buying a 600-pound Krell amp will boost a pair of cheap bookshelf speakers. Upgrade your headphones first, and when you have a respectable set of cans around your ears, the G6 will rock your world. And it’s even better if you frequently move it back and forth between a console and the PC – it’s like getting two high-end sound cards for the price of one.

The Sound BlasterX G6 has an MSRP of $149.99, but it’s usually a bit less expensive online. 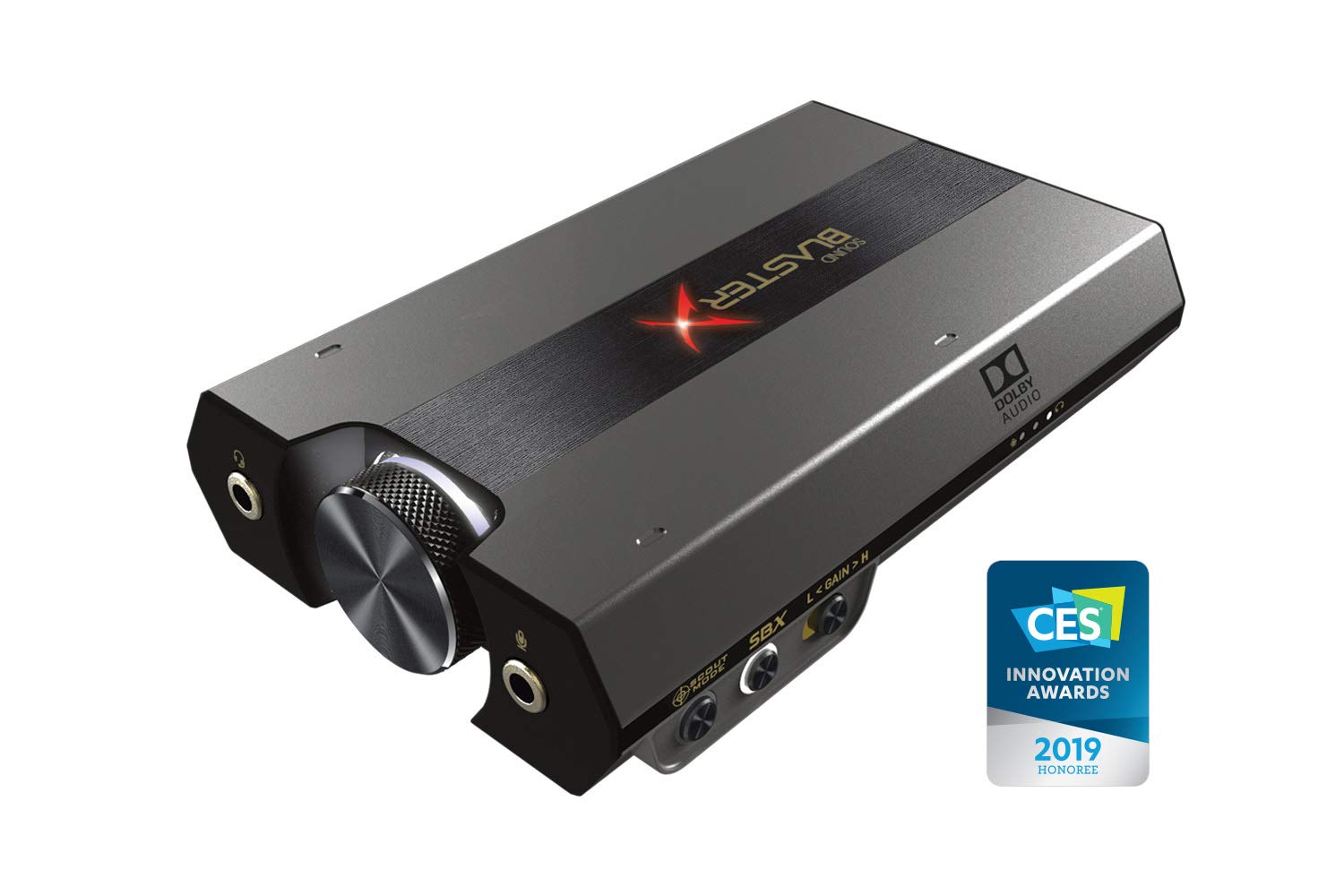 If you already own a decent pair of headphones and want to be amazed by how good they can sound, the Sound BlasterX G6 is the way to go. But beefy amplification and gorgeous surround profiles aside, getting to add Scout mode to your bag of gaming tricks makes this external sound card worth the cost of entry all on its own.