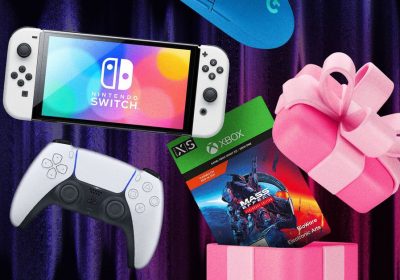 Several retailers are running Cyber Monday 2021 gaming deals right on the heels of their Black Friday discounts. While there weren’t many big gaming deals to look forward to this year with the ongoing console shortages, there were still some discounts to be found last week.

Even though Nintendo games hardly go on sale, you can find several discounts on games from multiple retailers this year. Finding a brand new Nintendo Switch OLED may prove more difficult, but as long as you’re looking for deals on Switch games and accessories, you can still find some discounts worth shopping for on Cyber Monday.

There weren’t many deals on our favorite Nintendo Switch accessories on Cyber Monday, but if you’re looking for microSD cards, you’re in luck.

It hasn’t become any easier to get a PlayStation 5 console this year. However, if you already own the console or need gifts for someone who does, you’ll still find some good PS5 Cyber Monday deals out there.

Several retailers have game deals on games for both the last-gen and current-gen consoles from Sony.

If you haven’t extended your PlayStation Plus membership recently or need a larger hard drive, now might be the best time to get deals on both.

The Xbox Series X has also been hard to come by this year. Thankfully, there are still plenty of Cyber Monday deals for the console’s games and accessories worth picking up today.

Our Xbox Series X store restock list has been one of the easiest ways of knowing when Microsoft’s console has been available for purchase. While you might not be able to buy the system on Cyber Monday, you can at least keep track of the last time most retailers had the Xbox Series X for sale.

If you want gaming discounts on Xbox Series X games on Cyber Monday, then you’re in luck. Several retailers have games with discounts, including Amazon with multiple sets of deals.

Some of the best accessory deals you’ll find for the Xbox Series X on Cyber Monday are for the system’s first-party controllers. The standard gamepad and the Elite Series 2 are discounted today.

Some of the most common online retailers don’t focus too heavily on Cyber Monday gaming deals, but there are still some discounts to be found whether you’re looking for an affordable gaming laptop or PC gaming accessories.

One online retailer that has some decent Cyber Monday gaming laptop deals is GameStop, with three great options for affordable, discounted laptops.

If you’re looking for Cyber Monday PC gaming deals and you’re a streamer, you’ll find some deals that can help upgrade your broadcasts.

Some of the best gaming monitors and TVs offer features like 4K displays, HDR, and high refresh rates. Below are some of the best deals we found for displays that will make your games crisp and smooth.