What zombie stories are left to tell in 2019?

While Days Gone reveals its “Freakers” are actually infected, mutated humans instead of the undead, their mindless shuffling and groaning could have fooled me. Turns out the world after a definitely not-zombie apocalypse still gives me deja vu with the familiar themes of “why survive if you can barely live” and “mankind is the true monster we have to fear.”

Stop me if you’ve heard this one, but maybe we’re the walking dead? Think about it.

While Days Gone horde mechanics show a pulse, the rest of the game feels lifeless. Its massive, but repetitive scope renders even those aspects I initially found entertaining a chore.

The zombies that weren’t

Everything’s already halfway to hell in the game’s opening cutscenes. Screams echo through a small Oregon town. I see people running frantically away from the feral, herd-like masses of Freakers. Emergency response personnel in hazmat suits yell about an evacuation.

Amid the scramble to escape is Deacon St. John, a veteran and local biker gang member whose scruffy appearance and hardened-yet-winsome persona reminds me of at least half a dozen other video game protagonists. After securing his wife a seat on a helicopter headed out, he travels with his fellow gang member and friend Boozer to a nearby refugee camp. All they find is a Freaker infestation and a crashed helicopter; his wife is presumed dead.

A cutscene sets a precedent for the rest of the game, focusing on the after effects of the apocalypse only as they relate to a chunk of rural Oregon. A lack of exposition leaves the fate of the rest of the world, the country, and even the remaining states in the Pacific Northwest a big, unanswered question mark.

Deacon and Boozer find work as “Drifters” two years after the incident, doing mercenary work and odd jobs for the surviving communities. This is no small feat, as the area has been overtaken by self-mutilating raider cults and the Freakers themselves, rumored to be transformed by some sort of infection.

Oddly enough, no one seems too worried about catching the virus it if they’ve already survived. No one I meet is in a rush to destroy the masses of Freakers that roam the state, and it takes around 24 hours of playtime before a character exhibits curiosity about what caused the outbreak in the first place. Everyone seems pretty willing to accept things as they are.

Instead of getting to the bottom of these questions, most communities prefer to send me crisscrossing the gorgeous Oregon countryside and rolling mountains of Days Gone’s open world on my motorcycle as I hunt down bounties, recruit survivors, and raze entire camps of raiders. Completing missions builds trust within these communities, which in turn unlocks better gear, a reward I find much more compelling than the idea of helping each camp’s one-note characters.

Most of these quests repeat a couple formulas, particularly in the game’s first half:

Days Gone never settles into a satisfying rhythm. Every so often a lengthy cutscene will unload exposition into my lap as I struggle to retain this surge of context and backstory.

Some essential characters and antagonists don’t show up at all until dozens of hours into the game. As a result, Days Gone sometimes seems remarkably sparse, while other times I find it almost intolerably bloated. Deep into the game, a drawn-out standoff looks and feels like the game’s finale, and I audibly groan in despair when my reward for the hours of battle preparation is a whole new area that unlocks the last third of the journey.

I am able to find some fun in the game’s flexibility when it comes to tackling the hordes of Freakers. Staking out marauder outposts from nearby high ledges and planning my attack, sniping enemies from afar or breaking out my shotgun after I’m spotted to end the fight in a bloody mess, brings a certain amount of satisfaction.

I particularly appreciate the unique and often elaborate traps that other communities set for me and people like me, some of which manage to tell interesting stories about their creators. Following the path to one camp’s main entrance leads me to a cave packed with Freakers who were placed there as makeshift guard dogs, while another sniper-heavy tree fort is perched dangerously close to a horde, so anything but a stealthy approach puts both sides at risk of getting mauled.

Developer SIE Bend Studio is able to provide a sense of tension by making sure ammo is scarce and limiting the amount I can carry. Melee weapons and silencers for my guns degrade with time, forcing me to be acutely aware of every silent bullet fired and ax swung. I can craft weapons like Molotov cocktails, flashbangs, and mines, but I have to establish trust with the local camps before I can gain more supplies to create them. I carefully horde my supplies until I absolutely need to use them, and even then I’m aware of how vulnerable I might be during the next battle. 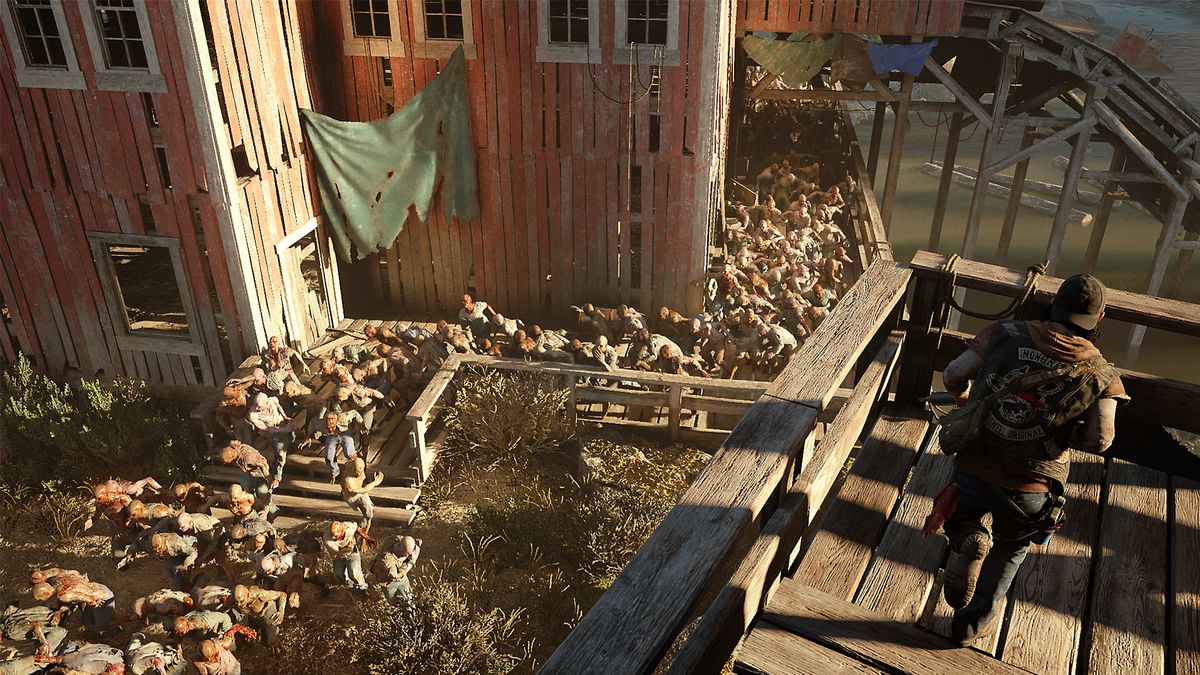 Even traveling between waypoints like Freaker nests or survivor camps is a risk. The scattered fuel pumps and gas cans I find along the way may hold infinite supplies, but my motorcycle’s gas tank can only hold so much fuel at a time. Running out means I’m forced to walk to the nearest settlement, which is a scary prospect given how many people and things there are out there that want me dead.

Days Gone may take place across a huge swath of Oregon, but my curiosity about what I can find dies a quick death in the first act. Nearly every hidden cave or decaying building I explore proves to be a location for a quest I’ll later unlock, but until then, they remain depressingly empty. My rewards for being adventurous often boil down to some extra ammo or a landmark that unlocks a dry fact about the state.

It’s a shame the game never quite makes the most of it’s definitely-not-zombies: the shambling hordes of Freakers fill the screen with writhing, frightening faces and limbs. The first encounter stops me cold, the game’s gnarly sounds and sharp score doing a fantastic job of building anxiety. I often hear the musical cues for the mobs before I spot them, my movement noise accidentally alerting them. I look for the Freakers, spotting the waves of monsters as they turn my way. It’s genuinely frightening. Well, it is until I begin to empty my weapons.

Taking out the hordes becomes even more enjoyable once I build up enough community trust to unlock the game’s heavier weaponry, and it’s at this point that Days Gone begins to feel like a strange but not unwelcome mixture of stealth and tower defense.

I need to craft plenty of traps, like mines and remote bombs, to place near the Freakers if I hope to survive these battles. Then I must find a way to attract them into my killzone, and perch nearby with as many guns and as much ammo as I can carry to finish off the surviving Freakers.

Those moments of fun and challenge are too fleeting however, and they’re surrounded by a confusing story and long hours of repetitive tasks. Like a zombie, it lurches through the motions, hungry for brains, lacking its own.