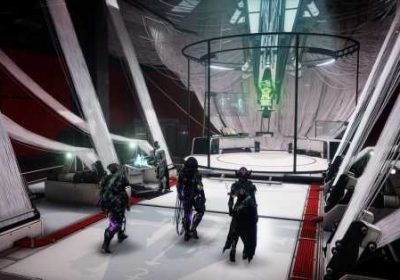 Destiny 2 season launches are usually a cause for celebration in the community, but players are already furious about Season of the Splicer’s Transmog system. People already had low expectations after its disastrous reveal a few weeks ago. But even worse, the system has turned out to be an incredible grind, taking players 25 hours to fully transform all five of the items they’re wearing.

Destiny 2’s Transmog system, called “Armor Synthesis” in-game, has three different “Synth” materials: Synthstrand, Synthcord, and Synthweave. The process starts with collecting 150 Synthstrand, which Guardians do by killing enemies in the wild or just interacting with basically any system in the game.

Then players spend all 150 Synthstrand on bounties from Ada-1, the Armor Synthesis vendor. The bounty gives players a random objective — themed after the player’s choice of Strikes, Crucible, Gambit, Destinations, or Raids. When players complete the objective and turn in the bounty, they’ll get 100 Synthcord.

Players need to “unlock” their favorite looks with Synthweave
Image: Bungie via Polygon

Guardians then need to go back to Ada-1 to turn in 100 Synthcord for Synthweave, which is color-coded based on the class that players use when turning in the Synthcord. Players then use this Synthweave to unlock their favorite armor looks, turning them into “Universal Ornaments” that can override the look of any armor piece without changing its stats. Normally, Guardians can only acquire 10 Synthweave per class each season, but Bungie is giving players extra during Season of the Splicer’s tutorial missions.

Bungie revealed this bizarre, multi-step process a few weeks prior to Season of the Splicer. The limit of only 10 Synthweave a season was the primary cause for frustration, as was the number of hoops players needed to jump through. This whole process is even more frustrating knowing that Bungie allows players to pay real money to bypass all of it and purchase an unlimited amount of Synthweave.

But after Bungie officially launched Season of the Splicer on Tuesday, players found that the grind is far worse than anyone expected.

The primary issue lies with the acquisition of Synthstrand. If you’re a Destiny player, you know that collecting 150 of anything from enemies isn’t too hard. Guardians can mow down 100 or more enemies in a single 10-minute Strike. But after some testing, players found that Synthstrand has a timer on it. Players will get one Synthstrand every two minutes of combat time — that means no AFKing on a planet or in the Tower to rack up Synthstrand overnight.

Destiny data miner and owner of Today In Destiny, JpDeathBlade, tweeted some specific details about the system and its limits.

We decided to test it ourselves and corroborated that it has nothing to do with player efficiency. We ran around the EDZ killing enemies left and right and got two Synthstrand in the span of two minutes — the first at the start of the two minutes, and the second two minutes later. For our second experiment, we killed an enemy to get some Synthstrand, AFK’d in the Trostland church for exactly two minutes, and killed another enemy when the timer went off. That second enemy dropped a Synthstrand. Two minutes apart exactly, both times, confirming that players aren’t rewarded for killing more enemies.

Active players will receive 30 Synthstrand an hour, which will give them enough to buy a bounty every five hours. Players will thankfully continue to gain Synthstrand while they’re working on their new bounty, but the bounties themselves can have some lengthy objectives.

Discounting the time it takes to complete a bounty — since players will always be earning Synthstrand — it will take Guardians 25 hours to complete a fully Transmogged outfit including helmet, arms, chest, legs, and class item. If players want to complete two outfits, or ten items — the seasonal max per class — that will take 50 hours. And players who want to Transmog all 30 items a season, 10 for each of their three characters, will need to grind for 150 hours.

Ada-1 new bounty store in Season of the Splicer
Image: Bungie via Polygon

Other games like Diablo 3 have a completely free Transmog system, where players pick up an item and it instantly goes into their Transmog collection. Players then pays the Mystic some in-game gold and transforms their look. World of Warcraft, which is an MMO like Destiny but requires a subscription, also offers armor Transmog à la Diablo.

Destiny is technically a free-to-play game, but after Bungie removed much of the game’s content last year for the Destiny Content Vault, there isn’t much to do for players who don’t own the new season or a single expansion. Bungie’s new Transmog system seems angled to make money in the store first and foremost. With an extreme grind and a resource limit, fashion-focused Guardians are heavily encouraged to purchase additional Synthweave.

This is different in a true free-to-play game like League of Legends, where Riot charges players for optional cosmetics and gives an option to spend real money on playable characters. There are extremely talented League of Legends players who never spend money on the game. But to do much of anything in Destiny 2 in 2021, players need to own an expansion or season. Worse, Bungie is treating its season and expansion-owning players identically to its free players.

Players have been asking Bungie for some ability to craft their Guardian’s look since the original Destiny. But just a few days after launch, Destiny 2’s first Transmog system is an unmitigated disaster.

We’ve reached out to Bungie regarding the controversy, but it’s currently unclear if the studio will correct the system in the future. Right now, the frustration over the Armor Synthesis system has dominated most of the conversation around Destiny 2’s otherwise exciting new season.