F1 2019: the game that gets better the longer it takes

But a full, Formula One race weekend — three practices, three rounds of qualifying, full race distance — has been my most engrossing and immersive sports video game experience of the year, hands down. Codemasters’ F1 series is the rare sports title that gets better when you play it in real time — and that includes baseball, which has no clock, and where most MLB The Show devotees play only portions of games in the career.

It’s a lot to ask — you’re talking about 90 minutes, roughly, for one race (although the ability to pause certainly helps). That’s a lot on a gamepad, especially if you’re taking Monaco’s inscrutable Hotel hairpin 78 times. But racing full length has deepened my understanding of the sport, particularly in how the car’s systems and tires are managed. And, as I’ve said repeatedly, the sports video game that helps fans understand or relate to the sport better is the one that is really doing its job well.

“In theory, playing a 50 percent race distance compared to a 100 percent distance should give the same experience, as we scale all our elements,” Lee Mather, the game’s director, told me via email. “However, the much wider window for things to change and evolve will always create more varied outcomes. Over the longer runs you’ll really experience the detail in the way the tires wear. With more laps, there will be more scope for mistakes and overtakes, all these things go together to mix things up further.” 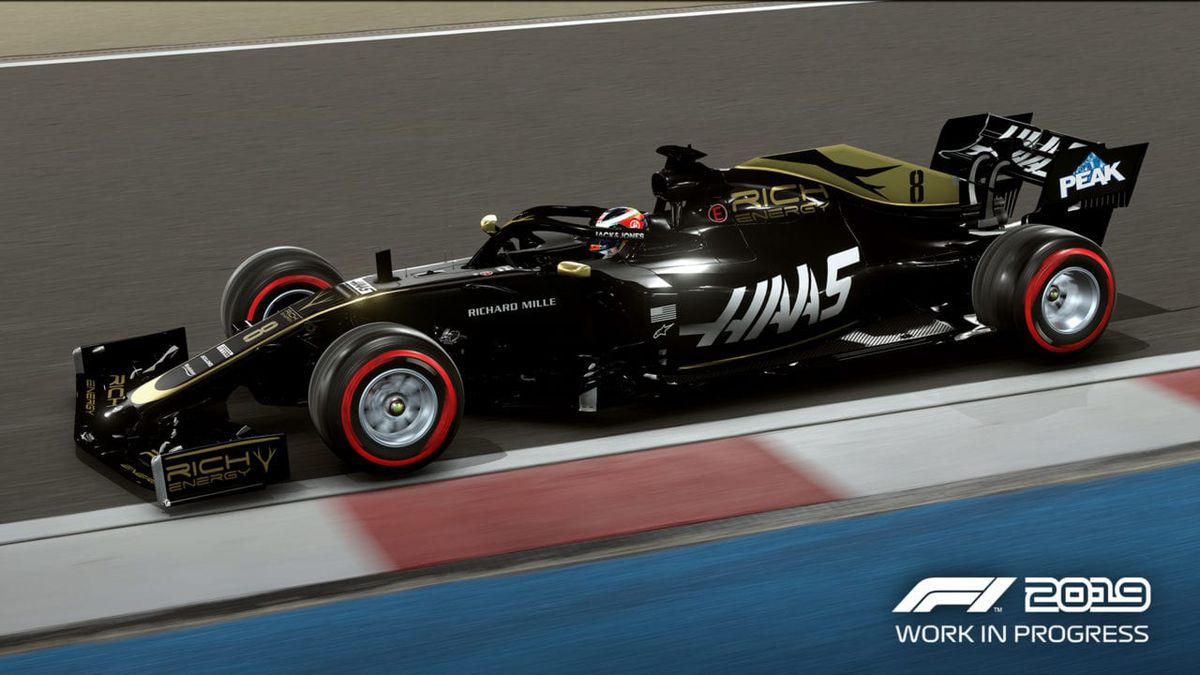 Screw you, Romain. You’re not taking my points.
Codemasters

He’s right. For example, in a half-distance race, I can overfuel the car at a very, very modest cost in time, but have plenty of gas to fend off challenges and make unlikely overtakes in rich fuel mode. At shorter distances, fuel management is even less of a concern. At full length, even a full tank isn’t enough to get the car through the Spanish Grand Prix in standard fuel mode; you’ll have to race lean for several laps to get yourself back on target, and that dictates a lot of the strategy before the first pit stop — both for the human driver and the AI.

Then the treads: I rarely paid much attention to tire wear or their temperature at half-distance or less, and with one of the backmarker teams I could easily snipe a points finish making just one pit stop if I qualified 11th through 15th. At full length, the gaps in the field really expand, such that making an additional stop but using softer (faster) tires is a viable strategy with a stronger car (thus neutralizing a fewer-stops advantage for the strivers). This is especially the case if I’m racing at a track where I’m very hard on the tires, like Silverstone.

“We create everything to cater for 100 percent distance and complete race weekends,” Mather explained. While Codemasters wants to build something that a mass audience can play and enjoy, I got the feeling that full distance is the proverbial “right way to play” if you’re talking about a design ideal.

“During the design phase we’re very clear on which elements we’ll need to scale down to offer a shorter experience where required,” Mather continued. “It’s not just the simulation elements of the game, such as tire wear, fuel usage, race length and weather, for example, but also the scoring systems in some game modes where XP or driver ratings are relevant.”

I asked Mather what portion of F1’s devoted player base goes for the full-fat experience. Mather acknowledged that Codemasters, like all developers, has considerable telemetry telling them how their players play and enjoy the game, but didn’t share any figures in his reply. But the outsize, full spectrum racing experience isn’t just limited to F1 2019’s career mode, though it is most on display there with all of the role-playing elements the series has added over the past three years.

“The way players interact with the game also differs over the course of a season,” Mather said, noting that Career is, quite obviously, “the real jewel in the crown” as far as playing time and numbers.

“We often see a lot of gamers recreating race weekends in Grand Prix Mode to mirror what’s happening in the season,” Mather said. “Then we have the competitive gamers who spend time practicing in Time Trial, racing online in Ranked Multiplayer, or entering the F1 esports qualifying rounds.”

F1 2019’s modes form a more supportive laboratory for what I’m trying to do in Career than other sports video games, too. I calibrate my opposing AI difficulty track-to-track, using the Formula 2 series (new this year) as a benchmark and then adjust that based on a lap run with my team’s unaltered, beginning-of-season car. It’s given me an appropriate challenge race-to-race, while still giving me an advantage on tracks where I run well (Austria, but doesn’t everyone?) and a tougher task where I don’t (Singapore).

When Mather plays the game for himself, “I like to sit back and play it how I would, had I not worked on the title,” he said. That means a Career playthrough with a driving wheel, for Alfa Romeo. Alfa has been a very popular choice among the user base this year, not only because of the badge and livery, but also because 2007 world champion Kimi Raikkonen took a seat on the team after wonderboy Charles LeClerc moved up to Ferrari. “In the 10 years I’ve worked on the F1 series, I’ve never started my Career at Ferrari,” Mather mused. In that regard, he’s like most of us — taking a striver team and building it up to a contender is so much more satisfying than hopping in Mercedes’ cockpit and dominating everything.

F1 2019 at its extended lengths really honors that ambition, too. If you’re driving for McLaren and Kevin Magnussen is hot on your tail for eighth place, you get very, very possessive about those four points he’s coming to take. While Career, particularly in the car development tree, has most of the role-playing elements of the game, the most role-playing I do is out on the track.

I will defer to Max Verstappen in his much stronger Red Bull Honda, but not Pierre Gasly (who in real life was demoted to Toro Rosso three months ago — a midseason change that F1 2019 can now emulate, too). When I get out to the race course, I drive in and out of the pits, rather than take flying laps in practice. I run a minimum of 10 laps each session, partly to get the development bonus in Career mode, partly because it makes the parts and gearbox wear more realistic.

And partly because I just enjoy driving a Formula One race car on my PlayStation 4. The only time I worry about my time is when I’m qualifying.

Roster File is Polygon’s news and opinion column on the intersection of sports and video games.