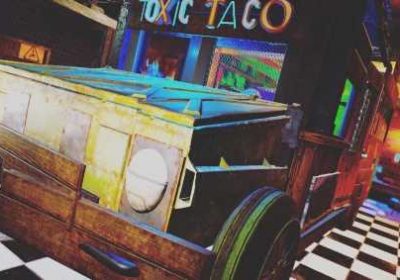 Fallout 76’s map has some cool features crafted by Bethesda, like an abandoned ski resort or a deadly water park … but the real charm of Appalachia comes from the CAMPs created by players. Many people keep their CAMP nice and functional, but other players choose to go above and beyond a simple shelter where they can repair their gear and catch a nap.

Bethesda has been supporting the CAMP feature since day one, and the building and role-playing communities have both taken advantage of recent additions. Now, while exploring the wasteland, you can find an elaborate taco truck, show up to a Mothman museum exhibit that’s run by cultists and attended by local press, or find a Brotherhood of Steel recon camp on the edge of a nuclear zone — all made by players.

There are two major changes to CAMPs that have these communities so busy building. The first is the addition of shelters, which are big underground bases that lack the item budget of CAMPs built in the open world. Bethesda is also testing CAMP slots, which allow players to build multiple CAMPs and switch them out on the fly. This means that a player will be able to build their dream home, but put it in storage and replace it with another carefully crafted building — with no alternate characters or re-logs required.

Players, especially those who have honed their skills in Fallout 4’s building mode, are able to create some cool environments that don’t initially seem possible to the untrained eye.

“For us builders, the CAMP system is the ultimate way to showcase how proud we are of our creations,” says Holly Green, a Fallout 76 role-player and games writer. [Disclosure: Holly Green has previously written for Polygon.]

“The best builds are definitely those that fit a theme,” says Green. Her in-game character is an intrepid New Charleston Herald reporter who embeds herself in the role-play wars of Appalachia. “I chose a location that’s about one block from the original Charleston Herald building, both for the symbolism and because the location is not far from a key location for the New Responders, who are the reporter’s protection and security detail while in Appalachia.”

The New Charleston Herald office has a modest place for role-players to visit, along with a newsstand and a backyard for barbecues and community gatherings. Some players will build their home right near the office, to symbolize their support for the free press.

Other players choose to build something that is pure spectacle. For instance, a player called RADRUX is the proud owner of Fallout 76’s first taco truck. Vehicles have always been rare but cool in Fallout’s lore — you only get to drive one in Fallout 2, and you’ve certainly never gotten to craft your own truck. RADRUX uses wood and metal, the game’s simplest crafting supplies, to create fun entertainment venues like his (nonfunctional, but cool) truck. He also builds clubs and bars, using his real-life profession as a DJ to inform his designs.

While RADRUX’s in-game avatar is a sinister-looking clown, he’s actually a benevolent member of the building community. He runs a Twitch channel, and hosts a show called Rux Reverse where he shows a completed project, then reverse-engineers the best parts to explain to new players how to put complex pieces together.

Some CAMPs are just temporary builds, meant to host an event. For instance, the Mothman Cult is a role-play group with one ultimate goal: The people of Appalachia must surrender their lives to the Mothman to achieve peace. Sometimes, the members of this group will go to churches or build their own cultist altars in order to draw players in and convince them of their cause.

But the Cult isn’t above reaching out to other groups. It recently hosted a weekend event at a Mothman museum, blending together Bethesda’s Mothman lore with their own order’s fiction. Green attended as a cultural reporter, and role-play groups like the Responders were invited to tour the exhibits.

These are the kinds of random events and stories that one could expect to play out in a single-player Bethesda game, but they’re all created and run by players in Fallout 76. The more Bethesda gives players tools to create their own CAMPs, the more that the game resembles the tranquility and collaboration you might see from Animal Crossing: New Horizons. It’s still the post-apocalypse, and there are blood-stained raiders, cultists, and nuke sites about … but players are having tons of fun building dream homes, newspaper offices, and even taco trucks.