The Fortnite World Cup is underway, with the first week of qualifiers wrapping up this weekend. Fortnite hopefuls wishing to compete in the $30 million finals threw their hats into the ring, and earned points to participate in the tournament. Twitch superstar Tyler “Ninja” Blevins streamed his qualifier matches, and while he did not place high enough to make it into the finals, he had an outburst that is making fans chatter.

The match, which begins with Blevins dropping onto the Fortnite pirate ship, appears to be a normal skirmish. At first he encounters an aggressive enemy, but he gets into a Baller vehicle and is whisked away. He gets hurt, but patches himself up near a campfire. Eventually the match unfolds onto Retail Row, where he encounters a rival. As Blevins dispatches the enemy, he tells him, “Suck a dick, dude. Literally, the fattest one you can find.” Blevins then mimics fellatio on a huge imaginary penis. “I want you to literally just … shove the whole thing in your mouth,” he says.

The put-down is met with praise by his viewers, who appear delighted at Ninja’s insult. “SUCK IT,” one fan wrote. “LOL,” many chimed in response. 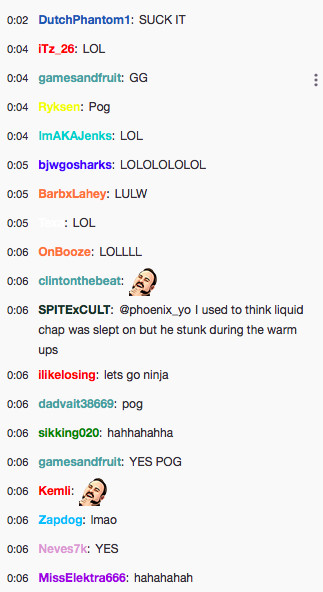 Elsewhere, reception has also been surprisingly positive. Over at r/Livestreamfails — which admittedly lives for drama — the top rated comment calls the moment a “redemption arc,” while another comment with over 1,000 upvotes says, “Thats the Ninja i know, remember and love.” One eSports outlet even calls the outburst “epic.”On Twitter, meanwhile, fans are celebrating with upbeat GIFs.

The reaction may seem strange, but there are a couple of things going on here. First, Blevins appears amped up during the match because he claims that the enemy he kills is a “stream sniper,” meaning the opponent was watching him broadcast his gameplay. It’s technically a form of cheating — the rival has an upper hand on Blevins, as he’s able to see what Blevins is doing the entire time. During a replay review of the match, Blevins pinpoints a specific soccer-skin wearing player who appears to be following him, even when it seems like the enemy shouldn’t be able to know where Blevins has gone. According to Blevins, this player had been harassing him for some time beyond that specific match, which is part of why he’s so happy to finally kill him.

“That guy chased me for six minutes, dude” Blevins says. Viewers watching and cheering as the match unfolded did not necessarily know this at the time, however, as it takes a while for Blevins to point out the stream sniping was occurring in the first place.

Most of the elation surrounding the moment is that Blevins’ demeanor has changed in the public eye. While he came up competing, he was known for vulgar tirades where he would string together a lost list of expletives toward opponents. Last year, Blevins vowed to curse less in front of his younger audience of fans, stating that his goal was to “make it like your classic SpongeBob SquarePants, where like, the parents at home can get a dirty joke or something like that, but the kids are completely oblivious,” Blevins said. At the time, Blevins told viewers that he would rate his streams so that parents could easily tell whether or not there might be controversial material in it. Blevins has also adopted “after dark” streams, where anything goes.

The news at the time was met with backlash — fans were fearful that Blevins was trying to fit in with the mainstream, even if it meant betraying his roots. While Blevins has enjoyed tremendous success and support throughout, there’s still plenty of talk about his demeanor during streams. Some fans want the “old Ninja” back, the one who would curse and scream without abandon. It’s a tension that has caused Blevins to address critics of the new, more kid-friendly Ninja.

According to the Fortnite code of conduct, players are expected to “be graceful in victory and defeat. Discriminatory language, hate speech, threats, spam, and other forms of harassment or illegal behavior will not be tolerated.” Similarly, the Twitch community guidelines say there’s a zero-tolerance policy toward behavior that “promotes, encourages, or facilitates discrimination, denigration, objectification, harassment, or violence based on race, ethnicity, national origin, religion, sex, gender, gender identity, sexual orientation, age, disability, medical condition, physical characteristics, or veteran status.”