Last year, playing Fortnite largely meant hopping onto a make-believe island in the hope of surviving against 99 other players. This year, Fortnite isn’t as divorced from the real world — there are constant tie-ins that encourage people to buy, or at least engage with brands and products. To play Fortnite in 2019 is to be enmeshed in advertisements.

Early on, the cross-promotion felt like an extension of Fortnite culture. As Fortnite blew up, its in-game dances started popping up all over the world, eventually becoming a staple of post-scoring celebrations across multiple sports. When Epic Games, the developer, introduced soccer skins and interactive pitches to celebrate the World Cup in summer 2018, the connection between the two felt natural: Fortnite is sports. Curiously, this branded integration ended up becoming a prominent part of Fortnite’s culture, as nowadays “soccer skins” are famed for being overly earnest players who try to win at all costs. The cosmetics, which are customizable, are highly desired among the Fortnite community, with players often begging for the skins to come back into the shop. The NFL skin tie-in, which first occurred in the fall of 2018, wasn’t nearly as influential in Fortnite’s day-to-day culture, but the release was popular all the same.

2018 also saw the release of Fortnite’s Avengers crossover, where players could collect the Infinity Stones and become Thanos. The collaboration may sound unusual, until you consider that it’s two of the biggest entertainment properties on earth teaming up together. If Fortnite is going to collaborate with something, the only behemoth that comes close to its cultural penetration is Marvel. It also helps that chances are pretty good that video game fans will also be into superheroes. 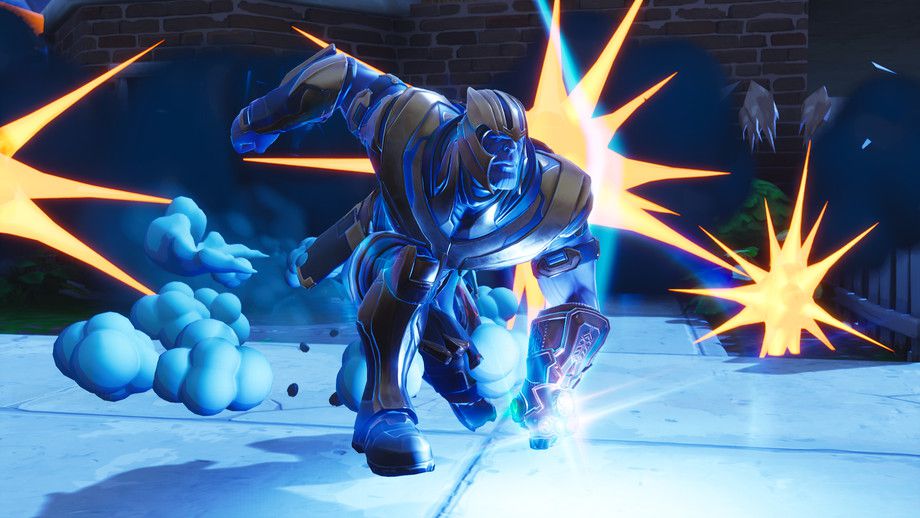 Big picture, video game collaborations of this sort is fairly common — everything from Ariana Grande to DC’s Suicide Squad have had digital promotions in the space. Fortnite’s initial integration felt different partially because of scale — soccer, football, and Marvel are huge, mainstream entertainment properties — and because the tie-ins felt organic, a reflection of Fortnite’s own cultural impact.

In 2019, Fortnite ads got more experimental — and more frequent. In February, Fortnite held a pre-recorded Marshmello concert, where players could dress up and emote as the electronic musician. The event was a separate game mode where players couldn’t hurt each other, and the arena came alive with special effects, like altering the in-game gravity. The Marshmello concert was attended by 10.7 million players, with millions more catching the show through platforms like Twitch and YouTube. The spectacle was successful because Marshmello already felt entwined with Fortnite culture, as the musician had already competed in showcase matches with other celebrities, and his tunes were embraced by Fortnite stars such as Ninja.

And then Fortnite introduced a Weezer-themed island in the same month, where fans could turn on a jukebox that played only Weezer tracks. I’m not sure anyone has figured out why this promotion happened, other than Rivers Cuomo occasionally making tweets about the game. It’s worth noting, though, that only a few weeks elapsed between the Marshmello event and the Weezer promotion, whereas there were months between the soccer and football advertisements. This has been a defining feature of Fortnite in 2019: Much of the new content is tied to real-world brands, and they are increasing in frequency.

Between the music collaborations, the NFL and soccer skins returned to the Fortnite store. The Marvel tie-in also came back in April to promote the release of Endgame, though this time, players could don classic Avengers weapons, like the Captain America shield.

In May, Fortnite started teasing the inclusion of John Wick, who eventually got a mode where players could become bounty hunters. The promotion was a hit, largely because John Wick already felt like it was a part of the Fortnite universe — in season 3, the battle royale game got a skin that seemed heavily based on the Keanu Reeves character. Despite this synergy, the inclusion of an official John Wick skin made things kind of awkward for fans who already put time and resources into owning the first skin. Then there’s also the fact that a game beloved by kids is promoting an extremely violent R-rated movie. At the same time, the integration is also a testament to how much Fortnite has blown up. Where before the game had to settle on nods and winks to other entertainment properties, now it’s big enough to just officially bring them into the fold.

As soon as the John Wick promotion was over, there was another brand collaboration waiting in tow: Jumpman. Right now, you can buy Jordan sneakers, and jump into a new limited-time mode called Downtown Drop. Players run down slopes, Sonic-the-Hedgehog style, to collect coins. What makes this tie-in noteworthy is that it’s the first time Epic teamed up with community creators, Tollmolia and Notnellaf, to develop branded, high-profile content.

“Epic games flew me out to their Headquarters in Cary, North Carolina,” Notnellaf told Polygon. “This was an incredible opportunity.”

An Epic Games representative told Polygon that the content creators were compensated for their contributions, in addition to crediting them in the mode selection screen, the patch notes, and on social media channels. Earlier this month, Notnellaf tweeted that he went to Epic Games to “secure the bag,” which is typically slang for getting the money. Players can also input Tollmolia and Notnellaf’s creator code when purchasing content to give them a percentage of transaction. And both creators can now say on their resume that they’ve worked with Fortnite and Nike — which, for a 16-year-old like Tollmolia, is tremendous.

The Jordan x Fortnite situation is a reflection of where Fortnite is at in 2019. While Epic Games develops much of the main content of the game, it also heavily relies on the community to keep things fresh. Fans can use Creative Mode to develop their own mini-games and map segments that can be included in the actual game, though Epic does not pay players directly for it. Most of this content has been a boon for Fortnite, though in the case of Downtown Drop, reception has been mixed. Personally, I found the mode hard to enjoy due to lag that made the platforming difficult. And the Jordan shoes, while stylish, aren’t very visible in-game — you can’t really see a character’s feet. Fortnite has ramped up its brand-tie ins, but the frequency of these releases makes it hard for every promotion to hit the mark. Then again, it feels crass to complain about the creation of two community members, even if it has the Jordan stamp of approval.

Advertisements are of course a fact of life, though one we can often tune out, fast-forward, or pay to ignore. And it’s hard to blame Fortnite, a free-to-play game, for finding new monetization avenues. Still, I’ve never played a game that was trying to sell me something nearly as often as Fortnite does, whether that’s an in-game item, mode, or a reminder of a real-world product. These inclusions feel hard to ignore as they are often the flashiest new content that sparks interest, as seasons settle in and the trickle of new Fortnite-specific items or mechanics slows down. And as the battle royale segment of the game continues to make questionable balance decisions, the biggest reasons to boot up Fortnite recently have been these interactive advertisements, or branded skins to add to my collection. In 2019, Fortnite isn’t just a battle royale game with building mechanics: It’s also one of the most popular and effective ways to promote a product.

Correction: A previous version of this story stated that Epic did not credit the Downtown Drop creators in-game, when in fact it did across multiple avenues. We’ve edited the article to reflect this.