Home » PS4 » In Dragon Ball Z: Kakarot, you can upgrade Goku with food, training, and the power of friendship

In Dragon Ball Z: Kakarot, you can upgrade Goku with food, training, and the power of friendship

The game tells the story of Goku through Dragon Ball Z’s three major arcs: the Frieza Saga, the Cell Saga, and the Buu Saga (as well as the surrounding small arcs like the Saiyan saga). But unlike many other Dragon Ball Z games, Kakarot isn’t all about fighting. Players can eat to increase stats, train to enhance their abilities, level Goku and friends up, complete side quests, and kick fish for new ingredients.

In addition to standard levels, Goku can eat ingredients he finds around the world or ask cooks (like his wife, Chi-Chi) to create an awesome meal for him. Eating not only grants Goku temporary stats, it permanently increases some of his abilities and grants him experience points.

While exploring the world, Goku can also pick up Z Orbs on the ground or in the sky. These orbs act as a kind currency for Goku and friends to upgrade their skills in the skill tree — like boosting Goku’s famous Kamehameha attack to level two. Some of these skills require special training, which players can only start if they spend D Medals found around the open world. 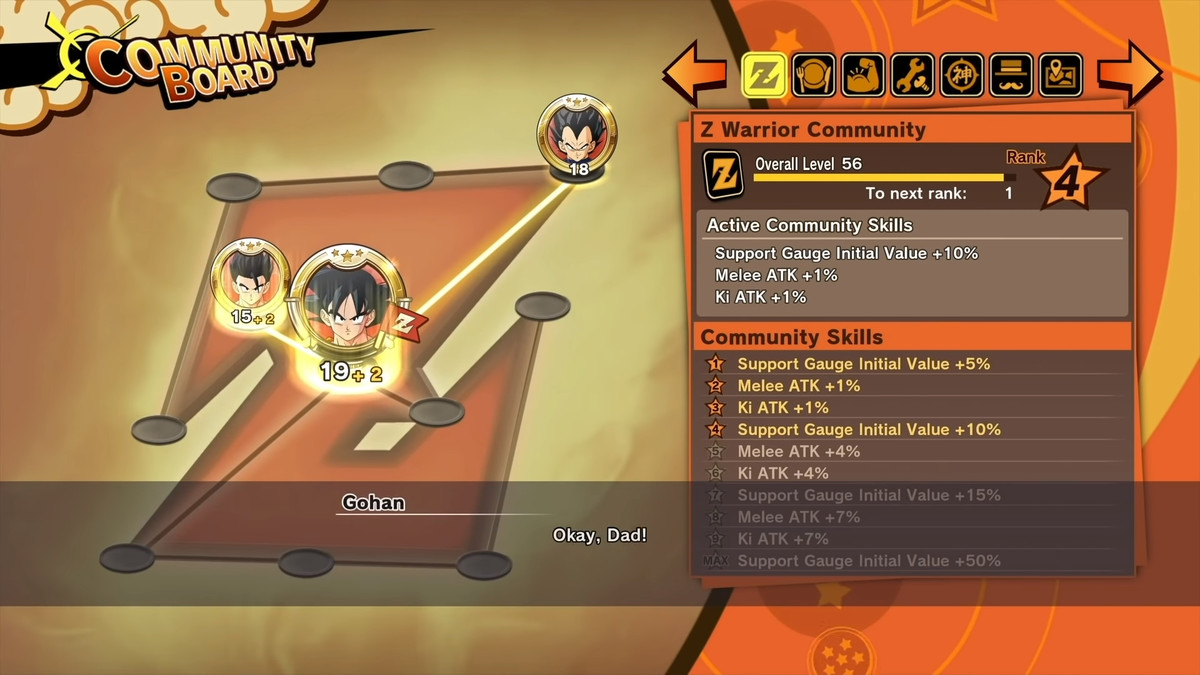 The trailer also revealed the new Community Board feature. Here, players can increase their bond with allies around the world — earning new Soul Emblems from characters like Mr. Satan or Gohan. Goku can then use Soul Emblems to increase the power of his community boards, and unlock special bonuses like increased melee attack damage.

Experienced Dragon Ball fans can also use their knowledge of the franchise to boost Goku’s Soul Emblems by connecting them with that particular character’s friends or relatives — called a Link Bonus (seen above).

Thanks to a separate post on the Japanese blog Hokanko-Alt, detailing the latest weekly Famitsu magazine, we also have an idea of how long Dragon Ball Z: Kakarot will take to complete. The post suggests it will take fans 35-40 hours to beat the game, or 80-100 hours to 100% it. We won’t know exactly how accurate that number is until the game is out, but it sounds like the game could last a very long time for dedicated fans.

CyberConnect2 and Bandai Namco will release Dragon Ball Z: Kakarot for PlayStation 4, Windows PC, and Xbox One on Jan. 17.

The PS5 Is A Behemoth For One Very Good Reason

New Narrative Adventure, Where The Heart Is, Coming To PS4