The Dark Pictures Anthology: Man of Medan only lasted about four hours during my first playthrough.

That’s not a ton of time, especially considering I picked up a copy for both me and my friend. That being said, those four hours were the most incredible co-op experience of the year for me. The experience was a perfect palate cleanser from my usual games-as-a-service titles — it was concise, clever, and creepy, and the game is still lingering in the back of my mind.

The Dark Pictures Anthology is a series of stand-alone games from Supermassive Games, the developers who made the 2014 cult hit Until Dawn. The games will be connected by the framing device of the Curator, a sinister but somewhat helpful man who pulls these tales from a shelf and shares them with the players.

In the Polygon review of Man of Medan, Austen Goslin wrote: “Man of Medan sits somewhere on the line between a Choose Your Own Adventure book and a horror movie. The game gives you control over its characters, allowing you to choose where they go, what they do, and what they say. The decisions you make for them will help them survive … or get them killed.”

Shared story mode pushes this a little further, and the end result was like a multilayered movie night that had all of my friends howling in terror and laughter.

Here’s how I approached the game: First of all, my buddy and I played the shared story mode. The way this works is that we are both active in the game at the same time, controlling different characters.

Sometimes our stories intersect, and we move through the environment together. Other times we’re doing different things, and operate somewhat independently. At one point I was controlling a diver, navigating through the wreckage of an old plane. Suddenly, above, I heard an explosion. I don’t know what happened there, but my buddy Jake was controlling a character up there and responding to — or perhaps instigating? — the action.

Not only did we each control one perspective, but we made a change that amped up the social experience: Jake and I both joined a Discord channel, and we streamed our points of view.

Man of Medan review: Fight pirates in a ghost ship, or die trying

Four additional friends piled into the channel, and switched between our streams on the fly. For cutscenes and certain sequences, everyone was on the same page. When Jake and I split up, our friends had to choose who to watch, and often rapidly switched between both of us to make sure they knew what was going on at all times. 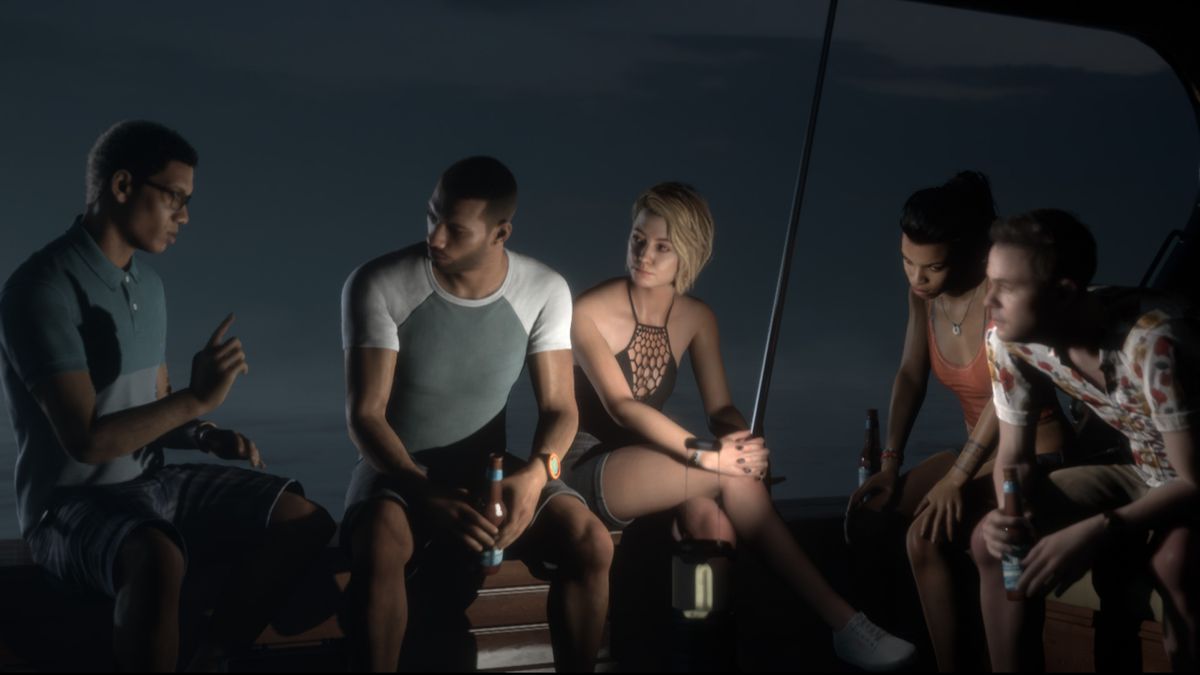 At one point, party boy Conrad was in mortal peril. Jake could have heroically sacrificed Conrad, his character at the moment, for the team … but, realistically, he wouldn’t have. And I could have locked him in with the danger as Julia, his sister … but she wouldn’t do that either. So we gave Conrad extra time to sprint through the open door, and we both held our breath in fear. We knew the decision could fuck us over, but it was the only one that made sense in the moment. It’s not the best thing we could have done, but it was the most likely decision for both characters.

We managed to get the “best” ending through a combination of various successes and failures. At one point, Jake failed a series of quick-time events. If he had succeeded, one character would have removed himself from the narrative … and that would have ultimately doomed him with the end game decisions we made. We were also able to use premonitions, brief flashes of future possibilities scattered throughout the ship, to inform our final choices. We were given the exact right amount of information; we weren’t sure who would make it out until the final cutscene, and only then could we exhale.

There was one particularly thrilling sequence where our characters were interacting, and due to hallucinations, we weren’t aware of it. I nearly killed Jake then, and he could have killed me just as easily. Jake and I didn’t know what was happening, but our friends did. They rapidly switched streams back and forth, the sequence becoming more and more tense. Crucially, they kept us in the dark. It was more fun for them that way, but in a neat twist, it was more fun for us that way as well. We didn’t need to win, we wanted to have a fun, interesting time. That changed the rules of engagement in real-time, in a way that felt unexpected and fascinating.

It’s difficult to explain what makes Man of Medan’s shared story mode so compelling without spoilers, but the social element is what makes the game sing. While the game has a party mode that allows the players to switch the controller for different parts of the game, shared story is a far more engaging social experience, as long as you have friends who are willing to throw themselves into the experience. We were playing not one, but two unreliable narratives, and our friends essentially got to watch a two-perspective movie, with complete control over their cameras.

And having spectators in the chat amplified the social atmosphere. At one point, everyone was watching Jake’s stream, because it seemed more interesting. My point of view got hit with a jump scare, and I screamed over Discord. Everyone jumped to attention and Discord blared to life. “What happened?! Did you die? CASS?!”

In Man of Medan’s shared story mode, I felt more like a director than a player. I was controlling the action, and putting on a show. The end result was one of the most memorable and fulfilling experience of the year, and I’m eagerly looking forward to the next installment in The Dark Pictures Anthology.

And while our run only lasted four hours, I ended up chatting with colleague Austen Goslin about the game afterward. “Wait,” he said, “you had a nice Alex? I did four runs and Alex was always kind of an asshole.”

We tried to puzzle out the factor that changed Alex so dramatically, and couldn’t quite nail it down. Then, Austen asked what I thought about a specific room with a spoilery twist.

“What room?” I asked. “Austen, I never saw that room at all. I have no idea what you’re talking about.”

“What?” Austen was surprised. “You saw [another spoilery scenario] instead?”

I’m already itching to dig back into Man of Medan, and uncover more of the ship’s mysteries. It’s rare to find an experience so carefully crafted to work from multiple points of views, and if Supermassive can consistently pull that off, I can see my crew gathering for Dark Pictures Anthology nights like clockwork as they are released.

Games Inbox: Where’s the best place to buy a PS5?