NBA 2K20’s gameplay reveal for the WNBA is met with sickening, saddening mockery

I’ll be honest: My first reaction, just to the headlines, was “Oh come on.”

A 2K Sports blog post going into greater detail about WNBA players and teams, who make their debut in NBA 2K20, was met with instant, unwarranted rejection and a very ugly middle finger from a lot of fans. Yeah, but, come on. I thought. You can go to Reddit or to social media and find any jackass to make a nasty, bigoted remark about anything. It’s not peculiar to video gaming, either. Look at the times ESPN has put a woman in the announcing booth — as lead play-by-play, not a sideline reporter — and a few idiots with a combined 221 Twitter followers are making sexist cracks about sandwiches and kitchens.

But any informed and honest view reveals that, no, this was rancid and widespread enough to warrant indignation. Here is a meme shared on Twitter that the mods of the NBA2K subreddit spent a lot of time removing (among others).

There’s a ton of “don’t care” memes. And there’s a lot of oblique jokes about layups and fundamentals, which is another belittling way to say the sport, its players and fans don’t deserve any respect. That’s in the comments underneath the official blog post on 2K Sports’ Facebook page. Yes, this cretinous stuff is called out by some fans, and no this is not representative of every single gamer in a community of millions. Still, look at which ones have the most thumbs up and ROFL faces. 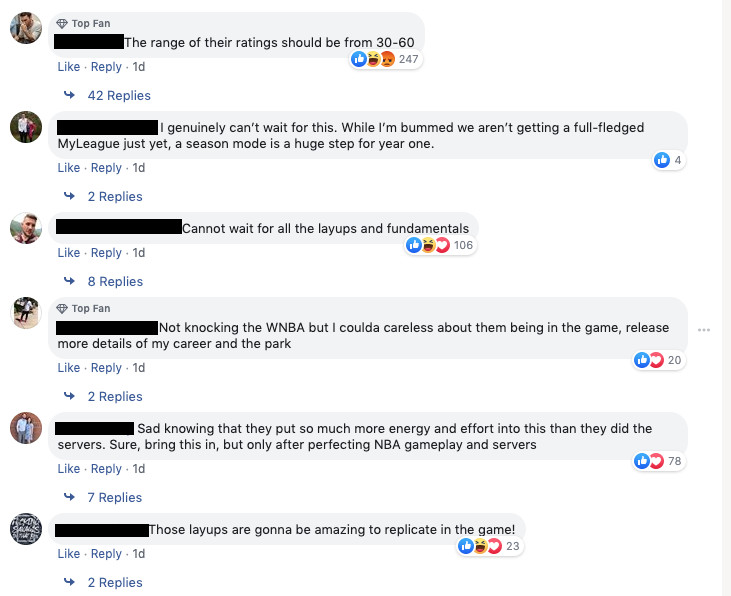 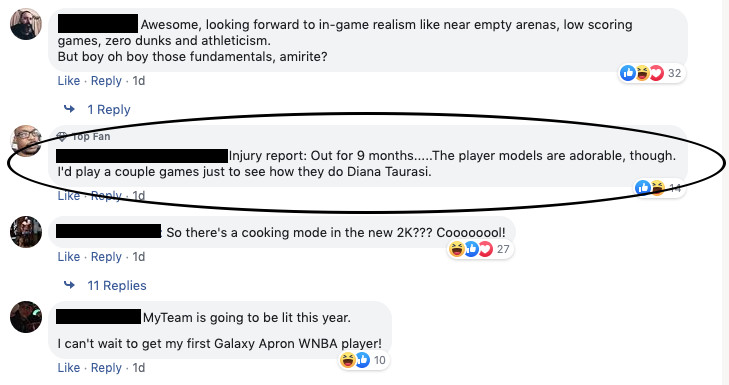 Note also how many experts say WNBA teams and players are fine, but only after they perfect the servers (whatever that means), only after more depth is added to MyPark, MyLeague, et cetera.

Kotaku correctly notes that when WNBA players were first added to NBA Live 18, the response was mainly supportive. It’s very hard to find this kind of vitriol, and any shade thrown at it was mainly because there was so little for those players to do, on closer inspection. They got a lot bigger boost in last year’s game.

Since the opinions of male sports fans take primacy, fine, here is mine: It’s very hard for me to take seriously consumer criticisms about iterative development and microtransactions when a huge developer of a massive sports franchise adds 12 teams, more than 100 players (with ratings, signature moves and attendant animations) 24 uniform combinations, a meaningful playbook for it, and the community responds with an Andrew Dice Clay monologue and goalpost-moving blather about how the WNBA takes something away from bigger priorities. The game isn’t even out but somehow, because everything has to be a zero-sum view, there is no way NBA 2K20 could have added the WNBA and still given, I dunno, a crisper jab step for Paul George.

Madden NFL 20 just put in a career mode that has a two-game preamble featuring eight college football teams, and people swooned. Nobody said that took away from other priorities. If MLB The Show’s makers decided their next big play was to give you winter ball and the Caribbean World Series, especially in a career mode, nobody would groan about being forced to attend diversity training or make racist jokes about those players. They’d probably, like I did with women’s basketball players in last year’s NBA Live 19, be grateful for the chance to think about a sport they love in a different way.

Every year people run their mouth how this year’s game, whether that’s FIFA, Madden or NBA 2K, doesn’t have anything new to offer. God forbid, Visual Concepts and 2K Sports actually do give us something new. They’ll be thanked with cracks about button-mapping kitchen chores.

Basketball is my worst sport, as a video game player, as a fan, as a writer, everything, because there is so much I do not understand about it and just never will. I wouldn’t call the NBA 2K series exclusionary but I also wouldn’t say it’s the most accessible mainstream sports phenomenon. The granular level of play it’s achieved is simply mesmerizing, but it’s also a little intimidating. I look on the WNBA as a way for me to think about professional basketball in a different way, without trying to survive and develop in a virtual blacktop league that is just as cutthroat and challenging as the best courts in real life. That’s how I felt about WNBA players in NBA Live 19 last year, where I spent more time in multiplayer as a created woman than doing anything else.

So, I am fired up for NBA 2K20 because making an effort to include new audiences means people like me also have a new chance to learn what the fun is all about. Why can we all not just agree that’s a good thing, and if it’s not the way we want to engage with the game, enjoy the parts where we do.

Note: An earlier version of this post contained two screenshots of Facebook users commenting under their real names. These images have been replaced with those names blacked out.