Home » PS4 » Only Fortnite could pull off a total blackout

Only Fortnite could pull off a total blackout

Usually, when you hear that a game is down, it’s never for a good reason. Maybe the game’s servers are overloaded, or these’s some critical bug that isn’t allowing players to get back into the action. But today, Fortnite went offline on purpose. As of this writing, millions of people are queued up on YouTube and Twitch to watch absolutely nothing happen.

There’s just a black hole, which sucked the entire map into its event horizon. And waiting. Sometimes, there are numbers which appear over the black hole, but mostly, everyone is waiting. You can’t get into a match of any sort right now. Fortnite’s Twitter account, Instagram account, and seemingly every social media channel has either been wiped or been blacked out. People don’t know how long all of this is going to last, but the fact remains the same: A video game is going out of its way to make sure people can’t play it. It’s a move that signals confidence in the game’s ability to rebound whenever it comes back, and that’s especially noteworthy given that the battle royale game has spent months being disparaged by fans.

All things told, season 10 was a rocky one. Hardcore players hated the inclusion of mechs, and much criticism was levied toward the game’s lack of balance. It was as if a cloudy haze followed Fortnite — after a year of being on top, it seemed as if some devotees were getting fatigued of the battle royale game’s direction. The game has still been wildly popular in 2019, but there were signs that its explosive growth was winding down.

But if you look at the chatter around Fortnite now? It’s as if none of that happened. We’re back into hype-land with Fortnite, and that’s partially helped by all the leaks and teases leading up to this moment. The leading theory is that the black hole will eventually turn into another map that will perhaps include new mechanics — one leaked image, for example, shows boats, a type of vehicle that Fortnite currently doesn’t have. There’s good reason to believe that when Fortnite will come back, things will be very different, else the game would have just changed some points of interest as it usually does and then been done with the last season.

Fortnite Chapter 2, as it’s being called by fans, could mark a new beginning for a game that consistently finds ways to keep things feeling new. I’ve never seen anything like this in a game before — perhaps the closest comparison is Taylor Swift, who, in 2017, deleted all of her social media to promote an upcoming album. It was a risky move, especially considering how huge Swift is on social media, but the gambit worked. People started talking.

That’s exactly what Fortnite is doing right now, at least within the game itself. As social media posts stack upon each other, with everyone asking what’s happening or when the game is coming back, Epic Games has remained mum. There’s no explanation on Fortnite’s social media channels, or Fortnite’s blog. The only thing we have is what Epic Games warned us of before the event started:

I’m guessing Epic Games won’t be saying anything for a while. Instead, Fortnite’s social media channels have updated to prominently display nothing: 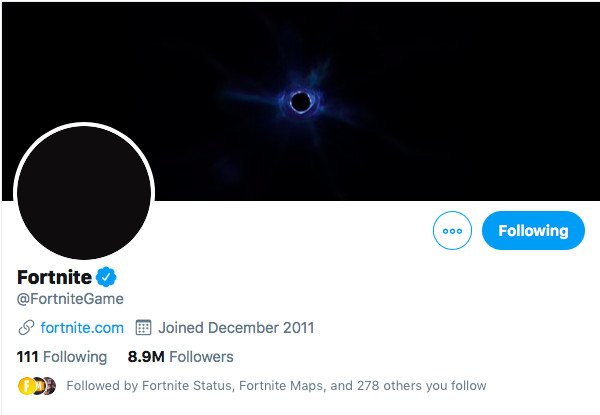