Red Dead Online’s latest update has made a huge difference

I have a Red Dead Redemption 2 save that’s just sitting on my PlayStation 4. It’s a campaign that’s been saved where the gang is in Rhodes. I just went fishing with Dutch and Hosea. Everything is peaceful, and nothing has gone wrong. If you tilt your head and squint, it’s almost as if the game has a happy, serene ending where nothing changes and everyone wins. The dream of being an outlaw gang just lasts forever, profitable and sustainable. That save has become less valuable to me in the wake of Red Dead Online’s most recent update, because the game’s multiplayer mode now captures the same fantasy.

Me and my gaming crew, which can range from about four to eight regular players, have been playing Red Dead Online since launch in the same posse. In the game’s beta phase, this didn’t always connect. It often felt as though we were in a theme park, one step below Westworld. The west was largely empty, except for a few invincible NPCs who handled distributing quests, selling items, and serving booze.

Add in the hostile element of the player base, and things got even sillier. Standing in town would often be interrupted by an instant headshot from another player, or a posse of ne’er-do-wells rolling through and gunning everyone down. It lead to a messy, chaotic environment that was less Westworld and more of a pre-game PlayerUnknown’s Battlegrounds lobby.

To Rockstar’s credit, recent updates to the game have largely solved these problems and set a much better foundation for future growth. There are now “playstyles,” which can be toggled between Offensive and Defensive from the player menu. An Offensive approach is the original gameplay style, and opens players to attack at any time. Players who attack other players are marked as increasingly hostile, racking up bounties and becoming increasingly visible on the map. 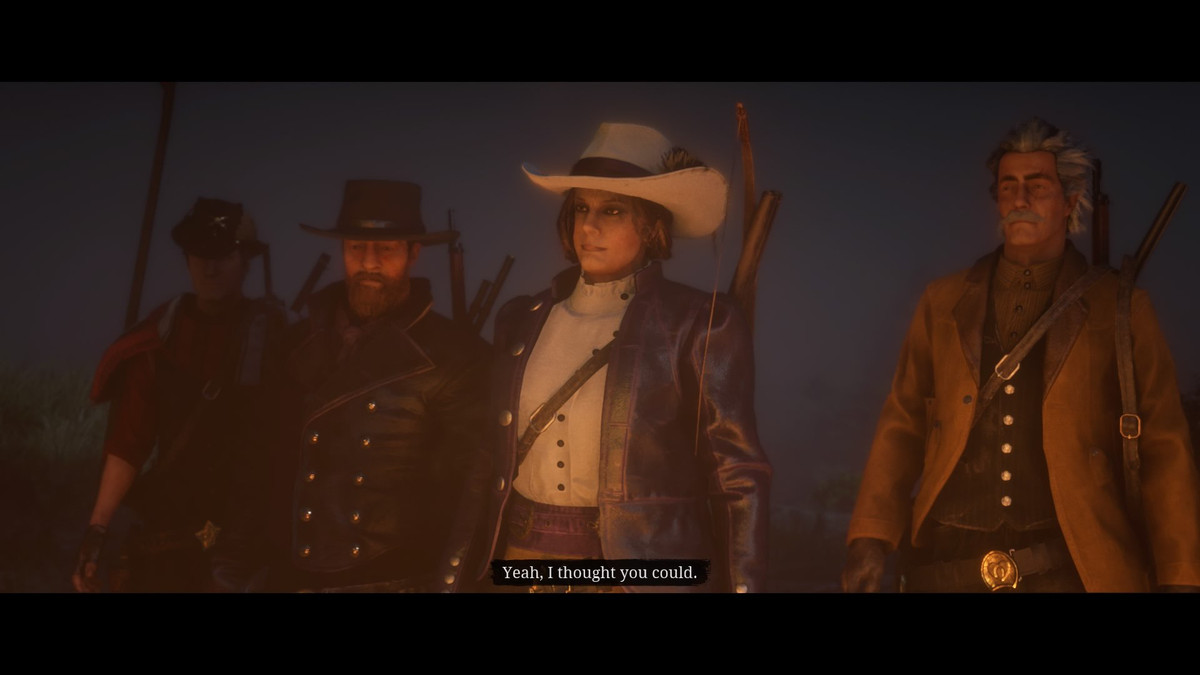 The Defensive approach reduces the chance to be one-shot, prevents a player from being lassoed, and opens up a more placid and peaceful frontier. Combined with the hostility system marks trouble-making players, and the fact that the map now hides most players from view, it’s possible for the in-game world to feel like a natural ecosystem to explore and enjoy.

Now, when I encounter a cowboy in the wild, the encounter is a surprise. If I’m in Defensive mode, I know I won’t get immediately murdered. If they’re marked as hostile, I know I can be in for a fight. It makes for a far more interesting and compelling social system, much like discovering another player in titles like Day Z or Sea of Thieves.

There have also been a host of open-world improvements, including random events on the road. Random events are more likely to trigger when your posse is moving as a group, and that gives us an incentive to stick together (as opposed to running off, splitting up to buy ammo, or rushing to the objective alone to grab a bathroom break).

After going through the campaign missions, which exist in their own instance and are similar to Grand Theft Auto Online’s heists, we take to the roads. I was struck by how much the experience of us sticking together on roads, listening to the thunder of our horses’ hooves and chatting to each other as we rode, mimicked the single-player campaign’s dynamics. Arthur rides with his companions, and they shoot the shit or talk about plot developments. Now, it’s our gang taking to the road and chatting.

Often, we’re rewarded with a random event. One humble man sits by the corpse of his beloved horse, begging for help. When we dismount and talk to him, he admits that he killed his horse. It was a trap! Bandits pour over the hills and we are forced to defend ourselves. Another time, we find a pleasant lady who says that she’s owed 12 dollars by a relative in Armadillo and she intends to collect it. We briefly debate among ourselves whether it’s worth diverting from our original course of action to ride from Rhodes to St. Denis, but we decide it’s only proper to help a lady out. We take her to Armadillo, and end up playing on the western side of the map for the rest of our session as a result.

Since we travel and take new routes, we’ve found ourselves doing new things. If a daily objective takes us to a bar to eat some almonds, why not stop at the tavern in Armadillo? And when we’re full of drinks and laughing over voice chat, it’s easy for things to evolve into a bar brawl between our characters. Sometimes, we don’t even take to the frontier in search of action or justice. We dress up in our finest garb and play poker in St. Denis. 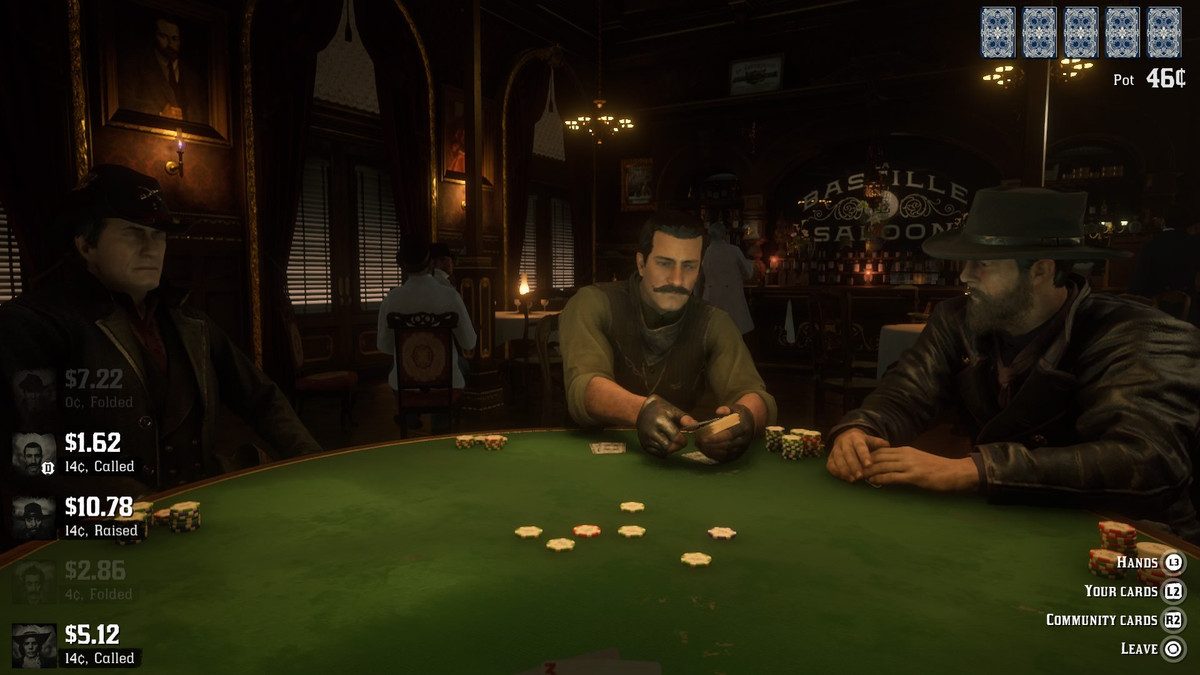 All of these new additions are best enjoyed in a group of friends, especially if those friends have already bought into the cowboy fantasy of Red Dead Online. We’ve created little backstories for all of our characters that have existed since day one — now, we just have more of an arena in which to exercise them. For those who play alone, that social element isn’t there, and finding friends in the world can be a tough endeavor.

While this game sings with friends, the new showdown and race modes are fun in and of themselves. There are various new modes added on a regular basis, like the battle royale-style Gun Rush. Gun Rush was fun, if flat, but it works much better as part of an ongoing rotation. The new showdown mode, Last Man Standing, improves on the Gun Rush formula by forcing players into cramped spaces and promoting a faster cadence. Variety is the spice of life, and by adding new modes and iterating on old classics, Rockstar can expand the content in this game at a decent clip.

Red Dead Online isn’t perfect yet, but the newest improvements show that Rockstar isn’t going the path of Grand Theft Auto Online. Instead of spectacle and flash, the game’s latest patch is focused more on telling stories and grouping up as a gang. The future role-playing system that is set for this summer should further expand on that fantasy, giving players a way to occupy the world that isn’t an outlaw of some stripe.