Respawn announced the addition of a ranked mode to Apex Legends at EA Play 2019. The idea behind the ranked mode is to create better quality games, by matching together players of similar skill levels. But until today we didn’t have many details on how the mode would actually work. On Monday, the day before season 2 launches, Respawn released a post detailing how Apex Legends’ ranked mode will work.

The mode will have six different Leagues that players will have the chance to climb through. Each rank will have four divisions. Every player will start out in Bronze IV, the lowest rank and the lowest division. From there players will have to earn Ranked Points (RP) to rank up. The ranked Leagues start at Bronze and go to Silver, Gold, Platinum, Diamond, and end at Apex Predator, which has no divisions.

The entry fees are as follows:

Because each match you enter has a cost, it is possible to lower your rank, but only by division. This means you could go from Gold III to Gold IV, but not from Gold IV to Silver I.

To rank up and enter new Leagues, you’ll need to earn a certain amount of RP. Here are all the RP amounts for each rank for season 2: 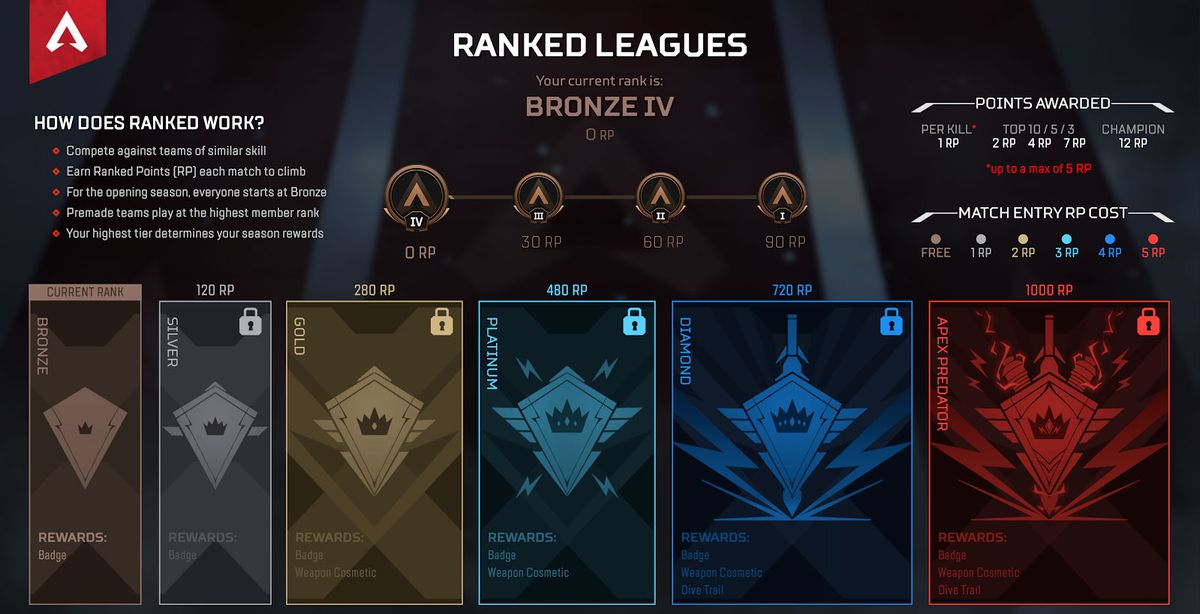 Apex’s ranked system will use a rank-based matchmaking system that attempts to put players of similar ranks together. There will be a range, like Silver players being in matches with Gold players, just to keep queues timely. If you’re in a group, the group’s matchmaking rank will be based on the highest ranked player in the lobby.

Respawn also briefly mentions that there will be certain rewards for performance in ranked mode. The only rewards the post talks about for now are badges based on the rank you finish the season in, but it does mention that it’s possible there will be other rewards in the future for high ranked players.

Apex Legends’ ranked mode will be broken into segments that Respawn is calling Series. The first ranked Series will begin on July 2 with the release of season 2 and run for the full duration of the season, ending in September. Future Series may or may not run exactly parallel to the content seasons like this one.