The effort being put into accessibility options for AAA games in 2019 has been inspiring.

Many bigger companies seem to have realized they will sell more units of these big blockbuster titles if they are more accommodating to everyone who wants to play. Where once there was a desert for disabled players who wanted even the smallest bits of assistance, now there is a flourishing oasis of games that go out of their way to help.

And that includes the recent mega-hit Borderlands 3.

Borderlands 3 begins with options, and then keeps going

There are decisions to be made about how to play as soon as the game boots up. The standard brightness controls are joined by options for subtitles for speech, as well as sound effects and atmosphere. I can choose the size and opacity of the text boxes, making them easy to read for a variety of folks with limited eyesight.

The most important part was that these functions were front and center, easily skipped if defaults are preferred, but letting players who may not normally seek out assistance be aware that there is a lot that can be tweaked. 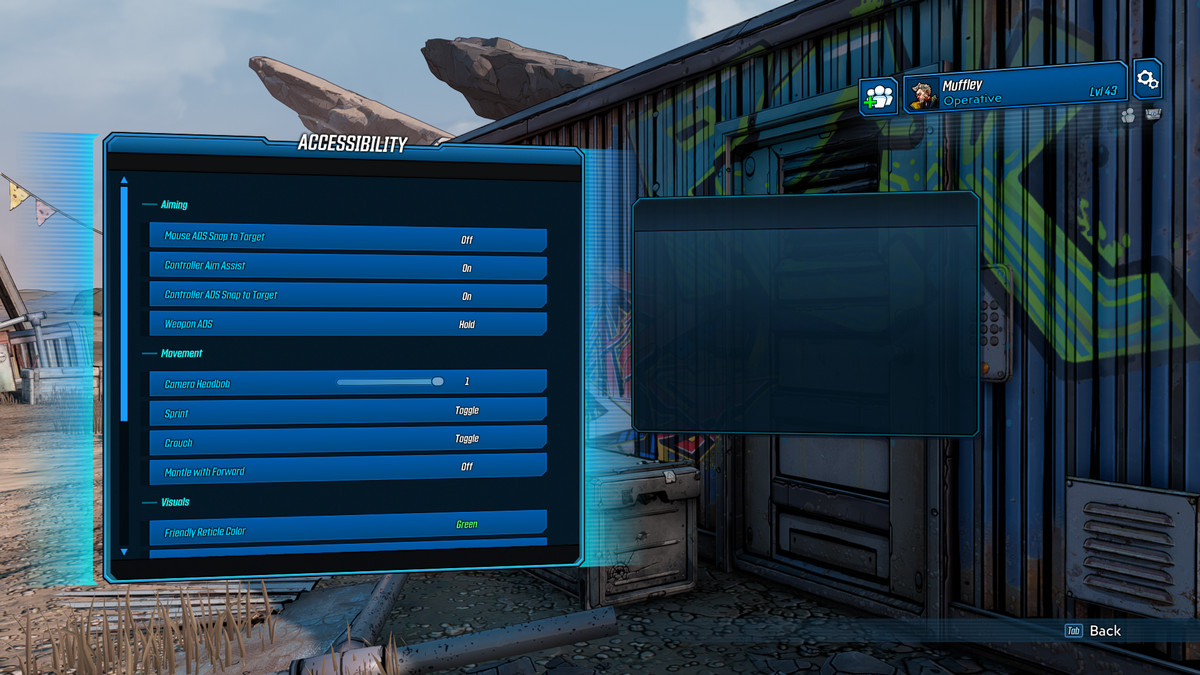 Some of the accessibility options in Borderlands 3
Gearbox/2K Games

Having options is important, but making sure that they are visible and easy to use also goes a long way. It also helps to normalize the idea that this level of assistance should be the standard, not an exception. You’d be shocked at how many people tell me they may not consider themselves disabled per se, but they take advantage of these options and benefit from them.

Furthermore, actions like sprinting, crouching, and mantling can be performed by holding a button or tilting a thumbstick down instead of pressing it in. Being able to enter and exit these movement variations with more control is not only helpful to those with particular motor function issues, but may also come in handy for players who want to perform the actions without relying on the click inputs to register, helping to retain momentum for players who want to rely more on their hand coordination.

I’m also elated to see the option to disable head bob becoming a common toggle, as the movement causes the camera to move up and down erratically during actions like running or sliding. These movements, however, can cause players who struggle with their eyesight to lose focus on the action, or may cause motion sickness. For me, personally, it just negatively impacts my ability to see what’s going on in general, and aim in particular.

Gearbox took it a step further with a single “on” or “off” switch, as well. “In Borderlands 3, we introduced a scaling option for headbob, which allowed players to tone-down or completely turn off the feature.”

The Borderlands 3 team also found inspiration in the accessibility options of other games.

“For example, Minecraft’s closed captions immediately come to mind,” Andrew Bair, lead UI programmer on Borderlands 3, told me, “Not only do they alert the player to potential danger or treasure nearby, they also provide a direction as to where the source is coming from.”

Seeing the phrase that something has “ignited” in the captions of Borderlands 3 often saves my life, as I sometimes have trouble seeing if a random enemy is shooting at an explosive or spotting a grenade as it flies across the screen. This mixture of text and icons makes for a great alert system.

Borderlands 3 also has its version of the ping system, a mechanic that is proving to be invaluable for any sort of online play. Pinging allows targets to be highlighted and show up on the minimap of your team, meaning those with hearing, speaking, or vision problems have multiple ways of directing the attention of their teammates, or getting information from those same players.

The problem is that the symbols are big and bold, making it tougher to see the enemy or item in question. Some fans have already said that this particular ping system would be better if the opacity of these markers could be set, allowing for them to still be highlighted but letting the original item show through.

Level syncing is also something that few people associate with accessibility, but it’s an absolute godsend to players who need to lower the difficulty for various reasons to get through the campaign. They will no longer have to worry about that decision affecting their online partners, as each player can operate at their own chosen degree of challenge. This is a huge boost to anyone concerned that some players may not want to go into battle with vault hunters not at their skill level, or who aren’t able to physically perform as well as their teammates without assistance.

With the difficulty levels being set for the individual, I no longer have to worry about how many people I may have to explain my lack of vision to as I play, a situation that can often be uncomfortable. Instead I can just my own difficulty where I feel comfortable, and the game takes care of the rest if I’m matched with players who like to experience the game on a higher difficulty level.

Borderlands 3 offers up a few things that feel new — even if they are tweaks to older systems — that I wasn’t expecting. There is a ton of loot out in the Borderlands and sorting through it or figuring out what is important can take some effort. Like many games, important items are denoted by color, with different colors meaning different things. Rarity is also now spelled out on the loot card for those who have trouble with colors, but, even cooler, each rarity type makes a certain noise when it’s dropped.

It’s a feature that most won’t need, but it is something that shows the developers are trying to get important information to the player in many different ways, helping communicate what’s going on to everyone, not just those of us who may struggle with our vision or color blindness. 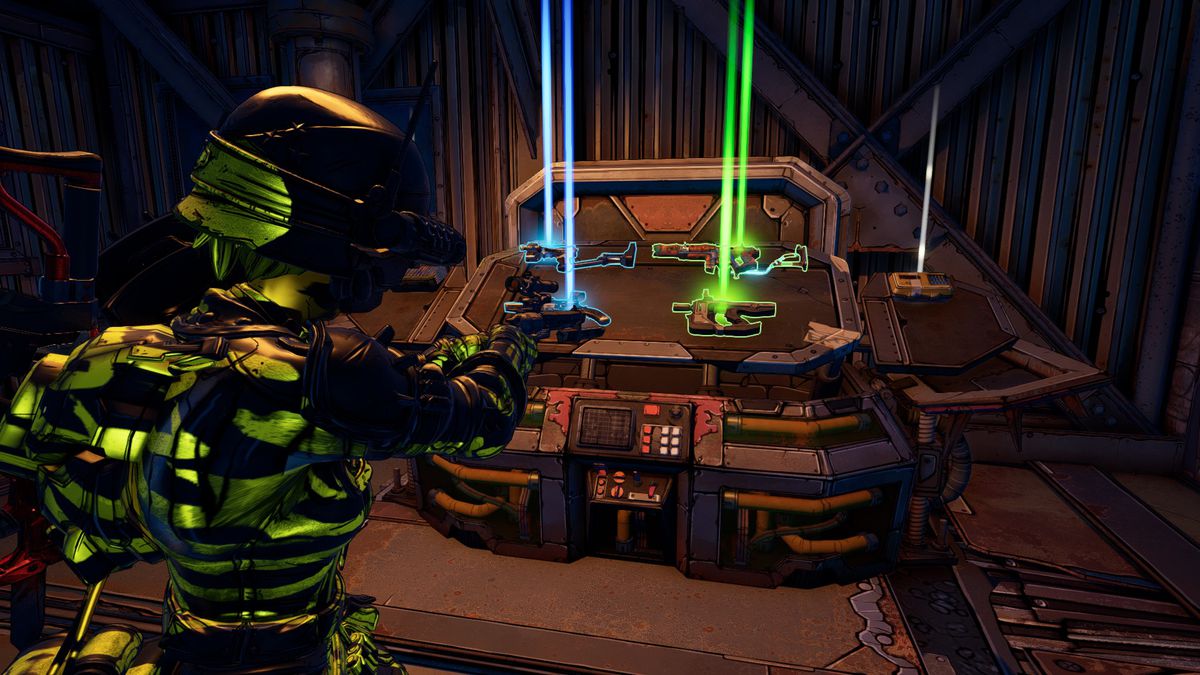 The option to scale up the HUD size seems like a smart touch, helping me to identify numbers for ammo and grenades while making it easier to keep track of my life and shields, while new quests have a giant yellow exclamation point above them, so they’re harder to miss.

And speaking of missing, my favorite thing might be the ability to change the reticle color, designating what hue the crosshairs change to when hovering over a friend or foe. It is especially useful for people with specific types of colorblindness, but for others such as myself I found it helpful to always know what color I was looking for, to see if I was aiming at an enemy. My reaction time can be slow enough, anything that speeds it up is welcome.

Not everything comes up roses in the wasteland. Shooting the right target is important and Borderlands 3 offers a helping hand when taking aim, but Gearbox’s version of the aim assist tool isn’t nearly as effective as it has been in other games.

Bair attempted to explain a bit more how it worked: “So there’s two parts to our aim assist strategy; snap-to-target, which is exactly what it sounds like, and is triggered when the player aims down their sights. The other part, the stickiness you mentioned previously, only occurs when the player is moving a thumbstick over an enemy, slowing down the crosshair so that the player has an easier time reacting.”

Many times I would test it to see how close the crosshairs would need to be near a target before snapping to it or offering some other type of help, but it often felt like nothing was happening at all.

The distinctive art style of Borderlands looks excellent and helps the game stand out, but can be hard for me, and many others, to see in general, as colors blend together and the pastels make it easy to lose sight of moving objects. This hyper-stylized setting throws a lot at the player, and identifying important items between the massive amounts of junk can be difficult.

“When it comes to the art style outside of UI & FX, we made some improvements, like a subtle glow from certain enemies’ eyes that helps in low-light situations, and additional settings for calibrating the visuals,” Bair explained.

Even games that handle accessibility well can be iterative, and each feature can also be made better for the next release. As Gearbox has discussed, the team was inspired by other games, and hopefully developers will be paying attention to what works, and what may still need help, in their own game after playing Borderlands 3.

Bair seems aware that they can’t cover everything and may not have all the insights necessary yet, but this feedback is something he said they’d be monitoring as it works on its next title. The good thing to see here is Gearbox was mindful, taking steps to not only borrow accessibility options from past games but to try and improve on them, and create new things to help anyone who wants to enter the Borderlands.

The result is a game that’s much more enjoyable, for many more people.