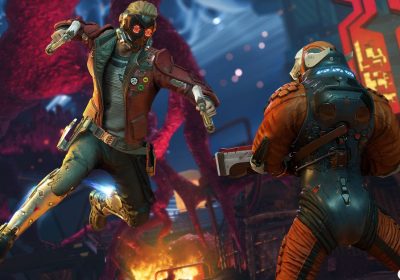 Years after Eidos-Montréal’s Guardians of the Galaxy game was leaked in 2017, the Deus Ex developer is finally ready to show it off. Publisher Square Enix announced Guardians of the Galaxy, a single-player, third-person adventure game made in partnership with Marvel — part of a multiple-game agreement that included Marvel’s Avengers — during its E3 2021 presentation on Sunday.

Guardians of the Galaxy is coming to PlayStation 4, PlayStation 5, Windows PC, Xbox One, and Xbox Series X on Oct. 26.

The game draws from existing lore — the movies and comic books — but is a new interpretation of the gang. This is not a movie adaptation, which is quickly noticeable once you’ve seen Guardians of the Galaxy leader Peter Quill, aka Star-Lord, for the first time. He’s not the recognizable Chris Pratt character from the movies; he’s more comic book-inspired, with coiffed blonde hair and the iconic red leather jacket, studded with ’80s pins and patches.

Pratt, while a beloved iteration on the character, wouldn’t have worked here: Eidos-Montréal wants players to feel like they’re Star-Lord, that they’re the character leading the band of misfit heroes. For its version of the team, that’s Rocket, Groot, Gamora, and Drax. (Other characters do make appearances, like Mantis, judging from the clips shown during our preview.)

Like with Star-Lord, these characters are specifically Eidos-Montréal’s versions — pulled from franchise inspiration but not entirely based on any one iteration. It’s always using the essence of the characters, and creating something from there, Mary DeMarle, Eidos-Montréal executive narrative director, said. The story is also a new tale from the team at Eidos-Montréal. During some hijinks the heroes for hire accidentally set off a string of incidents that could turn cataclysmic, all set years after “a massive galactic war.” (The war doesn’t appear to be the Infinity War; Eidos-Montréal called it The Galactic War.) They’re the only ones who can fix that mess, taking on a suite of Guardians of the Galaxy villains — some recognizable, and others not so much, like Lady Hellbender.

Guardians of the Galaxy is built around team dynamics, though players will only control Quill. As the leader, the player will direct and call shots on team movement and combat. Fighting is fast-paced, with each character having their own unique abilities. Though the player is directly playing as Star-Lord, he can take the lead on strategy and almost control all the Guardians at once, combining abilities and navigating through battle. It’s an action game, with tactical elements.

“You’re always at the center of this band of misfits, and through narrative, you get to banter, you get to make a lot of quick decisions,” Olivier Proulx, Eidos-Montréal senior producer, told Polygon. “[The team] is very unpredictable.”

DeMarle continued: “[The other characters] are also autonomous, which is really interesting, because as Star-Lord, you’re calling on their abilities in combat against enemies. And they can be fighting on their own autonomously very well.”

Sometimes when the player makes a choice for the team, they might get a reaction they expect — fellow Guardians of the Galaxy aren’t always ready to take orders. Fights happen in real-time, Eidos-Montréal said — but time is slowed down when “summoning Guardians abilities.”

“You don’t necessarily expect the reaction you’re going to get,” DeMarle said. “And then you, as Star-Lord, have to deal with the repercussions of those things.”

This leads into a system Eidos-Montréal calls “choice and consequence,” meaning that player choices — even for mundane things — will change the player’s experience. The core story, how it begins and ends, will remain the same, DeMarle said, but the journey and relationships between Guardians will be unique to the player, based off choice in specific scenarios. The game is constantly tracking decision making, she said, and characters will continue to reference specific choices throughout the game. This even includes deciding when to interact in conversations — the player can choose to let a conversation play out with any input from Star-Lord, too, which will produce a different result.

As with the franchise in other media, Guardians of the Galaxy from Eidos-Montréal has a heavy focus on humor and music.

Proulx described the game as “rock and roll and sci-fi.” The team licensed 30 songs from the ’80s, everything from Iron Maiden to New Kids on the Block to KISS, Rick Astley, and Joan Jett.

“We don’t treat humor and music as separate parts of that Guardians experience,” Proulx said. “Music is woven into the story beats and gameplay as we author it in, but the player can also experience a story through it.”

He pointed to a “huddle” mechanic on display in the demo, where Star-Lord can call the group together for a pep talk with an “awesome soundtrack” to motivate the team when they’re down. But music is essential in more chill moments of the game, when the team is just hanging out on the Guardians ship, the Milano. “We have the jukebox sitting in the corner, and you can just chill to it with the Guardians,” Proulx said.

Guardians of the Galaxy is expected to be a cross-generation game, available on most platforms. Proulx and DeMarle said the game has no microtransactions or DLC — everything is available to the player to unlock through gameplay from the Oct. 26 release date.

“We’re dealing with deep themes of family, faith, and loss,” DeMarle said. “And ultimately, the hope that is then triggered in the whole storyline. These guys are out to beat the odds. What else could you ask for from the Guardians?”