Why Blizzard went dark for Diablo 4

Diablo 4 was Blizzard’s most thrilling new game announcement at BlizzCon 2019, not just because it was confirmation of a beloved series moving forward, but confirmation that Diablo was returning in its most beloved form. Diablo 4 is dark, foreboding, and for lack of a better comparison, how many fans remember Diablo 2.

What made Blizzard go from Diablo 3, infamous for its brightly-colored environments and dopamine-dispensing loot showers, to the blood-drenched darkness of 4?

“When we read about what our players want — and have read over the last 20 years about what they’ve enjoyed — it’s a very common recurring thing that Diablo 2 is held up as sort of the high watermark for tone and lore,” Diablo 4 executive producer and Blizzard co-founder Allen Adham told Polygon at BlizzCon. “We agree. And so it was kind of exciting for us to think about, going back to that darker time.”

“Every time you do this kind of numerical sequel, you have this opportunity to kind of recast the die a little bit,” said art director John Mueller. “And we felt like for this iteration, Diablo 4, we were really excited to kind of explore the darkness.”

Mueller said that the confluence of technology advancements — lighting techniques that can match Blizzard’s art direction ambitions and a large, contiguous world for players to explore — excited the Diablo team to design the game with a grim brutality in mind. But the team didn’t want to go too far with its gore, Mueller said.

“We don’t want it to be repulsive in any way,” Mueller said. “When we look at like things like gore … we tend to think about contrast. We don’t want the whole world to feel that way. We want you to feel it in moments like when you go into the Butcher’s pit in [the original] Diablo. That’s a great example of what we like about the tonality of the world. And that’s what we’re delivering on with Diablo 4.” 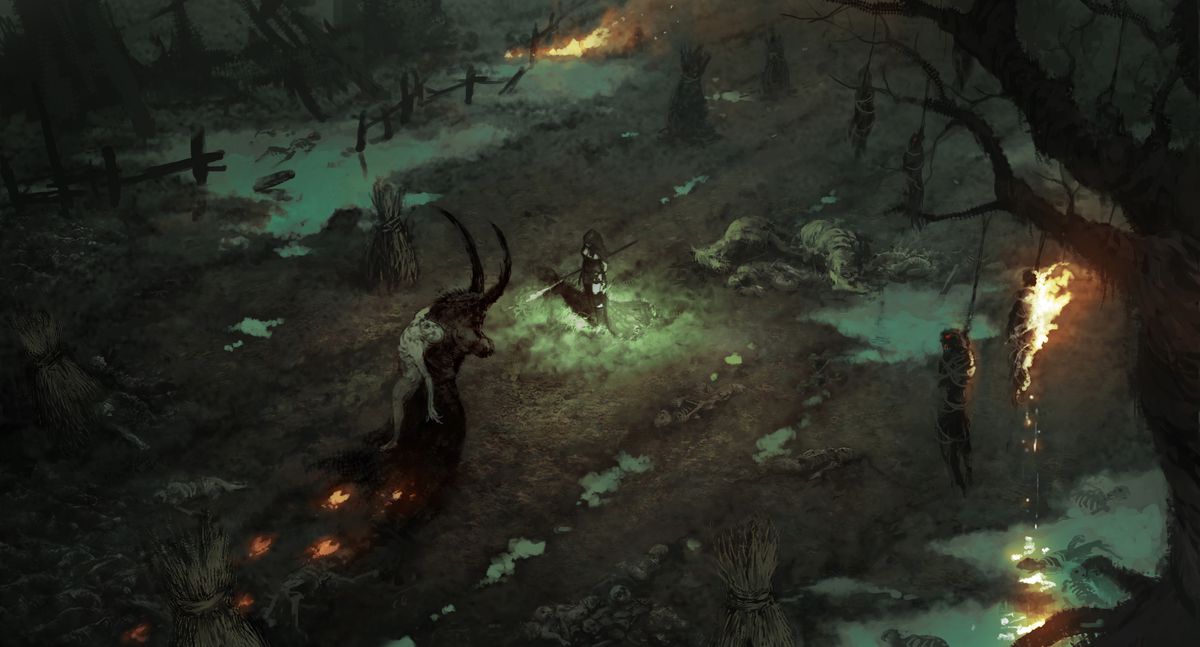 Diablo 4 needs to be ride a line, Blizzard said, between being dark and oppressive, while still appealing to a wide audience.

“As far as what’s in bounds or out of bounds, I think that we definitely like look at things and sometimes we see [imagery] that’s too much, and we pull it back because we do really want … the game to be approachable,” Mueller said.

The biggest changes coming to Diablo 4

The game’s art direction is as much course correction as it is part of a larger cultural movement in entertainment. While none of the Diablo 4 developers we spoke with outright named TV shows like Game of Thrones as inspiration — only Robert Eggers’ 2016 horror film The Witch was mentioned during our interview — it’s clear Blizzard has been inspired by the success of big dark fantasy projects outside of games.

Barriga said the team did eventually look to other video games, movies, and TV shows — particularly those that “[weren’t] afraid to go to boundaries and push them” — as affirmation that a darker take on Diablo would have broad appeal.

“You look at some of the shows on cable right now that are the most popular, yeah, they certainly have huge elements of darkness,” Barriga said.

“Diablo is our only mature IP,” Adham said, “and we made a decision right from the start: We were going to own that [maturity]. We’re not going to move away from that.”

[Last Chance!] Be Sure To Finish Destiny 2's Corridors Of Time Before Tuesday

Witcher 3: How To Reset Skills

Best Deal On PlayStation Plus Right Now: $38 For A 12-Month Membership