Home » PS4 » Wreckfest’s best feature? It tells me how to tune the car I’m about to destroy

Wreckfest’s best feature? It tells me how to tune the car I’m about to destroy

Wreckfest, which launched on PlayStation 4 and Xbox One at the end of August, is more than a slap-upside-the-head, how-the-hell-did-I-miss-this? great time for me. It’s also a revelation. A wreck-elation, if you will, about a critical layer of motorsports gaming that remains technical and opaque to a non-car guy with soft hands and clean fingernails, such as myself.

It’s in the stinking setups menu, of all things. Wreckfest is a demolition derby simulator, but give Bugbear Entertainment all credit in the world, they gave it a credible handling engine to match the spectacular (and I truly mean that word) collisions that light up every race. Wreckfest offers a standard demo derby involving a field of beaters out on some dirt patch, but the better action is in one of the game’s banger races or figure-8 eliminators. And on a course, be it dirt, tarmac or a combination, players will reasonably expect to tune their setups, even if they are going to trash the hell out of their suspension in the first two laps.

For that, Wreckfest gives me the most simple, understandable and effective setup menu I’ve used this year — and I race a lot of motorsports games. From the concrete guidance it gives, I have high confidence that I have adjusted the car for the conditions I’m about to face, without taking a practice lap or trying to convince myself the front end is “looser” or “tighter” than it should be, which is always difficult in a video game where the vehicle’s momentum is barely perceptible. 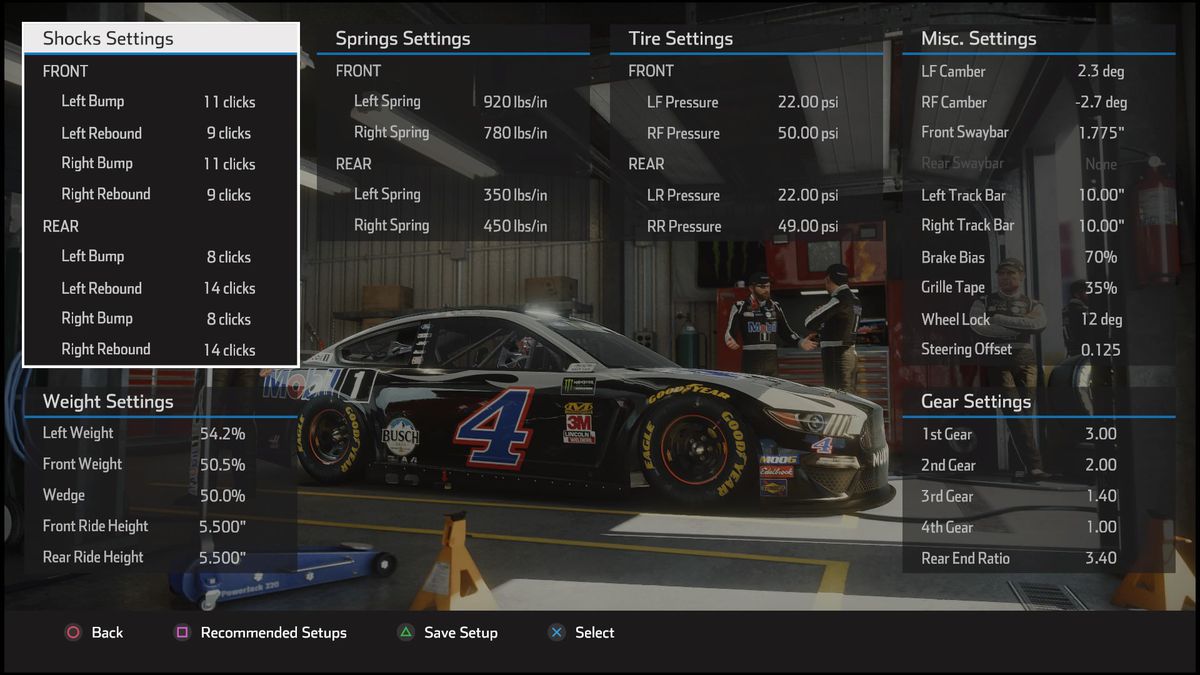 Could any person go into this menu, make a change and know what they were getting out of it? There is a broader set of tuning changes users can make, on a scale of looser to tighter, but for really optimizing a car’s performance, you’re going to be googling and then going to a YouTube video to find the numbers you need. And as my review pointed out, they completely changed the tuning model this year, so anything from NASCAR Heat 3 on back is likely to damage your car, or at least severely wear it out, more than it is to help.

Earlier this year, I was on a call with Kevin Harvick (whose car is in that image above), ostensibly to talk about being on the cover of NASCAR Heat 4. Instead I buttonholed Harvick for what I needed to be doing to my tire pressure. The 2014 NASCAR champ was gracious throughout, telling me that in all cases I needed to loosen the ride because the video game car was generally too tight to keep Harvick’s six-year-old from plowing into the wall.

To be fair to 704Games, Codemasters and other motorsports developers, there is a alrge body of core, simulation racing fans who already know what this stuff does. (I rely on them for my setups, after all!) They’re the ones who give the most feedback when developers are taking the community’s temperature for what they need and expect in the next iteration. Giving the setups menu a first-grade reading level isn’t going to keep vocal fans happy.

Newcomers also have a plethora of racing assistances and difficulty settings so that they’re not just thrown to the AI wolves. But they don’t have much guidance on how to optimize their car to beat higher difficulties. That’s the difference after all — something-something feed a person, something-something teach them to fish, right? These games have so much they could teach me, and I’m ready to learn. Thanks to Wreckfest for doing its part.