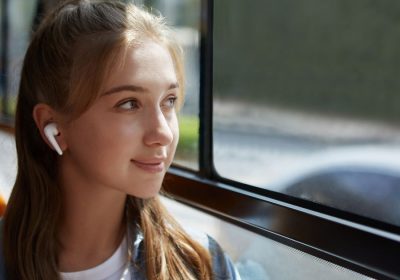 Apple AirPods fans might want to take a look at these alternatives that offer many of the same options for a smaller price.

Their flagship gimmick is the Spatial Audio option.

This basically means you’ll get a much clearer idea of a soundscape in a song as you commute because you can literally turn you head left or right to hear those sides of the song mix more clearly.

What’s that guitar playing in my right ear that’s different from the one in the left? Simply move your head to the right and the buds will move with you aurally, detecting your head movement and giving you a chance to drift away from the vocals at the centre to appreciate the instrument.

And it means you’ll feel more immersed in a tune, understanding the clever work that goes on at sound mixing stage by artists to really give their songs a wider life away from the old-fashioned stereo sound we’ve had for so long.

It also works well for movies as you’ll almost feel that dinosaur brush past your side, or that bullet seemingly rip closely past your head.

The other big deal in these buds is its noise cancelling option.

The Aero comes complete with 1More’s wide frequency QuietMax active noise cancelling technology that provides up to 42dB of noise cancelling depth at a wider than normal range of frequencies.

What that means in reality is that you can pretty much cancel out all background noise on a loud train commute, for example, allowing it to be just you and the music with no sound bleed.

Equally, you can opt for that bleed to make sure you hear station announcements, and daily life.

The sound itself needed a little work from the default for me.

Thanks to the free app, you’re able to pick from 12 studio-grade EQ presets for various music genres, allowing the Aero to handle songs from rock to classical.

It took me a fair time to nail the right rock sound for me personally, like I did with my favourite, impressive Nothing Ear (1) buds.

But the range is good and most folk will find a good preset for them.

You can even tweak further with a Smart Audio option, allowing the buds to compensate at lower volumes so bass and treble are preserved, and a Custom EQ across 10 sound points of the spectrum.

So it’s incredibly versatile and those 10mm drivers give songs a lovely rounded sound.

The buds offer more than a day’s playtime across 28-hours in both the buds themselves and the stone-shaped charging case.

There’s a convenient 15-minute Quick Charge feature that will allow the Aero to gain back 3-hours of playtime too if you’re strapped for time, and wireless charging for those who have a charge pad at home.

The Aero’s also support the latest Dual-Device connectivity that allows for a simultaneous connection of two separate devices that the user can seamlessly switch between.

So you can switch between music on your laptop and a phone call without the need to re-sync to either.

They are water resistant, so a 5km sweaty run on the treadmill didn’t bother them.

And there are three AI-powered microphones on the buds, which allow for crisp phone calls on the go.

The 1More Aeros look cool too, in either a matt black or white design, with a thinning, curved leg coming down from each ear containing the mics.

They’ve a natural, rounded sound to them that’s heavily tweakable and a pretty design.

Well worth a look, especially as there’s an extra 20% off right now on the firm’s website.