Back 4 Blood Review – A Familiar Fright 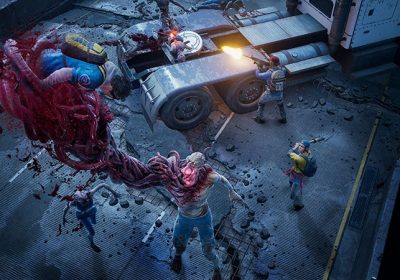 Back 4 Blood’s concept is a slam dunk. Give the team responsible for trailblazing the zombie co-op shooter with Left 4 Dead another shot at the genre, adding a plethora of modern trappings and a new wrinkle to differentiate it from Turtle Rock Studios’ past work. But after countless tech tests and some massive shoes to fill, can the frenetic first-person shooter recapture the magic? While not perfect, Back 4 Blood is a genuinely fun time with friends, and it has enough new tricks to keep fans coming back for more.

Back 4 Blood’s gunplay is a major highlight. The weapons should be familiar to anyone who’s played titles like Left 4 Dead before, but the thrilling moment-to-moment battles with the undead are satisfying. Everything from crushing Ridden craniums with your nail-covered bat to mowing down zombie hordes with an LMG has the proper weight, controller-rumble, and sound effects to immerse you in an intense experience.

Back 4 Blood is difficult, especially at the start, and I was surprised by its unrelenting enemy mobs. While I loved the heated moments where victory is in question, the difficulty balance is off. The changes in challenge come from the Game Director. This system tinkers with players’ experiences from level to level, throwing everything from fog to flaming infected at you, meaning two playthroughs of the same stage can be completely different. There were too many times I would get through a level with minor hiccups, only to get overpowered within minutes of the next segment and vice-versa. The Director also seems to overcorrect after zombies became too oppressive, and my squad would easily walk through the rest of a level with little more than a scratch after a big fight. The game can strike the right balance, but I wish those highs and lows had been tuned to offer a more consistent experience.

That difficulty curve is more manageable thanks to the card system, Turtle Rock’s wrinkle on the classic formula. As players progress through the co-op campaign, they gain supply points that can be spent on upgrade cards for each Cleaner. These range from minor 10 percent boosts to vital skills such as gaining health back from kills to an extra life if your team fails its objective.

The experience started to click for me when I began to build classes that matched my situation. By Act 3, I had assembled enough cards to create a shotgun-wielding tank that could sprint into the fray, mow down dozens of zombies, and run back without losing much HP, thanks to a card that gave me health for landing hits with my boom shot. Another time, my team and I were failing to finish off a boss, only to roll over him when we all added a card that added 20 percent damage to the special Ridden’s weak spot. The more my team varied our decks and loadouts, the less we’d have to drop ammo for one another, and we became a more efficient unit. Even after I faced the final boss, I still had plenty of cards to unlock and new reasons to return to the earlier levels.

As with most co-op-focused games, B4B shines brightest when you have a full team shredding through the special Ridden. Whether we were yelling orders to one another or laughing as someone shrieked after being tackled by one of the wall-hugging Sleepers, Back 4 Blood reminded me why I spent so many hours fighting the undead in the past and why I’m excited to do it all over again in 2021.

On the flip side, solo players may have fewer reasons to be excited. Back 4 Blood’s AI companions are competent and helpful when you need an extra health boost or ammo. But the lack of stat tracking, supply points, or even achievement unlocks kept me far away from the solo action. This is disappointing for players who want to enjoy the game on their own.

Finally, I passively enjoyed Back 4 Blood’s Swarm mode, which pits Cleaners against the Ridden in sub-sections of the campaign to battle in round-based encounters. Teams take turns playing as either Ridden or Cleaners, and whoever lasts the longest as the humans wins the round. I enjoyed playing as the undead, but I don’t love how some of the special Ridden like the Tallboy control and longed for the intense matches of the campaign. The mode isn’t offensively bad but pales in comparison to the rest of the game’s engrossing co-op package, and after a few rounds in this PvP mode, I was content to put it down to go back to PvE.

Back 4 Blood is one of my comfort food games of 2021. It is an excellent time with friends that scratches an itch I’ve had since the glory days of Left 4 Dead. While it never reaches the heights of its inspiration, the addition of cards makes me hungry to play more, even when the game isn’t at its strongest.

Turtle Rock Studios' latest shooter excels at supplying the familiar frights fans of the genre have been hoping for.