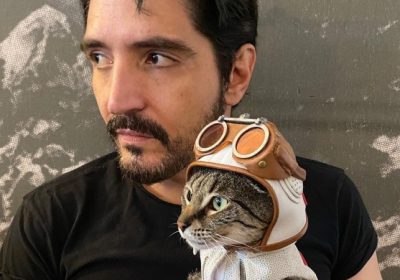 James Gunn’s The Suicide Squad is a bold, violent, fun take on the criminal super-powered team, and an unsuspecting character from DC’s universe had a memorable role in the film. David Dastmalchian’s portrayal of The Polka-Dot Man is a sympathetic take on a killer with a mostly sweet demeanor who suffers childhood trauma and a deadly extraterrestrial virus.

Posted initially on Dastmalchian’s Instagram back in June, photos of the actor and the cat he adopted while filming The Suicide Squad were shared all over social media today. The original post can be seen below, with adorable pictures included. Here’s part of the message from David’s Instagram post: “With the help of my @thesuicidesquad family & some generous animal lovers in Panama, I was able to rescue Bubblegum (full name: Abner Bubblegum Polka Dot Cat). She has been a blessing to our family & was instrumental in helping us through the pandemic.”

Abner Bubblegum Polka Dot Cat even received a full Polka-Dot Man costume tailored just for her courtesy of The Suicide Squad costume designer Judianna Makovsky, complete with a cute little polka-dotted helmet and set of goggles.  What’s cuter than a cat and its owner having the same costume? I’d argue nothing is. I’d personally like to congratulate David and Bubblegum for finding each other and being so gosh darn adorable together.

A sequel to 2016’s Suicide Squad, Guardians of the Galaxy director James Gunn’s The Suicide Squad opened to $26 million last weekend in the US box office. The film is also critically acclaimed, with a Rotten Tomatoes score of 91%. Those who would rather stay at home than brave the crowds at a movie theater can catch the film streaming on HBO Max until 31 days after its August 5 release.