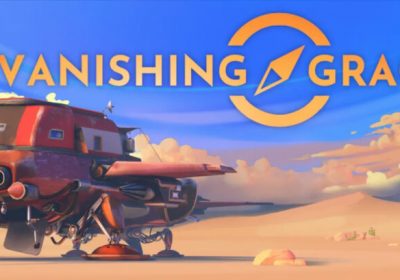 With a story set in the near-future where a solar storm ravaged the planet in 1993, utterly changing the climate most stay sheltered in the Citadel for protection. But people do still go outside, with this tale seeing you play every day civil servant Joel who decides to look for his childhood friend Grace who’s gone missing in the desolate wastelands.

So you jump into Grace’s empty craft and leave the Citadel for the first time, in doing so you must maintain the vehicle to solve the mystery. Inside the craft, the puzzles will revolve around stopping it falling apart plus you also need to collect magnetic energy to keep the thing going. You achieve this by using a futuristic boomerang to collect the energy from stones that float in the environment.

Grace’s vehicle features plenty of nooks and crannies fulled with her belongings, these will help you uncover her story as you travel through the wasteland. Vanishing Grace isn’t purely confined to the craft, as you’ll see in the trailer below you’ll be able to hop out on route to investigate this harsh vision of a future Earth.

Explaining some of the inspiration behind Vanishing Grace the team said in a statement: “As players, we are a little tired of the fact that a vast majority of VR titles are arcade focused. We think we can tell a great story while keeping the mechanics exciting and making it all stand out with a strong art direction.”

Vaniashing Grace will be exclusive to Oculus Quest via the Oculus Store, with an ‘Early February’ window slated by the studio. The videogame will cost $19.99 USD. For further updates on the latest Oculus Quest titles, keep reading VRFocus.