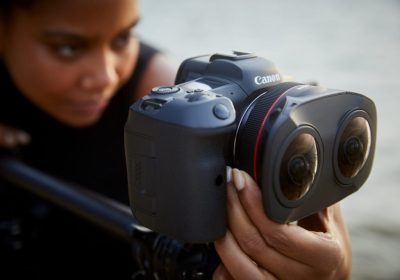 While Canon has previously dabbled in virtual reality (VR) and augmented reality (AR) technology with devices like the MREAL Display MD-20, its latest announcement offers a far more serious stab at entering the market. Canon has just announced a brand new EOS VR system that features a dual fisheye lens with an RF mount, designed exclusively for its EOS R5 camera.

There are some other quirkier features that should interest both photographers and VR content creators alike. There’s a manual focus ring that focuses both lenses at the same time, however, the right lens can be independently adjusted using an Allen key. Plus, as this is an L-Series lens, it comes with all the bells and whistles pro Canon users would expect, an aperture range of f/2.8 – f/16, coatings to suppress ghosting and sunlight flare, two UD elements per lens to correct for aberrations and dust and splash resistant seals. It even has a rear-mounted gelatin filter holder for pre-cut ND gels.

So that’s the hardware but as a 360°/180° creator knows, the software is a big part of the equation. Canon’s aim with the RF 5.2mm F2.8L Dual Fisheye lens is to make the whole process as simple as possible. This is why the EOS VR system will utilise Canon’s newly developed software application EOS VR Utility and an EOS VR Plug-in for Adobe Premiere Pro to streamline the post-production process, both of which are subscription-based. Canon will also update its EOS Utility and Camera Connect App for remote control and live image previewing.

Because the whole setup puts both images onto a single sensor only one file is created, removing the issue of stitching and syncing multiple images. These two images are circular initially, with the EOS VR Utility software converting them into a side-by-side equirectangular 180° VR format for viewing on VR headsets.

For comparison, a 360° camera like the Insta360 Pro 2 starts from £4,599 and does offer all-around recording but doesn’t offer the compact versatility the EOS VR system seems to provide. For continued updates on Canon’s new EOS VR system, keep reading VRFocus.