Home » Reviews » Days Gone Camps Guide: How to Increase Trust, Turn in Bounties and use the Kitchen

Days Gone Camps Guide: How to Increase Trust, Turn in Bounties and use the Kitchen 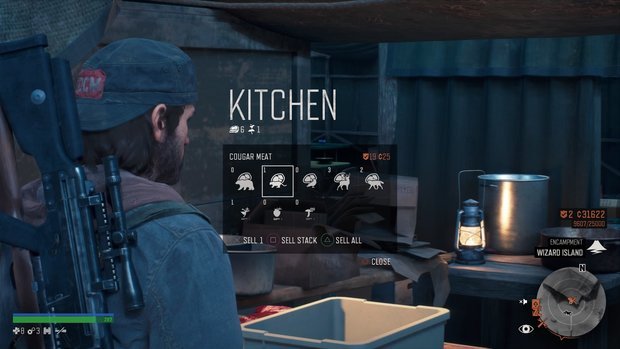 2 – Hunt game and turn over meat

Similar to Freaker ears, you’ll want to turn over any cuts of meat you scavenge as you move through the wilderness.

Post-apocalyptic Oregon is filled with a variety of wildlife ranging from deer to mountain cats. No matter how you kill these animals, you’re always able to scavenge their bodies by interacting with the carcass and holding square.

Take the meat back to any of the camps to earn a small amount of trust. Depending on the type of meat you’re returning to the camp, you’ll receive a different amount of trust. Bear meat provides the richest rewards, but also significant risk.

You can also trade in certain herbs at the same counter. You won’t receive as much trust, but, as mentioned before, every little helps.

Marauders and thieves are a constant threat to the residents of each camp. If marauders are left undisturbed, they set up road traps and ambushes, taking out any survivors they can.

You can spot ambush camps by looking for plumes of smoke in the sky. Each region has roughly three to four you need to clear to make the campsites safer for your fellow survivors.

Clearing each ambush camp of marauders lessens the chance of running into road traps, making it safer for Deacon and the other survivors to use the roads again.

Because ambush camps present such a large threat to campsites, taking them down will earn Deacon good amounts of trust. It’s one of the easiest ways to build alliances but, be careful, marauders fight back hard. 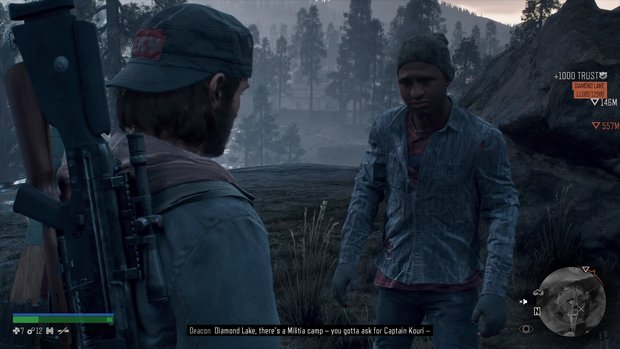 4 – Complete side-missions inside the Region

Every region has a select number of bounty hunter storylines and NERO checkpoints to find. Some of these missions may seem like skippable side-quests, but they offer more than just trivial collectibles.

Every mission you complete in the region will increase your trust with an affiliated campsite. So make sure you carry out odd jobs for the community like a good post-apocalyptic survivor!

Of course, main story missions will provide you with the most amount of trust, but it’s still worth carrying out smaller campsite jobs as well.

The main lesson here; don’t just stick to compulsory missions or you’ll miss out on a vast array of superior kit.

5 – Save lots of hostages

Occasionally, you’ll come across survivors who have been taken hostage by marauders and thieves.

You’ll find most of them along the lesser-travelled sandy tracks where bandits can rob survivors and maybe even kill them much more easily.

Taking down the bandits in question is the only way to save the hostage. Kill the two or three marauders and any Freakers your gunfire draws. Once you free the captive you’ll be given a choice of the campsites you can send them to, and each camp will offer you a different reward.

Iron Mike’s might offer you 1000 trust points and Copeland might offer a good chunk of money but only a tiny bit of trust. Think carefully about what you need more of before sending the survivor to one of the camps. 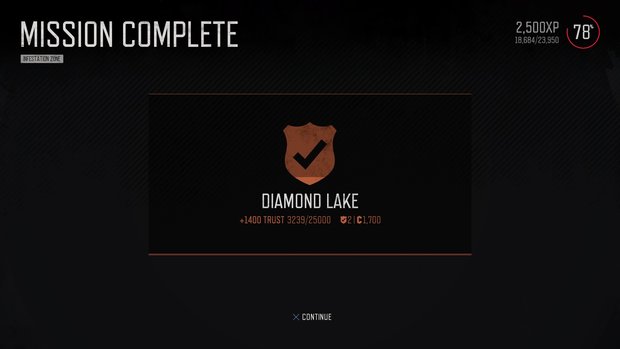 In Days Gone, infestation zones (groups of several Freaker nests) are the most dangerous places in each region.

Lone zombies will roam aimlessly through each region, and you’re limited in what you can do to stop them aside from picking them off one by one.

However, infestation zones can be targeted and burnt to the ground to diminish the Freaker population and make the surrounding wilderness safer for survivors.

Destroying infestation zones immediately makes the world easier to move through and gains you a large chunk of trust from nearby camps. If you have the tools for the job (Molotov cocktails work best) take as many down as you can.

Like infestation zones, hordes of Freakers (sometimes hundreds strong) are incredibly dangerous. In fact, they’re perhaps the deadliest threat in the entire game.

Hordes are unpredictable and very difficult to take on. Though they vary in size, every horde is dangerous, and you must prepare extremely well if you’re even thinking about engaging one.

It’s best to fight hordes in the day once you find their daylight hibernation spots. These are normally inside caves or abandoned buildings. If you feel you’re ready to take on a horde, we have a full guide to help you through the battle here.

Because of the giant threat hordes present to the various communities, you’ll receive a giant chunk of trust for eliminating them. If you’re up for the challenge, good luck!

Don’t forget! Daily Star Gaming also has you covered for Days Gone Historical Marker locations in each of the game’s regions, as well as boss guides, survival tips and more!