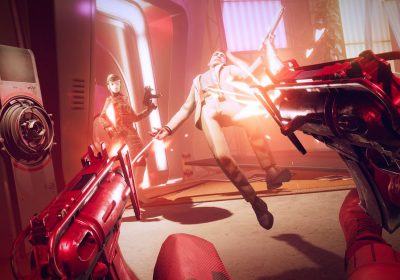 Of the many fantasies humanity has entertained, conquering time has been paramount, whether through time machines, freezing, or reversing. If time is the great consumer, then those that control time control the universe. It is no wonder, then, that the villains of Deathloop have decided to seize time for themselves.

Arkane Lyon’s latest sandbox adventure deploys a time mechanic like no other game. The studio has created the equivalent of a finely tuned watch. And it’s truly one of the most incredible video game experiences of my life.

Deathloop is a first-person time-looping murder/puzzle game where time has become both meaningless and everything. Player character Colt wakes up, with no memory, on the beach of a strange island. The island is experiencing one day on repeat, with everyone — except Colt (and another character) — performing the same actions. Colt wants to break this cycle and escape.

The island is controlled by eight rich, murderous assholes called Visionaries. Colt must assassinate all eight before the end of the day to break the loop. The Visionaries are spread out over four distinct sandbox districts and four time periods. Moving from one district to another moves the day forward. However, while Colt is in one district, time stands still. I can take all the time I want to explore — which is essential for the deeply fascinating, complex and carefully crafted level design Arkane is known for.

Added to this is Julianna, a young woman determined to taunt and murder and also encourage Colt. Like Colt, she remembers previous loops. And she can appear at almost any time to ruin Colt’s plans. The most important part is that she can be controlled by other players, who can also upgrade her along a completely separate progression path. I was not able to test this out fully, given how few people were playing during the review period (and I also had severe lag while playing on PlayStation 5). But the few moments where it worked were amazing. Playing as, essentially, the villain transforms the entire experience, and it’s a genius bit of design. I look forward to experiencing it fully now that more people are playing.

The relationship between Colt and Julianna is the heart of this game, and the performances by Jason E. Kelley and Ozioma Akagha, respectively, are astounding. It’s also important to note that both playable characters are Black, which is cause for celebration when there is a dearth of Black people being represented as leads in big-budget media (and in particular, a lack of Black characters who aren’t gang members or criminals). Furthermore, Colt is a bit of a weirdo and a surprising lead: He sometimes bursts into song, he enjoys murdering, and he is terrible at telling jokes. He’s your friend’s weird dad. Even when Julianna is threatening him, he doesn’t have the heart to be mean to her.

It’s surprising and delightful that most of Deathloop is intelligence gathering, not assassinating. After all, when there are still four Visionaries left at the end of the day, Colt has not broken the loop. In other words: Deathloop is Edge of Tomorrow meets Hitman.

Colt obtains access to multiple upgradeable weapons. While some of these are standard fare — pistols, SMGs, rifles — some legendary variants are notable. My favorite is a pair of pistols that can be stacked together like two giant Lego bricks to form a rifle.

As is tradition with Arkane’s games, Colt also has access to otherworldly powers. Shift allows Colt to phase through a large gap instantly (it’s basically the Blink ability from Dishonored); another allows Colt to link multiple enemies such that killing one kills them all (similar to Domino in Dishonored 2). Mixing the powers and weapons often leads to incredible moments. For example, after I located two Visionaries surrounded by their minions, I used my link ability to tie both targets to one isolated guard. Killing him meant I took both down instantly.

With hacking tools available and multiple entryways to each building, Deathloop is more than welcoming to stealthier players. But this is the first Arkane game that feels wonderful as an all-out action shooter, too. In fact, an Arkane game has never felt this good. I didn’t feel punished for breaking a stealth approach, and some magic powers even encourage it. Colt can toss people into the air; he can go berserk and become supernaturally strong.

Part of what makes the game feel so smooth is that the studio also has fully embraced the PS5’s DualSense controller. Every gun feels unique; every power has its own sensation. Colt’s footsteps perfectly sync with the rumble on either side. It’s an incredibly tactile experience.

In terms of aesthetics, Deathloop has a quirky, albeit derelict, 1960s spy theme. Think No One Lives Forever, but covered in decay. One district is essentially an amusement park, while another is graced by snow and a giant, pulsating satellite array. None of this is to mention how the locales shift throughout the day: A car that was idle in the morning has crashed through some windows by the afternoon; a ship in open water is reachable later when ice has formed. Despite this being a game about repetition, no interior or exterior location feels recycled.

One would expect moving from one level to the next to be seamless on a new-generation console, but unfortunately, the game has to log into its servers each time. It only takes a few seconds, but it’s undoubtedly a blow to the slick momentum elsewhere. Such is the price for an innovative multiplayer mode, I guess.

Another issue is the game’s strange reluctance to let me track information properly or on my own. Colt has a murder board, but it only gives me step-by-step tasks, not broad information Colt obviously knows. The pre-mission planning menus are clunky, making it hard to know where specific information is or even if it can be tracked. I found it easier to make my own notes.

What’s more, I had imagined the game would require me to plot the eventual perfect murder day (i.e., to kill all the targets before the end of the day). But Deathloop itself puts all the information together and sets out the path. I understand how this might prevent frustration for players who aren’t diligent note takers. But it mitigated my sense of satisfaction after paying attention every step of the way.

Deathloop is a strange but wondrous beast. It’s a time-management game where I built a precision murder machine to effect a carefully plotted rampage. It’s also a story about a man finding out who he is and why he’s being hunted by a young woman who knows everything about him. Time is Colt’s prison, yet also the source of his power.

But it felt liberating to break free entirely, to have executed such quiet devastation. By the end, I was left in awe at the precision of Deathloop’s focus, the liberty and respect afforded to me as a player, and the minimization — though not complete removal — of frustration in a game entirely centered around repetition. The success with which Arkane pulled this all off is a testament to the studio’s incredible talent and intelligence. No other studio makes you feel quite so smart, and no game of theirs has done it better.

Deathloop was released Sept. 14 on Windows PC and PlayStation 5. The game was reviewed on PS5 using a pre-release download code provided by Bethesda Softworks. Vox Media has affiliate partnerships. These do not influence editorial content, though Vox Media may earn commissions for products purchased via affiliate links. You can find additional information about Polygon’s ethics policy here.