Home » Reviews » Death’s Door may look like Dark Souls, but its learning curve is much kinder

Death’s Door may look like Dark Souls, but its learning curve is much kinder 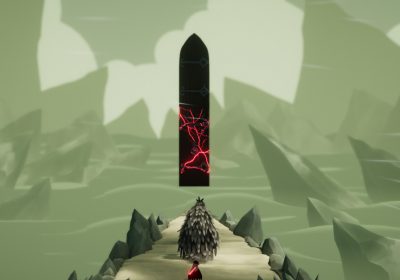 A simple screenshot of Death’s Door evokes its Dark Souls influence without you even needing to know it’s the follow-up to Acid Nerve’s previous top-down boss-killer, Titan Souls. Death’s Door captures that FromSoftware gloom in an instant, but it’s a far more forgiving experience than its inspiration.

Where Soulsborne games build seemingly impossible walls for you to break down from the start, Death’s Door carefully ramps up its difficulty to create a fair and completable experience. It’s still a challenge, but Death’s Door reduces the likelihood you’ll hit an impassable wall by slowly pushing your boundaries.

What is Death’s Door?

Crow stares up at one of the game’s first bosses
Image: Acid Nerve/Devolver Digital

Death’s Door is a 3D, top-down action game. You play as Crow, but everyone just refers to you as a “reaper.” It’s your job to travel from the bureaucratic afterlife to claim the lives of three powerful souls and use them to open a titular door that’s been sealed shut.

The game plays out like one of the top-down Zelda titles. You sprint through the overworld, taking out baddies, and then dive into a dungeon to solve some puzzles. Sometimes in the dungeon you’ll unlock a new weapon or spell that will allow you to enter new areas, unlock new secrets, and create new shortcuts. The overworld is divided into areas, and by defeating each area’s boss, you can move forward to the next, and then the next.

The structure is similar to Zelda, but the tone evokes FromSoftware games. There’s a melancholy to Death’s Door that comes from the clash between charming NPCs, a gloomy world, and your role as the harbinger of death. Mechanically, Death’s Door is about weapons, stat increases, dodging, and watching for boss patterns. As you collect Souls (their actual name in Death’s Door), you can upgrade Crow’s strength or magic ability. You’ll find new weapons that change things like attack speed, damage, and range. And, of course, you’ll die. It’s a toned-down version of FromSoftware’s RPG trappings, but it’s there.

Except that death is never punishing in Death’s Door. It’s simply a way for you to learn and improve.

Difficult games want you to succeed; some are just more sadistic than others.

Death’s Door starts as a relatively friendly romp. The early enemies you encounter have simple attacks, and you only face a few at a time. The first bosses have comically long windup animations. They exist to teach you a singular idea, like the fact that greedily finishing your combo can get you killed.

When you die, you’re swiftly teleported back to a nearby door, which acts as a portal to the game’s hub world. After death, you keep both your knowledge of the fight and the Souls you’ve collected along the way. There are no corpse runs in Death’s Door.

Instead, the difficulty comes in getting back to the boss with full health. Death’s Door has a pip-based health bar, meaning every attack just removes a single pip of the bar. It’s both a blessing and a curse: There aren’t attacks that you can just take on the chin and keep battling, but nothing can one-shot you either.

Healing is where Death’s Door punishes you to teach a lesson. You don’t carry a healing flask or any potions. Instead, you can plant seeds in pots strewn about the world. These seeds are collectible, and there’s a finite amount (although I had so many by the end that it was never an issue). Seeds grow into plants that allow you to heal back to full. The plant then hibernates for a bit and should be back up the next time you die. But without being able to heal until you find a plant, every strike against you makes the road more dangerous.

This journey back to a boss is stressful — a wayward hit can put you at a significant disadvantage — but it also gives you a chance to practice the skills you need for the fight. If you died in your last boss attempt because you failed to dodge the boss, Death’s Door wants you to practice dodging on your way back.

Each boss is more difficult than the last, but only slightly. In my own playthrough, I went from not taking a hit during the first dungeon’s boss, to almost dying on the second, dying a handful of times on the third, and then bashing my head against the final two.

Dark Souls games place big barriers in front of you. They test overall skill before letting you move forward into the rest of the game. You’ll need to learn, but FromSoftware leaves the lesson plan up to you by offering up seemingly insurmountable bosses that you’ll eventually learn to overcome, by learning their attack patterns or by over-levelling. Death’s Door offers more of a guided ramp, helping players by placing hurdles that are slightly taller than the last in front of them. It wants you to push and push so that you’ll eventually look back and be amazed at how small the first boss seemed in comparison.

For Dark Souls veterans, Death’s Door provides a less stressful but moody journey through a new world that offers familiar gameplay from a new, top-down perspective. But for players who’ve never played a game like this, Death’s Door gradually leads you into the deep end.

Death’s Door is available on Windows, Xbox One, and Xbox Series X . The game was reviewed on Xbox using a copy of the game purchased by the reviewer. Vox Media has affiliate partnerships. These do not influence editorial content, though Vox Media may earn commissions for products purchased via affiliate links. You can find additional information about Polygon’s ethics policy here.