Home » Reviews » .dungeon turns what you love into inspiration for a passionate tabletop RPG

.dungeon turns what you love into inspiration for a passionate tabletop RPG 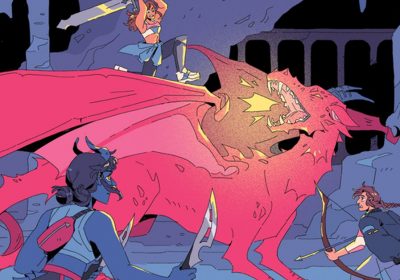 Planning for my weekly Dungeons & Dragons game was a lot of work, which is why I handed over the reins to another member of the party a few years ago. Over the past few months though, I’ve had the itch to fire up another campaign. It’s just that this time I’d rather that it not feel like doing homework. One of the options that I’ve stumbled upon is called .dungeon by John Battle. It’s less a game and more of a filter, an engine that uses all your past entertainment experiences as fuel for an ongoing, 20-sided adventure that’s all your own. It’s also one of the most passionate new RPGs that I’ve read all year.

To prepare for a game of .dungeon, game masters first need inspiration. That can be the books on your bookshelf, all the old tabletop role-playing modules collecting dust in the closet, your favorite animated series, or even your Steam backlog. Just pick out 20 things that you love, and assign one to each side of a 20-sided die. That’s your world — except it’s a massively multiplayer online game, and all your players will be people playing that MMO.

A $15 PDF includes all the rules you need to create non-player characters, obstacles, and motivations. The system is so nimble, and the ruleset so airy and light, that you could easily gin things up on the fly.

Character generation is similarly a breeze. Players are encouraged to literally come as they are. There’s a unique set of skills to assign: RNG is your ability to work with or against the MMO’s programming; Meta represents how much you know about the game itself; System is your skill over the game mechanics; Tilt is your ability to stay calm and avoid rage quitting; Charm is your ability to project your own personality into the game; and Perception is your ability to rely on your own physical senses. All you need to do is assign one of the standard polyhedral dice (a d4, d6, d8, d10, d12, and a d20) to each stat, and you’re ready to go. The bigger the die, the better you’ll be at that stat.

Then come the perks and skills. Players need to note their real-world job. In-game, when you’re doing something that applies to your job, you can roll one stat die twice and keep the higher result. There are classes as well: knight, hacker, beast, mage, witch, leader, artist, troll, dungeoneer, and bard. But these aren’t your average character classes. Most have a quirk that crosses the line between the real-world and the game itself.

For instance, the knight class needs to pick a vow from a short list, which includes silence, truth, peace, and poverty. Rules determine how that vow can be broken in-game, and once broken players will need to write a letter of apology before a debuff can be removed. The bard, on the other hand, must make a music playlist in the real world. During the game they can use that playlist to buff the party. It’s an engaging, creative way to get your players to empty their pockets, explore their minds, and get the hell off Twitter while they’re all together playing the game together.

.dungeon isn’t all about stunting through weird gaming experiences or niche anime. It’s also about how we express (and suppress) our humanity online. Game masters are encouraged to create non-player characters that are other people in the fictional world who are also playing the game. The party will explore their relationship with that “real” person throughout the course of a campaign, and their journey through that relationship will mirror their journey through the 20 sides of the game world. You’re not just exploring a metaverse in .dungeon, you’re exploring other people as well, it’s just that those other people are made up and only exist inside the game master’s head.

We’ve all been online an awful lot lately. Tabletop gaming feels like one of the best ways to let go, step back, and be in the same space as other human beings. But it can also be a way to explore those same, complicated feelings that we have from spending too much time online. .dungeon is an amazing way to work through those nagging digital traumas that we all seem to be afflicted with right now.

Or not. Maybe you just go kick in some virtual heads with your friends, and do weird, game-breaking shit inside your favorite video games.

You can find .dungeon on itch.io. The game is being supported by a series of $5 zines, titled Pregame Lobby. Issue one is available now.