Imagine, if you will, that you’ve had a job for years.

You do your duties well, and your customers speak highly of you. But one day, a total stranger walks into your life. Maybe this person doesn’t like your appearance, or they dislike your accent. Maybe they’re just in a bad mood. Whatever the case — the complaint isn’t reasonable, but all the same, after years of upstanding hard work, you’re out of a job.

Sound ridiculous? Maybe so, but in the age of the gig economy, that’s exactly the reality we live in. A single bad rating can destroy a life, no matter how absurd the reasoning behind it.

Neo Cab, a recent release on Apple Arcade, Windows PC, Mac, and Nintendo Switch, puts you behind the steering wheel in a cyberpunk world where a single company dominates city life. You can think of the protagonist as a futuristic Uber or Lyft driver, except in this society, such workers are a dying breed. Most cars are automated, driverless experiences where customers don’t have to deal with any humans. Those who still pilot cabs consider themselves lucky to have any job at all, even if they have no benefits or career progression to speak of.

“The only game over state in Neo Cab is getting fired, and it can happen at any time with a sustained sub-5-star rating,” says Patrick Ewing, creative director at Neo Cab developer Chance Agency, over Twitter messages. “Just like all Lyft and Uber drivers today.” 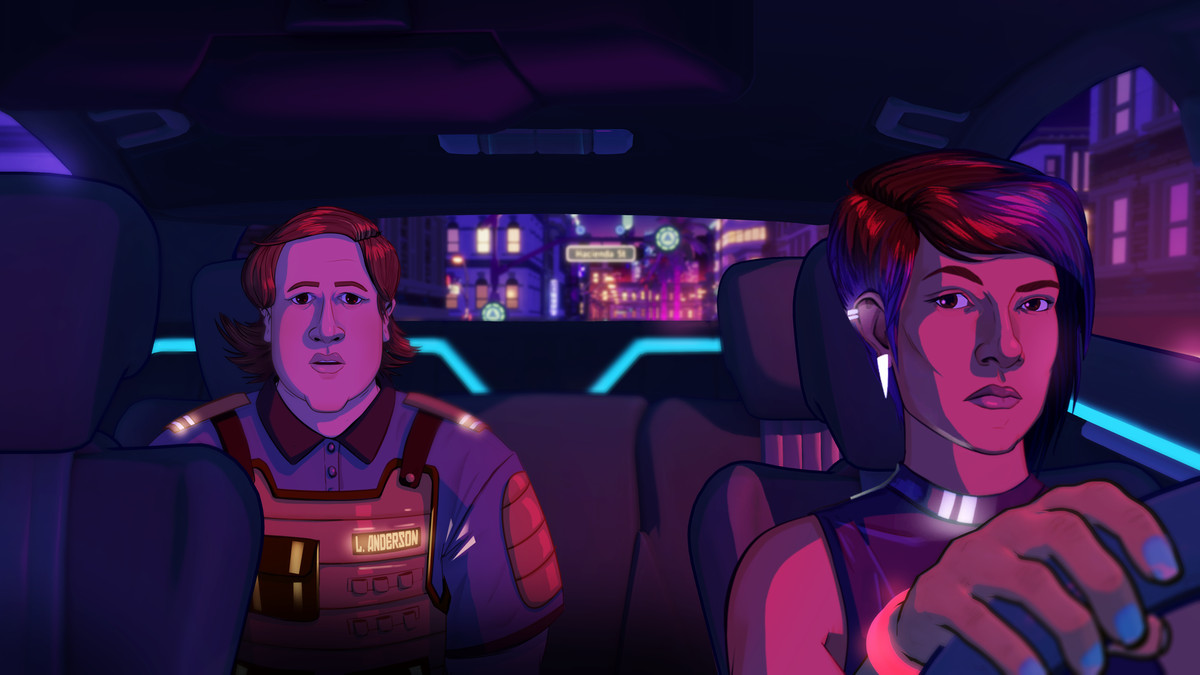 To research the game, Ewing briefly became an Uber driver himself. Mostly, though, he spoke to many drivers to get a feel for what the experience was like. The stories he heard were horrendous.

“I met a driver fired over three anonymous complaints after five YEARS of driving,” Ewing says. “He showed me his app: five-star rating, over 9,000 trips.”

The driver didn’t get an appeal process, or an explanation for why he was suddenly out of a job. But he did have a theory.

“His guess for why this happened out of nowhere? Because he grew out his afro,” Ewing says. “That’s the only thing that changed — he went from being a clean-cut black dude to somehow a threatening black dude.”

Those dynamics are alive and well in Neo Cab, where the player spends most of their time talking to passengers riding in the back of their car. Sometimes, you can get a pleasant or reasonable customer. Most of the time, though, you have to deal with some flavor of bullshit.

I’ve had passengers in Neo Cab who gave me a bad rating because I didn’t smile enough. Once, a customer got in without using the app and demanded to be taken somewhere. At another point, a very drunk passenger got into the vehicle, puked everywhere, and then pretended the vomit had been there all along. Because I dared to ask him about it, he gave me two stars. The cab company immediately issued me a warning, even though every passenger up until that point had given me five stars. 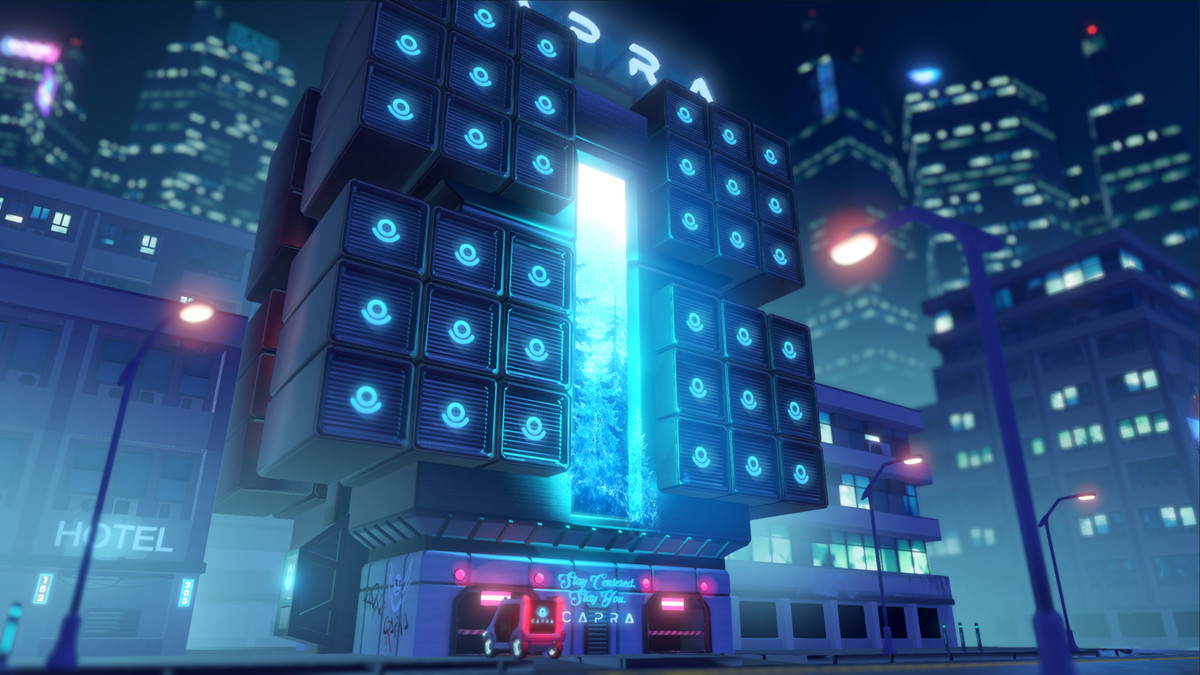 That’s the thing about all of this — no matter what direction you’re pulled in, and even if you’re asked to break the law or put yourself in danger, the customer is always right. Because if they’re not? Well, they might hit you with a one-star rating, and all of a sudden your livelihood is in jeopardy.

That’s the game that Chance Agency sought to create — a critique of Uber and Lyft, yes, but more overtly, a hard look at the “technocracy and disruption” that happens when an existing industry is replaced with algorithms. What Ewing didn’t expect, however, was that the act of releasing this game would mirror the experience he was critical of in the first place.

“One of the weirdest parts [of the gig economy] is that every stranger can have real power over you, and that feels very similar to indie game development,” Ewing says.

When a video game is put out into the world, it has to go onto a storefront, where users often have the power to dictate not only the public perception of a product, but whether or not other people get to see the game in question in the first place. On Steam, the world’s leading PC gaming distribution platform, that process begins before a game is even out. Once a developer generates a store page for their Steam launch, there’s a push to get players to place the title on their wishlist. The more wishlists a game is on, the more likely it is to get a boost in the algorithm, developers tell Polygon.

“Wishlists [make it] more likely you’ll get feature placement, drive traffic to your page, etc. at launch,” says Tom Ohle, director of video gaming public relations firm Evolve. On a platform like Steam, which has daily releases, these boosts in visibility are crucial — it’s very easy to get lost in the mix.

Once the game is out, players on storefronts like the App Store can rate your games, or they can issue a verdict on Steam. For players considering a purchase, these ratings can be a useful tool.

But they’re not perfect. There’s nothing stopping someone from giving you a bad review for unjust reasons. On Steam, it’s become a full-blown epidemic, as disgruntled players will take to “review bombing” titles for reasons that have nothing to do with the quality of the actual product. In one egregious case, Total War: Rome 2 saw an influx of negative reviews over the frequency at which women generals appeared in the game. Valve has taken measures to deal with review bombing, in one case even throwing out a wave of ridiculous negative reviews hitting Borderlands 2 years after release — but even so, developers are still at the mercy of players.

“I do feel like I’m trying to understand, fight against, even seduce The Algorithm in my day-to-day dev life now,” Ewing says, noting that lately, he’s been “spending more energy thinking about that [more than] I do around reviews from the gaming press or thoughts of doing DLC.”

As a progressive game that focuses on dialogue, Neo Cab has to deal with a number of potential pain points. One screenshot sent to Polygon by Ewing showed a woman who says she enjoyed the game until it used “they/them” pronouns, which caused her to delete it altogether.

“If this person cares enough to reply on Twitter, does she give us a one-star review?” Ewing asked.

Things of that nature do happen. Right now, there are one and two-star reviews on the App Store that chide Neo Cab for being a “talking simulator” that is “not even a game.” A three-star review notes that Neo Cab is “too political” in addition to not being an actual game. This is a common complaint: Over on Steam, negative reviews also berate Neo Cab and call it “not a game but a visual novel.” 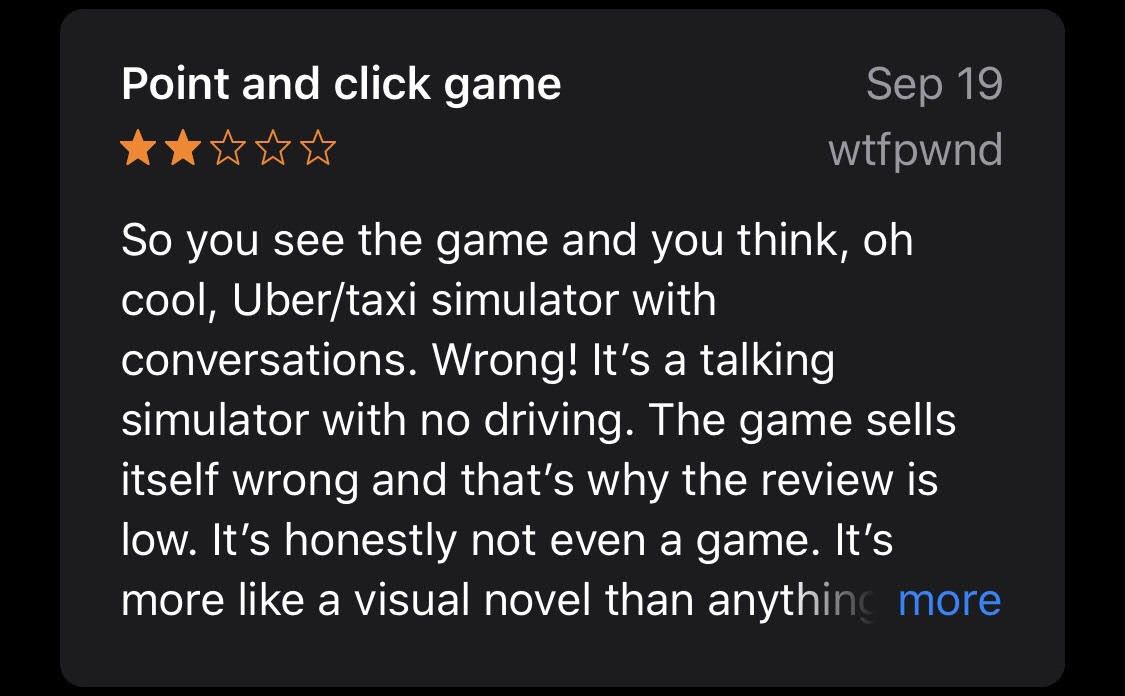 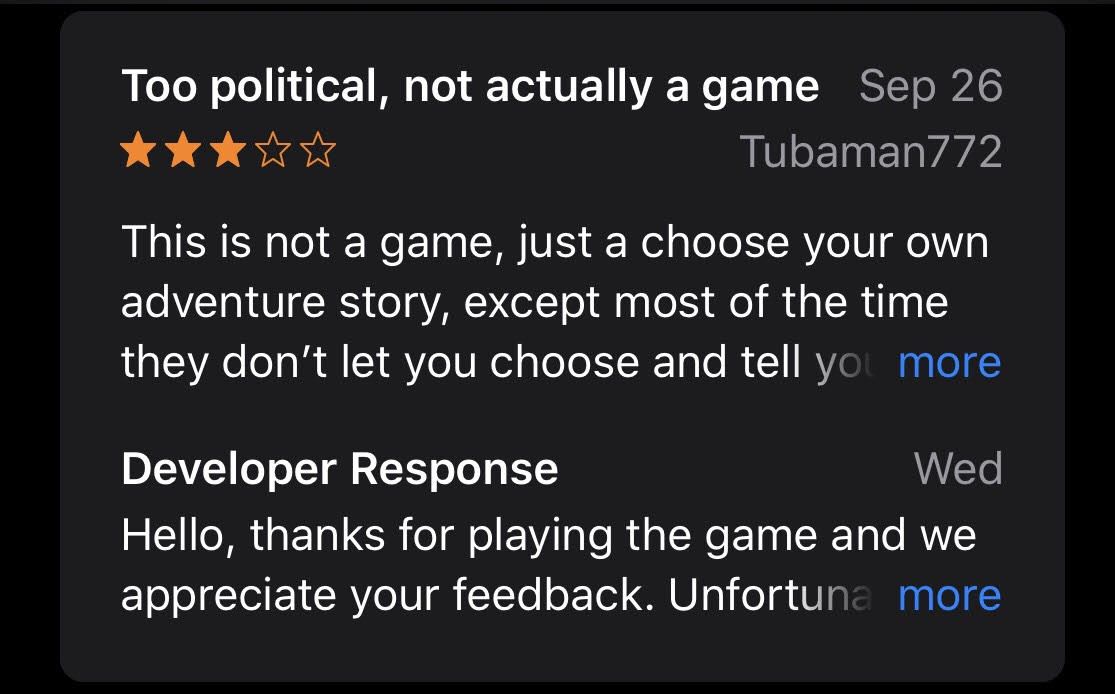 These types of reviews aren’t common enough to completely ding the game: on Steam, Neo Cab has a “very positive” rating, while on the App Store, it has a 4.2 out of 5 star rating. But the fact the developers have to worry about this at all is troubling, and takes the studio away from more legitimate concerns, like creating more content or patching out bugs. Also, that success has come at a cost.

“You tend not to speak your mind when confronting trolls on the forums,” Ewing says. “You don’t want community perception to tip against you and lead to review bombing.”

In speaking to Polygon, Ewing seemed concerned over what he could and could not publicly say out of fear of alienating players, even when it comes to clearly unjust reviews, or, at times, harassment. Ewing shared screenshots of a player theatening him if the game was released on the Epic Games Store.

“I’m not sure how to fight back yet, to be honest,” he says. When it comes to developer friends, he’ll sometimes step in and argue with people about things like the Epic Games Store. But it’s easier to do so when the players aren’t breathing down your neck, specifically.

“I would never do that if our game was on Epic, because I would expect that to work out about as well as it did for the Ooblets team,” Ewing says.

The only thing he can do, really, is to “feed” the almighty algorithm as best he can. Until things change, the customer is always right.