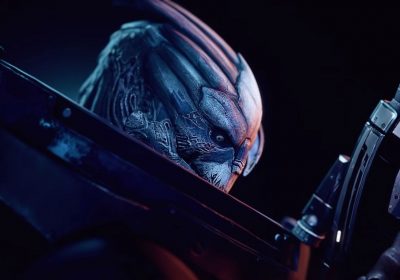 Saving the galaxy is not easy or free. While it’s tempting to think that heroes like Mass Effect’s Commander Shepard are benevolent people with magazine smiles and hearts of gold, doing what needs to be done is rarely nice, friendly, or wholesome. I mean, there’s a reason so many stories focus on anti-heroes as a means of achieving at least a semblance of verisimilitude – it’s easier to believe the roguish wildcard with nothing to lose can stay cool in the maelstrom than the spandex suit savior with little to gain.

I play a mostly Paragon Shepard because it’s just how I am. In real life I can barely slag someone off without apologizing profusely for 20 years afterwards. I’ll tell someone off if they’re being an arsehole, but if they’ve done nothing wrong, I’m naturally going to be polite. The thing is, that personality is not in line with the things Shepard needs to do throughout the Mass Effect trilogy. Sure, you can cure the Genophage. You can save the Council, spare the Rachni Queen, and refrain from punching that annoying reporter in their annoying face. You also have the highest body count in the galaxy, though. Death is the shadow you cast on the universe, and for a game with so many tens of thousands of lines of dialogue, bullets do a lot of the talking.

This is why Garrus is such an essential part of all three Mass Effect games. You don’t have to recruit him if you don’t want to – although I will judge you forever if I find out you don’t. The story without Garrus being there to inform it is significantly weaker, though. He’s not my favourite character – that would be Wrex – but I do think he’s the most important one on the Normandy in terms of contextualizing the events of the trilogy and the actions you make as part of them. Without Garrus Vakarian’s constant presence, the seams of Mass Effect quickly come undone. 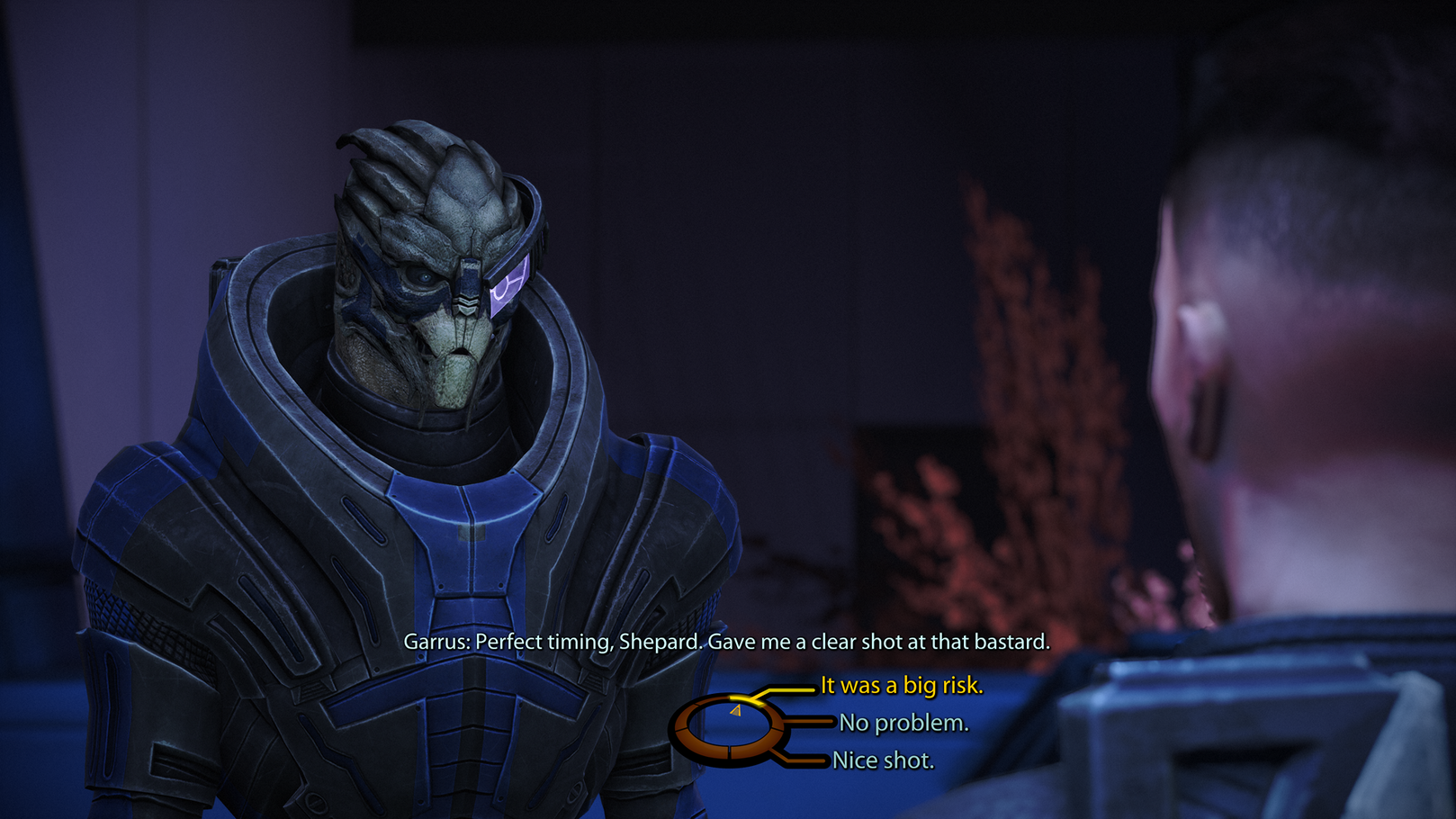 The main reason for this is Garrus’ Renegade streak. For a Renegade Shepard, this is important for subtly articulating that at least part of your squad supports your ruthlessness. Don’t get me wrong, Garrus isn’t full Renegade – he wouldn’t punch the reporter unless they were being really annoying – but he understands that sometimes there’s just cause for ostensibly intense measures. If Ashley questions one of your decisions – which, I mean, come on, you’re the space racist here – or Jacob is on his high horse, Garrus acts as the perfect counterweight. Wrex is pretty Renegade too, as is Jack. Samara has her own brand of ruthlessness, while Mordin’s past is filled with shady decisions. Garrus is Renegade based on his own personal justice, though. His heart’s in the right place, but it’s also what drives his mentality of accomplishing goals regardless of cost. For someone who wishes they saw the world in black and white, Garrus’ outlook is remarkably grey to the point that almost anything is permissible under the tenet of getting the job done.

This is evidenced by how Garrus acts around you. For example, early in the first game, when you head to Chora’s Den in order to interrogate Fist, Garrus will do and say several things that are arguably contradictory, but actually serve in illustrating an accurate portrait of his character. After fighting through the main door, you’ll come across two warehouse workers. Most people just continue shooting – shoot or be shot, right? However, you can actually talk to these people and convince them to leave. Garrus will say he never thought of this as an option, proving that he – like most players – would have just pulled the trigger without thinking about it any further. Two minutes later, he’ll react negatively to Wrex blasting Fist point blank with a shotgun – this is a criminal who is being compliant and needs to be reprimanded by the proper authorities, not some ordinary bounty fodder.

This isn’t without its contradictions either. When you meet Garrus, he’s a cop. He works for C-Sec and is hampered by bureaucratic rules that serve the status quo more than any kind of meaningful law enforcement – look at that for science fiction, eh? Still, even after quitting his gig as a police officer he respects terminal protocol – it’s just the method that doesn’t matter to him. This is what drives him to you in the first place, the promise of agency and activity. If you’re a stick-in-the-mud, goody-two-shoes Paragon, Garrus’ dissent for rules written by people who never need to serve under them is what makes a lot of your more important actions believable. 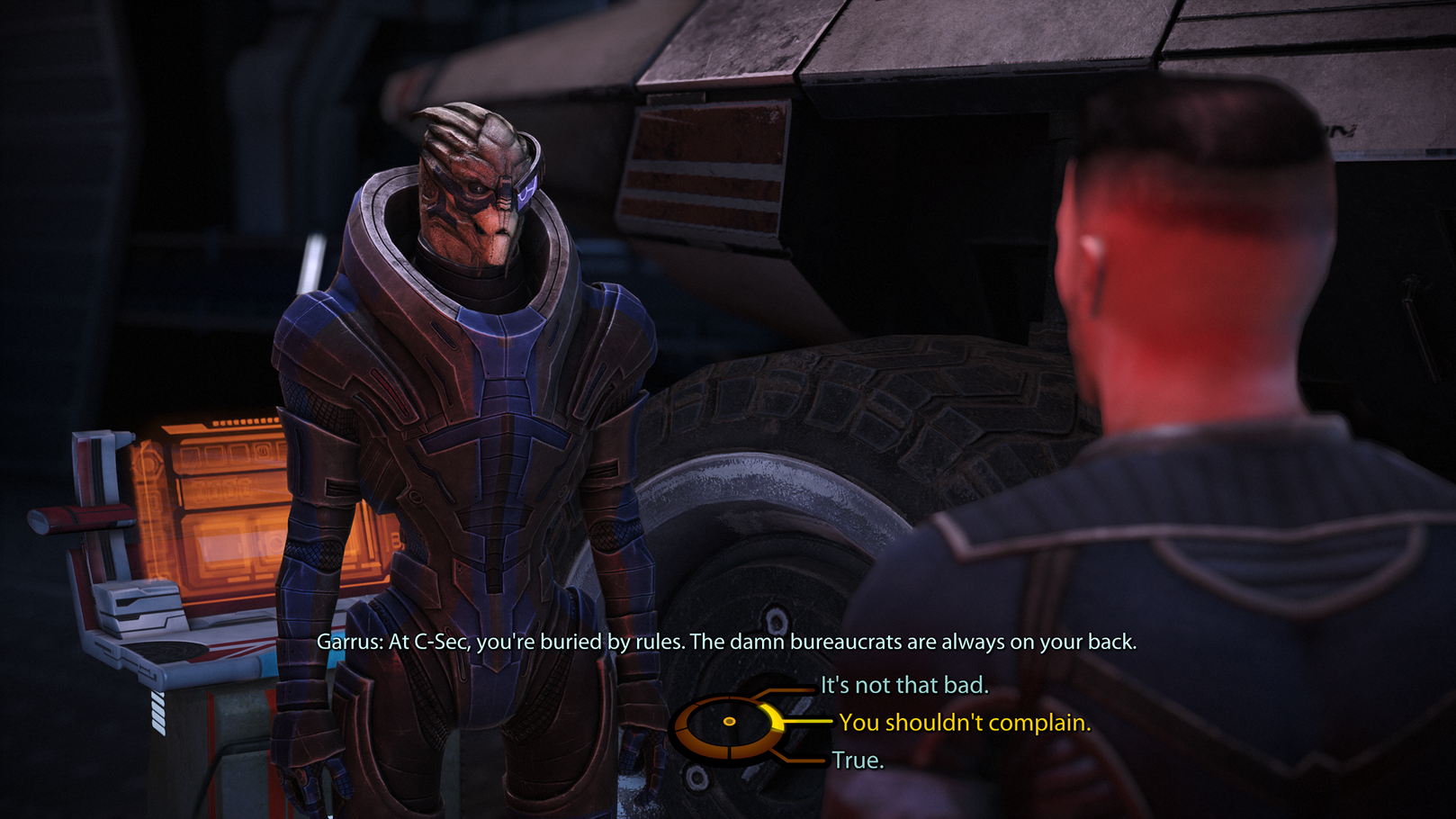 Garrus’ Renegade streak is also more nuanced, though. Shepard’s Renegade actions are usually pulling the trigger or barking at someone for no reason – it’s the dickhead in the leather jacket telling someone to piss off purely because they’re in their peripheral vision. With Garrus, there’s a kind of Renegade swagger – after recruiting him and seeing his scar in Mass Effect 2, he’ll say, “Ah, probably for the best. They were all ignoring you and hitting on me. ‘Bout time you got a fair shot.” Later on, he’ll open up about the betrayal that led to this, ditching the humor for the kind of ruthlessness Renegade is truly about – his Mass Effect 2 background is basically “Ruthless Sole Survivor” from the character creator psych profiles. He’ll talk of the human adage “an eye for an eye, a life for a life,” before saying “he owes me ten lives – and I plan to collect.”

It’s everywhere. There’s a scene in Mass Effect 3 at the end of the Citadel DLC where Brooks is running away. You’ve got a Renegade interrupt prompt that gives you the option to shoot her – if you don’t Garrus does. “You know, I meant for that to be a warning shot,” he says. “Ah well.” It’s a mistake, sure, but he still acted while fully recognizing the possibilities for it to go wrong, and he still sees it as more of a casual whoopsie than anything else.

Garrus’ most Renegade line, though, occurs at the end of Mass Effect 2 if you haven’t secured his loyalty and send him to lead the strike team. He dies in this instance, but before he does, he’ll say, “Sorry, Shepard. Won’t be with you at the end. Snipe one for me, would you?” It’s casual, unafraid, and – let’s be real here – pretty badass. Garrus is a good guy with a bad streak, a person who means well but has made enough tough decisions to be numb in the face of a true dilemma. He’s not cold, but he’s calculating, and I think Paragon Shepard, with all of their utopian ideals and Live, Laugh, Love one-liners would be awful without him. Even if you’re not Renegade, Garrus ensures that Mass Effect is – without that, Paragon Shepard just wouldn’t be believable.