Home » Reviews » Hitman 3 is the first game to get Argentina right, and hopefully not the last

Hitman 3 is the first game to get Argentina right, and hopefully not the last 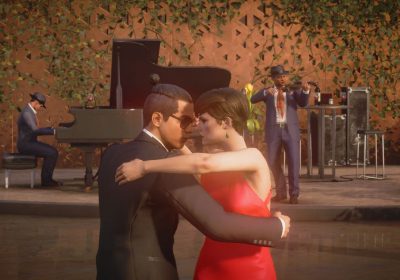 Take our mittened hand and let Polygon’s Winter Games package for 2021 guide you through the playground of wintertime games — what’s great, what’s not, and what exciting features await you in the games coming out in February and March.

“Look at the gorgeous view,” a woman tells her friend as she prepares for a selfie. “Everyone’s going to be beyond jealous.”

Her description certainly matches the picture, formed by lush vineyards, a massive winery, and a clear view of the Andes contrasting the sky, absorbed by a suffocating golden hour. As I continue making my way ahead, a journalist signs off from a briefing about the event being held at the winery: “I am Pam Kingsley, reporting live from Mendoza, Argentina.”

The mention is enough to make me smile, but I still can’t quite believe that Agent 47 is setting foot in this corner of the world. My doubts quickly dissipate when I arrive at the reception and am transfixed by the first few notes of a tango. Pairs of dancers take hold of the area, following the rhythm of the South American melody to utmost precision as my eyes get lost in the moment.

I can’t help but feel emotional — it’s the first time I’ve gotten to witness my culture portrayed like this.

As an Argentinian person, it’s hard to expect representation in video games. When I first saw that not only my country, but specifically, Mendoza was one of the locations for Hitman 3, I couldn’t believe it. If there’s any mention of my home in media, it’s often about Buenos Aires, so this made for an even more surprising announcement.

But I remained skeptical. IO Interactive described it as “one of the most well-known wine regions in South America,” a location that makes for “the perfect place to take in the beautiful sights and acquired tastes of Argentina.” This isn’t far from the truth, but it’s not uncommon to expect disparities whenever my country is re-created outside the Southern Hemisphere.

In 2013, a Call of Duty: Ghosts mission set in Argentina’s Santa Cruz had the locals speaking with a Mexican accent, and the province wasn’t really explored much outside of the scripted path. Four years later, Tom Clancy’s Ghost Recon Wildlands presented an open-world map based on Bolivia, but its depiction was met with controversy, to say the least.

A lack of proper research is immediately noticeable. Cultures often end up portrayed through stereotypes, and languages are deprived of proper accents, stripping identities in the process. But it’s not about individual ignorance; rather, it comes down to English’s hegemony over the game industry. A recognition of the massive audience for Spanish-language media, for instance, is long overdue. Everyone was surprised when the Spanish streamer David “TheGrefg” Martínez broke Twitch’s record a few weeks ago with over 2 million viewers while he announced his Fortnite skin, as if communities around gaming content creators haven’t been gigantic in both Spain and Latin America for years now.

Seeing faithful NPC animations for tango in Hitman 3 was enough to make for a sweet entrance, but I wasn’t expecting that attention to detail throughout the mission. You can see Agent 47 tasting wine, while he gives the bartender a delicate rundown of its flavor and texture. There’s a hilarious conversation around a missing torch for the asado pit that later becomes part of a challenge. And, because this is a Hitman game, a tour of the winery becomes a series of death traps, but not without full descriptions from the guide about every step of the winemaking process.

It’s all part of an assassination playground, but being able to recognize the names and references myself felt oddly different. During my time with the mission, I couldn’t stop remembering playing Hitman: Blood Money in 2006, when I wasn’t even fathoming the idea of seeing Argentina as a possible location for the series. Now, 15 years later, 47 is poisoning mates and throwing Malbec bottles at distracted guards. And everyone in the world gets to be a part of it.

It’s been surreal to see people on my Twitter timeline sharing screenshots of Mendoza, gushing about the sights and the small activities scattered around the location. For most of them, this is their first time “visiting” Argentina, and luckily, Hitman 3’s portrayal gets fairly close to real life. That was not without help from a member of the team who actually grew up here and provided insight on IO Interactive’s research about Mendoza. When I mentioned this to a friend, their response was, “Well, it was expected for a level like this to have at least one Argentinian behind it.”

As much research and consultation as IO Interactive had done, it’s likely that the result wouldn’t have been the same without a local perspective. South America is often showcased as a Colombian or Mexican monolith, regardless of the actual country being referenced. Even Hitman 3 follows this trope to an extent with the accented English for NPCs in Mendoza (a decision that resulted from budgetary constraints, according to IO).

The chances of seeing our cultures faithfully depicted in AAA titles are few and far between, and something always gets lost in translation. Instead, representation tends to end up in the hands of local developers at small to mid-sized studios. These smaller teams often must change elements of their work — such as the use of their native languages — in order to appeal to a global audience.

The developers behind Blasphemous based their Metroidvania on a unique depiction of Spain’s ties with religion, and they wrote the original script in Spanish. By the time the launch was just around the corner, the team decided to focus only on English voice acting — budget was an important factor, but it was also the most viable option from a commercial perspective. It wasn’t until they sold enough copies that the developers could justify hiring local talent to voice their characters in Spanish, and finally bring their initial vision to fruition.

Meanwhile, I grew up learning English thanks to video games (and having a dictionary at hand whenever I got stuck in a quest or puzzle). I never really thought I could expect a major international studio to deliver an accurate depiction of Argentina. I’ve been waiting my whole life for a level like the one in Hitman 3, and I wonder when I’ll get to see something like it again.

I’ve spent the last few years tailoring my work, and many aspects of my life, with an international goal in mind. Activities such as trying to purchase a PlayStation 5 in my country serve as reminders that at some point I’ll likely have to move somewhere else if I want to continue making journalism a financially viable career for me. We’re so accustomed to adapting ourselves to others that we’re disappointed by how rarely we receive the same treatment from the other end. Yet walking around a fictional depiction of Mendoza gave me a sense of belonging like I’d never felt in a game before.

Representation can be as small as a properly pronounced name, or the sight of a mate on a kitchen table. But when it’s done on such a huge scale, with so much care for detail and respect toward the original location, it makes a difference — it becomes a picture worth taking.