Honey Heist and the legacy of the one-page RPG 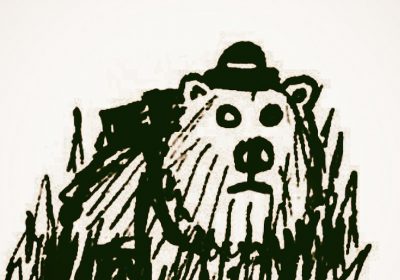 There is a bear near the top of Itch.io’s list of physical games. Roughly penned in black ink, it wears a small bowler hat and hides in some too-short grass. Its coal-lump eyes are dark with a deep hunger and an animal’s cunning, at odds with its posh headwear.

Since arriving on the digital games platform four years ago, Honey Heist hasn’t ambled too far out of the top ten or so, enjoying a stable success few other titles can boast. The extremely popular and extremely silly one-page tabletop role-playing game is the work of designer Grant Howitt. He created it in 2017 as part of his one-game-a-month Patreon promise. It’s literally a single page of text about how to be bears, stealing honey, in disguises.

But it struck a chord with the internet, becoming one of the top posts of all time in the RPG subreddit and raking in tens of thousands of views on the original Imgur upload. Critical Role, the most popular actual-play show for tabletop games, featured Honey Heist in three separate videos in late 2017, giving what might have been a flash in the pan momentum to change the tabletop RPG landscape.

That stunning, almost overnight success set Howitt on track to become one of the foundational voices in the current generation of tabletop RPG creators.

“I like to think of myself as ‘what if John Harper couldn’t do graphic design and also released a game every month before it was ready?’” Howitt said, referring to the designer of Blades in the Dark, Agon, and Lasers & Feelings — three other, lengthier, products that have cast a long shadow in the TTRPG space. Living in the United Kingdom with his spouse Mary “Maz” Hamilton, Howitt contemplates each question with long gazes out his office window before responding with either quiet skepticism or his trademark self-deprecating humor.

Howitt’s one-page RPGs began as creative exercises and ended up defining much of his online notoriety.
Photo: Grant Howitt

Howitt has been creating games since grade school, cramming downloaded PDFs through a text processor and hacking the nearly inscrutable results with a teenager’s disregard for tact or taste. In college, he fell in with the live action role-play (LARP) crowd and discovered a home both for his comedic sensibilities and his passion for building story structures. It’s also where he met Hamilton and his best friend-turned-business partner, Christopher Taylor.

After graduating, Howitt moved to Australia with Hamilton and started a Patreon to compensate his legal inability to work within that country. That’s where he designed his own full-sized tabletop games, such as Goblin Quest, which comprised dozens of pages and weeks of work. The schedule was draining and hobbled his ability to support ongoing projects, such as Unbound, his and Taylor’s first collaborative release. In 2016, Hamilton stepped in with a peculiar suggestion: focus on a single page.

“[Hamilton] had clocked that people were not buying role playing games through my Patreon; people were supporting me. They were like, ‘Cool, we like what you’re doing. We want you to do more of it. Go for it,’” Howitt said. Hamilton can’t remember where they pulled the idea from, but they knew their partner needed a new creative framework.

Goblin Quest was one of the first full TTRPGs Howitt released through his Patreon, letting players pilot starcrossed pranksters with a fatal case of curiosity.
Image: Iguanamouth/Rowan, Rook and Decard

“I was trying to get him to be okay with not finishing something or not having to be perfect,” Hamilton said. “I just wanted to give him permission to have a bit of fun, undertake a small idea and make something manageable, playable, but not necessarily comprehensive.” These games pleased Taylor’s growing Patreon audience and provided what he characterized as a pressure release valve for ideas patently unfit for their larger projects. Then the internet found Honey Heist.

Player-controlled goblins must take every risk to escape the Great Battle Camp with their lives, if not most of their limbs.
Image: Tim Wilkinson Lewis/Rowan, Rook and Decard

These early games — The Golden Sea, Big Gay Orcs, and Force-Blade Punks — are charming and rough, pen on paper in Howitt’s own hand, often cut out and scanned to create a finished PDF. The resulting documents would be thrown on image sharing service Imgur with monetization delegated as a future problem. He describes this stage as punk but full of an earnestness and honesty that people appreciated.

Released in March 2017, the simple game with two stats — Bear and Crime — passed through Imgur, Reddit, Twitter and every other major internet thoroughfare on the short route to digital fame. Howitt recalls someone sharing a formatted PDF with a homemade logo the next day, which is the version used on Critical Role. That moment didn’t quite make Howitt feel as if he’d made it, but sitting in a Scottish hotel room the night before an uncle’s funeral and watching several famous strangers play his “quite silly game” felt nonetheless momentous.

“Believe it or not, the very first games I made were ‘published’ on Imgur because I saw that Honey Heist did the same thing,” Mui said. “Honestly, we were all modeling ourselves after Honey Heist in one way or another. Then Itch.io came along and we all migrated there.”

Mui has since released several titles through Itch.io and crowdfunded the Our Shores anthology project with several other Southeast Asian designers. Taylor describes one-page TTRPGs as “so easy you’ve probably already done it twice already” but also as an art form that easily realizes the value of the creator’s ideas — a powerful tool for those without access to more traditional training.

Hamilton agrees: “One of the fantastic things about Honey Heist is that it democratized play in a way that a lot of other games have tried to do,” they said. Through a self-professed combination of privilege, talent and a heap of luck, Howitt and Honey Heist arrived at the cusp of Kickstarter’s popularity and the rise of Itch.io as a serious alternative to Steam for selling independent games.

The class of young designers who cut their teeth on The Witch is Dead, Trashkin and Honey Heist have leveraged his punk tendencies and adept balancing of comedy and emotional vulnerability to create today’s experimental zines, poetic lyric games and cavalier assurance that collaborative play can happen anywhere, in any form.

Howitt still chafes against the concept of having a legacy, claiming, “I’m famous for what amounts to a Lasers & Feelings hack.” Harper himself said Howitt’s one-page games are positioned adjacent to a long history of play that flirts with brevity: the work of Fiasco creator Jason Morningstar, his own Lady Blackbird, and the 200-Word RPG Challenge. Still, Harper agreed it’s difficult to discount Howitt’s contemporary influence. For their part, Hamilton and Taylor lovingly mocked him over the whole mess.

Heart was the third full-setting TTRPG Howitt and co-creator Chris Taylor published, detailing a world of nightmares and the living core that powers it.
Image: Felix Miall/Rowan, Rook and Decard
Spire portrays a world of rebellion and downtrodden dark elves who will pay any cost to cast off their oppressors.
Image: Adrian Stone/Rowan, Rook and Decard

Howitt is much happier and excited when discussing his more fully realized TTRPG settings, Spire and Heart, places he created to share with and inspire other people. The former finished a recent Kickstarter campaign with the support of 1,964 backers, while the latter is the system powering the latest season of Friends at the Table — an actual-play series led by Austin Walker with more than 3,929 Patreon supporters. The company he started with his friend, Christoper Taylor is called Rowan, Rook and Deckard. They recently hired full-time employee Mina McJanda at a living wage — a fact all three were proud to share.

In the world of Spire the Ministry plots the dark elves’ freedom, but they need the help of shadow collectors, weird cultists and zealous dock thugs to claim victory.
Image: Adrian Stone/Rowan, rook and Decard

Howitt seems laser-focused on giving back. Even his game-a-month promise morphed in the beginning of 2021 to become a collaboration with a curated selection of up-and-coming indie game designers, who have the opportunity to share in his Patreon’s funds.

The creator of Honey Heist, the little game that became everyone’s second-favorite tabletop title behind Dungeons & Dragons, still has a long lifetime in front of him, but Howitt at least hopes his audacity continues to inspire fledgling artists wondering if they, too, can create games.

“Showing people that you don’t need to have a bunch of money or time to create something which is resonant and give people a fun experience,” Howitt said. “And I hope that people saw what I did and were like, ‘Well, if he can do it, I can.’ If there is a legacy, I hope that was it.”