If You’re Not Using These Techniques, You’re Playing Halo Wrong 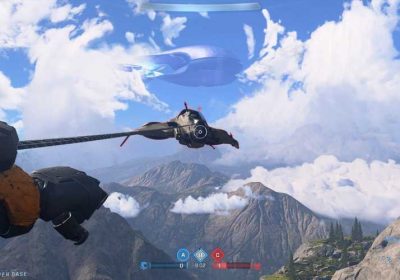 Judging by my timeline, there are a lot of people getting into Halo Infinite that don’t have a lot of experience with the series. As a PC player, I missed out on almost every Halo game when they first came out and was only able to play them thanks to the Master Chief Collection and Game Pass. As a layman, there are a lot of hidden techniques I’ve discovered from watching clips on Twitter and Reddit. It may seem like an old-school shooter, but there’s some surprisingly deep tech in Halo Infinite once you start messing around with all the new weapons and equipment. Halo veterans might scoff at some of these plays, but Infinite’s a new game, and I’m sure there’s bound to be a few things here you didn’t know you could do – even if you consider yourself a Halo pro.

There’s a couple things about flying vehicles you might not know. The Wasp and Banshee are invaluable tools for suppressing enemies and covering a lot of ground quickly in Halo Infinite’s Big Team Battles, but there’s a lot you can do with them that might not seem obvious. For example, flying ships can’t take on passengers normally, but check out this clip of Twitch streamer NadeGod who managed to carry two teammates on the wings of a Wasp all the way across the map. He flies below the canyon wall to avoid being seen, then drops off his teammates right on top of the enemy flag. Like a Mission Impossible scene, the flag carrier is able to hop back up on the Wasp as NadeGod hauls ass back to their base. It probably isn’t an easy move to pull off, but that isn’t going to stop me from trying it in every game I play for the rest of my life.

If you’ve played more than a few rounds of Infinite, you’ve probably been the victim of a grapplejack. The new Grappleshot is a great way to get around the map, but it's also useful for carjacking because it allows you to steal someone's car without having to get close enough to get run over. Grapplejacking Warthogs and Razorbacks is common, but you may not have known you can grapplejack Wasps and Banshees too. Unfortunately, the range of the Grappleshot is pretty short, so unless the enemy flier is strafing close to the ground, it seems like it would be pretty impossible to latch onto them. The trick is to use your environment to climb closer to the ship. The cooldown on the Grappleshot is short enough that you can effectively Spider-Man up a wall until you’re within range of a ship. Check out this clip from The Trophy Room Podcast host Joseph Moran who taught me how to grapplejack like a pro.

Another tip about vehicles: the weaponless Razorback car can actually hold the flag. This clip on Reddit from u/Matictac shows them grappling then capturing the enemy flag three times using just a Razorback to ferry it back to their base. You can carry the flag in the Warthog too, but you’d need to have a passenger hold it. This is the only vehicle that lets you solo cap the enemy flag.

Here’s some things about grenades I didn’t know. This clip from Game Informer Podcast host Alex Van Aken shows that you can shoot grenade stations to blow up the grenades. Getting a kill this way rewards you with a Remote Detonation badge.

You can also shoot grenades out of the air to trigger a remote detonation. This has apparently been possible since Halo 4, but a lot of people might not know about it. I didn’t, and really, who else matters? The grenades themselves even deal damage if you can manage to hit someone directly with one. Halo Infinite is a grenade focused game, so learning these techniques will add valuable tools to your arsenal.

One of the most powerful pieces of equipment in the game is the Repulsor, but it’s hard to tell what exactly is even doing when you use it. Activating the Repulsor will cause your Spartan to raise their first and unleash a shockwave that blasts grenades, rockets, vehicles, and even other Spartans away from you. The most obvious use for the Repulsor is to deflect grenades when you can’t move away from them, but it has some lesser-known uses too. Whenever the enemy team starts wreaking havoc with an energy sword and hammer, it can be smart to equip a Repulsor to knock them away from you before they can strike. You can also boop enemies off the side of certain maps for a free kill. This clip from Reddit user u/Niberus shows how you can use the Repulsor to quickly move piles of Power Seeds across the arena in Big Team Battles. Work smarter, not harder.

Redditor u/AnonDooDoo shows how easy it is to knock people and vehicles into the center pit whenever they hit the jump pad on Launch Site. This is especially useful for capture the flag since people are always using this jump pad to get to the flag quickly.

Here’s a cool combo you should keep in mind. Throwing a grenade behind someone that’s rushing you and then using the Repulsor to knock them back into it. In the clip, Redditor u/Letsgetmouldy uses it to repel an enemy with an energy sword, but you can use this technique for anyone that chases you.

I’ll keep track of any new techniques that I come across. Feel free to send me cool Halo clips to [email protected] or DM me on Twitter @epicswitzer.