Kingdom Hearts III Re:Mind Review: An Ode To The Sweaties

Kingdom Hearts III Re:Mind is an expansion for last year’s Kingdom Hearts III, the long-awaited finale to the Xehanort Saga. Re:Mind contains a 4-5 hour campaign that is essentially a repeat of Kingdom Hearts III’s final act with some new cutscenes and additional playable characters. Once completed, a separate mode unlocks called, Limit Cut, which offers 14 of the hardest boss fights in any Kingdom Hearts game. Limit Cut is a dream come true for hardcore players, but for the casual Kingdom Hearts player, Re:Mind doesn’t bring particularly satisfying content, especially for the price.

The final act of Kingdom Hearts III is a blur of boss fights and character resolutions at breakneck speed. Sora rushes from battle to battle, fighting the 13 seekers of darkness in groups and eliminating them two or three at a time with barely a moment of closure for each one. All of the guardians of light are finally brought together, their individual character arcs quickly wrapping up as you barrel towards the final showdown with Master Xehanort. It’s messy, poorly paced, and pretty monotonous. 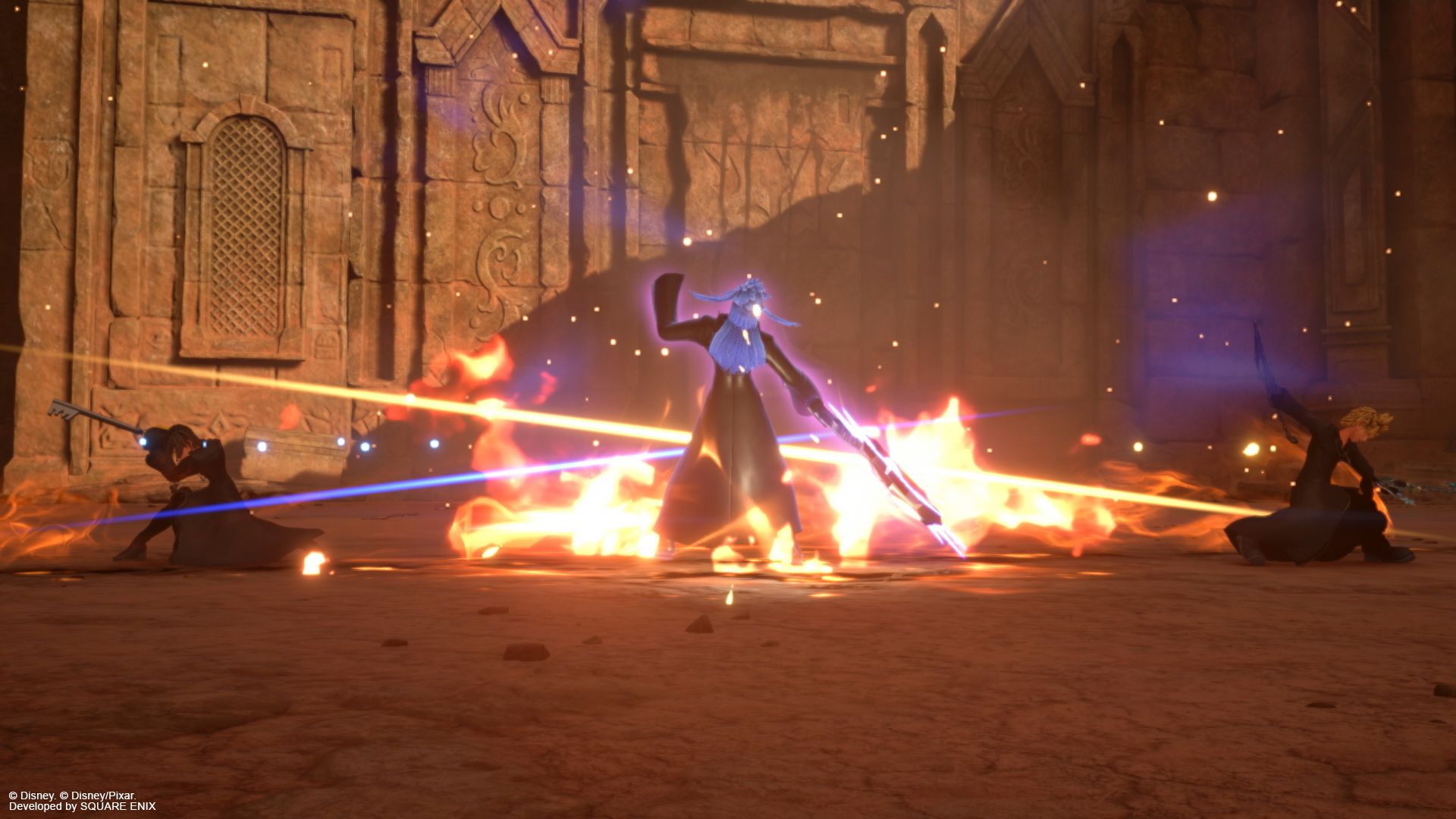 Re:Mind is, pretty much, that entire sequence again, albeit a slightly improved version. After having abused the power of waking to rescue his friends, Sora uses it once more to save Kairi, whom Xehanort had killed before the final battle. Sora meets with Chirithy again in The Final World who informs him in no uncertain terms that finding her will have a tremendous cost. Sora, ever the fearless hero, throws caution to the wind and embarks on a timey-wimey adventure.

In typical Kingdom Hearts fashion, the events of Re:Mind create twice as many mysteries as it resolves, as Sora is sent back to the beginning of the Second Keyblade War to intervene at opportune times. There are about two hours of cutscenes in the four hours of “new” content, and I believe about an hour of those cutscenes are new. As far as gameplay, you’ll be replaying the entirety of the Keyblade Graveyard sequence, including an easier version of the secret boss. During the group fights, you’ll have the option to play one round each as Riku, Aqua, and Roxas. These fights are just as easy as they ever were, however, so I didn’t really get a “feel” for each character’s playstyle because I one-shot steamrolled through all the fights, but playing as those characters was a treat all the same.

Eventually, you’ll make your way to Scala Ad Caleum with some time on the clock before your past self makes it there. Now a fully explorable area, you’ll need to collect the scattered pieces of Kairi’s heart to save her. Everything from this point on feels like a better version of the finale we got in the original game. Narratively, I think the do-over ends up working pretty well, and it even goes to some length to explain many of the loose threads in the first version of this sequence. Like Harry Potter rescuing his past self with his Patronus, the seeds of this time travel plot were planted in the original. Kingdom Hearts often feels like Nomura is making it up as he goes along, so any evidence of forethought is appreciated. Taken as a whole, Re:Mind does look suspiciously like cut content, but there are enough satisfying moments in this do-over that I don’t think Kingdom Hearts fans will be too upset. The problem is there just isn’t enough. 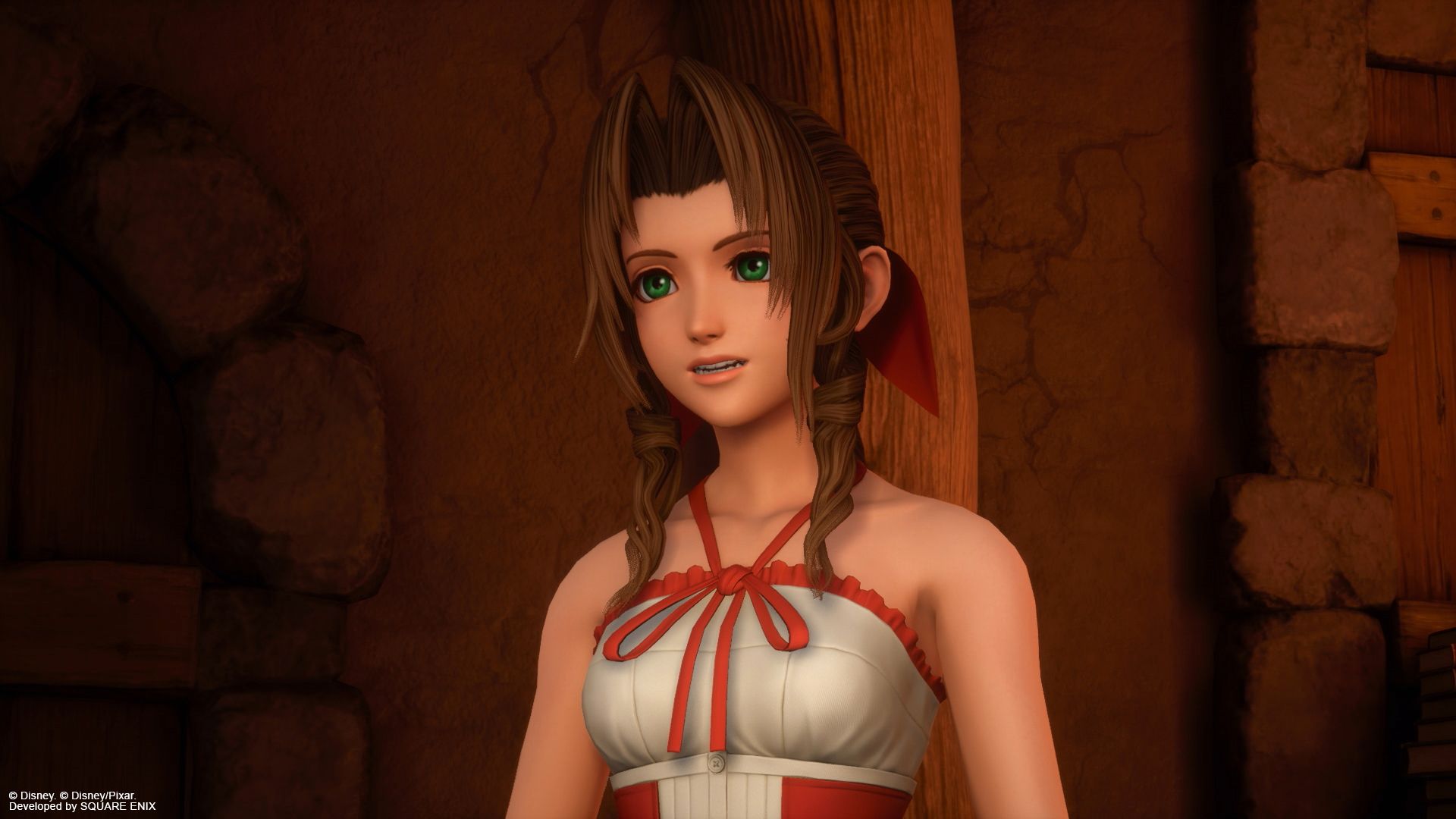 Be Careful What You Wish For

Kingdom Hearts 3 wasn’t really for anyone. That’s not to say no one liked it, rather, it just didn’t push far enough in any direction to satisfy any of the core groups of Kingdom Hearts fandom. The character customization was too basic for the RPG fans, the combat was too floaty and over-simplified for the hardcore fans, and the story has been so built up over 13 games that it really had no chance of a worthwhile conclusion. This expansion deserves a lot of credit for Limit Cut, an unbelievably hard challenge mode for hardcore players. It redeems one of the games biggest flaws, and elevates the combat in Kingdom Hearts III to one of the better entries in the series. 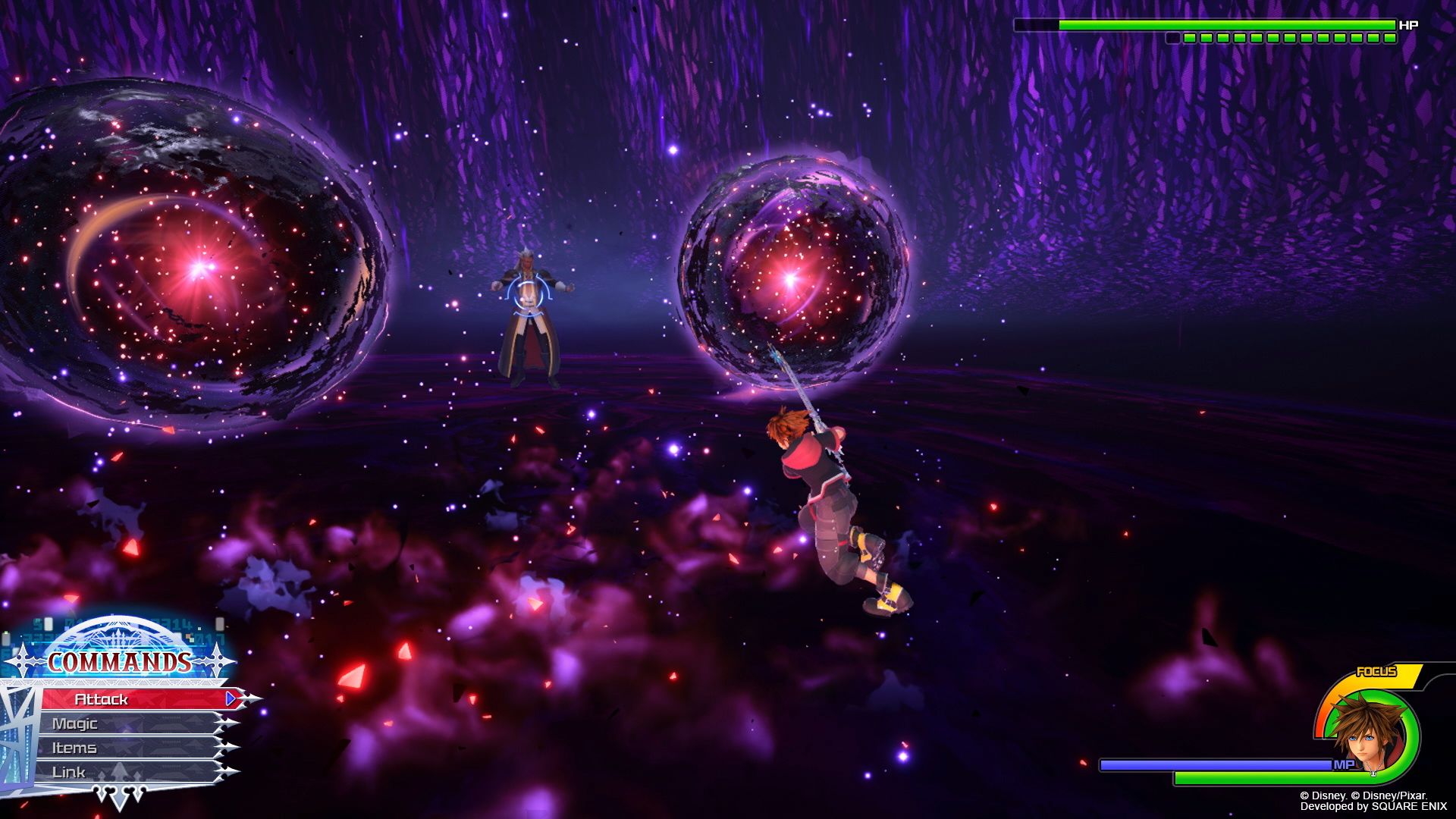 Hardcore players treat Kingdom Hearts like a sport. Kingdom Hearts II level 1 critical runs could make even Dark Souls players cry, and Kingdom Hearts players are always looking for new ways to make the games as hard as possible. I’m not one of those psychos. I’m usually pretty satisfied with playing the games on Proud mode, beating all the optional bosses, and calling it a day. I think it’s safe to say, though, that the sweaties are getting their monies worth with Limit Cut.

The addition of new animation-cancelable abilities makes combat against these brutally difficult enemies actually feel pretty smooth and fair. There’s no way to out-level these bosses either. At level 99 with the best equipment in the game and a maxed-out Oathkeeper (another new wonderful addition that came with this week’s update), I’m getting absolutely housed by these data boys. You MUST learn their attack patterns, block and dodge precisely, and strategize your moves around their openings. I can’t stress enough how real these fights are compared to every single other fight in the entire base game. If meaningful combat was what you were missing the most from Kingdom Hearts III, Re:Mind’s got it. 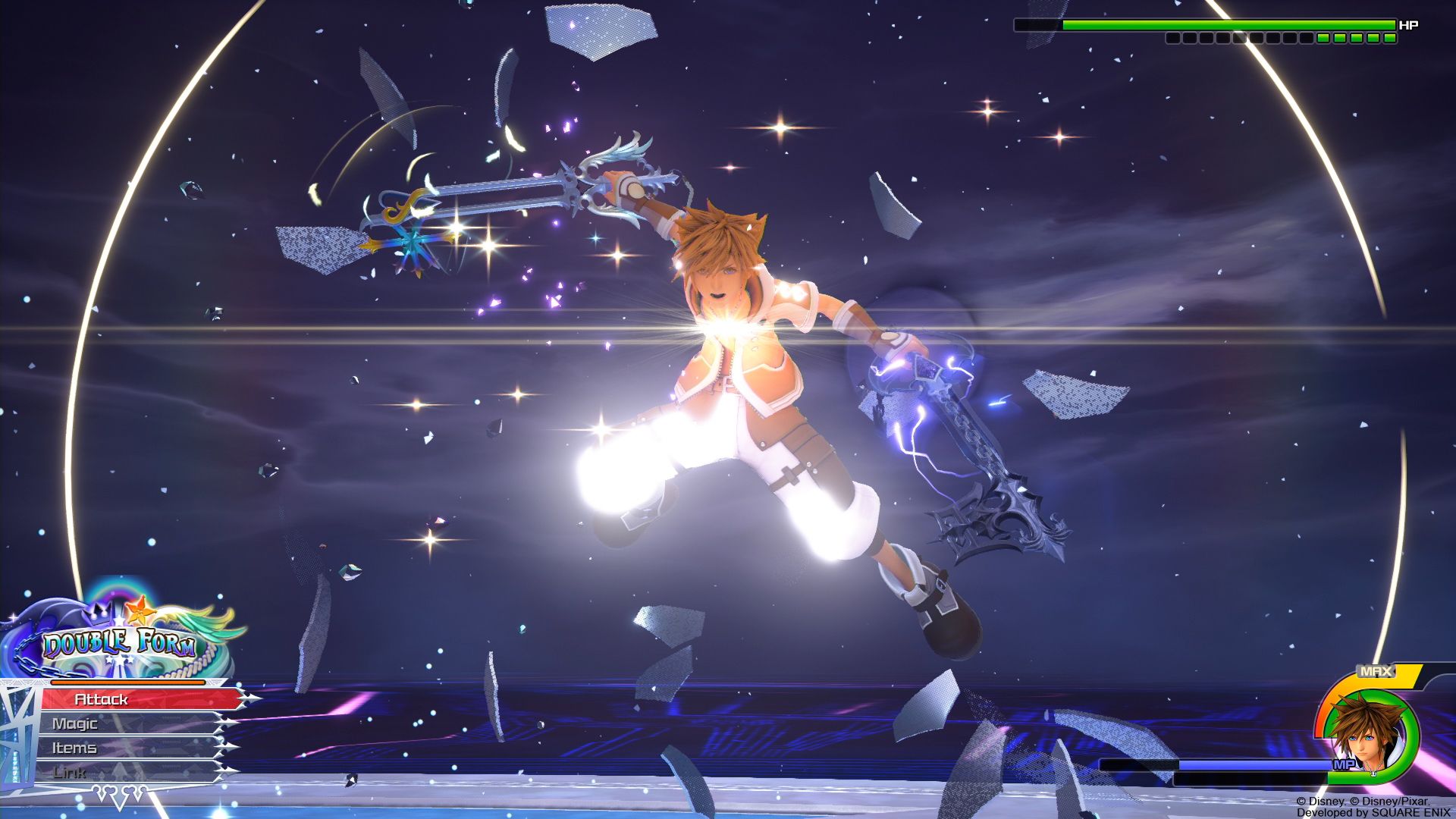 At $30, Re:Mind was bound to disappoint players expecting new worlds, story, and gameplay. I myself started out pretty disappointed at the story content of the expansion, despite generally being pleased with how the do-over played out narratively. The notion of 14 super bosses was pretty daunting, and I found myself thinking, “Is this really it?”

Back-up, re-frame, and realize that Limit Cut is Nomura making good on a broken promise. Limit Cut brings the pain that hardcore Kingdom Hearts fans desperately crave. If you’re not into super bosses, save the $30 and just watch all the cutscenes. If you miss the challenge that Sephiroth, Lingering Will, and the Enigmatic Man brought to the games, you’re in for a treat.

A PlayStation 4 copy of Kingdom Hearts Re:Mind was purchased by TheGamer for this review. Kingdom hearts Re:Mind is available now for PS4, and available February 25th, for Xbox One.