Magic: The Gathering does Gothic horror with Innistrad: Midnight Hunt 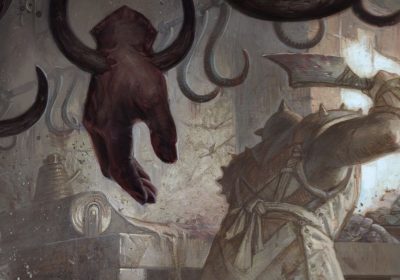 The nights are getting longer in Magic: The Gathering. With the next set of cards, called Innistrad: Midnight Hunt, the overall mood turns toward darkness. The set goes live Thursday in Magic: The Gathering Arena. It pits powerful creatures like werewolves, zombies, and ghosts against a thin line of human defenders. Compared to Wizards of the Coast’s recent playful crossover with Dungeons & Dragons, the setting is decidedly more grim. We talked with world-building and narrative design manager Meris Mullaley and product architect Mike Turian to learn more. They also brought along a few exclusive new cards to share with Polygon readers.

Making a new set of Magic cards is a complex endeavor that takes place years in advance of release. There are mechanical concerns, of course, which involve making sure that new cards are compatible with the old. But designers also need to keep tabs on the ongoing metagame so that it remains rich and engaging for dedicated players.

Also, you just sorta need to change things up a little every now and then.

“It’s like a coordinated dance between the creative and game design teams,” said Mullaley. “We might be looking at a really fun, lighthearted setting. OK, now we’ve got something that’s darker and a little bit more spooky. Because across the whole year, creatively, you want something that everybody can get excited about.”

Midnight Hunt isn’t just the Magic team’s annual emo phase. It comes after Adventures in the Forgotten Realms because those cards that preceded it are also intended to complement it. The same is true with all of the Standard-legal cards, a subset of the entire Magic franchise that turns over with the release of this next set.

Adventures in the Forgotten Realms

“Creature types are something that have both a creative and mechanical arc,” Turian said. And so a set with lots of humans and other monsters pairs well with Midnight Hunt, which will be chock full of werewolves and other Gothic horrors. “But Standard is also rotating. With the release of Midnight Hunt, a lot of what we’re doing is trying to look back not directly to [a set like] Forgotten Realms, but looking at what’s leaving the environment. What are some of these core staples that are needing to be replaced?”

One such staple: dual lands, which Wizards is replenishing with the newly dubbed lastlands revealed on Sept. 2. But there are plenty more reinforcements where those came from.

Image: Ryan Yee/Wizards of the Coast

Cathartic Pyre is a new card, but it has nothing to do with catharsis. A cathar is a priest in the world of Innistrad, and this art represents a traditional death ritual in the realm. Mechanically, the card serves an important function in the game.

“Dealing 3 damage to a creature or a planeswalker for 2 mana is a very straightforward effect,” Turian said. “Especially in limited, I see this as a pretty sought-after card.”

Anything that adds more cards to the graveyard will pay dividends for players who have invested in certain strategies, he said. For instance, Strixhaven: School of Mages’ Lorehold college used the graveyard extensively to bring powerful new creatures onto the battlefield. The card should also provide fans of Magic: The Gathering Arena the kind of flexibility they need to remain nimble. The new digital version of Magic is often played as a best-of-one match between two players, so Cathartic Pyre can serve double duty in those decks.

Image: Lake Hurwitz/Wizards of the Coast

The subject matter in Memory Deluge is even more ominous, showing a woman forced to destroy a tragically young vampire. But again here, mechanically, the card fills several important roles.

Turian notes that players who prefer blue mana are always looking for other cards that will let them draw additional cards into their hand. They’re also looking to search through their deck, and this card allows both.

As a bonus, this card can also be cast from the graveyard. Once used, its ability to look at seven different cards makes this a potential gateway to a late-game finisher. All that blue players have to do is go find one in the deck, and then play it whenever the time is right.

“I think it can be a nice combo,” Turian said.

Meanwhile, The Meathook Massacre fulfills a staple space that black decks need to stay viable. But it’s much more precise than similar cards that deal damage to every creature on the table.

“Anything that’s dying is getting you a reward,” Turian said. “One of the nice things about here is, not only is it filling that space of a staple, but if you’re actually playing a larger toughness creature, a lot of [similar cards] just wipe out everything. Where here, you can have more control over what gets killed off.”

Innistrad: Midnight Hunt arrives for Magic: The Gathering Arena and Magic Online on Sept. 16. Pre-release week kicks off on Sept. 17, with a full physical release on Sept. 24. The set includes Draft, Set, Collector, and Theme Booster packs of cards, a proper bundle for getting started, and two Commander decks — Undead Unleashed and Coven Counters. Pre-orders are available now through your friendly local game store and online.

Correction (Sept. 10): This article has been updated to accurately note which Magic: The Gathering sets will be Standard-legal after Sept. 24.