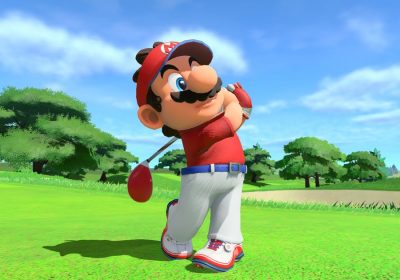 We’ve had a series of Mario Golf games over the years on various Nintendo consoles but this is definitely one of the best.

And it’s not so much the bog standard golf game that’s really shining here on the Switch machine.

It’s the fun, arcade-style side games on Super Rush that really makes this title stand out from the crowd.

It all seems pretty straight forward at first, and very familiar to previous golf games.

Cutesy graphics with 16 of the most famous Nintendo characters to choose from – so you’ve got your Mario, Luigi, Donkey Kong and Wario all vying for your attention on the opening menus, each with their own attributes, skill qualities and special moves.

You hit the lush greens and it’s tap the shot button once to get the metre rising and a second time for the speed and distance required.

Eighteen holes in and you feel like you’ve been tested well by the elements, wind, bunkers, decent AI rivals.

And if you really want to get into the swing of things you can use a joy-con controller like a real golf club and the avatar on screen will do your bidding, adding spin and curve where you want it.

But then as you start to explore the game two unique modes start standing out.

In the new fast-paced mode Speed Golf, you tee off in unison with either computer controlled players or three other pals online or locally and the race is on to sink your ball first.

It’s generally a matter of whacking the ball as far as possible with your first shot and then chasing after it in a Mario Kart-style race on foot.

When you reach your ball, it’s a quick club choice and precision shot and then it’s sprint and whack again until you sink your ball in the hole before the others.

There are items on the greens to collect to help you regain stamina and even give you a short speed boost to get ahead of the competition.

And if you’re feeling particularly cheeky you can even bump a rival out of the way as you pass them.

It’s huge fun and injects a bit of much-needed speed to what is rather a slow, genteel game otherwise on the console.

The standout star though is Battle Golf.

Nothing is out of bounds in the even more frantic variation of Speed Golf with nine holes in play at the same time.

The first player to score three holes claims the victory.

So picture a battle royale style sports dome with a load of Nintendo characters going hell-for-leather trying to pot shots across nine holes all at the same time, with special moves and hazards all adding to the craziness and you get a good idea.

It’s bonkers but feels fresh and is highly enjoyable, perfect for a group of pals and up there with Mario Kart with it’s addictive competitiveness.

The courses on offer are varied and colourful.

You’ve got lush greens but also barren deserts and lava-filled rock zones, all straight out of a Mario platform game.

And each has unique dangers, so expect to see deadly vine monsters and stacked spikey balls bouncing around trying to stop your shot.

The gameplay itself is spot-on, and whether you’re playing with a joy-con like a club or a traditional button set-up the ball always goes where you intend it to and it’s very easy to get to grips with as an amateur.

It’s also worth giving a shout out to the Golf Adventure story mode, which is almost RPG at points and gives you the chance to create a Mii character like you and build them slowly up in quality.

The more tests, trials and matches you play against the various helpers and foes you come across the better your stats become and you can choose to boost speed, accuracy, stamina and power to end up with a pretty awesome golfer on your books.

It’s then all about taking that character back into the main games to face-of against the likes of Mario himself.

Overall, one of the most fun golf games I’ve ever played.

The side games really make this title shine, not the basic traditional golf you’d expect in this package.

Battle Golf is really the star element here and shows how you can turn what is, for some, a rather dull sport and give it a real video game excitement that’ll appeal to all.