Home » Reviews » Monster Hunter: World vs. Dauntless: Which should you play?

Monster Hunter: World vs. Dauntless: Which should you play?

Developer Phoenix Labs just released Dauntless, a multiplayer game similar to the Monster Hunter franchise, on the Epic Games Store. It’s a little simpler, much cuter, and free. With Dauntless and Monster Hunter: World out in the wild, which game should you spend your time hunting in? In this piece we’ll break down each of the features so you can see how they square off. 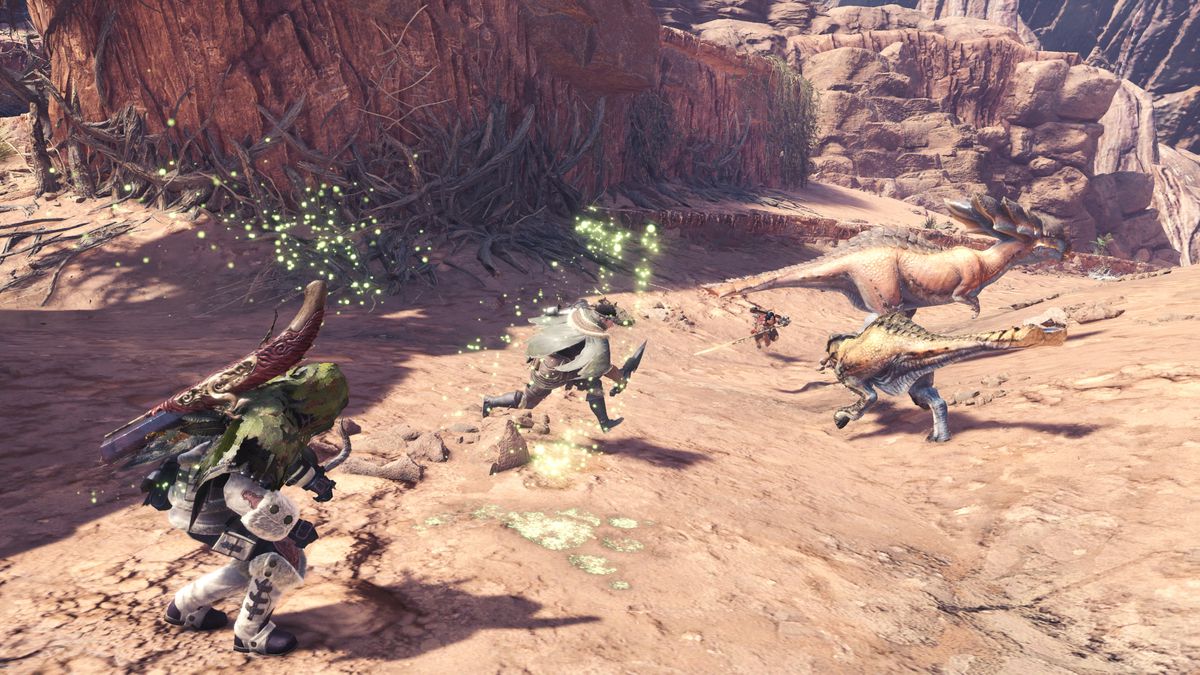 Dauntless – You’re dropped off on a floating island before setting off to find the Behemoth, Dauntless’ name for a monster. Players usually spread out, or use the lantern item to point them in the direction of the Behemoth. When one player finds them — usually after a minute of searching — they send up a signal flare. Players converge on the location and the fight begins.

Monster Hunter: World – Players have to track their prey. Depending on the monster, players will find footprints, dung, or scrapes on nearby foliage. Collecting samples increases players’ research levels on that monster, making them easier to find in the future. The more information you find, the easier it is to track the beast. Eventually, the monster will appear on players’ maps to make them even easier to locate and keep track of.

Which is better? In Dauntless, tracking isn’t really a mechanic at all. While that lets you get straight into the action, Monster Hunter: World’s tracking system makes it feel like you’re actually stalking a monster through its natural habitat. It’s really a question of which you prefer: action or strategy. 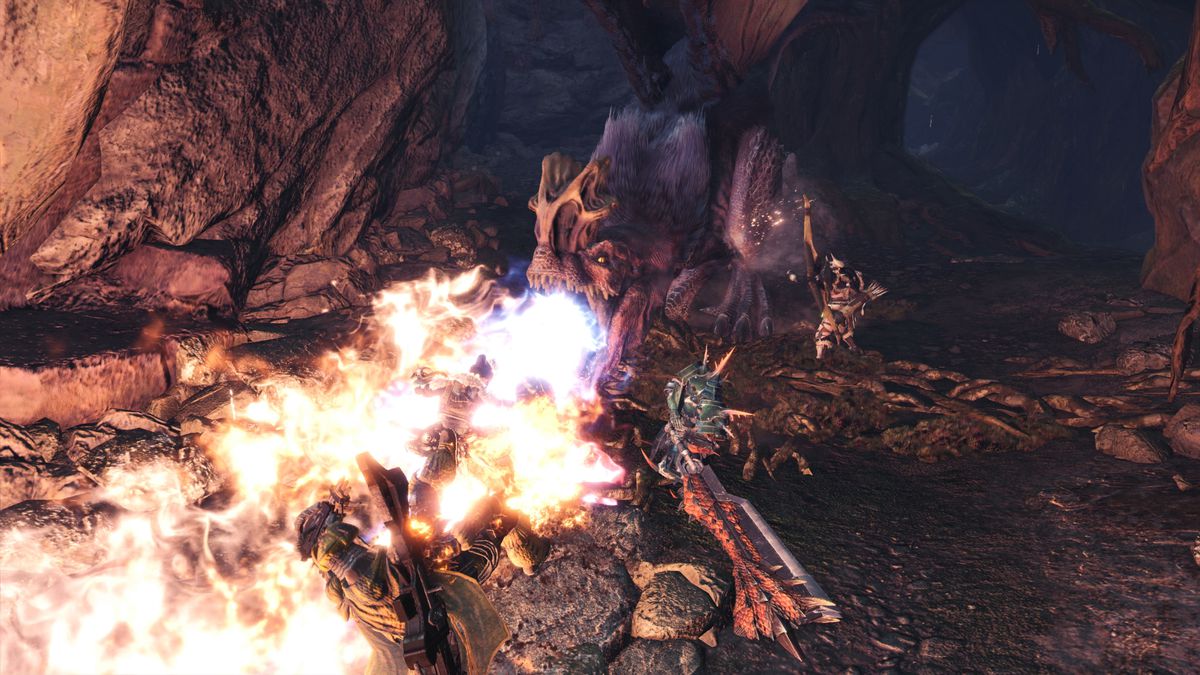 Dauntless – The Behemoths are more like difficult video game bosses than living beasts. When you corner one in an arena, it will begin its attack pattern. Each time you fight a specific Behemoth, the pattern is similar, as is the positioning before a beast strikes.

Hunting a Behemoth feels more like taking out a boss in Dark Souls than hunting a living, thinking thing. As players get comfortable with certain types of Behemoths, they can make quick work of them with perfectly timed dodges through predictable moves.

Monster Hunter: World – Monsters feel alive. Their A.I. can still be unpredictable even if players have their moves memorized. The monsters have tells for their attacks, but the way they string them together makes each fight a bit different than the last. Even if you become an expert Diablos hunter, there is a chance your latest prey could kill you if you aren’t paying attention.

The monsters also act like animals outside the hunt. They exist in an ecosystem in the world where they have their own prey. The wander, hunt, sleep, and they have a home to protect.

Which is better? Monster Hunter: World’s monsters are more interesting because they move dynamically and behave unlike most other video game enemies. Predicting their movement becomes its own skill for players to master. But Dauntless’ more rigid boss types still allow for skillful hunts and mastering fights — just in a more traditional way. 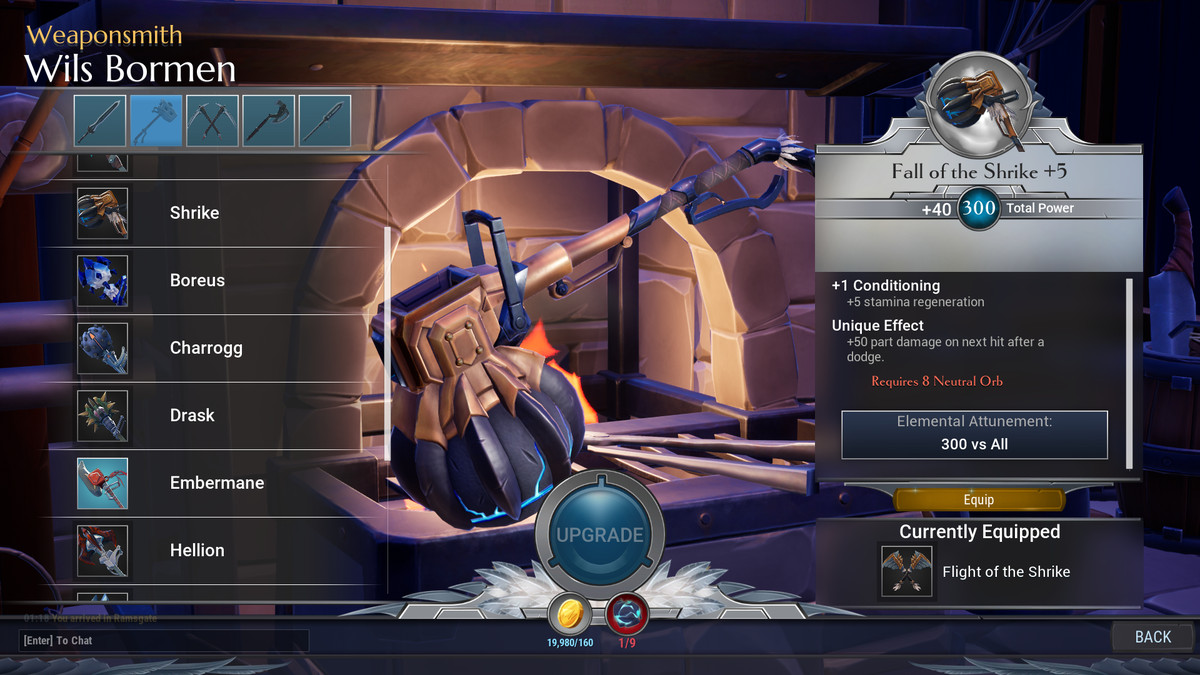 Dauntless – You take all the pieces from Behemoths back to the town of Ramsgate. Weapon and armor vendors can take your items and turn them into powerful tools for your next hunt. In the early stages, investment is easy thanks to the orb system.

Depending on the type of item you have, you can keep upgrading it with even without monster parts, instead using a general currency you get from all hunts. This means you spend less time farming the same monster over and over again for duplicate pieces to make better loot. And you’re not punished for creating one piece of gear and then moving to experiment with another.

Gear sets and weapons have stats and unique bonuses. Players can build gear pieces for different kinds of monster fights and add perks that suit their play style.

Monster Hunter: World – Gear progresses gradually. Players use monster pieces to build their weapons over time, improving them with rarer and rarer materials. To build the perfect weapon for a specific hunt, players often hunt the same kind of monster over and over again to get everything they need.

Armor comes from the same kinds of materials and have unique perks on them. Monster Hunter: World’s monsters have a lot of abilities that players want to mitigate, and armor perks help them do that with earplugs that stop loud roars from stunning hunters and other effects.

Which is better? Dauntless’ upgrades are more casual and user friendly. You’re not wasting your time hunting any kind of monster, since you’re always gaining orbs to upgrade your loot. Monster Hunter: World’s system is more tedious but keeps you playing longer. 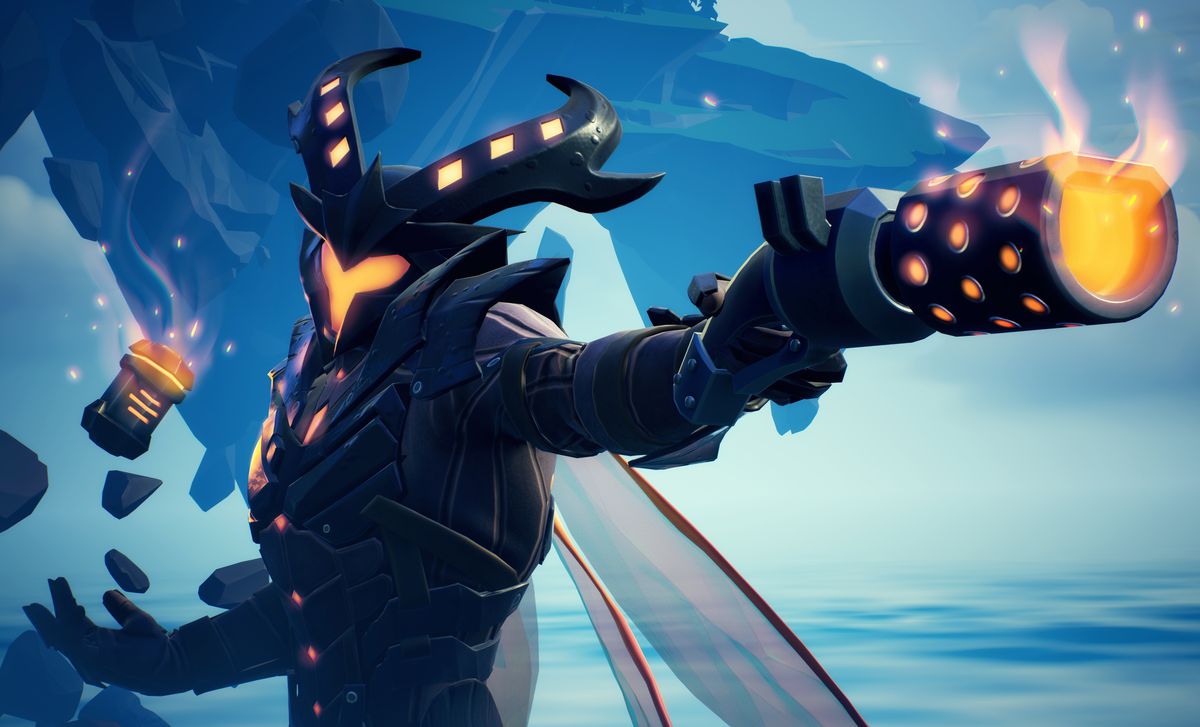 Dauntless – Combat is more arcade-like, reminiscent of a hack-and-slash game. There are combos that players can execute, and most weapons have some kind of mini-game that goes along with it. Wind up animations are long enough that a mistimed attack is punishing, but attacks move quickly and dodge-cancelling is fast.

The stamina bar regenerates very quickly and drains slowly for most attacks.

Monster Hunter: World – Attacks are slow and deliberate. Depending on the weapon a player is using, they may only get a few big hits in on a single monster hunt. Players have to time each slice and smash correctly, or the monster will interrupt the player before their attack connects. Players rely on trying to learn an animal’s behavior, so they can take advantage of some of the more complex weapons’ windup times.

The stamina bar requires a lot of focus from the player. Without items to enhance it or rest periods, the hunter tires easily.

Which is better? Monster Hunter: World’s combat is more complicated and rewarding than Dauntless. But Dauntless’ simpler combat lets you focus on the monsters more. This one comes down to preference: slow, difficult combat or faster, action-focused combat? 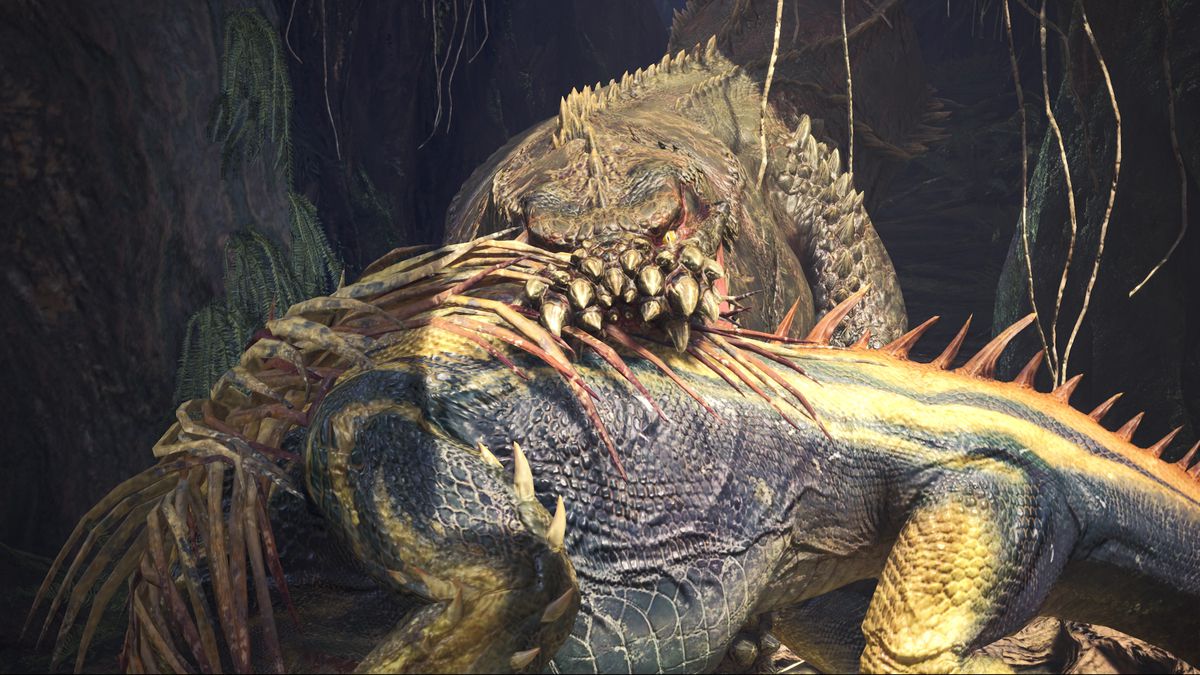 Dauntless – Players drop onto one of three kinds of biomes: ice, desert, or forest. Each arena is actually several fractured islands floating in the skies. Players jump between them to find their prey. Each arena is the same, with some rocks or trees changing up the scenery. In Dauntless, it’s all about the hunt between player and Behemoth — there are no arena traps or interactions with the world.

Players can gather plants around the world to make potions and other items.

Monster Hunter: World – Players hunt monsters in their natural habitat. There are deserts connected by underground caverns and forests that climbs up to become a mountain. Each area is diverse in flora and fauna, and players can slay smaller monsters for parts or gather items to take back to their base.

Players can also set traps on the ground or use the environment against the monster they’re hunting. Monster Hunter: World’s environments are also filled with other monsters. While you may be hunting a Great Jagras, a roaming Anjanth may decide that it wants your weakened prey for lunch. This interaction gives you a dangerous ally for a time, and keeps the world feeling alive.

Which is better? This one is an easy win for Monster Hunter: World. Not only does the environment help the game come alive, the ability to use it against your prey adds a lot of depth to the hunts. 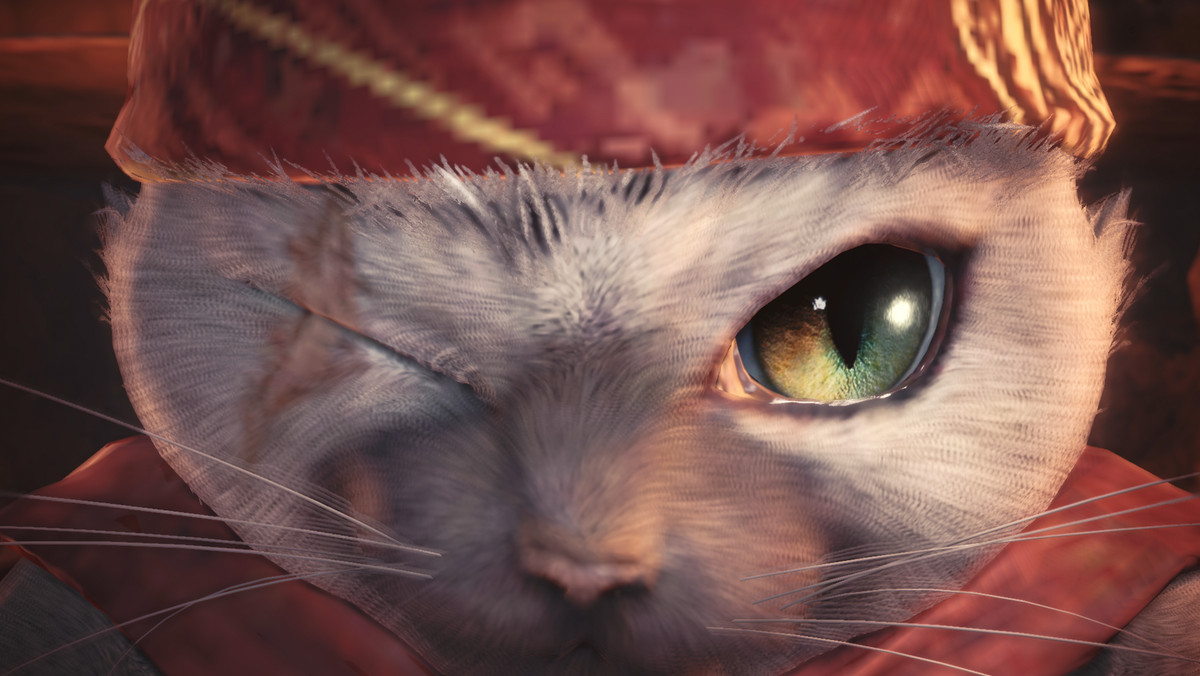 Dauntless – Players can prepare tonics and offensive items like grenades in Ramsgate. After building and equipping these items, players are ready to go on a hunt. If you’ve already stocked up on these items, you’re immediately ready to go. If not, you’ll need to take just a moment to talk to each vendor.

Monster Hunter: World – Preparing is half the battle. Even after players upgrade their gear, they need to restock some key items in their inventories like traps. They also need to go visit the Meowscular chef to eat. Eating gives players useful buffs and increases their health and stamina. The type of meal players eat can drastically change the difficulty of a fight. This usually takes several minutes, including the lengthy cutscene of watching the Meowscular chef cook your meal.

Which is better? In Dauntless, you can get in and out of a hunt in minutes. Monster Hunter: World takes some serious preparation, and dying in the upcoming hunt means you lose your food buff. We give the edge to Dauntless for this one. 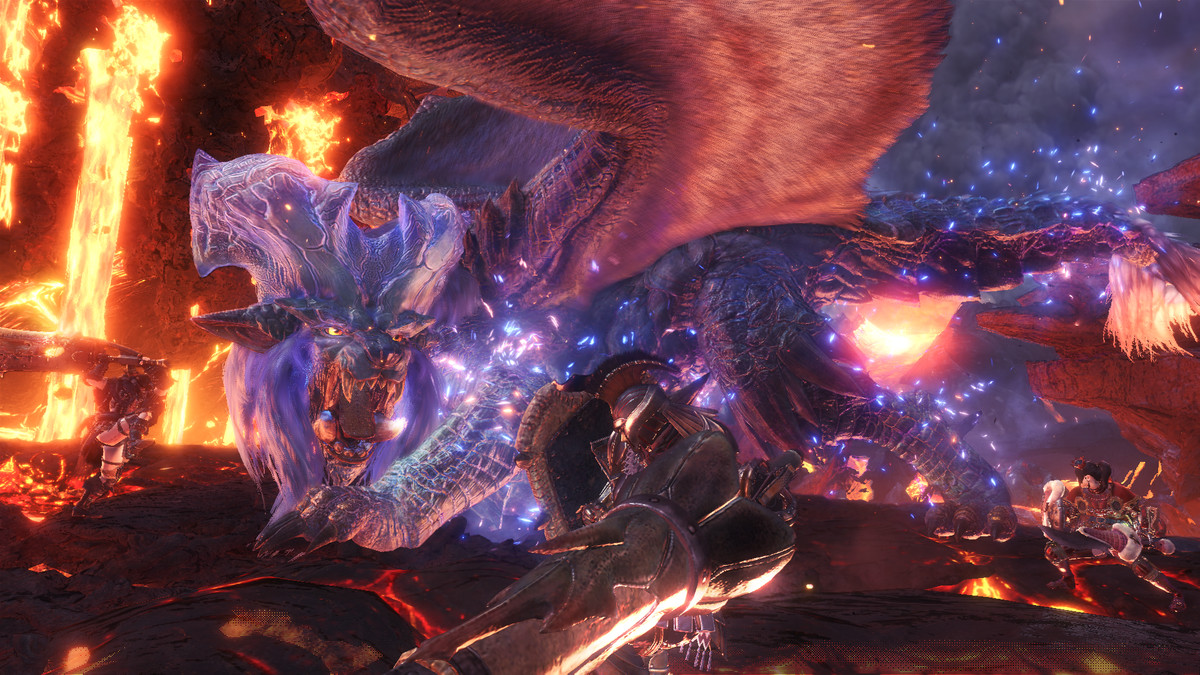 Dauntless – It’s difficult to fail a hunt. Players start each hunt with five potions and three self-revives if they go down. If they don’t have a self-revive or don’t want to use one, allies can revive them after a short animation. As time goes on and players get hurt, a danger meter goes up. At 100 percent danger, downed players stay down permanently unless they can self-revive. Players need to either kill or drive the Behemoth they’re hunting away to lower the danger level. If all players die at 100 percent danger, the team retreats and the hunt fails.

Monster Hunter: World – Failing is easy. A team of players have three lives collectively. When the lives are up, the hunt fails. A single player can die three times and it still counts as a loss. The hunt immediately ends and players need to start over.

Which is better? In this case, the two games couldn’t be more different. Dauntless’ relaxed difficulty is perfect for the more accessible, action-based game it’s trying to be. And Monster Hunter: World’s punishing difficulty works well with the slow, satisfying pace of its combat. Do you normally like your games normal or hard? 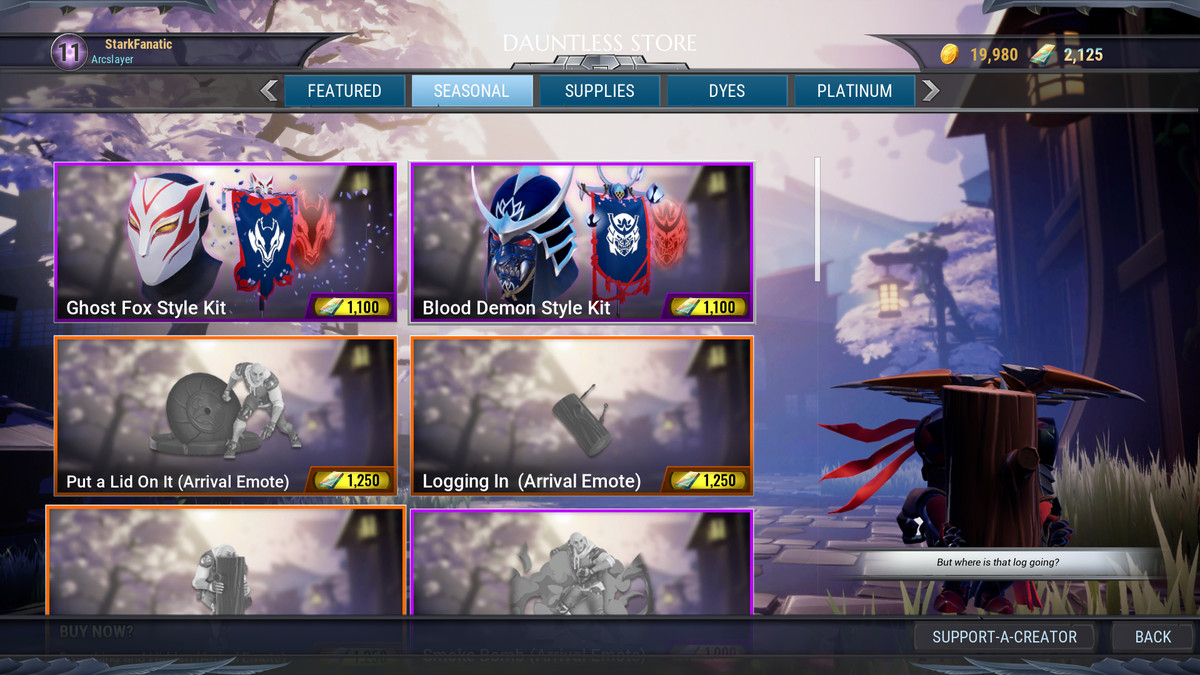 Each season of Dauntless also has a Hunt Pass — much like Fortnite’s Battle Pass — that rewards players for progress and offers unique rewards every few months. Players can use real money to upgrade their Hunt Pass to a better version for better cosmetic rewards.

Dauntless also offers cross-play between PlayStation 4, Windows PC, and Xbox One. Players who want to switch where they play can also connect their accounts to never lose progress with the cross-save system.

Which game is for you? 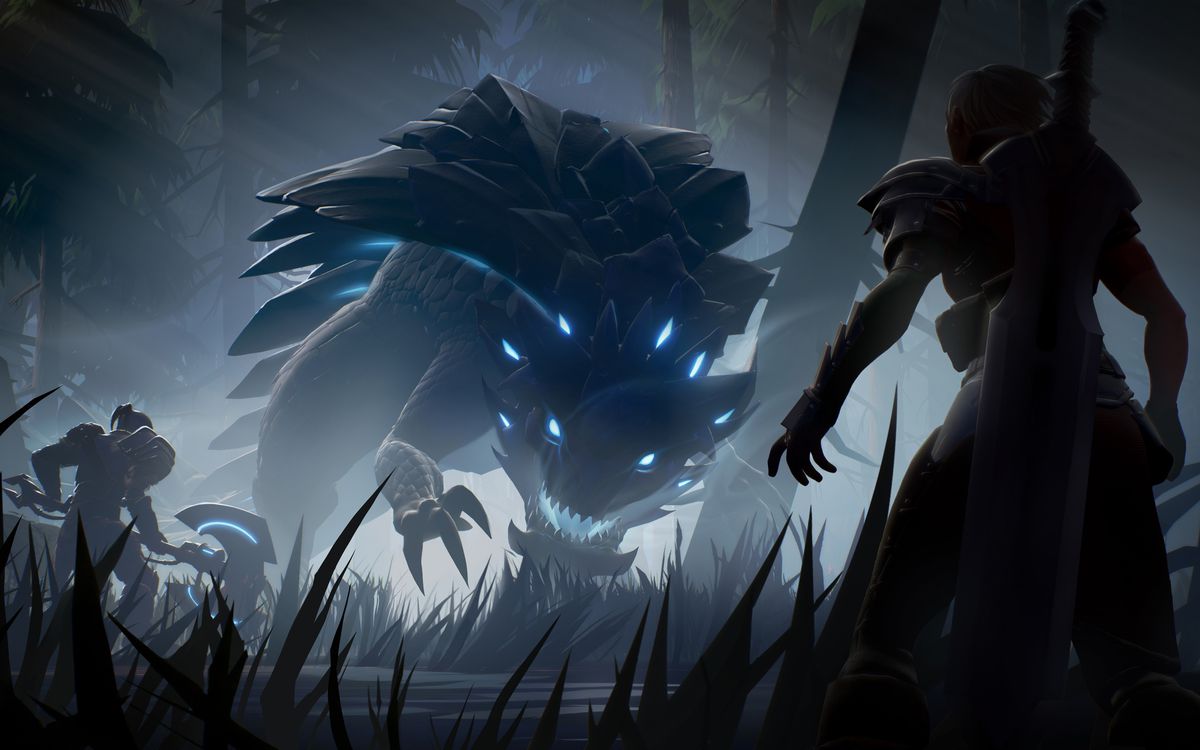 Dauntless is a less hardcore, more friendly monster hunting game. The combat is less rewarding, but still fun to execute. The monsters feel less alive, but still interesting to fight.

The art style of Dauntless really sells a more interesting fantasy world than Monster Hunter: World’s realistic dinosaur look. Dauntless is vibrant, cheerful, and relaxing to play in the opening hours. It’s the perfect starting point for a player interested in monster hunting or for someone who just wants to hang out with friends. Dauntless also has something new to play and check out every few weeks.

But Monster Hunter: World is still the king monster hunter when it comes to skill and gameplay. It can be very frustrating, but taking down a Tempered Deviljho is more satisfying than anything we’ve felt in Dauntless so far. The skill it takes to defeat that beast is something players only gain after dozens of hours in game and a lot of investment. That said, Dauntless just came out, and we haven’t had a chance to hit the late game yet.

The choice between the two comes down to accessible and fun for Dauntless, or difficult and more satisfying for Monster Hunter: World. 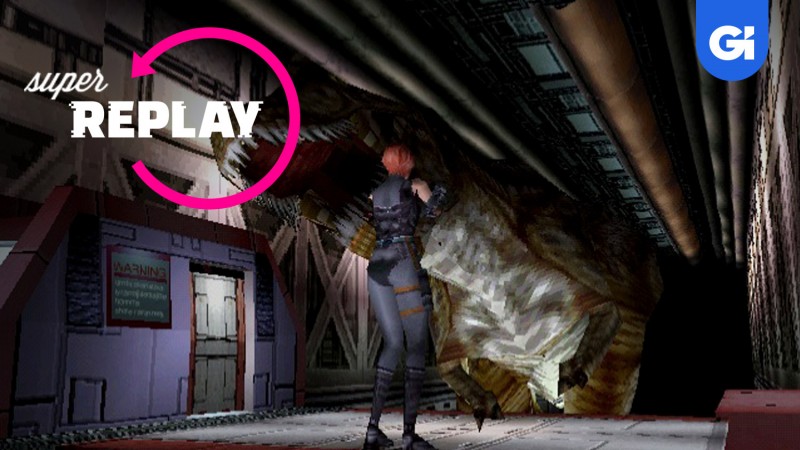 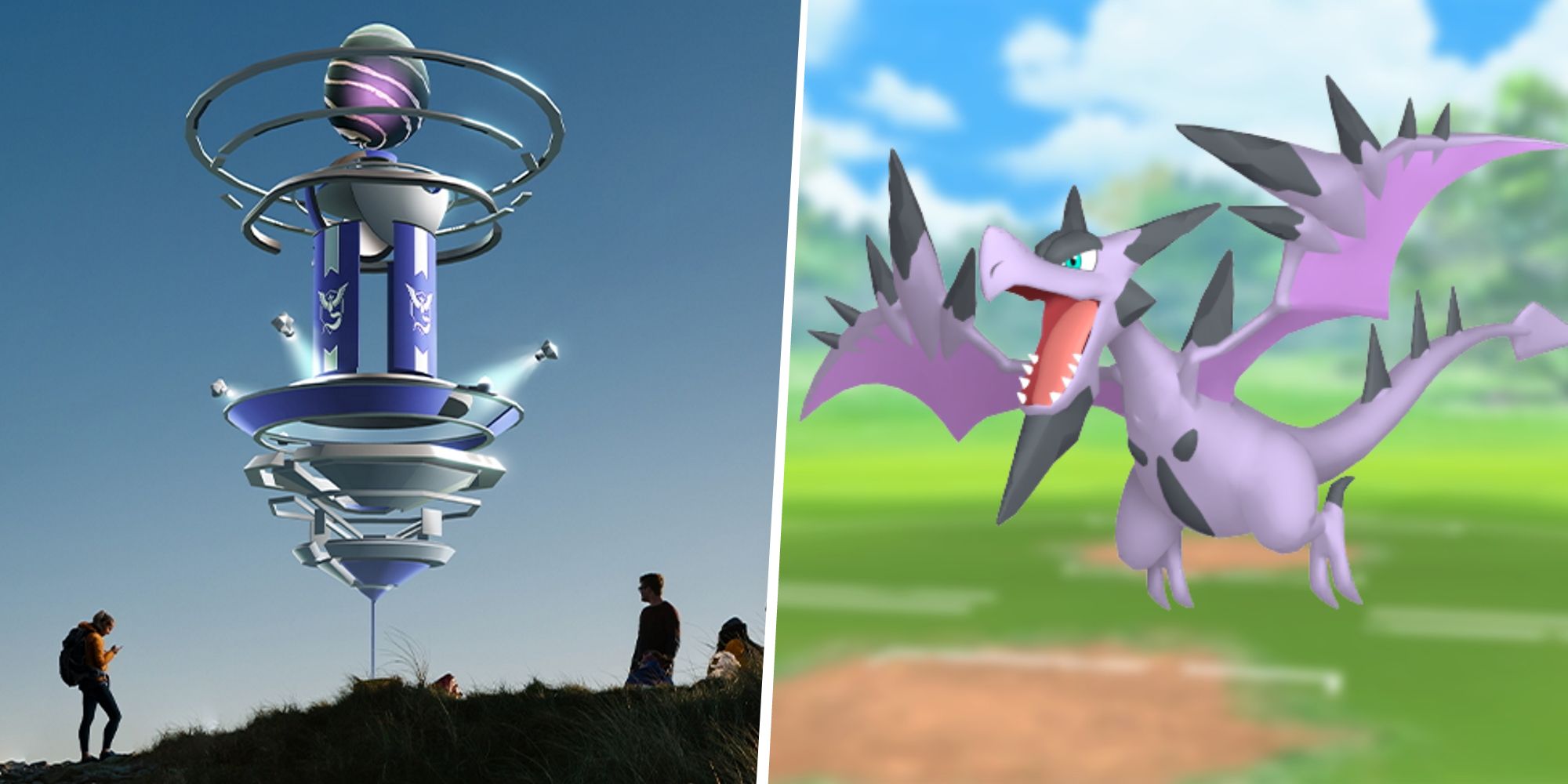 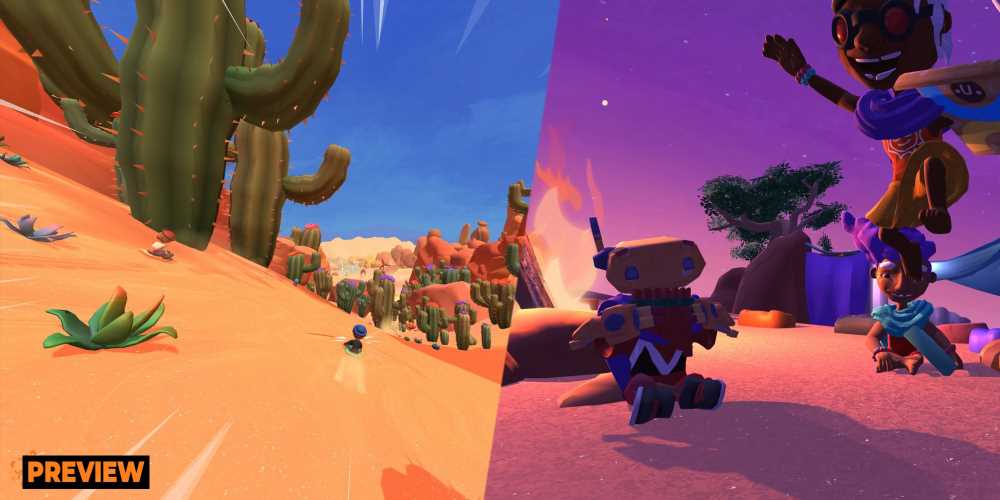 Tray Racers Preview: The Calm And The Storm