Home » Reviews » Most video games ask me to do everything, which makes doing nothing so fun

Most video games ask me to do everything, which makes doing nothing so fun

Some things are built for nothing.

In Oakland, California, there’s the Morcom Municipal Rose Garden, simply called the Rose Garden by Oakland residents, with its pathways that circle the ground like a shield protecting its visitors from obligation. The artist Jenny Odell describes its allure, the “architecture of nothing,” in her book How To Do Nothing, released by publisher Melville House this year.

The architecture of nothing places value in curiosity, the ability for someone to do nothing — at least, nothing as Odell defines it in her book: the stuff that sits outside of “capitalist productivity,” where our worth isn’t defined by the things that are quantifiable at work or elsewhere. “Architecturally, the Rose Garden wants you to you stay awhile,” writes Odell.

Like the Rose Garden, technology is often designed to keep us around, to stay awhile, but not in a way that truly serves our needs. “Many of us find our every last minute captured, optimized, or appropriated as a financial resource by the technologies we use daily,” Odell explains.

There’s nothing harder to do than nothing, she says.

If we’re using the definition of nothing that Odell describes in her book, then there’s a lot of nothing to do in A Short Hike.

Developed by Adam Robinson-Yu, A Short Hike is an exploration game centered on a short trip up a mountain with an Animal Crossing–esque bird called Claire. Claire’s dropped off at the base of the mountain to enjoy time with her aunt, a park ranger that works in the area. But Claire’s hesitant to do much of anything at first; she says waiting for a phone call. She quickly learns that there’s no service in the area, and that’s why she initially takes off to the top of the mountain — to use her phone.

The game subverts my instinct to win games, to beat them. I started A Short Hike with a plan to get to the top of the mountain as quickly as I could. I live and work in a world where things are so easily quantifiable, and I find this instinct seeping into a lot of what I do. And so I approached A Short Hike in the same way — just see why Claire wanted to use her cell phone so bad, then I could explore what the world had to offer. Like I said, I wanted to win.

Controlling Claire, I closely followed the signs pointing to Hawk’s Peak, talking to strangers only when I thought they might be able to offer me something. I made it a ways up the mountain, picking up stuff in my path here and there, until I accidentally led Claire too close to the cliff’s edge. Naturally, I fell off.

Because Claire’s a bird, though, she can glide down to safety, and she ended up right where she began. I did this a couple more times, trying to rush up the mountain only to fall back to the base.

I was missing the point. Robinson-Yu’s vignette invites me to spend some time exploring a virtual mountain, not just rushing towards a goal. See, I did it again: “spend.” My instinct is to assign time value, as if I must make the most of it. A Short Hike encourages me to stop, and to instead do whatever I choose, like explore an area closer to the ground, where I have little risk of falling.

In that exploration, I found a frog on a beach willing to trade for a new shovel, something I knew I might need given the dirt plods I noticed on the ground. I also saw the shadows of fish darting just under the water’s surface, a hint that I might be able to catch one somehow. 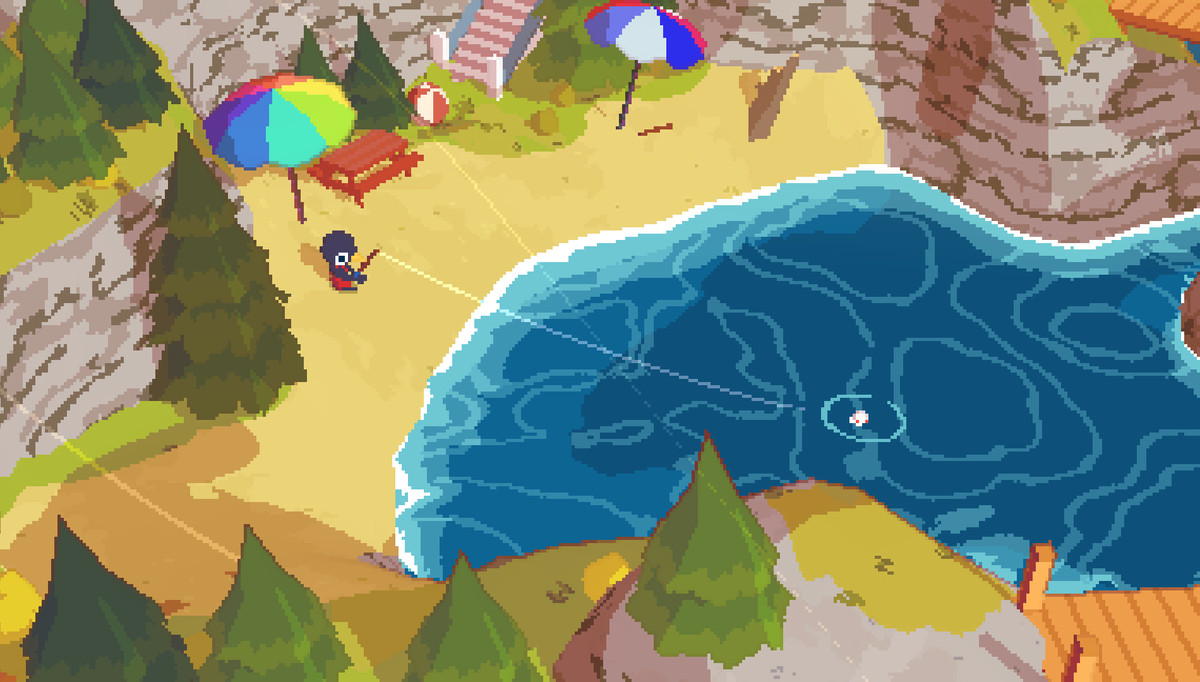 We’re to assume that Claire’s world is much like ours, that technology is embedded in her culture in some meaningful way — enough that she’s willing to hike up a mountain to use her data plan. Though we later learn that Claire’s not embarking on this journey to just shoot off some dumb tweets, the setup kicks players off with an implied critique of how so many of us over-engage with technology. And yet, A Short Hike is not a blunt, shallow critique; the game’s ending makes a much more interesting statement than just that all technology is bad.

Instead, A Short Hike is, simply, but potently, a master class in the art of nothing, of engaging in meaningful attention.

The mountain in A Short Hike is built on a foundation of nothing. Like the Rose Garden, it wants you to stay awhile.

Trails wind into knots that circle the mountain and its varying landscapes. There are loops and cliff edges, dead-ends that lead you right back to where you started. There are beaches and buildings and interesting animals dotted along the pathways and nearby, but you’re forced into little of it. There is no one way to take the hike — you could, instead, choose to spend your time fishing in a small pond, never making it to the top at all.

But the systems in A Short Hike encourage exploration. The world is filled with tiny things to see and hear. It even feels like the walking controls, which I found a bit finicky, are designed intentionally to slow the proceedings; they’re unwieldy, and I walked off plenty of cliffs and had to retread what I often thought was already covered ground only to find myself looking at those same areas with a different perspective.

Claire does need to find golden feathers to make her way up the mountain. This acts as a way to encourage exploration, but gently. You’ll never find them if you don’t explore, which means you need to look around if you want to make it up the mountain. And if that’s not what you feel like doing, that’s also OK. There are a whole lot of things outside the game’s initial suggestion at a goal, opening the world up for curiosity and unquantifiable exploration.

It took me just over a half hour or so to deprogram, to not see A Short Hike as a goal to be completed and more an opportunity to be savored.

I collected seashells and picked up sticks. I hoarded these things, stuffed them in Claire’s pockets with coins and fish found on the beaches and in the sea. You catch a whole bunch of different fish, all of which are pretty to look at and collect, but you can’t do too much with them after that — but it doesn’t make the experience any less enjoyable. (My second favorite thing to in A Short Hike after fishing is playing a version of stick volleyball with another character on a beach. Finally a use for those sticks Claire’s been carrying around!) 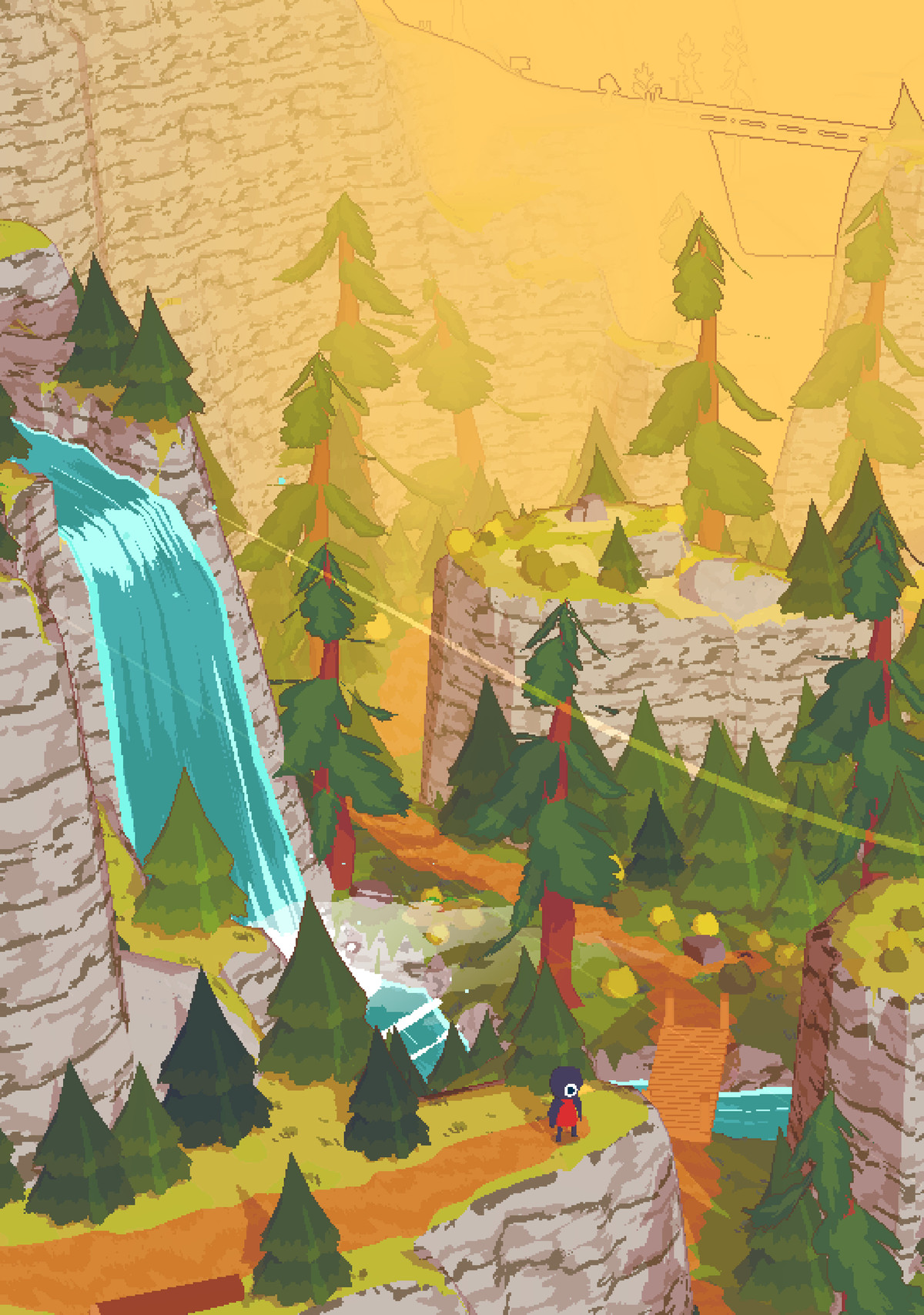 I find myself busy in this game, and yet, I’m doing nothing in particular. My actions don’t all add up to a singular purpose or meaning. I do things because they bring me joy, not because they’re bidding for my attention.

In her book, Odell defines the attention economy as “the buying and selling of attention.” The literal version of that, Odell said in an interview with Vox this year, is the measurement of engagement: “how much time someone spends in an app and how much they engage with it.”

On a macro level, it’s the overarching pull of these apps that adds an anxiety to everyday life, even when they’re not in use. Expression is the commodity of social media, Odell told Vox. She puts is simply in the book: “Our aimless and desperate expressions on these platforms don’t do much for us, but they are hugely lucrative for advertisers and social media companies.”

A Short Hike is especially interesting as one of these spaces — a place for nothing — because it’s built within an industry that often engages in the sorts of technology that demand attention and quantification. The game is a subversion of technology and of nothing, a nuanced critique of what it means to do nothing and everything. After all, the game’s ending makes it clear that technology in itself isn’t the problem, and can be a place for meaningful connection.

In A Short Hike, I’ve been reminded that doing nothing can, for a moment, be everything.