My Day As A Sniper Ghost Warrior Was Uncomfortable And Gross 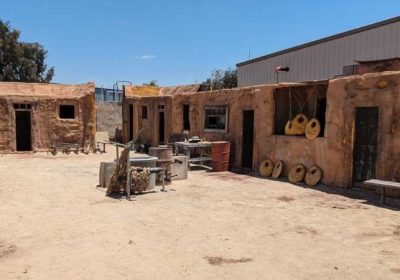 There’s nothing media types like myself enjoy more than an in-person event. They’re always a great opportunity to learn more about upcoming games, chat with developers face-to-face, and catch up with other games journalists and content creators. A lot of gaming sites, TheGamer included, are decentralized, so the only opportunity I have to meet up with my co-workers and other games writers is at conventions, press events, and in-person play sessions. I can’t overstate just how important these outings are for us and how much we look forward to them all year.

Of course, the pandemic changed everything. The last event I made it to before the lockdown was PAX East in March 2020. The same week, the ESA announced that E3 2020 was canceled. After that, an entire year’s worth of conventions were quickly called off or moved online, including Gamescom, PAX West, BlizzCon, Comic-Con, TwitchCon, Gen Con, and many, many more. I covered 12 press events for TG in 2019 all across the United States and Europe. In 2020, I watched Summer Game Fest alone in my room and cried a lot.

Earlier this month, I was invited to an event celebrating the launch of Sniper Ghost Warrior: Contracts 2. At this point, I would have taken an offer to tour a saltwater taffy factory in New Jersey as part of a promotion for the next Candy Crush Saga update (that’s a free one, Activision). I signed up immediately and drove down to sunny San Diego two weeks later for a day of Sniper Ghost Warrior-related fun.

I had no idea what to expect when I got there, partially because every press event is different, but mostly because the PR company running the event had been intentionally vague in the weeks leading up to it. I’d get funny emails that said things like, “hope you have a BLAST ;)” and “make sure you wear pants with belt loops,” which is an oddly specific request. I figured I’d get to play the game and chat with the devs, but after that, who knows. Was I going to get to fire an actual sniper rifle? My mind was racing.

I drove down on a Friday and stayed in a hotel with the other attendees. In the morning, I met the rest of the group: five writers like myself, and five influencers from YouTube and Twitch. We got on a bus without any preamble and headed 15 minutes down the road to meet the Incredible Adventures team at the Strategic Operations facility.

Strategic Operations, Inc., formerly the Stu Segall San Diego Studio, was a full-service film and TV studio built in the early ‘90s for a show called Silk Stalkings. Producer Stu Segall later converted the building into a tactical training facility for police and military personnel. Additionally, Incredible Adventures offers “extreme military counter-terrorism training” to civilians here, which is exactly what we had been signed up for.

The Strategic Operations facility looks a lot like a set you might see in American Sniper, Lone Survivor, or any other military propaganda film. The streets are paved with dirt; the broken down, abandoned vehicles are covered in grime; and the short, featureless huts look like they’re made out of mud. It’s the Middle-East as we’re often shown it via Western media – a gross, twisted doppelganger that doesn’t actually represent life in that part of the world at all. A series of nondescript yellow circles hang in one window, demonstrating that art does not exist in this society. A pile of rotten meat sits on a nearby table next to a decaying pig head, because the people here eat filth, apparently. I think I’ve painted a clear enough picture. 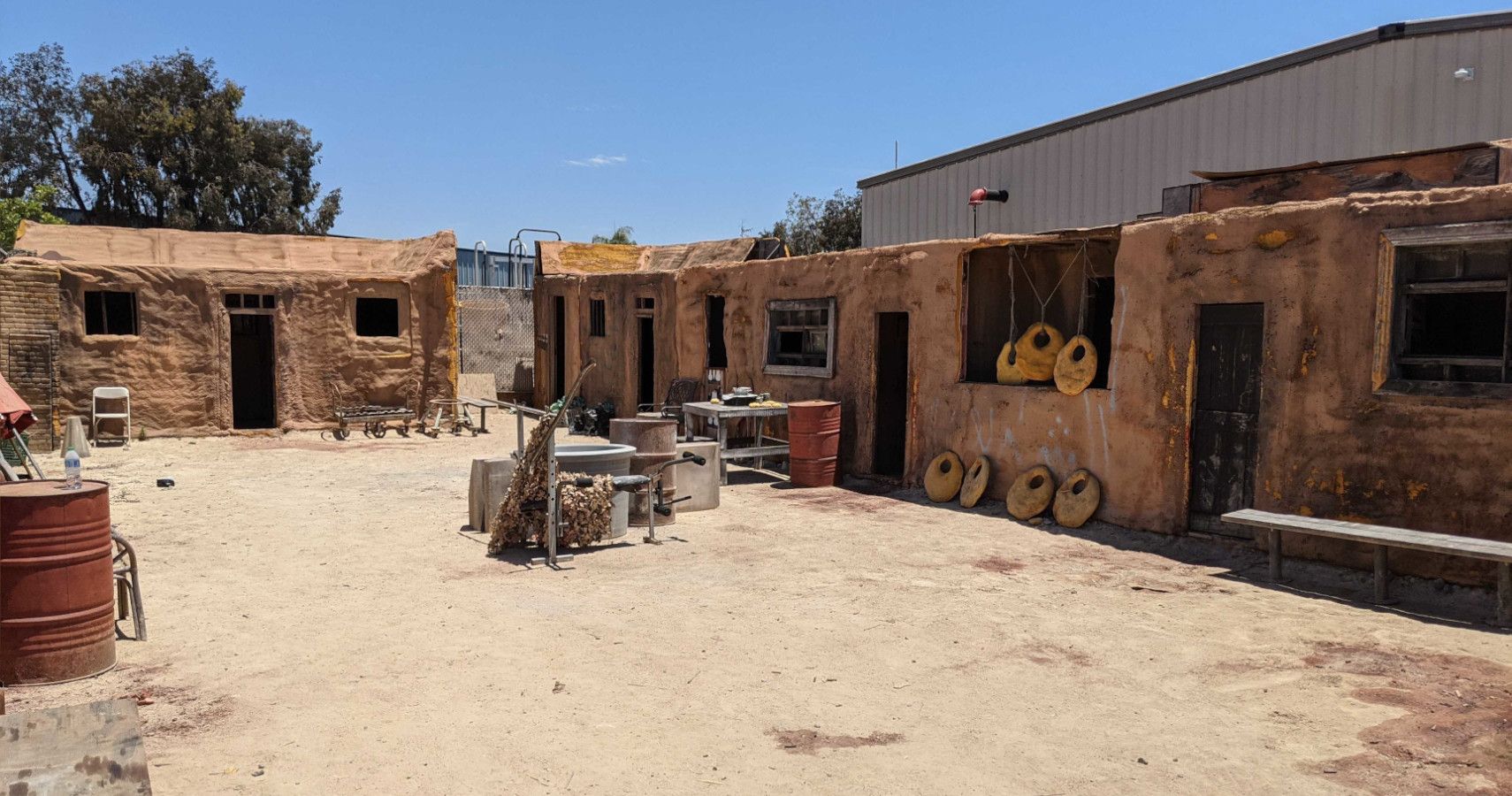 There’s a flag that says “Trump 2024: The Revenge Tour” flying on the main building, which almost makes me get back on the bus. It’s a pretty hostile message to send to everyone who uses this facility, military and civilian alike. Between that and being told that no one here will be wearing masks, I have my guard up immediately. 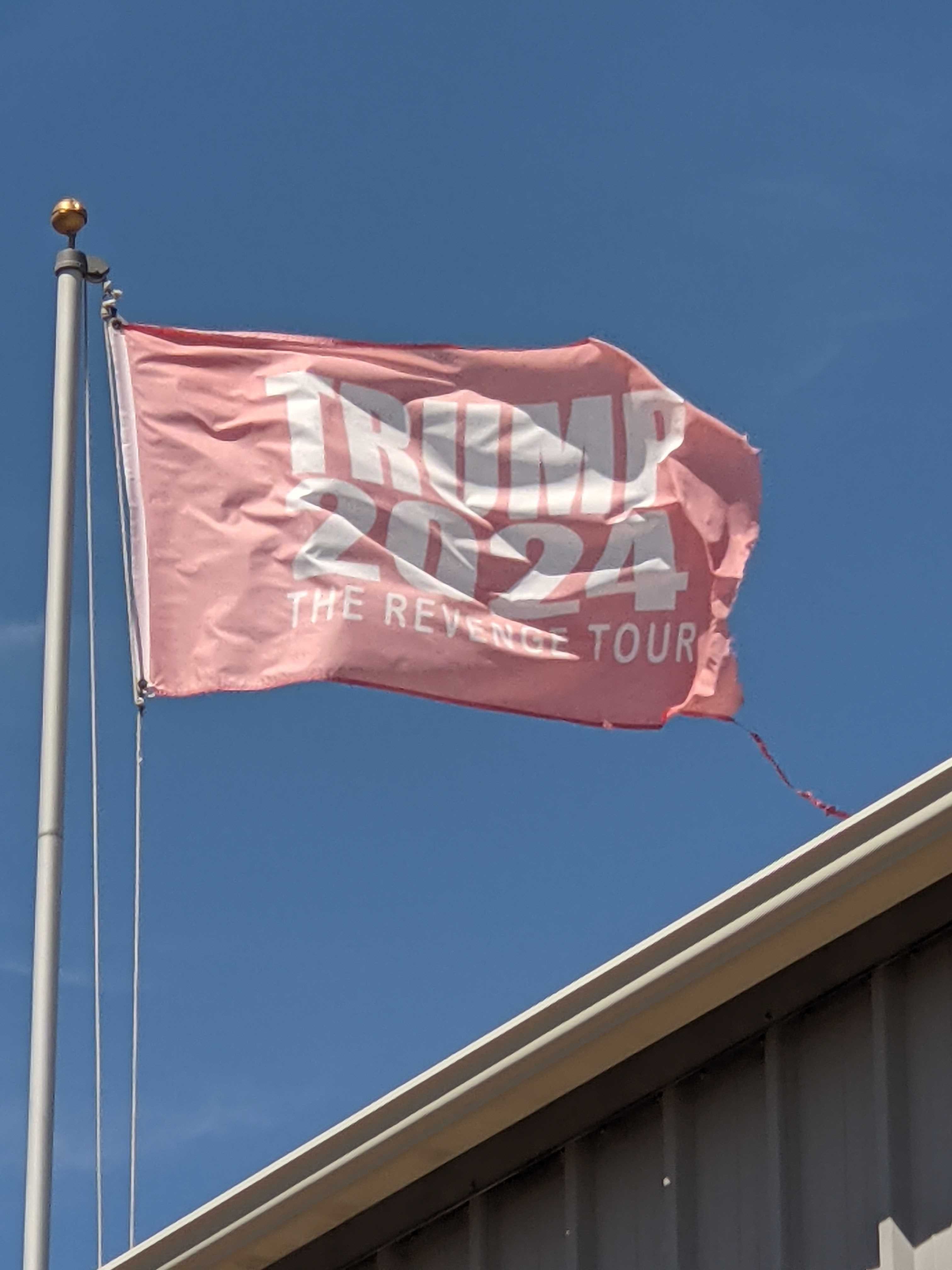 Once inside, we’re introduced to the Incredible Adventures instructors who will be leading us through the day’s activities. The four combat veterans are led by a guy named Tosh, who wears a brace with a hook on the end of it wrapped around his left wrist. The event organizer addresses the group by welcoming us to a day of sniper training, but Tosh corrects him. “Let’s call it a sniper adventure.” We break up into groups and spend most of the day learning how to breach a building, systematically move down a street while in hostile territory, and handle a weapon. We’re each given an M4 rifle converted to fire simunition, which has a similar impact to airsoft, and we practice firing them and running various military drills.

As we run drills, no one refers to the people we’re learning to kill as Muslim, Middle Eastern, or Arab. Any time the instructors refer to them, they say enemies, bad guys, or the other guys. Of course, it’s impossible to ignore the fact that “the bad guys” are most certainly Arabs here. At the end of the day, we run a combat scenario where we trade fire with role-players dressed in white robes and keffiyehs. The actors are all white, I think, and I can’t decide what’s worse: white people dressing up like Arabs to be shot at, or subjecting actual Arab people to this experience. 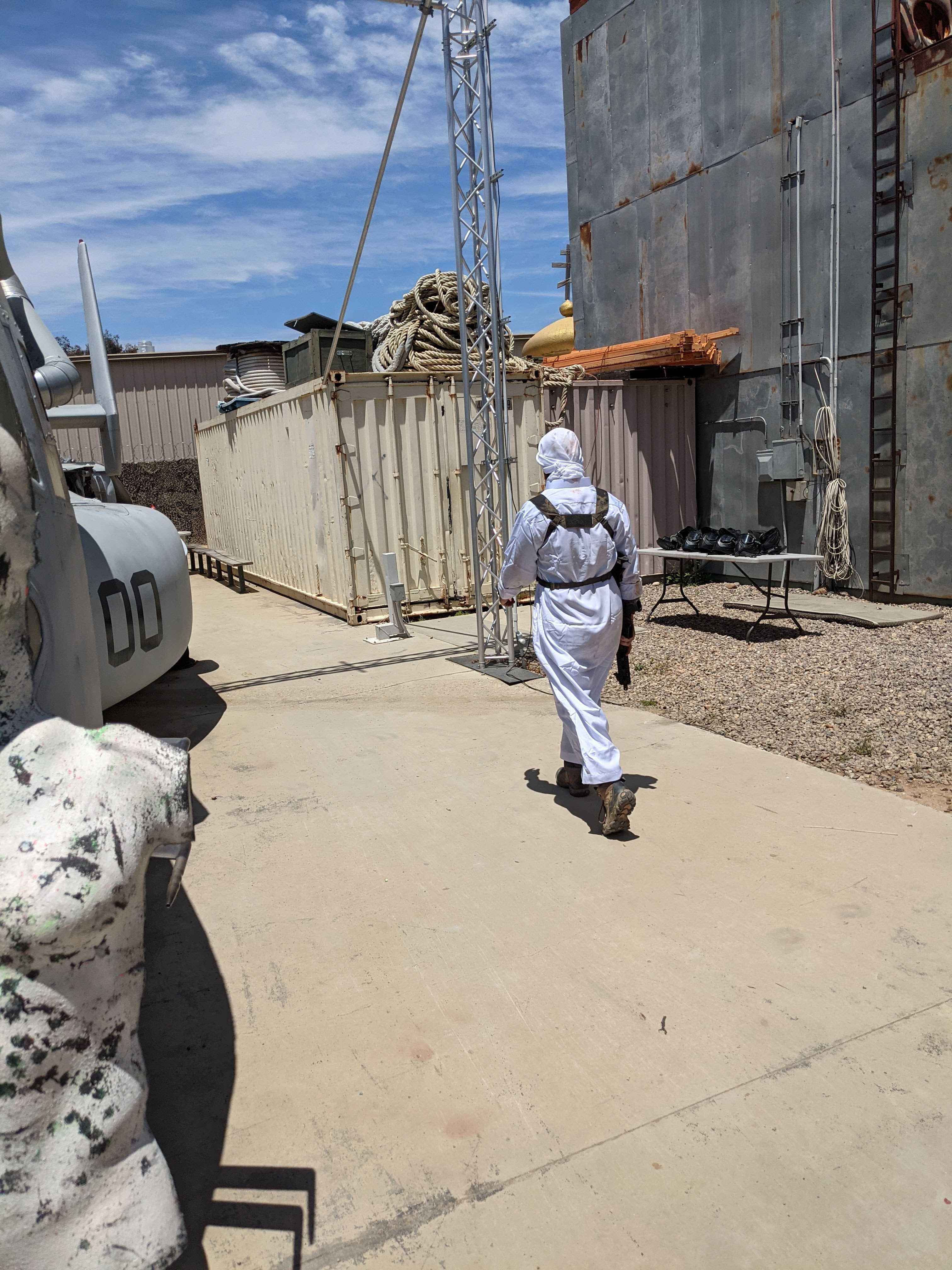 The other thing we don’t talk about is Sniper Ghost Warrior: Contracts 2. My understanding is that the Polish developers from CI Games had intended to be there, but pandemic issues and travel restrictions prevented them from coming. There’s a bank of PCs in the main building where people can play the game, but aside from lunch, there’s no scheduled time for heading inside. What’s more, the game came out the day before the event, which isn’t typical for press events like this. I had received my review code earlier in the week and was already playing it at home (check out my full review here) so I don’t spend any of my time at the Sniper Ghost Warrior: Contracts 2 event playing or talking about Sniper Ghost Warrior: Contracts 2, which seems a bit odd even before you get into everything else wrong with what’s going on here.

When the combat scenario starts, Tosh shows my team a map and explains the route we’re going to take through the facility. He points towards the role-players dressed like Arabs and says, “Those guys over there have killed a lot of good Americans.” I suspect he said something like this to every group as some sort of motivator. Anti-Arab attitudes are so deeply ingrained in American culture, and here we were, play-acting a violent scenario to avenge our fallen brothers. Almost all of the other attendees are having the time of their life.

We run all around the compound trading fire with the role-players and dodging explosions. After making our way to an apartment building, we climb to the third floor and trade our M4s for scoped rifles. From the window, we snipe the role-players down below like they’re targets in a human shooting gallery. This is the most dehumanizing part of the entire day. It also seems to be everyone else’s favorite, based on their reactions after the fact. 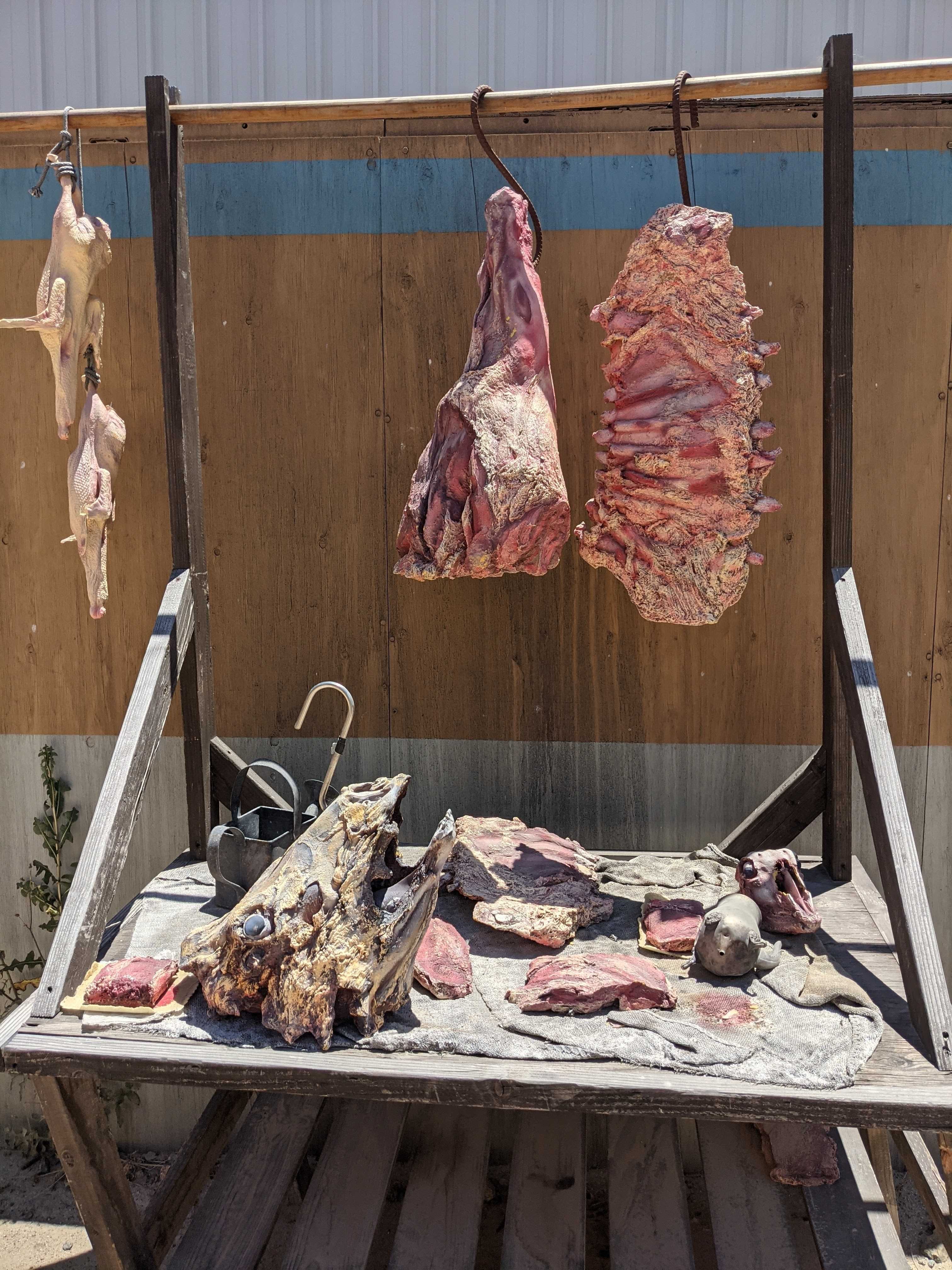 We get a gift bag at the end of the day filled with survival tools like a firestarter, a rope saw, a compass, a pen that can break glass, and a collapsible baton just in case we’d like to do some more violence later. When it’s all over, the event photographer asks us to take a group photo with the role-players. The participants are asked to stand in a row facing the role-players with their fists raised in anger, while the role-players are instructed to put their hands in the air and ululate like a jihadist. Another writer and I give each other a horrified look – I pretend to take a phone call and step away.