Nier: Automata’s Flooded City Washes Away All Other Level Design 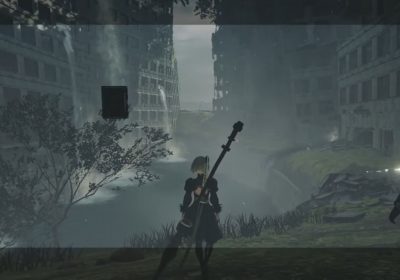 Water rushes through cracks long since battered into hulking heaps of concrete, roaring from the source before softly spilling into a calmer basin. There’s something quite ethereal about the scene – gross monuments to humanity and progress being reduced from metropolis to Atlantis before the plummet, ambiguous rubble like cheap decorations in a fish tank. This uncanny, Roadside Picnic-esque ensemble of alien esoterica allows the accompanying piano to double as a sombre haunt, sifting sweetly but sinisterly through the air like some sort of siren song to certain death. No matter how many thousands of hours I’ve played across hundreds of games, nothing has ever come close to eliciting the same wonder and dread as Nier: Automata’s sublime Flooded City.

It’s worth mentioning our first encounter with this particular locale in order to articulate the sheer gravitas it’s charged with. After City Ruins, the heart to Automata’s many meandering veins and arteries, changes in Chapter Five, a new set of caves that wrap around the back of the Resistance Camp opens up. Venturing down leads you to a set of sewers, which are mostly unimportant aside from their function in creating a kind of environmental paradox. Narrow, truncated, and long since desolate, these small and sordid structures feel grisly compared to the far greener City Ruins – this is intentional.

Although you can visit the Flooded City prior to being directed there as part of the story, it doesn’t quite carry the same weight until you make your way through the sewers and are slapped with one of the most nonchalantly brilliant cutscenes I’ve ever seen. There’s no dialogue, no lengthy melodrama… no anything, really. It’s just a few roaming shots of a new area played out in a ten-second reel, but the level of structural and thematic integrity on display is ridiculous. Those first few notes of City Ruins are the only thing vistas like these need to be catapulted straight into the upper echelon of level design because of how pure the mental image, sound, and overall premise of the area is – ask anyone who’s played Automata to imagine the Flooded City and I reckon they’ll be able to weave the full tapestry together in two seconds flat. 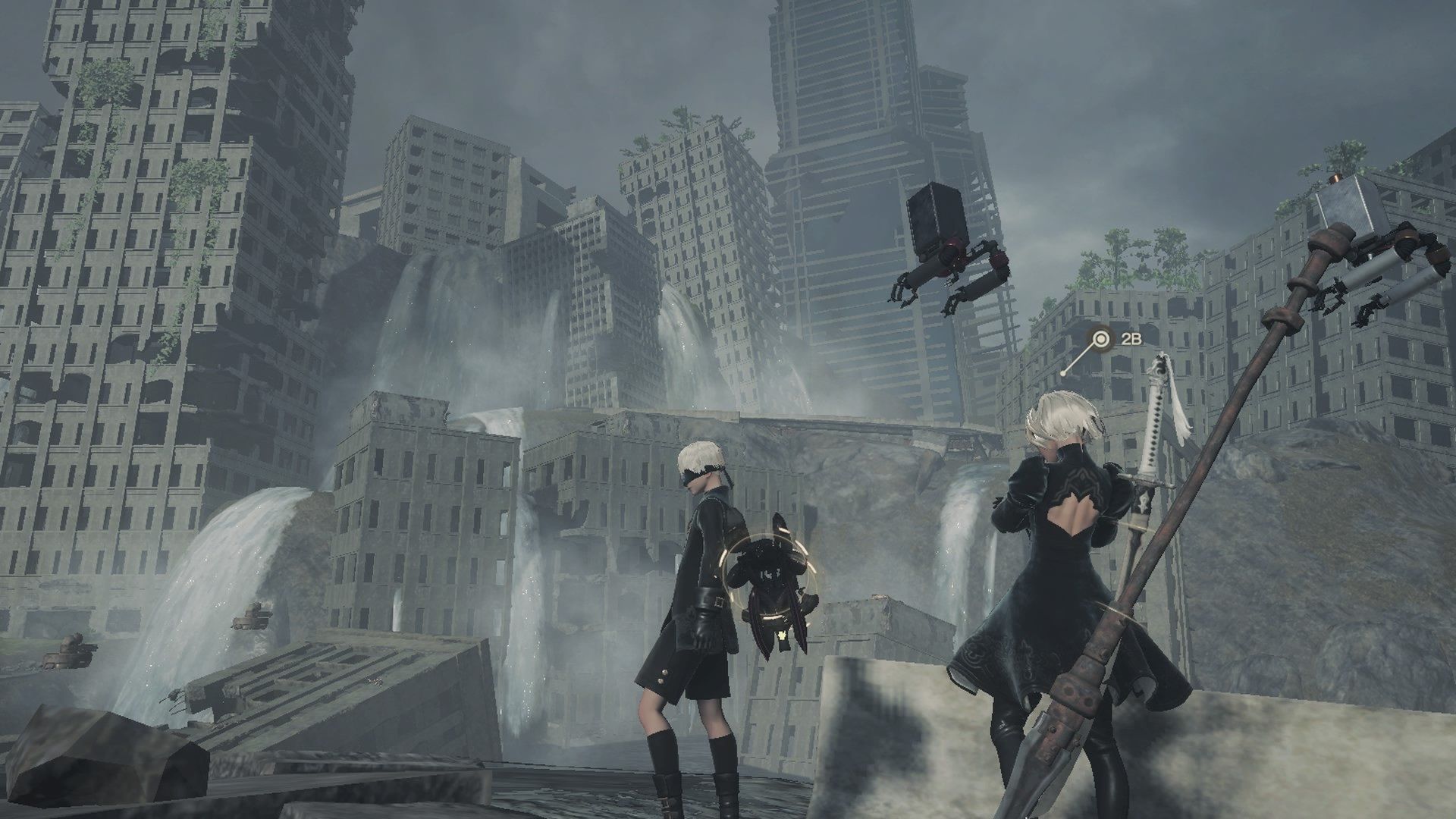 While my favourite part of this location is the front section, the grandiose skyline of decaying buildings looming large over the nature that conquered it, I think the whole area is equally important. As you venture further in, you’ll need to flit from falling bridges to sunken high rises, battling some particularly roguish machines who have somehow managed to wind up making their home here. Like the tunnels leading into the city, the submerged superstructures at the back of it inform what remains – it’s history in a series of stark images, the subconscious recognition of disparities in scale acting as a kind of instinctive guide to understanding the area. Even without reading into the Flooded City, or considering Grun, the 1,000-foot-tall robot who lies dormant here, you can assess the situation by atmosphere and aesthetic alone. The music might feel fairly reserved, if not consciously constrained, but it plays a huge part as well – Keichii Okabe’s ability to create expressive soundscapes is at least as important to level design in Automata as any kind of more visual art.

It’s obviously important to consider what we actually do in a level when we talk about level design. The environmental design is one thing, but what about traversal? Narrative? Combat? Enemy design? Hazard placement? The Flooded City is quite simplistic – some of the platforming is actually a pain in the arse – but I think it works best that way. There’s a decent boss fight here when you return later in the story, as well as some fascinating trivia to uncover in Part C. But aside from that, actually moving around the Flooded City is laborious and borderline unintuitive. I wouldn’t hold it against somebody if they saw this is a bad thing, although I’m of the inclination that it’s a real victory in level design, because the single best thing you can do in the Flooded City is stand still. 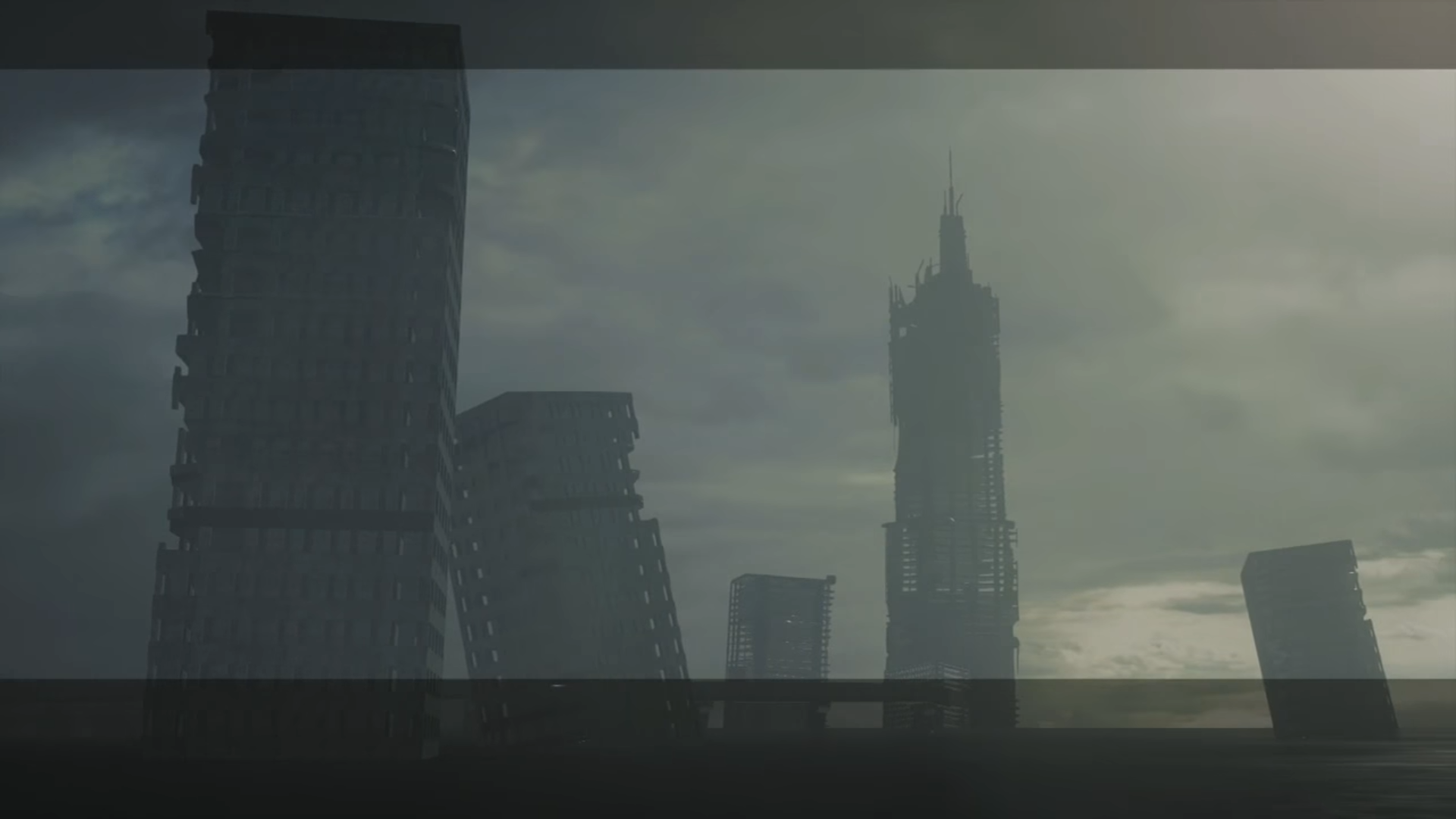 Nier: Automata is many things at once. It’s a third-person hack-and-slash with sections devoted to platforming, bullet hell, side-scrolling, hacking, boss rushing, and who knows how many other genre conventions I’m forgetting. It’s a game where you can die by pulling out your OS chip, where you can finish the game by eating a mackerel fillet or purchase the Platinum trophy using in-game currency. One of the few rare things that Automata is not, however, is needlessly loud. Yes, there are ostentatious – some might say pretentious, but I disagree – parts in the Amusement Park or Copied City. But despite its investment in androids and the apocalypse, Automata is weirdly concerned with beauty. It might seem like a bit of an odd comparison, but it reminds me of Wordsworth’s Two-Part Prelude, a text that brilliantly demonstrates the fact that “sublime” does not mean “gorgeous.” In Wordsworth’s poem, sublimity is used in the Romantic sense, where something as colossal and unconquerable as a mountain can be beautiful and terrifying at the same time. That is what sublimity truly is, and that is what is at the heart of experiencing Automata for the first time – a feeling of isolation and despair compounded with an irrational hope that comes from the beauty of destruction. The Flooded City would be far more harrowing if the buildings were intact – bearing a likeness to modernity minus the people that come with it would create a liminal space far more akin to Adam and Eve’s Copied City, which is made gross by its unreal perfection. On the contrary, it’s the fact that the Flooded City is broken that makes it far more agreeable – it’s lonely, sure, and defined by dereliction, but the water and greenery allow it to be gorgeous in accordance with the world it’s a part of.

Nier: Automata is teeming with amazing locations, from the Forest Kingdom to the Desert Ruins, to quirky little hamlets like Pascal’s Village. But the Flooded City washes the rest of the locations out to sea, standing stalwart as its absolute best level – if not the most successfully evocative level ever designed. 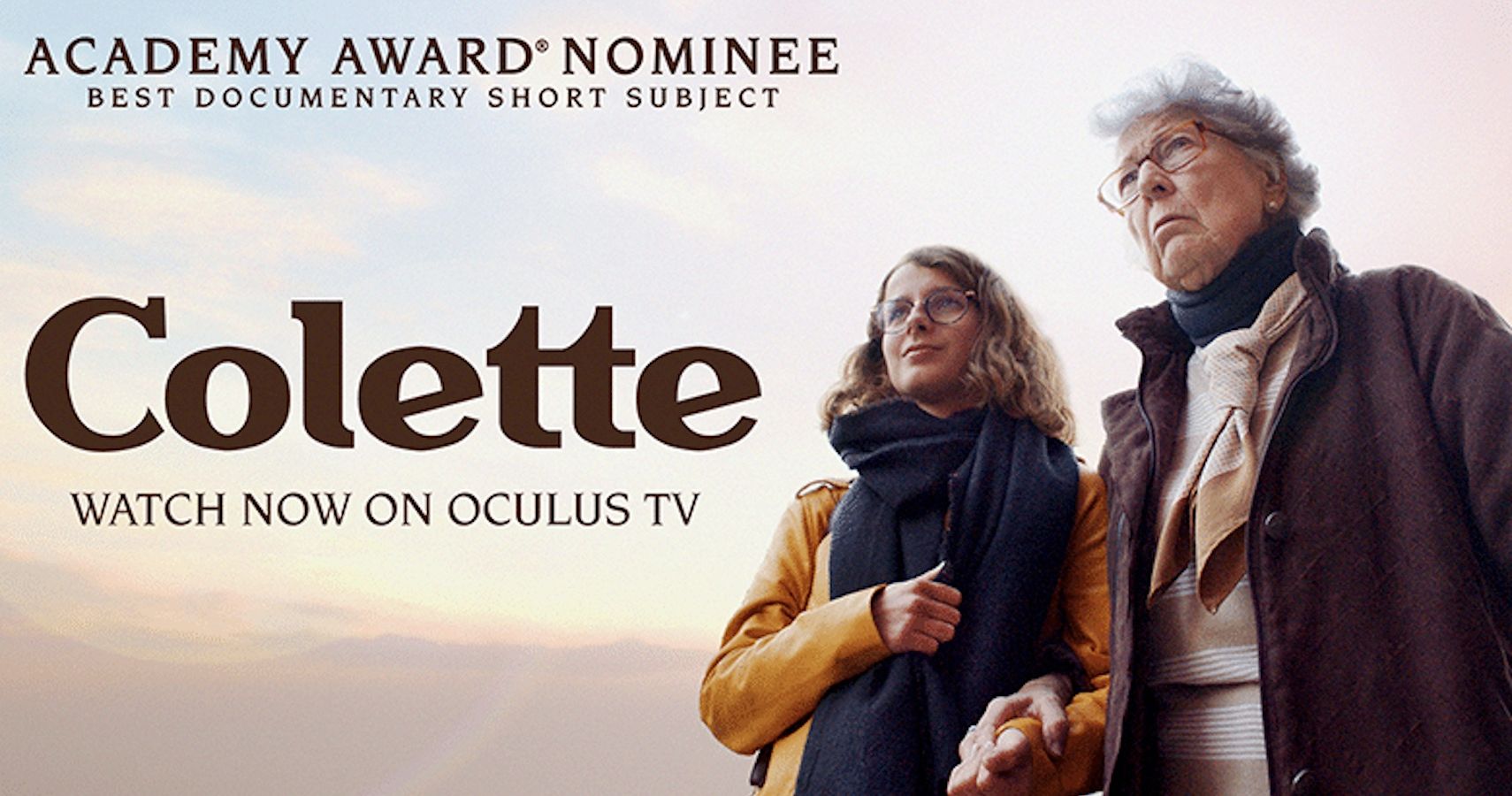