Before I dig into the Nintendo Switch Lite, Nintendo’s lovely portable-only revision of its original hybrid hardware, I’d like to answer the question that seems to follow this release like a buzzy little mosquito: Why does the Switch Lite even exist? The Switch is … the Switch! It can be used at home or on the go! Why take away key features when the universal strategy in the tech world is to add, add, add — usually while raising the price?

The answer gets to the surprising gutsiness of a seemingly simple hardware iteration. For the first time in nearly three decades, Nintendo seems to be consolidating its power around a centralized gaming ecosystem to fend off threats that threaten to undercut its two specialties: The competing consoles have become too powerful and complex, while portable gaming on smartphones has become too cheap and ubiquitous. So where do you go?

Rather than fight on two fronts, Nintendo is performing a balancing act that only it has the experience and guts to pull off. The company is using its console experience to make a portable more robust as a gaming device than any smartphone, and its portable talent to make a more flexible and mobile console.

Yes, the original Switch launched this plan a couple years ago. But the Switch Lite appears to solidify it. No longer is Nintendo in the discrete businesses of portables and consoles; it’s in the business of Switches. And business is booming. 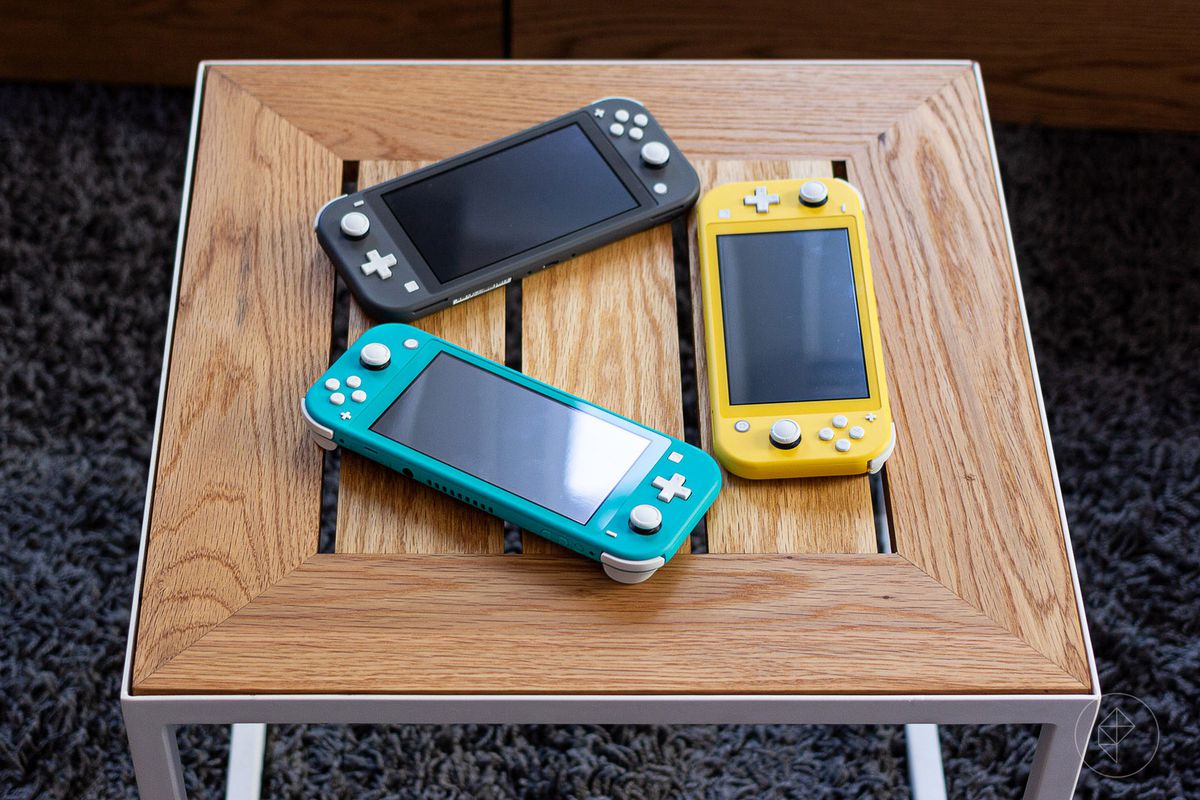 Why does anyone need a Switch Lite?

The original Switch was a fascinating idea, combining the flexibility of portables with the power of a traditional console. Its entire branding alludes to choice: Play on your living room TV, or “switch” it up and play on the go.

So why would Nintendo want to remove that choice, drop the price, and compete with its own existing line of hybrid hardware?

Because, as Apple famously proved, you can either cannibalize your own business and paradoxically grow it, or wait for someone else to take market share. Nintendo knows the value of a low-cost portable; one of the reasons the 3DS has held on for so long is that parents love buying less expensive systems for children to take with them when they travel, or just when they want to play something around the house. So how does Nintendo get rid of the 3DS while keeping that market?

With a $199.99 dedicated portable that plays Switch games. Which brings us back to the hardware itself. 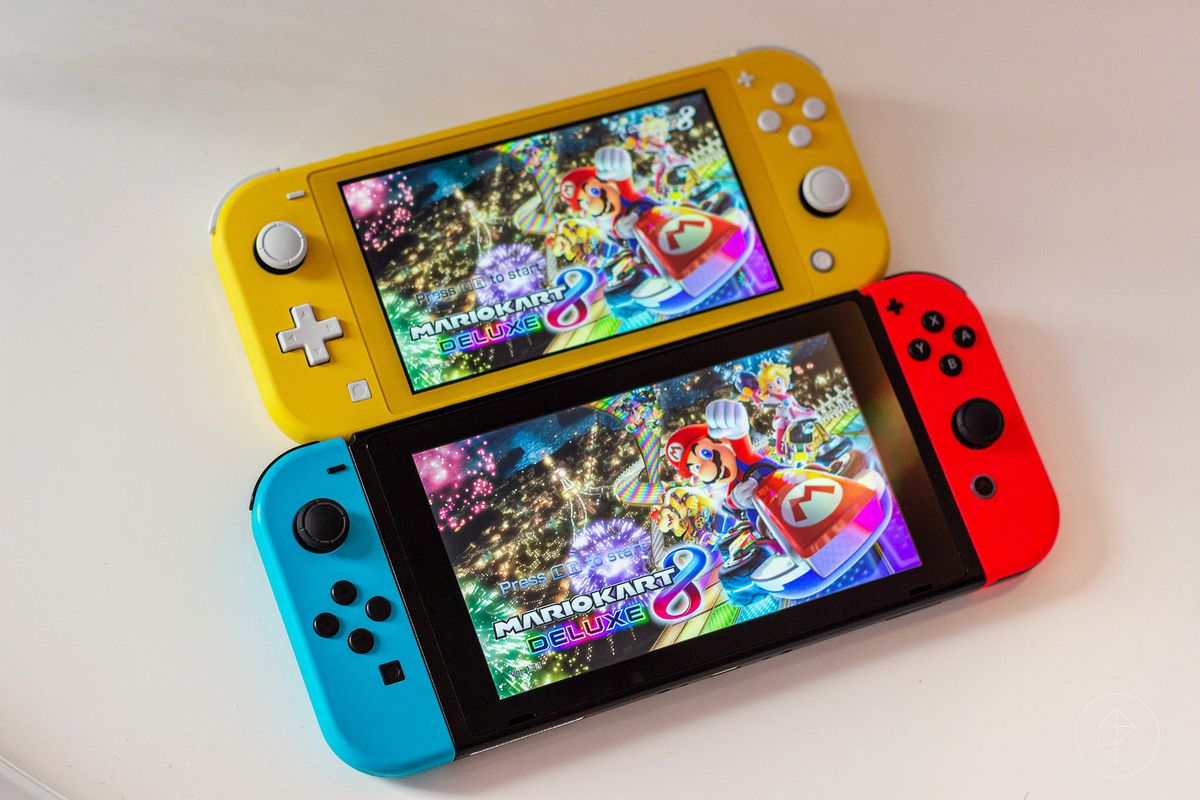 What’s different between the Switch Lite and Nintendo Switch?

The lack of a TV-out function is the key difference between the Switch Lite and the original hardware, but it’s just one of many tweaks that refocus this system as a pure portable.

The Switch Lite has no detachable Joy-Cons; the controls are part of the package, which is a single hunk of plastic. This decision remains concerning due to Nintendo’s long-standing issues with controller drift for the platform, considering the inability to replace the Switch Lite’s controls if something goes wrong. (We’ve only had two days with the Switch Lite — not enough time for long-term tests of the analog sticks’ functionality.)

HD Rumble and the motion camera have also been removed, which doesn’t seem like a significant loss considering that so few Switch games have made interesting use of those features. The system itself is slightly smaller than the original Switch, as is its display: a 5.5-inch 720p LCD screen instead of the hybrid device’s 6.2-inch screen. True to its name, the Switch Lite is also a bit lighter at around 0.61 pounds versus 0.88 pounds (that’s with the Joy-Cons attached). 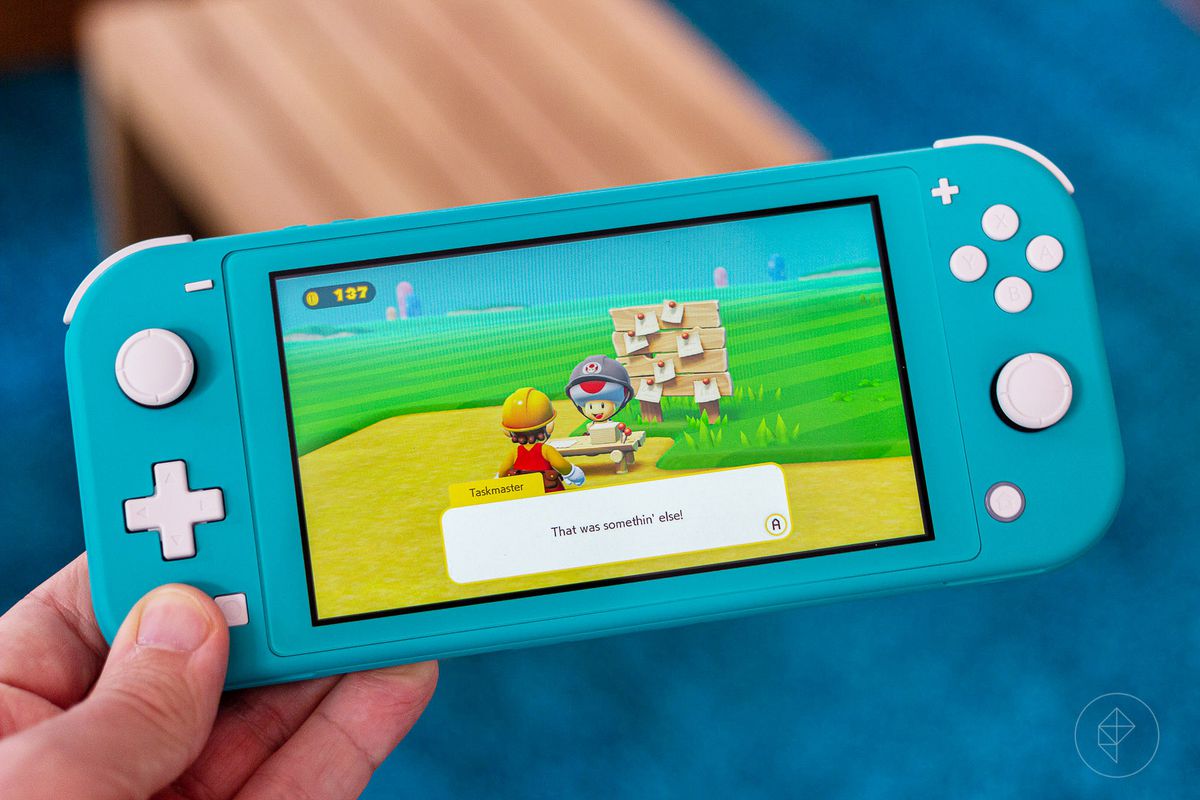 The Lite’s exterior is made of a matte plastic (launching in yellow, gray, and turquoise) that sits well in the hands without being too slippery. It feels like a plastic toy, not a piece of technology, and I say that as a positive.

My fears from the Lite’s announcement of cramped hands now seem premature, though those with larger hands will still want to try one before buying. If you thought the Switch was uncomfortable as a portable device, the smaller Switch Lite may cause more problems for you.

You have some recourse, as the Switch Lite can still pair with Switch Pro Controllers and Joy-Cons if you want to save your hands. However, finding a way to hold the screen upright for detached play may be a challenge, since there’s no kickstand on the back of the system.

Likely the most appealing upgrade for commuters is the improved battery life, from the estimated 2.5 to 6.5 hours of play time provided by the Switch to an estimated three to seven hours with the Switch Lite. It’s a minor change, but any increase to battery life is welcome. 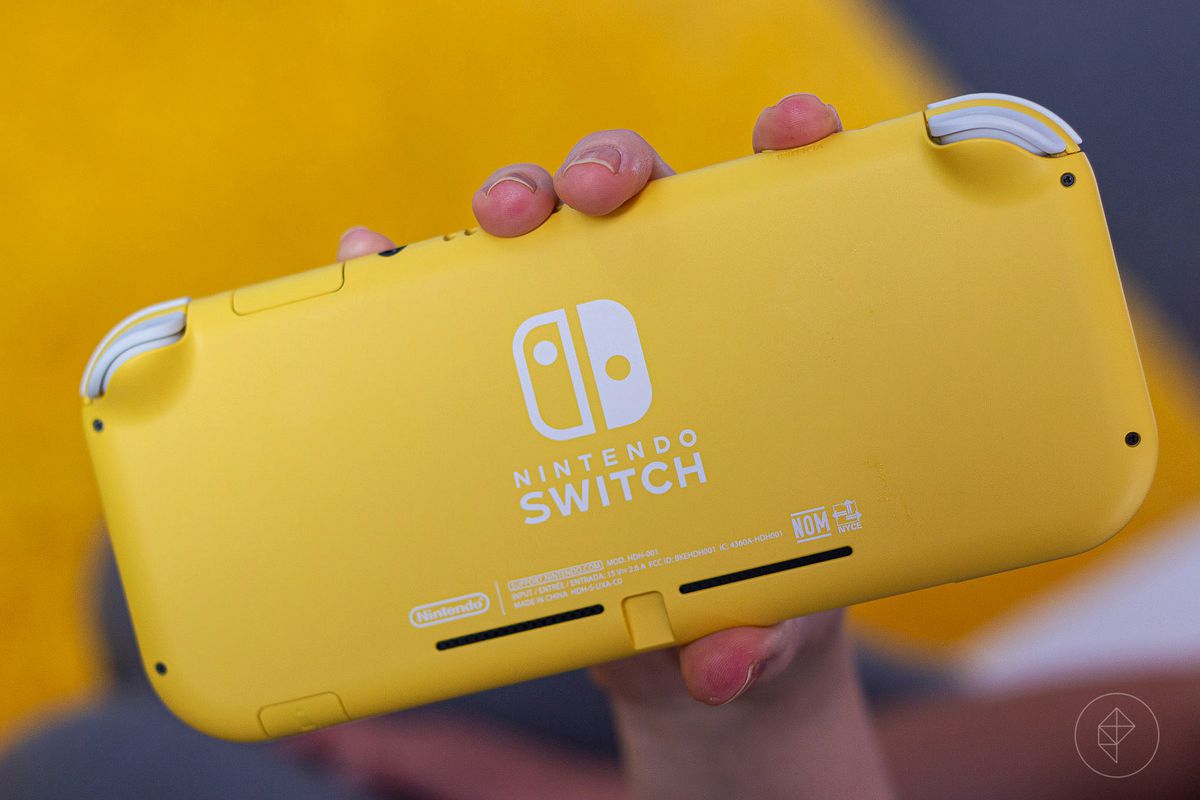 The back of the Switch Lite is clean and attractive, but why no kickstand?
Photo: Michael McWhertor/Polygon

So how well does the Nintendo Lite work as a portable?

Very well, thanks for asking.

The cross-shaped D-pad is a nice improvement over the four discrete buttons on the standard left Joy-Con, and as I said before, the brightly colored, smooth matte plastic is tactile and pleasant to hold. I never felt like I was going to drop it, or like it might be easy to break. I’ve enjoyed the more solid, completely stiff feel of the Lite versus the original. It’s bizarre how little I noticed that small amount of wiggle that comes with the original Switch until it was gone, and I have to admit that I don’t miss it at all.

The buttons themselves feel slightly different, and some Polygon staffers have complained that they’re a little too “squishy,” but they were firm enough for me that I wasn’t bothered. If you’re curious, go test one out at the store for yourself to see how it feels.

The smaller size allows the console to fit more easily in my pockets. With the controls built into the unit, I was never scared of an analog stick catching on my pocket or bag, wiggling a Joy-Con out of position. The single USB-C port at the bottom is now used only for charging. The microSD card slot remains, and can be used to improve on the hardware’s standard 32 GB of internal storage, some of which is already taken up by the system’s software.

There’s the slot for the game card up top, a rocker for volume, an indented power button and, blessedly, a headphone jack. I don’t know when Nintendo is going to take a page from the smartphone industry and ditch the headphone jack, but I sincerely hope the answer is “never.” At the same time, the Switch’s lack of Bluetooth support for wireless headphones is still annoying.

One other concern: Many Switch games are still designed with a TV or PC in mind, and the smaller screen may make it even harder to read text if you struggle to do so on the original Switch when played in portable mode. The upside to this change is that a smaller screen with the same resolution means higher pixel density, which results in a sharper picture. Again, it’s not a massive change, but it’s positive and noticeable.

Again, I’ll hammer home the point that you may want to test before purchasing a Switch Lite. So much of what it does well, or fumbles, is based on your own tolerances for the smaller controls and screen.

Overall, the Switch Lite is an absolutely killer portable machine that’s a joy to use, despite a few misgivings about what was taken away compared to what was added. If you want a portable Nintendo system, and you don’t mind spending a little bit more to future-proof your gaming options, the Switch Lite is excellent. 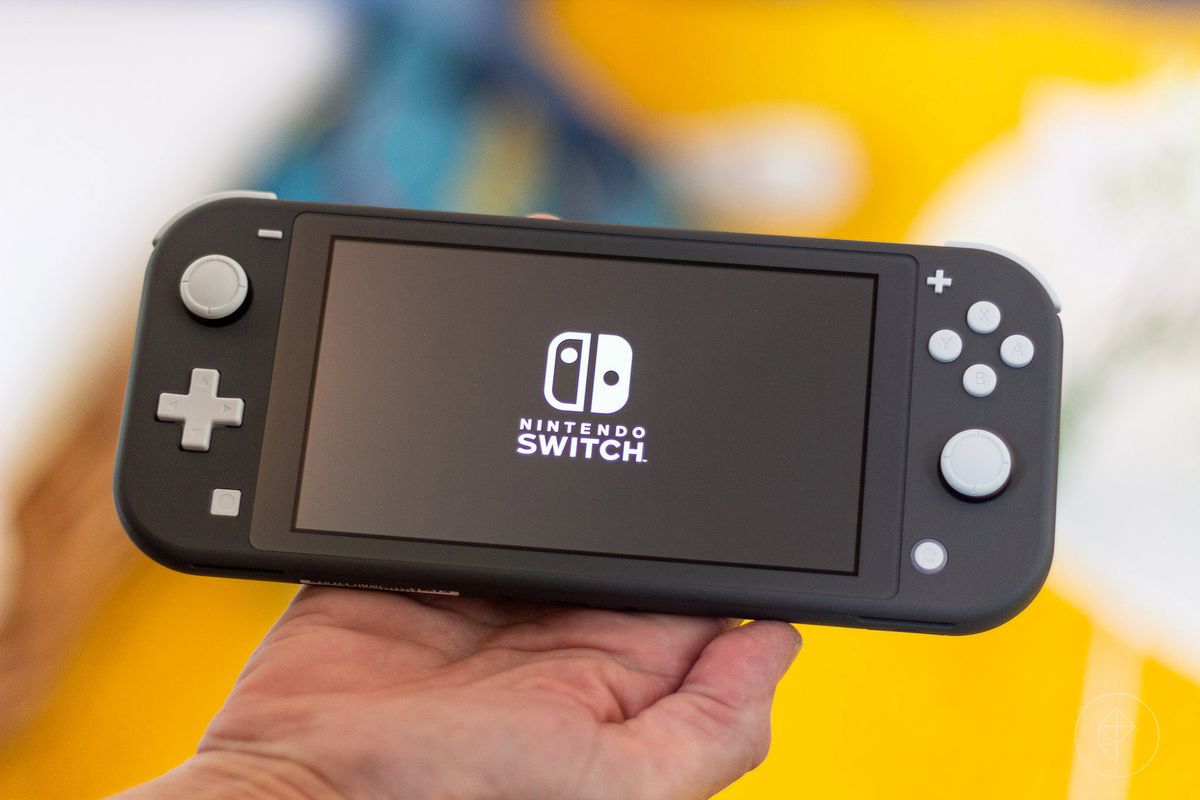 What does Nintendo still need to do to improve the Switch Lite?

The Switch Lite makes a very attractive second Switch console for the family, especially for larger families with a lot of kids, or even just two adults who like to play different games or who travel frequently.

I was surprised at how much it felt like the Switch Lite wasn’t replacing my original Switch, but instead operating as a solid alternative. The Lite could be many people’s second Switch, not their first. That would be great news for Nintendo.

But Nintendo hasn’t optimized its hardware and software for this scenario. The lack of any kind of family sharing for games, or even just a robust digital rights system is a huge roadblock. You can use the same digital game on multiple Switch units, but any Switch that isn’t the user’s primary system has to connect to the internet to give you permission to play games, which isn’t always an option for a portable device on the road or in the air.

The only other option is to buy physical copies of your games, which means that if one member of the family leaves the house with the cartridge, no one else can play.

If Nintendo wants to launch an ecosystem of hardware to entice families to buy multiple Switch units — which would be ideal — it needs to figure out better ways for those consoles to communicate and share content.

Other platform holders have figured out ways around this limitation, even though the issue isn’t nearly as pressing on hardware that stays in one place, which makes Nintendo’s inability to deal with the situation even more baffling. The company always has a way of making problems that have been solved on other platforms seem insurmountable, and the trend continues with the lack of any kind of family sharing plan for games on the Switch and Switch Lite. 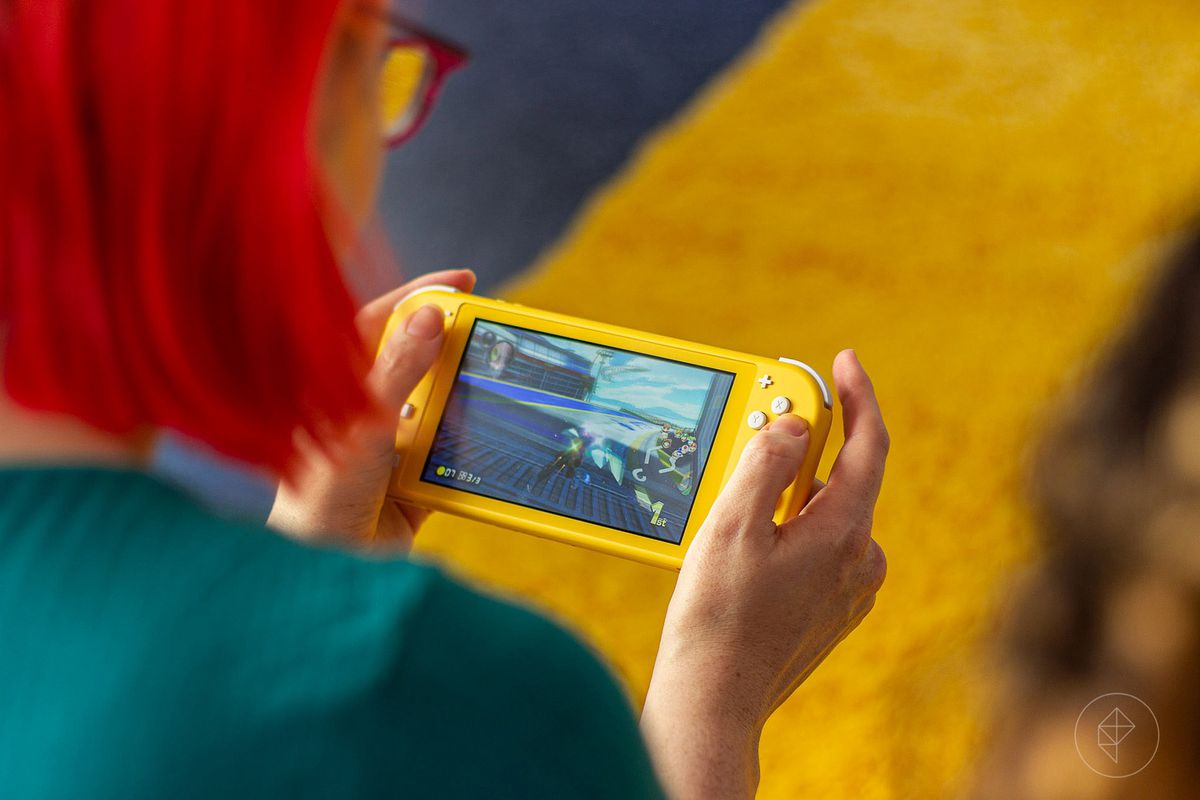 So should I buy a Nintendo Switch Lite?

Nintendo has built a playful, affordable system that is a lot of fun to use and fills a specific niche in your gaming life, while leaving out a few basic features that should have been a no-brainer. No one does it better, and many have done it a lot worse.

The Switch Lite gives Nintendo a dedicated portable on top of its hybrid portable/console without requiring another line of games to be developed or purchased. It has never been easier, or less expensive, to keep up with everything the company is doing. This is a great direction for Nintendo’s product line, and the company will likely sell an untold number of units this holiday season.

Nintendo has been on top of the dedicated portable market since the launch of the original Game Boy, but now it competes with iOS or Android devices and their powerful parent companies. It’s amazing how well Nintendo has kept the market going despite the fact that all of us already have a portable gaming device in exactly those same phones.

Do we need to buy another piece of technology to play games on the go? Of course not. Will people do it anyway due to the quality of the Switch Lite? Absolutely.

The Nintendo Switch Lite will be released on Sept. 20. The system was reviewed using a retail unit provided by Nintendo. You can find additional information about Polygon’s ethics policy here.