Home » Reviews » Oath: Chronicles of Empire and Exile is much more than just a gussied-up version of Risk

Oath: Chronicles of Empire and Exile is much more than just a gussied-up version of Risk 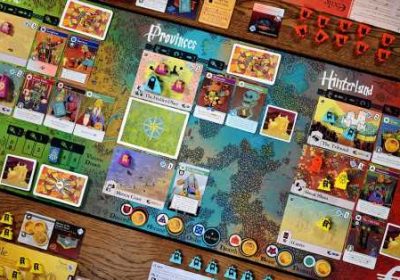 Ouija boards are fun to play with because they encourage a shared delusion. If I’m not moving the planchette, and you’re not moving it either, then it must be a spirit trying to speak to us. There’s a similar sort of delusion going on in Oath: Chronicles of Empire and Exile, the latest from Leder Games. Everyone sitting there at the table is confident that they’re playing a traditional strategy game, a gussied-up version of Risk or Axis & Allies. But just like that hokey old spirit board, Oath is merely the facilitator for something much more grand.

Oath isn’t really a strategy game at all. It’s a complex, almost convoluted engine for generating stories. Played regularly with the same group of people, it becomes more than simply a contest of wills. It’s an elaborate role-playing game wearing the clothes of a complex strategy title. And that’s just part of what makes it one of the year’s best tabletop experiences.

At the end of every game of Oath, the winner makes one of four different pledges. Then, at the beginning of the next game, they become the ruling Chancellor and, most likely, the Oathkeeper as well. That vow completely changes the win conditions for the following game.

The Oathkeeper of Supremacy, for instance, wins by force of arms and strength of influence. Games played against this oath can feel at times an awful lot like a traditional area control game. The Oathkeeper of Protection, however, wins by gathering up and holding onto the most loot. Games played against this oath can feel more like an adventure game, the heroes roaming the land one step ahead of a powerful despot.

The Oathkeeper of Devotion trades in information, and must hold the Darkest Secret. It’s an abstract concept that represents the most powerful piece of knowledge in your world. Played in this way, Oath becomes a game of courtly intrigue and deception. Finally, the Oathkeeper of the People must always be a shepherd to the game’s nonplayer characters (NPCs). Unseating the Chancellor holding this oath feels like leading a revolution.

At the same time that these vows are being made and tested, other players have an entirely different way to win. Vision cards represent potential game states — challenging ways to shoot the moon, in a way — that can allow even the least powerful players to snatch at victory. They’re no more difficult to pull off than the sweeping, multiround campaigns required to hold or break the oaths described above, but they require stealth, timing, and sometimes an almost preternatural understanding of the hidden information scattered all around the table.

Art for some Denizens from Oath, shared on Twitter.
Image: Kyle Ferrin/Leder Games

The real magic of Oath, though — and what separates it from other high-concept strategy games — is its NPCs. These Denizen cards inhabit the World Deck, which is also home to the game’s Visions. Each and every one of these NPCs is unique, both in their art and in their powers. Some can be played to your sideboard, where they serve as advisers. Some must be played to the map, where they take up residence in a particular region. But they all have their own personalities, and each of them is sorted into a thematic suit.

Cards with the Hearth suit represent the forces of love, community, and kindness, while the Beast suit is filled with powerful animal creatures. Order features military units and just a hint of totalitarianism, while Discord is filled with strange new quirks and restrictions. The Nomad suit is similarly disruptive, and features new characters from outside the game — an evil twin, a magical horse, rival warlords, and more. Finally, the Arcane suit represents magic and wonder in your world.

It’s through the interplay of all these NPCs and each of the players’ unique objectives that a story begins to unfold. Once the rules themselves are internalized by the players, elaborate storylines begin to emerge organically, rising off the table like a mist.

I’ll never forget when, in our second game together, a friend drafted a massive army with the help of a powerful werewolf and its adorable animal playmates. In that same game, a wizard school displaced a group of rangers, transforming a powerful offensive region used for mustering soldiers into a secretive enclave that traded in mysteries. It’s as though the NPCs themselves have a part in determining the direction of the story. The game mechanics actually reinforce that through a clever system of influence that shifts power to and from the game board itself. The bright and evocative art by Kyle Ferrin, who also helped create the world of Root: A Game of Woodland Might and Right, elevates the entire experience.

At the same time, the ground that players are standing on — the materials of the game world itself — are constantly changing and shifting. For instance, there are three regions in Oath named Cradle, Provinces, and Hinterland. Using the large, placardlike cards that come in the box, players will shuffle and reshuffle the contents of these regions from game to game. The result is a world that feels amorphous, almost dreamlike.

What’s interesting is that the cost to move through these three regions will always be the same. Whatever kind of land is there, the movement between the areas in Cradle will always be cheap, and movement in the Hinterland will be expensive. So too is moving back and forth between these regions. In this way, the geographic center of power shifts from game to game, even as the political power is shifting as well.

As this roil of regions, NPCs, and conflicting player objectives shifts and mutates on the table, so too does its cast of characters. The winner can literally remove their choice of Denizens from the game, permanently pushing the world toward Order, Discord, and the other suits of cards. At the same time, players themselves develop a rich shared history. One betrayal begets another, causing deep-seated rivalries and distrust. Meanwhile, idle peace treaties and casual alliances can grow and harden into bonds that can last for in-game generations. As designer Cole Wehrle told Polygon in an interview earlier this year, who wins each game isn’t nearly as important as how they win.

I’d be remiss if I didn’t talk about Oath’s production values. I’ve already mentioned Ferrin’s art, but the materials used to make this game are top notch. It begins with the game board itself, which is actually much thicker and more well made than some luxury mouse pads I’ve owned over the years. The pack-in is also perfect, providing both a place to store tokens used during the game and a way to save your game world securely after you’re done playing. It all contributes to helping get the game to and from the table as quickly as possible.

The only limiting factor for this game, in my opinion, is the manual. It is painfully dry, and reads more like a preflight checklist for an exotic jet airplane than a traditional consumer-grade game. Fans of crunchy strategy games from the likes of GMT and Phalanx shouldn’t be intimidated in the slightest, but just about everyone else will need to put in some amount of study before, during, and well after their first game. The included Oath Playbook features a full, annotated walkthrough of your first round of play, but even that feels incomplete for new players. Your best bet is, for better or for worse, the sea of fan-made tutorials found on YouTube.

Despite those limitations, I’m still completely in love with Oath: Chronicles of Empire and Exile. Its complexity and its narrative strength create a virtuous cycle, making the game more and more interesting each time you revisit it. I think it represents the pinnacle of modern board game design, earning it a place in Polygon’s collection for years to come.

Oath: Chronicles of Empire and Exile was reviewed with a physical copy provided by Leder Games. Vox Media has affiliate partnerships. These do not influence editorial content, though Vox Media may earn commissions for products purchased via affiliate links. You can find additional information about Polygon’s ethics policy here.

Oath: Chronicles of Empire and Exile

• Similar games: Root: A Game of Woodland Might and Right