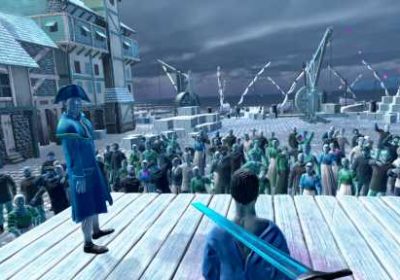 Ever wanted to know what beheading was like in 16th Century Germany? Probably not I’d reckon but that doesn’t mean to say the topic is too unusual to explore in virtual reality (VR). And that’s exactly what indie developer Samuel Gordon has done, creating Sentenced VR, an experience that sees you take up the role of executioner, instructed to part head from body of those unfortunate souls who’ve fallen foul of the law.

During a period in history where life wasn’t all that long for many and violence was rife, lords of the lands aimed to keep the peace by putting on public executions, beheading criminals for their crimes against society. And it’s your job to carry out the punishment, instructed to perform the job you were hired for, no questions asked.

Which seems like a very brutal and grim kind of videogame. However, Sentenced VR shouldn’t be viewed as a game because it doesn’t seek to entertain, more as a historical, interactive experience. Because, as it sheds light on this era of history Sentenced VR also challenges our own ideas of violence, obligation and personal conscience through a modern lens.

So Sentenced VR is a sort of beheading simulator with morals where you hear each individual’s crimes read out and then given their chance to say a few words in front of a baying crowd. Then you lop their head off with one quick swing of your rather large, cumbersome sword – you wouldn’t want to take several attempts, would you? Initially, the scoundrels are thief’s and murderers who mock the proceedings and even crack a joke before meeting their end. But as the experience progresses it begins to sow doubt as to whether some of these people really are guilty.

After you’ve completed your task the clerk will then pay you, altering the amount depending on how clean the kill was. Because you can completely botch the execution, taking too many swings or killing them too early. The final stage in each offers both time to reflect and a macabre reminder of what you’re doing. The head of each of those sentenced hover grimly to one side whilst on a table lays your bloodied sword and a book. The latter provides some light reading material detailing the role of executioner and history’s misconceptions, all whilst you clean your sword. Then you head to the sharpening stone to ready your blade for the next day; nobody likes to be killed with a blunt blade, do they?

Unlike a lot of modern videogames which relish in gore and bloodshed, Sentenced VR avoids glorifying this barbaric act through its highly stylised visuals depicting actual historical law and punishment. However, even though the experience is about an hour-long it manages to immerse you in this fictional world and really make you consider the finality of this method of punishment. So you do have the option to refuse and lay down your sword – or even attack the guards – each decision taking you to one of four possible conclusions.

As a VR title, Sentenced VR is very repetitive but it is meant to be. The controls can be a bit janky at points though, and so can the physics, swinging the sword doesn’t feel as natural as it should and the coins seem to fall into the ether. You’ve got teleportation and smooth locomotion available yet it’s the former that provides the smoother experience overall.

Seeing that Sentenced VR is a solo VR project by Gordon he manages to execute a thought-provoking experience even if it’s a little rough in places. While many gamers will likely find the slow, repetitive nature boring, if you have a keen interest in history then Sentenced VR provides some fascinating moments. Titles such as this are both gruesome as well as educational, showcasing VR’s unique teaching properties which could eventually see wider use in the future.