Home » Reviews » Seraphine: This Is The Third Time League Of Legends Has Gotten Into Trouble For Basing Skins Off Real People

Seraphine: This Is The Third Time League Of Legends Has Gotten Into Trouble For Basing Skins Off Real People

Whether you want to accept it or not, videogames are an artistic medium. The debate over that will rage on for eons, but as with other forms of art, someone’s personal experiences are inevitably going to flow into game and art design on a subconscious basis. An artist or designer might meet someone that leaves an indelible impact on their lives and years later, they’ll create a character based around that without even thinking.

Having that in mind, the recent news of one woman claiming that Riot Games copied her likeness for a character in League of Legends makes some sense. Riot may deny the claim, but the woman’s account of meeting someone from the company and sharing photos and samples of her writing does start to add up. Maybe Riot didn’t intentionally model Seraphine after her, but somewhere along the line, it seems as though her presence contributed to the design of Seraphine.

Then again, this isn’t the first time Riot has been accused of copying a person’s likeness. Heck, it’s not even the second. Over the last three years, Riot has made headlines for copying the likeness and characteristics of people for characters in League of Legends. The company even lost a court case filed by Dutch football player Edger Davis. 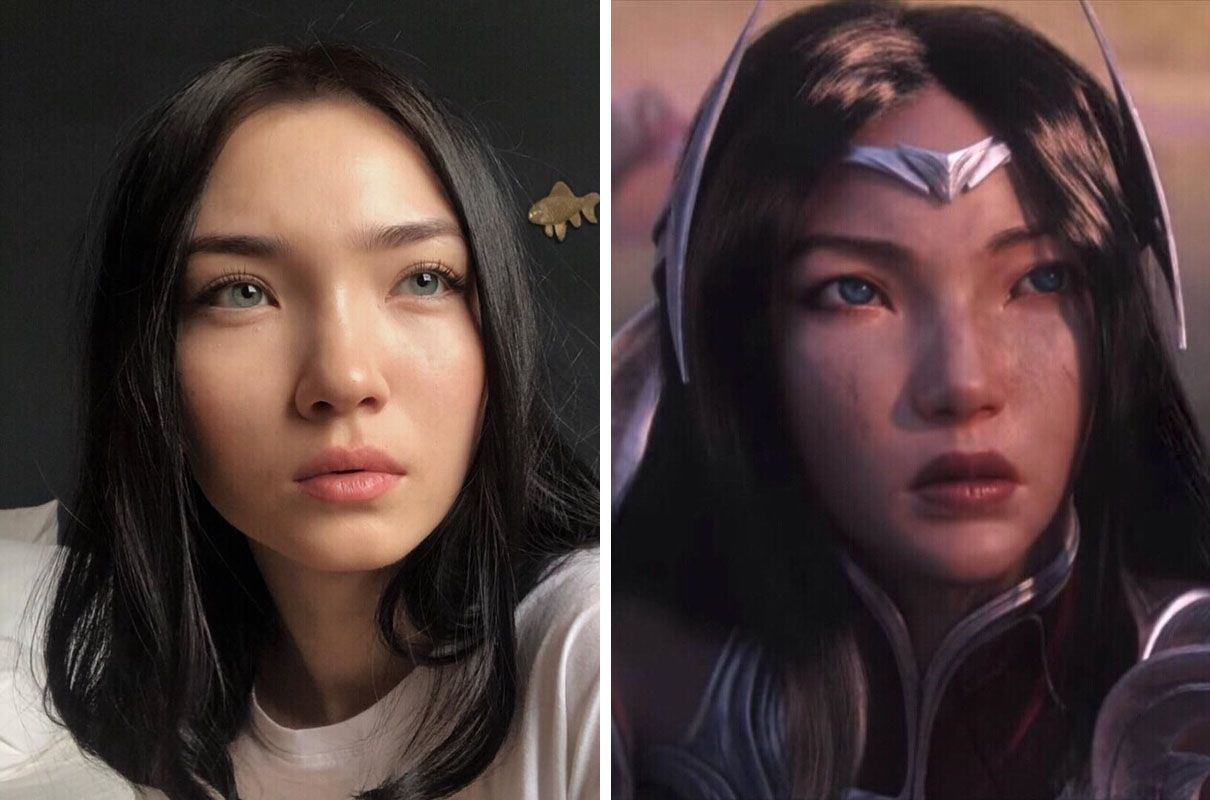 In the first instance of stolen likeness, Edger Davis alleged in 2017 that his identity was lifted for the character of Striker Lucian. In a side-by-side comparison of the two, a lot of Davis’ claims become almost too coincidental. Lucian has the same haircut, wears similar shades, is also a football player, and is dark-skinned. He’s practically a carbon copy of Davis, something that Dutch judges agreed with. He successfully sued Riot for an undisclosed amount.

Move forward a few years to 2019 and another uncanny resemblance cropped up in League of Legends. Kazakhstani model Aya Shalkar noticed a resemblance between herself and character Irelia. One of Shalkar’s defining traits is her blue eyes, which is something of a rarity in Kazakhstan. Low and behold, Irelia not only has blue eyes, but the same skin tone, hairstyle, and face shape.

“I understand the concept of ‘inspiration.’ I do, however, feel the need to defend my identity in certain cases, especially when it has happened without my consent,” Shalkar wrote on her Instagram account. About the only difference here is that Shalkar never interacted with developer Riot. In the case of Davis, Riot had previously tweeted Davis was a direct inspiration for Lucian, which shot holes in its legal case.

That all brings us back to Seraphine and her uncanny resemblance to an actual person. In an official statement from Riot, the company says, “Seraphine was independently created by Riot Games and was not based on any individual.” That goes against what senior designer Jeevun Sidhu Tweeted, saying Seraphine was partially based on his partner who also works at Riot. Both statements can’t be true at the same time.

Whatever the truth actually is, the fact that Riot’s past shows it isn’t above lifting a person’s identity for its characters paints the Seraphine situation in a pretty sinister light. We may never learn the entire story here, but we can only hope that Riot makes things right to those affected.