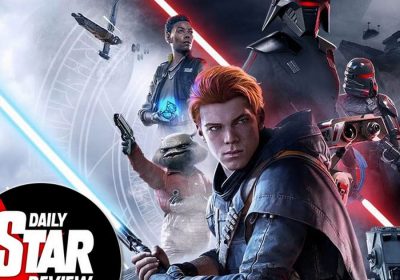 It's been over nine years since we last got a third-person Star Wars action-adventure game.

For the last decade or so, it's all been mobile games, DICE’s Battlefront series, and mediocrity. Sure, I love the LEGO Star Wars games but in over nine years, we’ve only had two of them.

Star Wars Jedi: Fallen Order's main appeal is that it’s a single-player experience with no microtransactions. It's a fully-fledged canonical story with meaningful and tactical lightsaber combat. The proper Star Wars fantasy.

And, damn, if Fallen Order isn’t a treat. If there’s one thing you should know about this game before you play it, it’s that Fallen Order is not what you might expect. The game’s combat is its main feature, with Souls-like dodging, blocking and parrying.

As a result, it can seem quite difficult at first – especially when it comes to crowd control. But as you mow down more enemies and fight bigger foes, you grow stronger both as a player and as a character.

This feeling is nothing new for Souls-like games, but it’s a first for Star Wars. It makes me wonder how this game didn't get released sooner – I actually feel like my lightsaber is something to take care of.

I want to use it as a tool rather than it being just a badass laser sword. Part of the attraction to the lightsaber is the fact that its only weakness is itself – in the films, only another lightsaber could counter it.

And that same ideology applies in Fallen Order. The variety of enemies (such as insects, stormtroopers, blood sisters and even security droids) make it more of an all-in-one defensive weapon, rather than just a simple sword.

Playing a Star Wars game where you actually have the ability to use your saber to its full potential is inspiring. Assuming you know when to block and parry, Fallen Order makes you feel like a real Jedi.

Enemies like to jump out from their often well-hidden spawns and interrupt an already difficult battle by adding huge crowds for you to deal with.

General movement and looking around with your camera has a small input delay, which can be frustrating. I’d move to the left and my character would move a bit later than when I pushed the thumbstick. Even switching to a different controller doesn't remedy this issue – it's a game-side issue.

To make matters worse, the game’s camera isn’t exactly the most fluid. It sometimes will glitch when jumping off of ledges or pipes and doesn’t feel that intuitive. It’s a real shame, especially in a game so focused on parkour and player movement. The parkour itself is… well, it’s fine.

There’s nothing special about it, but it’s a very cool and satisfying way to navigate planets when playing through Fallen Order.

Fallen Order makes you want to actively go exploring. Right from the get-go, you want to sink your teeth into the various environments available to you.

Once you’ve got the basic abilities from doing the first story missions, you can explore wherever you want, using abilities to complete puzzles and unlock further sections of each planet.

You're going to wish there was a fast-travel option, though – navigating through them can be a huge hassle at times.

I was baffled when I spent hours on Zeffo – one of the game’s five planets – and returned to my ship to discover I’d only explored 30% of the area. You can spend hours just exploring and discovering new ways to take out enemies while building up skill points in Fallen Order. The drive to unlock better techniques and characteristics is addictive.

Fallen Orders' design means that levels take a long time to unlock and get through, with shortcuts allowing you to get back to your ship a lot faster. Even so, this still makes traversal across multiple planets feel like a chore rather than an adventure.

So, you get tons of hours of play time but at the price of navigating the same caves and hallways time and time again. Save points – where you can spend skill points and rest to gain health stims – are sparingly placed.

You can only respawn at your most recent point so you can have multiple difficult encounters separated by two save points, one at the beginning and one at the end. The Souls-inspired design makes the whole process feel tedious sometimes.

The best parts about Fallen Order are the same as in any Metroidvania or action RPG title, but Respawn doesn’t exactly bring anything new to the table. For Star Wars games, the Jedi power fantasy and great swordplay are major boons. But as an actual video game Fallen Order doesn’t actually innovate anything at all.

Fallen Order is a game with intricate and satisfying combat – some of the best we've ever seen in a Star Wars game. But Respawn relies on that as a selling point, and focuses less on creating a polished experience.

Thanks to technical issues and the lack of fast travel and player-friendly save points, Fallen Order can sometimes feel tedious and tiresome.

Still, it is the best Star Wars game in years. Respawn taps into so much potential in the universe, and it makes Fallen Order ‘A New Hope’ for EA and the future of Star Wars games.

Though it isn't Respawn’s best work, Fallen Order is a great project… and that’s the Star Wars we need right now.

• Tactical, intricate lightsaber combat
• A vast array of large planets to explore at your heart’s content
• An optimistic glance into the future of Star Wars games