In the spring of 2019, a customer brought a red cardboard box covered in dust to the Minneapolis-based games store Heroic Goods and Games. Owner Paul Zenisek recognized the logo stenciled at the top: This was an early edition (Set 1: Basic Rules) of the original role-playing game, Dungeons & Dragons. The box was in astounding condition, the included dice still sealed in a baggie, and since Zenisek was already struggling to keep modern-day 5th-edition D&D books in stock due to raucous demand, he decided to check online marketplaces like eBay to see what this vintage copy was worth. After a quick survey, he offered $60 for it — half of the $120 price it sold for in the store a scant two days later.

“The seller was pretty stunned, honestly,” Zenisek says. “They were cleaning out their basement and thought, ‘Maybe this weird store will buy it.’ I think they would’ve thrown it in the trash otherwise.”

After Gary Gygax played Siege of Bodenburg at the first Gen Con in 1968, he became enamored with the Medieval period and sought to join like-minded individuals. He founded the Castle & Crusade Society and started the club’s fan zine, Domesday Book in 1970. 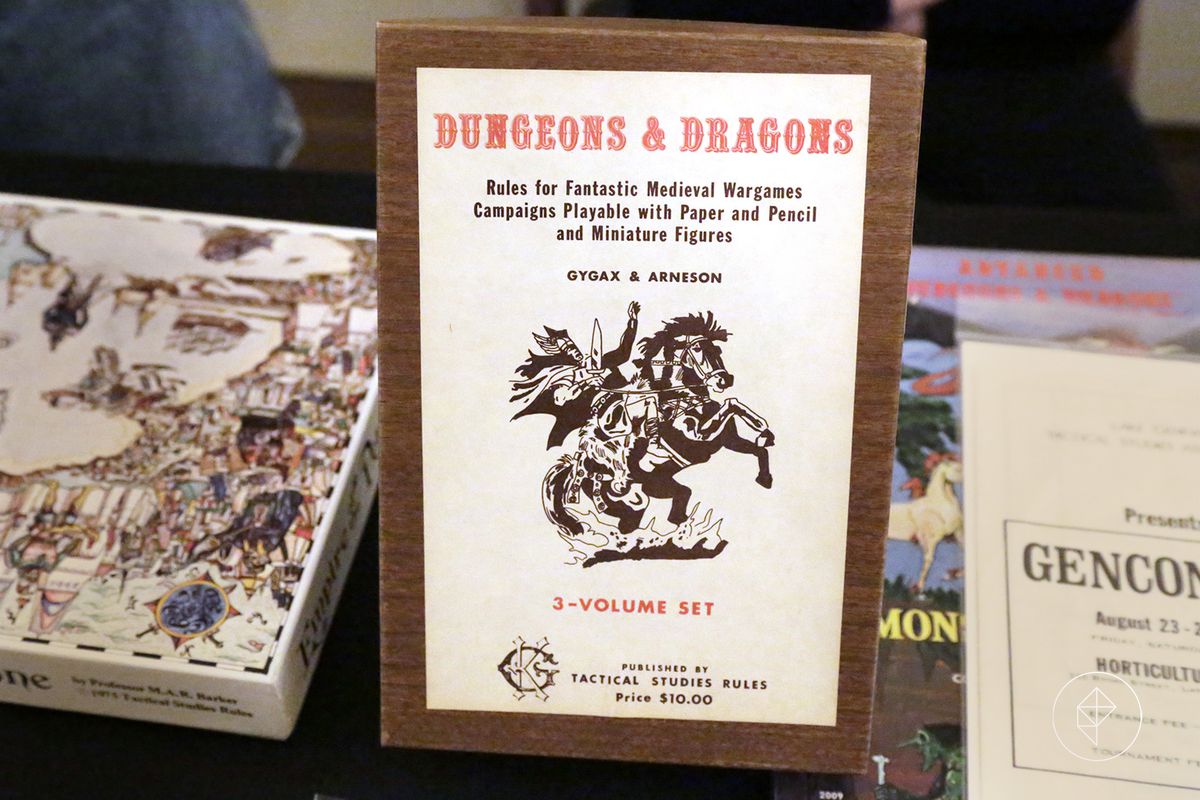 A rare first printing of Dungeons & Dragons, on display at the 50th anniversary Gen Con reception in Lake Geneva, Wisconsin, in 2017.
Photo by: Charlie Hall/Polygon

$22,100 for the Dungeons & Dragons first printing, a three-volume set by Gary Gygax and Dave Arneson, published by Tactical Studies Rules.

Only 1,000 of these boxes were hand-assembled by the Gygax family and friends. It is the holy grail of D&D collecting, as it represents the beginning of the role-playing game phenomenon. A copy once owned by Bill Hoyt, an original player in Dave Arneson’s Blackmoor campaign, sold at auction for a record $22,100.

This mini-adventure was produced with a cover in very small quantities, and they were handed out to a few employees at TSR as a sort of curiosity. The adventure, sans cover, would be included in TSR’s big-box D&D adventure games and Mail Order Hobby Shop orders throughout the ’90s. Only the incredibly rare covered version achieves the highest prices ever paid for D&D adventure modules.

Over the past five years, the release of D&D’s 5th edition, the rise of actual play podcasts and livestreams like Critical Role and Not Another D&D Podcast, and the nostalgic allure of Stranger Things have fueled a tidal wave of interest in pen-and-paper RPGs. But people trying to recapture those summer days of old by purchasing their old sets on eBay or at stores like Zenisek’s are likely in for a bit of sticker shock. According to tabletop collectors and vendors we spoke with, this flood of demand has driven prices for old D&D books and sets skyward at an unprecedented clip.

“I like to tell people that it comes in waves,” says Floyd Wesel, who helps run Games Plus, a game store in Mount Prospect, Illinois, just outside of Chicago, that has a reputation for stocking older pen-and-paper books. “And this is the biggest wave we’ve seen in a while.”

For years now, Games Plus has hosted seasonal auctions for physical games that bring in patrons from around the Midwest trying to get their hands on oddities and rarities of all stripes. But, as Wesel tells it, while the current swell of interest has brought in plenty of business, it also presents its own share of problems. Historically, Wesel and company have relied on a combination of eBay, estate sales, and casual trade-ins to fill their shelves, which has allowed them to enjoy relatively high margins at the till. However, the ravenous hunger for all things retro has pushed costs to such an extent that they’ve had to consider adjusting their own maximum prices in-store, which Wesel describes as an uncomfortable process. Local buyers are pushing back as the wider marketplace heats up. He points to the three-volume Dungeons & Dragons boxed set from 1973, commonly referred to as the “white box,” as an example. The first few printings came in a woodgrain box, which can go for thousands of dollars at auction.

“In general, copies of the white box are generally worth a couple of hundred bucks in good condition, which is somewhere where it probably should be,” Wesel says. “But recently, we’ve seen eBay auctions go for two, three, five times more than they should for the condition that they’re in. If we don’t feel confident about an item’s quality, we don’t want to price them that high; it just doesn’t seem right. But, when these items are going for more than we’d ever price them at the store, that really shows that our idea of what a reasonable price is probably has to change.”

Wesel agrees that the fond memories of those who cut their teeth on these older editions are fueling this insatiable demand, at least in part. However, he’s met several neophytes who have come to the hobby in the past few years looking to collect these older books as a way of getting in touch with its roots. Some are into it simply for the thrill of the hunt.

“I’d argue that these younger folks look at these books and sets like they’re fetish objects, or artifacts of a previous era,” he says. “It’s not actually about the game; it’s about owning a piece of history.” 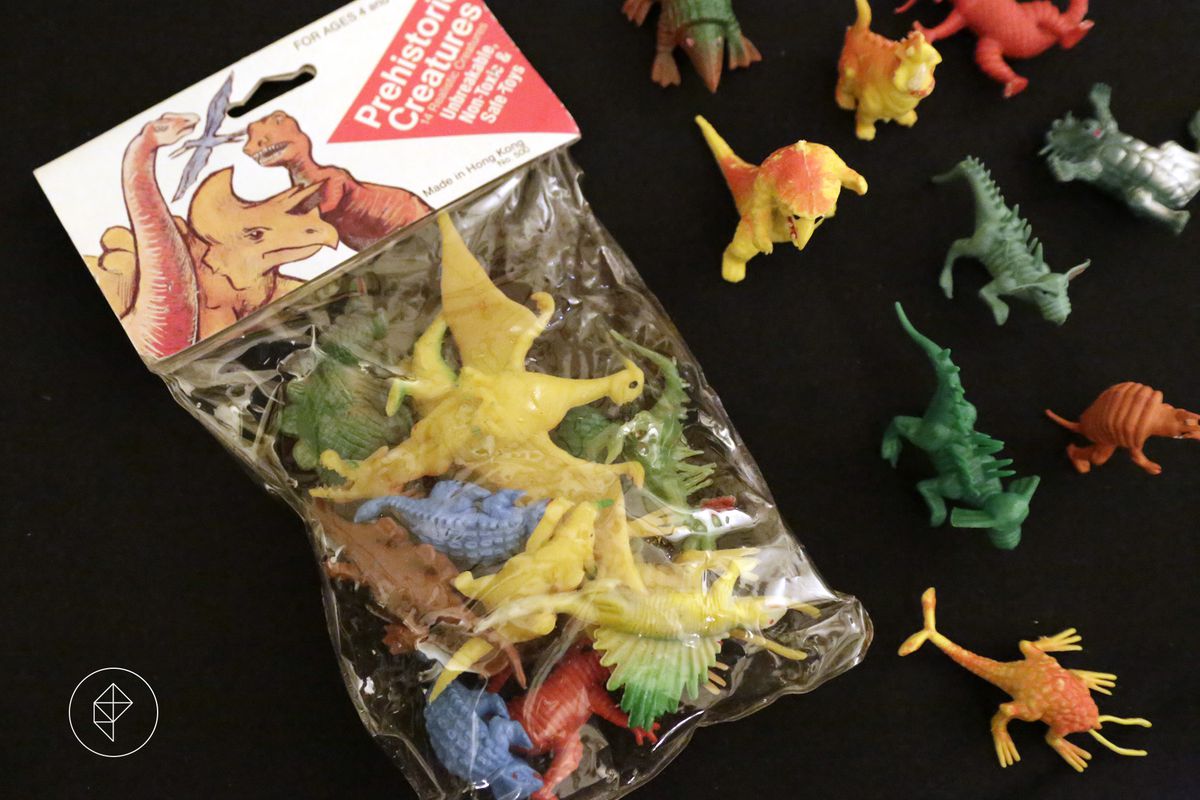 A vintage bag of “chinasaurs” on display at Gen Con’s 50th anniversary reception in Lake Geneva, Wisconsin, in 2017.
Photo by: Charlie Hall/Polygon

One of the original inspirations for Dungeons & Dragons was a miniatures game known as the Siege of Bodenburg. The game was played using a 40 mm scale castle and miniatures made of a plastic called Elastolin. Gary Gygax was so enamored with the game that it’s said he kitbashed some of those figures for his earliest campaigns.

For monsters, he likely went to the local drug store in Lake Geneva, Wisconsin, to pick up a bag of monsters known as “chinasaurs.” That’s really the only explanation for the look of iconic beasts like the Owlbear and the Rust Monster. There’s probably no better write-up of how these goofy little critters ended up in D&D than a post by author and illustrator Tony DiTerlizzi.

As it turns out, you can still buy chinasaurs on eBay, either in large bags or as singles. And the market is heating up. A few years ago, I picked up a Rust Monster for $14.99. Today that same toy is selling for $100.

For others, the yen for old D&D totems extends beyond the actual game itself, and into the troves of objects owned and created by the people who helped make the hobby happen. Paul Stormberg, who owns and operates The Collector’s Trove, an online auction house that specializes in selling the unique memorabilia owned by pen-and-paper innovators like Gary Gygax and Dave Arneson, admits that the increase in prices has been a boon to his own profile. But he notes that many of the people who started their careers at TSR are quickly approaching retirement age, and these sales can help them form a nest egg to build from.

“It’s been said many times, but these were creative people who weren’t well-suited for running a company,” Stormberg says. “People who worked at TSR were often very young, being paid minimum wage for their efforts. Being able to get [$10,000] or $20,000 for original art, maps, pages, that sort of thing — for a lot of these people, it’s the only thing they’ve ever really got out of being part of an incredibly important era.”

“The early editions of D&D are absolutely flush in amazing fantasy art,” he continues, “and you just don’t see that so much today, because it’s expensive. Back in the day, these artists were being paid almost nothing for their work. I feel like I benefit karmically by allowing them to finally get what it’s really worth. ”

When it comes to the people buying these old rulebooks, a question arises: Just how many of them plan to use these books to actually play the earlier editions of the game?

While Wesel pegs that number as vanishingly small, he does point out that in some relatively small quarters of the tabletop community, these old rulesets are beginning to grow more popular, as part of a grassroots movement known as the old-school renaissance, or OSR. Though PDF copies of the original rules are available online if you know where to look, most players generally rely on “retroclones” like Labyrinth Lord and Basic Fantasy RPG to capture the spirit of the earliest editions of D&D, if not every facet of their somewhat unintuitive rules, like the glorious mess that is THAC0.

For Stormberg, these newer games might capture the freewheeling, rulings-not-rules approach employed by the earliest Dungeon Masters, but they don’t exude quite the same feel. He compares the experience to emulating a favorite video game versus playing it on original hardware, or driving a vintage car versus a custom-built reproduction.

Though Stormberg certainly doesn’t begrudge people for grumbling about the vast cost of getting a game they once owned many years ago, he says that the increased prices do have a benefit: preservation.

He puts it quite simply: “If someone worked at TSR, and they’re about to turn 70, and they have a bunch of historic D&D stuff in their basement, they’re going to bring it to me, or somebody like me, if it’s worth money. If it’s not, then it’s going in the trash.

“Yes, D&D is just a game, but it’s a type of game that didn’t exist before Gary Gygax and Dave Arneson, and it’s one that’s changed the way we play. In the scale of human endeavor, I’d say that preservation is the more important aspect, at least for me.”