Home » The Battle Of Polytopia Review: What An Adorably Violent War

The Battle Of Polytopia Review: What An Adorably Violent War 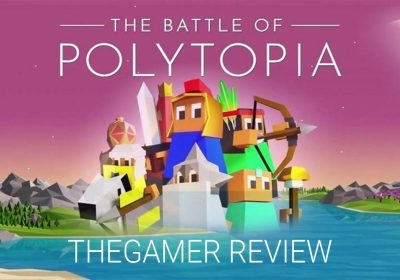 While I like the Civilization series along with other popular 4x strategy games, they can be a little on the lengthy side. That’s why the idea of The Battle Of Polytopia appeals to me. It offers a bite-sized version of the typical 4x strategy experience with an adorable art style and a simplified tech tree of upgrades.

However, this game’s act of dumbing down its 4x strategy gameplay adds its own complications. There are a lot of features and gameplay elements that are sorely missed. Thus, the real battle of The Battle Of Polytopia involves fighting with its clunky visuals and struggling to stay engaged with its voxel world. 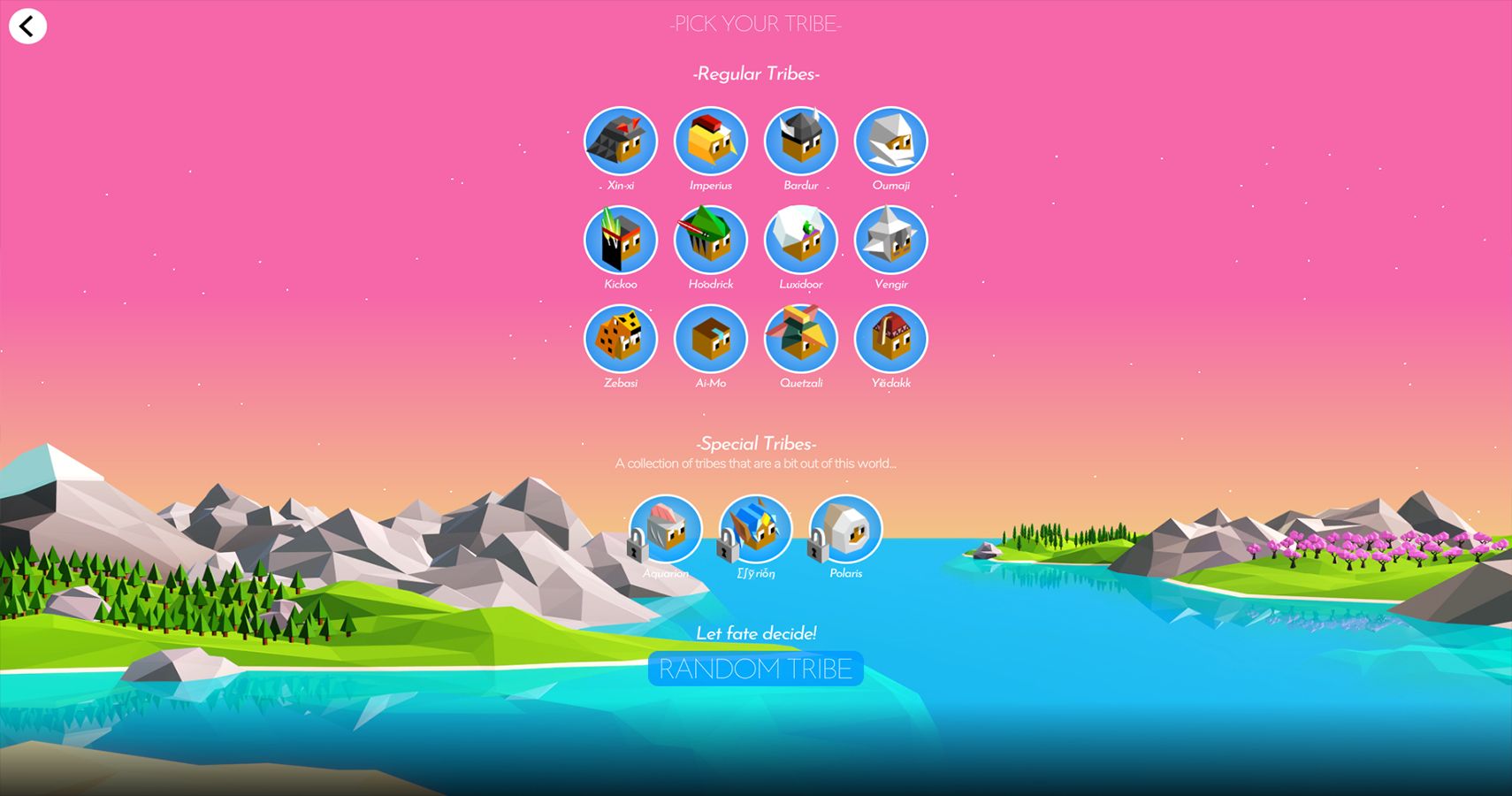 Polytopia offers three main modes: perfection, domination, and creative. Perfection gives you thirty turns to achieve a higher score than all of your rival civilizations. Domination is a straight-up brawl where you need to conquer every city and eliminate your opponents. Lastly, creative lets you set the perimeters of the match and play however you like. Each mode gives you difficulty options from easy to crazy, and allows you to compete against up to 12 other Polytopian tribes.

Speaking of the tribes, there’s a solid selection of them for you to choose from. They all seem to be based on a historical civilization, such as the Ancient Rome-inspired Imperius tribe or the Viking-esque Bardur tribe. They’re also rendered in a colorful voxel art style that reminds me of a game I reviewed previously, Riverbond. This gives The Battle Of Polytopia a pleasant, warm look that makes the violent brutality of war seem almost charming. Of course, it also looks a lot like a ton of other mobile games that have employed this style in the past, but some of the unit designs are very cute.

Many of the tribes play the same way, but new tribes are occasionally added into the game as paid downloadable content. For the purposes of this review, I was able to use the newest tribe, The Cymanti. They’re an odd civilization since they rely on giant bug troops and poisoning enemy soldiers, but their unique feel made them one of my favorites to play as.  So these DLC tribes may be worth looking into if you don’t mind paying a little extra for them. 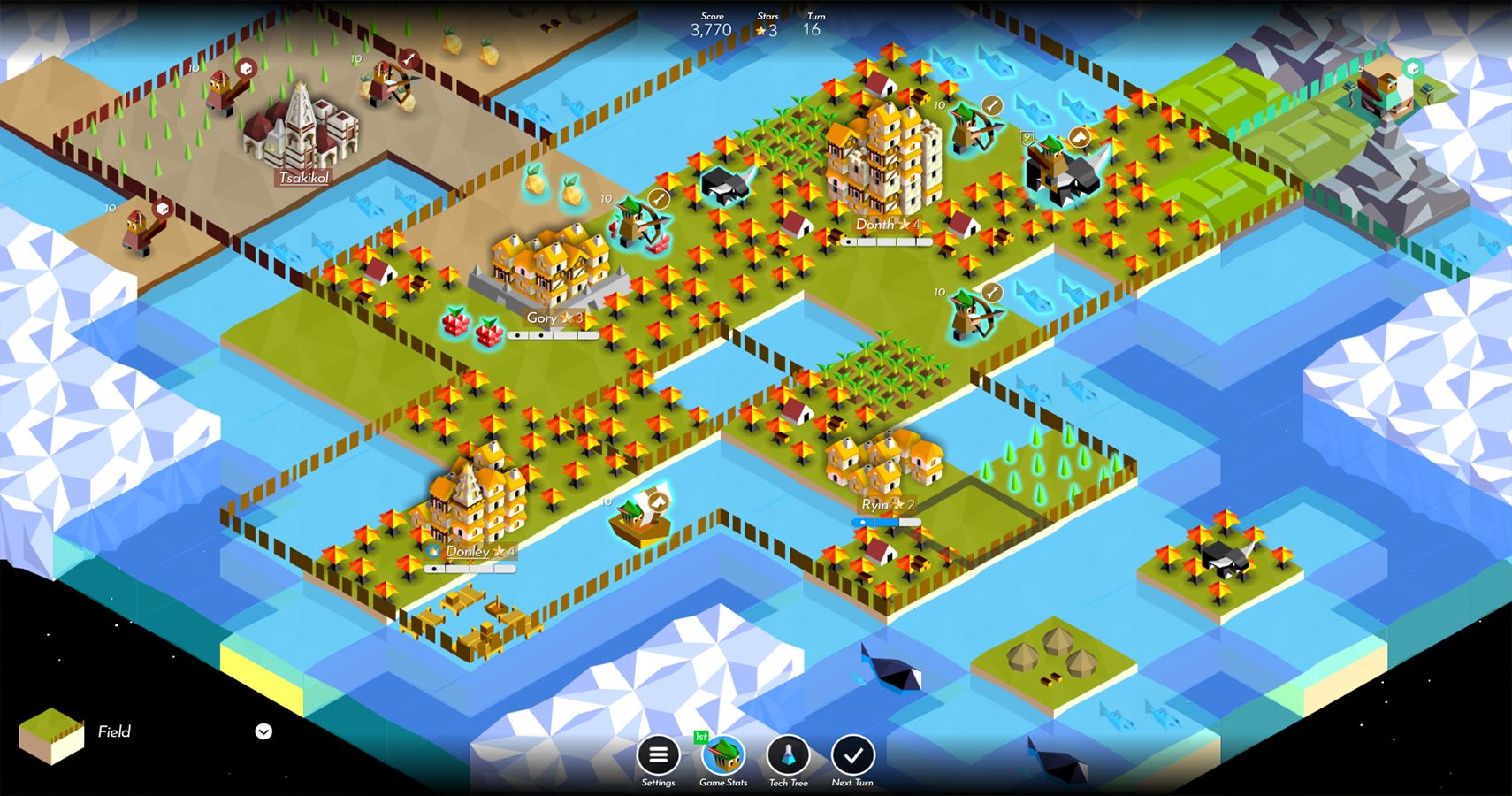 The gameplay itself is centered on building up your cities by creating new structures and harvesting resources in order to increase the population of your empire. Crafting buildings, training soldiers, and researching new tech all cost you stars, which acts as Polytopia’s currency. Your cities will generate more and more stars as their populations continue to grow. A bar underneath each city fills up each time you add a new building or gather resources and you get a reward once it’s full. You might get extra stars, a super-sized soldier, a border wall to protect the city, etc. You acquire new cities by moving one of your units into a town that’s unaffiliated with a current tribe or by invading enemy tribe cities and claiming them as your own. All of this ties into an overall score as you earn points for certain actions.

It’s pretty standard strategy game design, but it moves at a decent pace which can make matches fly by. However, enemy tribes tend to be a little on the dumb side. Playing the game on normal or even hard against the AI was a cakewalk, so I had to turn it all the way up to crazy difficulty to get enough of a challenge. 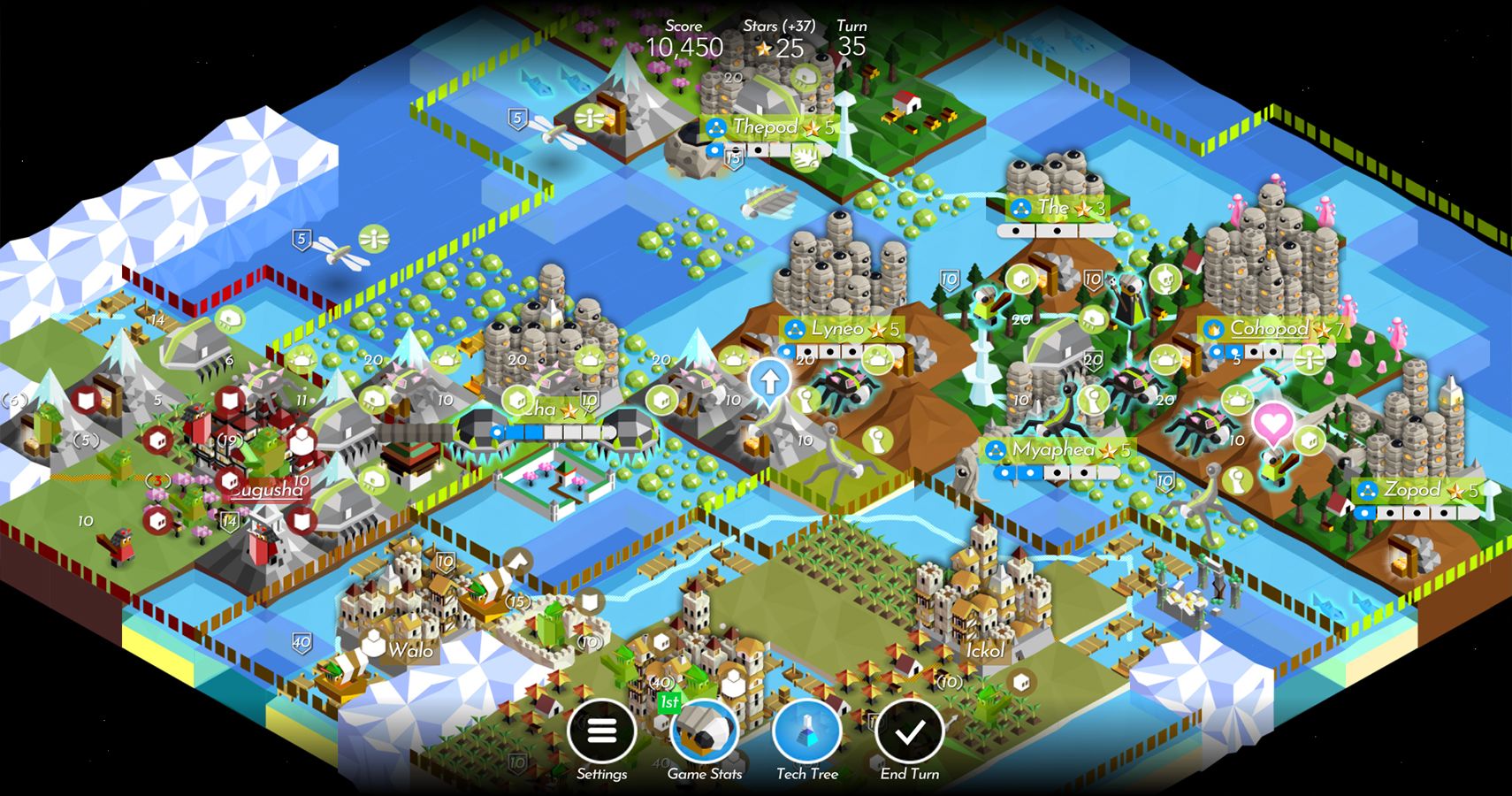 But perhaps the biggest challenge of all with Polytopia was trying to decipher exactly what I was looking at. These maps can become incredibly cluttered as they’re not especially big. There can be so many units and buildings scattered about that it starts to resemble one giant visual mess. You also can’t rotate the map around to get a better angle on the situation and you can only zoom in so far. It often got to the point where I wasn’t sure where certain troops were or where I could lay down new buildings.  This led to moments where I would miss a troop’s turn because I didn’t see them amidst the sea of units and buildings.

Combat isn’t all that advanced as there isn’t much variety in your units. You start out with a weak soldier, then you do some research and get one that can ride animals. Then you get ranged units, then stronger ranged units, and finally, you get whatever the biggest and baddest unit is for the tribe you’re controlling. At that point, you just start making as many of your best units as you can and just smash them into enemy soldiers until one of you wins. For that reason, I preferred the perfection mode as that’s based more on your score, which means the various challenges and monuments have a purpose beyond providing you with more stars.

Weak combat would be ok if there were more things to do in Polytopia, but the building is pretty basic, and advancing the tech tree doesn’t take very long. The research you do to unlock new buildings and units can be completed fairly quickly. Once you’ve maxed out the tech tree you’ll just be clicking on parts of the map to see where to put down forges, sawmills, temples, etc.

There wasn’t really a rhyme or reason to what I crafted. I just built whatever I could to make the numbers go up. In a lot of these games, it feels like the different properties you place do something that ties directly into another aspect of the gameplay. Maybe you might make a farm, which provides food for the town, which then gets sold through a merchant who can be sent to other towns to accrue money, and so on. Here, all you can do is fill population bars so you can generate more stars. It all starts to feel one-note and I found myself with a massive surplus of stars because I was running out of room to build things and I could only train so many new soldiers per city.

The minimal strategic gameplay might work better in the multiplayer mode. You can set up or join various matches against human opponents. There, these battles of wits between tribes could be more eventful and challenging…If you can find an opponent that is.

I tried to get into an online multiplayer game multiple times only to find myself in a lobby that wouldn’t start. Strangely enough, some of these lobbies seem to have been waiting for players for upwards of 90 days. I even tried up setting up my own lobby for people to join but got no bites from any other Polytopia players. This title does support Steam’s Remote Play Together function, so the best way to get a multiplayer game going might be to add some of your gaming friends. Unfortunately, I couldn’t find anyone willing to play this with me, so I can only assume the multiplayer mode is an improvement over singleplayer. 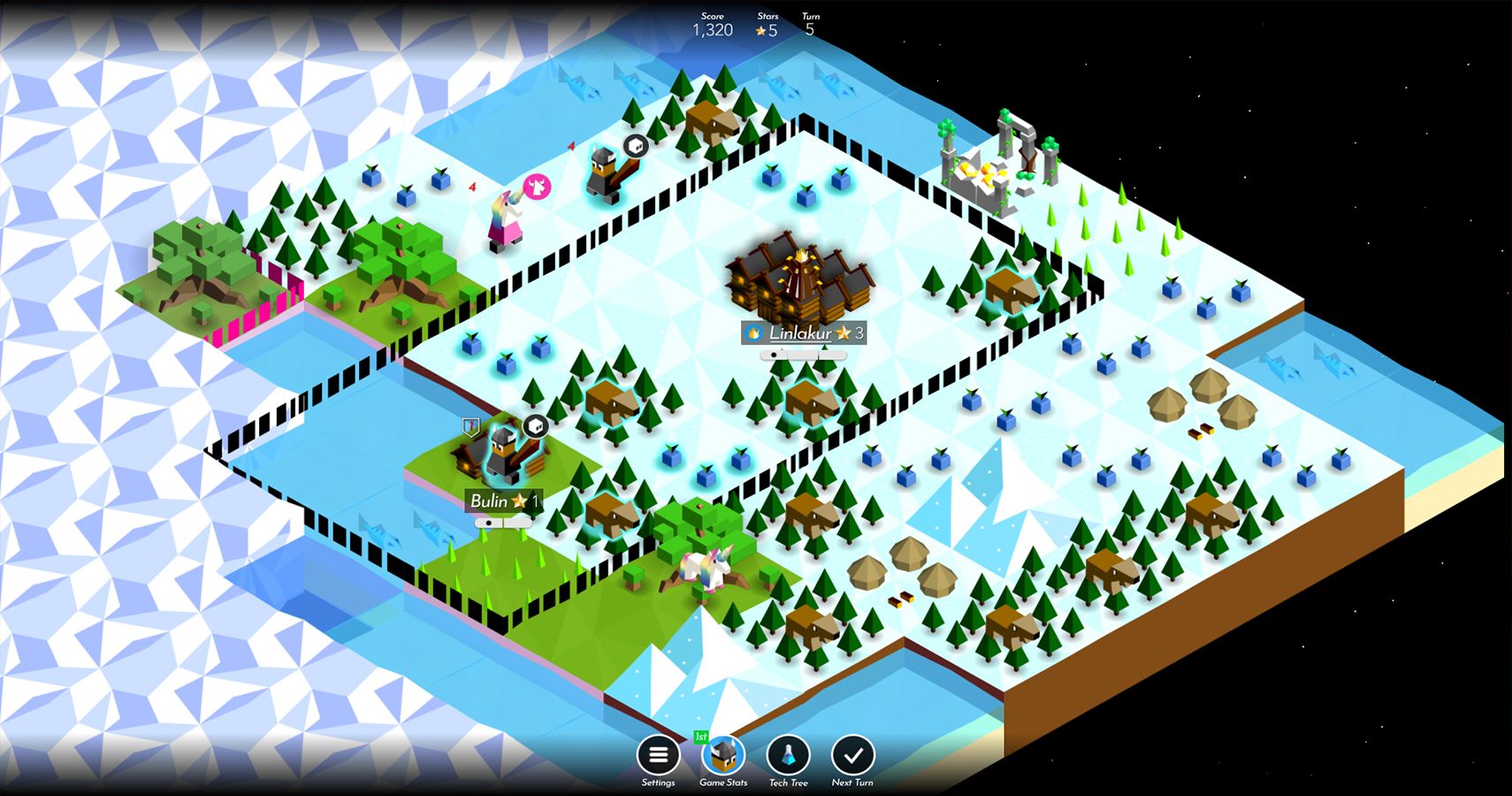 Considering that The Battle Of Polytopia is a mobile game ported over to PC it operates fairly well. The controls are intuitive, it’s not hard to learn how to play – although it could have benefitted from a better tutorial – and it won’t take ages to finish a game. But in the act of simplifying 4x gameplay, it may have removed too much of the actual strategy. Rounds typically devolved into tribes sending unit after unit towards each other and cities constantly switching allegiances as they were captured, uncaptured, and re-captured. The addition of new tribes may freshen things up, but that depends on whether or not you want to throw down extra cash for them.

The multiplayer component is the key selling point here as quick multiplayer strategy matches sound fun, yet even that is hurt by the apparent lack of an active online player base. All of these issues leave The Battle Of Polytopia as a title that doesn’t have enough options and content to make it worth going to war for.

NEXT: Little Nightmares 2: The Story Explained 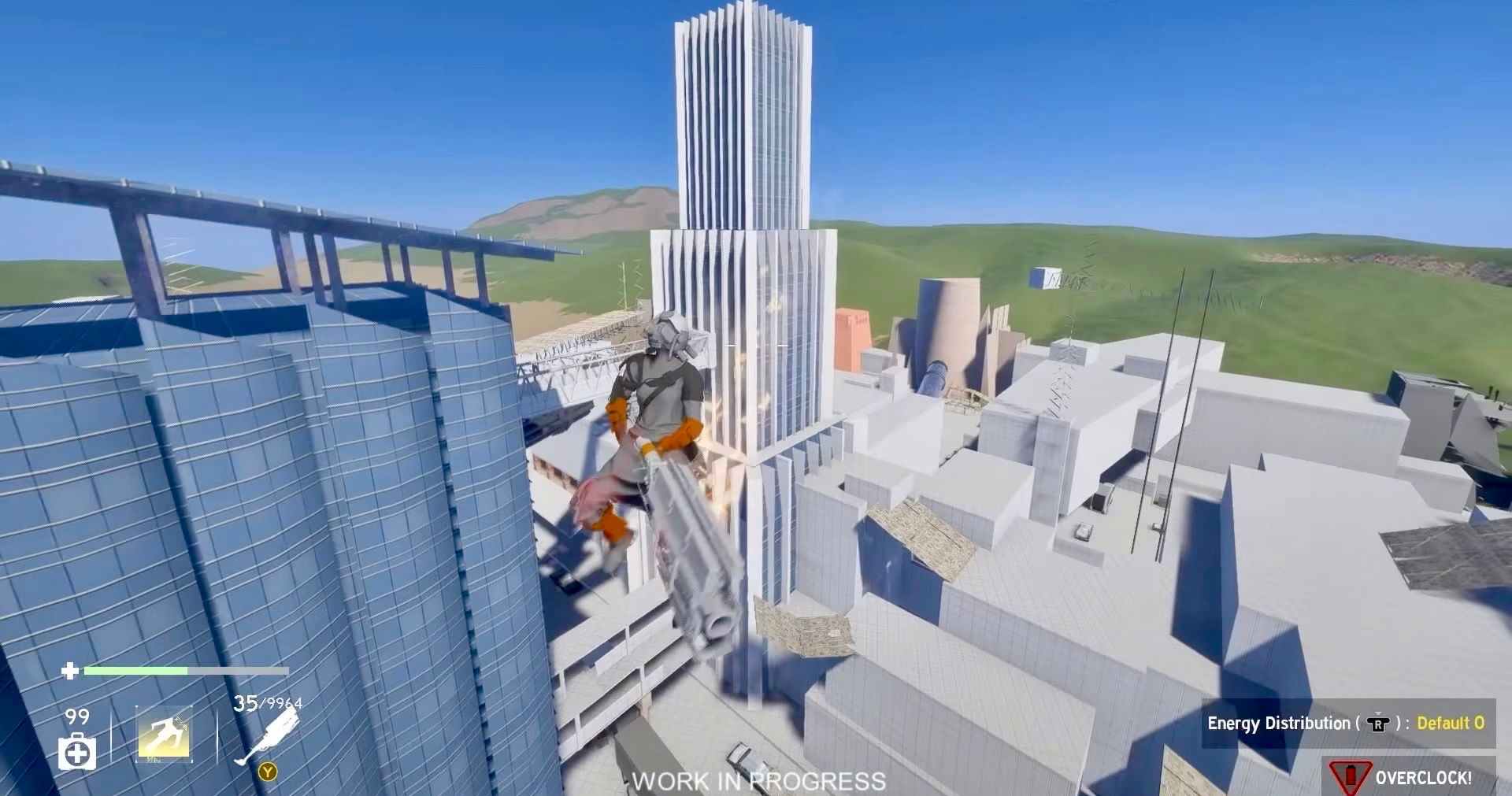