The best indie tabletop RPGs of 2021 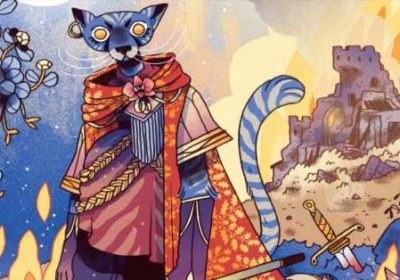 Tracking the landscape of independent tabletop role-playing games can be intimidating. New titles seem to drop every other day, and they all live on relatively obscure storefronts like Itch.io and DriveThruRPG. Those platforms’ curation and discoverability features are a far cry from something like Steam, and as a result, shopping for a new indie TTRPG can feel like a lottery system for both players and creators.

But the effort of keeping tabs on the indie TTRPG scene is always worth it. The design landscape that lies beyond the shadow of Dungeons & Dragons is exciting, weird, and seemingly limitless. Some games bend and twist the flow of established conventions into bold shapes with new destinations, while others turn over rocks only to unveil a small but vibrant setting crawling with inspiration.

This list of games, presented in alphabetical order, hopes to attract some attention to five bright specks in an unfortunately crowded sky that many tabletop players may have overlooked. Some are the culmination of the last decade’s worth of trends, while others are standouts in emerging subgenres. Still others force the hobby to interrogate its long-held Western influences and explore the shape of stories set free from ingrained tropes.

If the apocalypse were on your doorstep, would you rush to greet it with a weapon in hand and a curse on your lips? Or would you worry away the minutes on the clock as they counted down toward your impending doom? ARC: Doom Tabletop RPG, the newest game from designer momatoes, makes room for both. The stories told with its tight, narrative-focused engine are fueled by urgency and built upon the foundation of precious moments.

ARC mechanizes this tension with a real-world timer that counts down to the end of each game. ARC’s Doomsday Clock is set at the beginning of a campaign and advances in real time. A four-hour campaign is literally only four hours long. Players suddenly have a very real action economy to deal with. Short rests, which pass by in the blink of an eye in other systems, mean taking five real-world minutes away from the table as another pivotal narrative moment slips beyond the event horizon.

Spells and abilities may also require players (not characters) to perform rituals, such as closing their eyes for three minutes to gain True Vision or agreeing to every request for half an hour in order to sway a guard’s mind. This melding of perspectives, alongside an impeccably designed, genre-agnostic ruleset, makes playing ARC feel like an ice bath — bracing and invigorating.

I’m as surprised as anyone else to find a cyberpunk game on my list in 2021, given the pop culture oversaturation that recently reached its zenith with the botched launch of Cyberpunk 2077. Emanoel Melo’s lean and mean CBR+PNK earns its place by not overstaying its welcome.

Fully contained within two tri-fold pamphlets, the Blades in the Dark-inspired RPG creates lightning-quick bursts of dystopian gameplay. It achieves this by focusing the action on the one last job undertaken by a desperate group of hackers. Crews are either pushed to their limits by their corporate oppressors, or maybe just rolling snake eyes one too many times in a desperate, last-ditch gamble to come out on top. Players find their characters at their lowest, and use cinematic action to explore the how and why of a tragic end.

Like other similarly inspired games, CBR+PNK uses flashbacks that tend to grant characters the keys to new and unexpected doorways. Digital corruption seeping into their gear and a breakneck pacing means groups must roll with the punches. Choices won’t get easier, and there’s only so much gritting the group’s collective teeth can take before something breaks. But that’s the whole point. CBR+PNK simply doesn’t allow itself the time to navel gaze, making it my favorite way to engage with this particular style of genre fiction.

Playing .dungeon is a singular experience that bends the common conception of role playing even as it attempts to crystallize a time when rules mattered less than having fun with your friends. The world of Annwn seems designed to evoke playing mid-2000s MMOs, where GameFAQs were sacrosanct and online connections were a landline call away from dissolution. Everything ends in file extensions, and discrete adventures can be slotted into .dungeon’s rules like mods.

Review: .dungeon turns what you love into inspiration for a passionate tabletop RPG

Character avatars let your wildest high school daydreams run rampant, but it’s the game’s character classes that steal the show by tying real-world actions to in-game feats. For example, the Hacker can hide a dice roll from the GM or add the results of a d20 to their roll once per session, while the Mage uses circled words and phrases from an actual book to work magic in the digital world. Tattoos become summons, compliments become buffs, and the party’s bard can create a personalized mixtape for extra effect.

Suffusing all this charm is a mood of fleeting bliss, and .dungeon sessions often feel like tapping into halcyon memories that hurt to remember in the very best way. The group must narrate how their time together ends once each campaign comes to a close. That could mean naturally drifting apart, returning to school after summer break, or showing up on the last day of play before the servers are finally shut down.

The elevator pitch for Gubat Banwa is wuxia fiction by way of classical Filipino folklore, leavened with a heavy dash of Fire Emblem. And while that description alone makes it one of the best mashups I’ve read all year, it still doesn’t capture the loving attention to detail and the dedication with which designer Makapatag has crafted this rich and satisfying tabletop experience.

A love letter to the much-maligned 4th edition of Dungeons & Dragons and the style of tactics video games that inspired its combat, Gubat Banwa devotes a considerable amount of its pages to actions, positioning, and related effects. It knows there’s an audience hungry for crunchy combat and it sets a mean buffet for that crowd. Those less inclined to gobble up the next XCOM should pore over the dozens of evocative character concepts such as swordfish-straddling warriors, flower necromancers, and the deadly musicians known as Strifesingers.

If positional advantages and damage affinities are the wheels of this game, its narrative engine is a catalyst instead for melodrama and politicking. The most dramatic actions are usually those most likely to succeed, and epic enemies-to-lovers-to-enemies storylines are its bread and butter. Gubat Banwa uses the heightened emotions of aristocratic, beautifully dressed warriors locked in eternal conflict to channel an adoration for Filipino history. It defies any reductive framing of the Philippines and its folklore even as it provides player resources for depicting the game’s cultural ties with both accuracy and respect.

Wanderhome respectfully demanded the attention of the indie RPG community in 2021 like a grandparent that wouldn’t let you visit without providing a hot meal. Jay Dragon of Possum Creek Games took a framework of wholesome traveling — using an adjective nearing dangerous levels of misapplication — and delivered a treatise on post-violent roleplay far deeper than its veneer of bee farmers and anthropomorphic animals would initially suggest.

Review: Wanderhome is a Redwall-inspired RPG that arms players with dialogue, not daggers

Built on the Belonging Outside Belonging principles first established by Avery Alder in Dream Askew and Dream Apart, Wanderhome cuts both dice and game masters from its calculus of play. Instead, players use simple questions to establish characters that are equal parts earnest and melancholy, safe in the knowledge of who they are until another traveler awakens an insistent yearning within them.

As I said in my review, it is all too easy to play Wanderhome as a cozytime simulator — not that such a tack is by any means wrong. But what elevated the game and earned its reputation was its quiet insistence that conflict takes many forms, and that the scars of violence should not easily heal. After all, a grandparent’s wisdom springs from experiences both fond and haunting.