The Best Thing About Elden Ring Is The Magnificent Jumping Horse 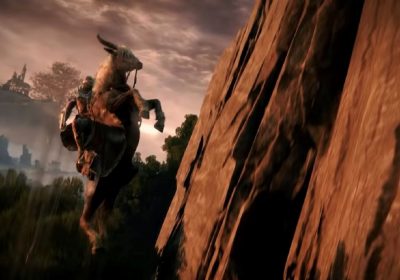 Yesterday, after two years of waiting, we finally got some Elden Ring gameplay footage. And by ‘we’, I mean ‘you’. I’ve never understood the mega hype swirling around a game that nobody had seen anything of bar a CG trailer and a logo – a few months back I even wrote as much, imploring you all to calm down after reading what felt like the 237th ‘Elden Ring EXPLAINED’ based on the square root of nothing. However, after seeing the trailer, I’m… well, if not convinced, I’m at least intrigued. By the horse, if nothing else.

The Soulsborne games are probably the biggest void in my gaming experience; certainly if you’re going off titles from this century and not must-play ‘80s classics that I’ll probably never touch. I dabbled in the first one and it never quite clicked; it wasn’t so much the difficulty as the fact I had no idea where I was going. Bloodborne is in my backlog, but I can’t be the only one whose backlog grows more and more insurmountable with each passing day. For that reason, I’ve been on the outside of the Elden Ring hype these past two years. Now I’m on the periphery, but I think I might be here for completely different reasons to everyone else.

Since I’m not a Souls player, ‘open-world Dark Souls’ doesn’t mean too much to me. It’s like if I told you the next Umurangi Generation was going to be an RTS. Your first reaction might reasonably be “What the fuck’s an Umurangi Generation?” – by the way, it’s a fantastic photography sim with gyro controls about, amongst other things, the danger of fascism. Go play it. Though I know what an open-world Dark Souls largely entails, it’s hard for me to get excited about a concept I can’t fully grasp. Instead, it’s all about the horse. And phwoar, what a horse, am I right? 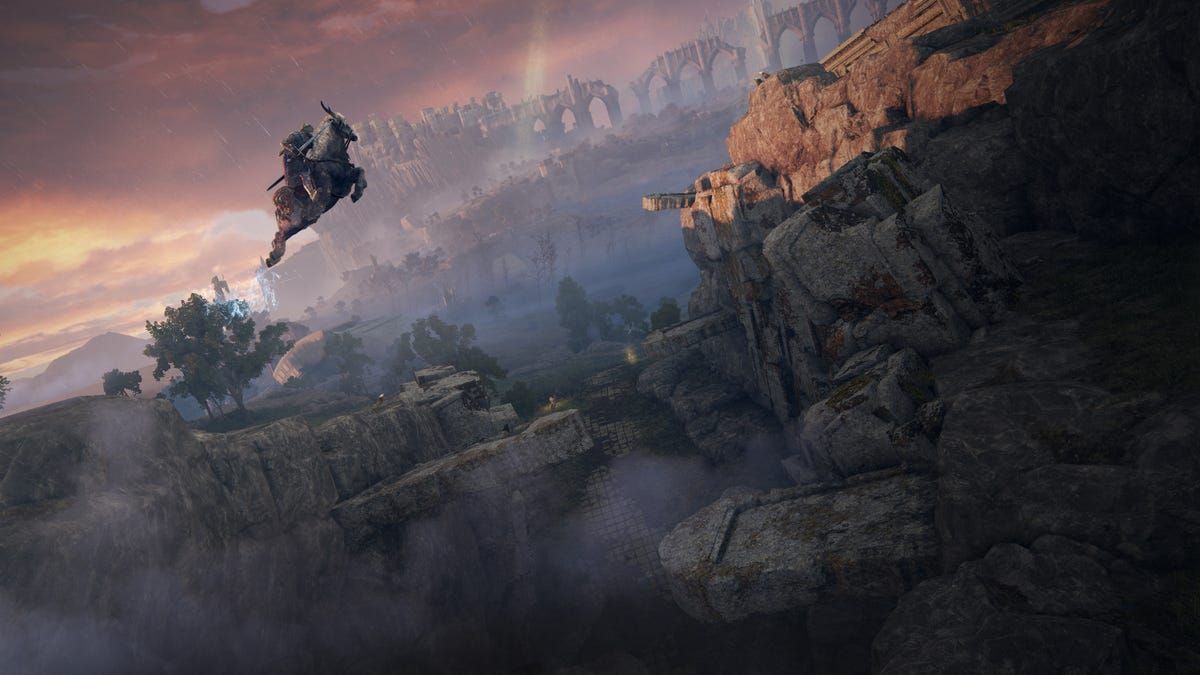 I don’t love this horse the way Gurbanguly Berdymukhamedov does (now there’s a crowd pleasing gag!), but instead I love the horse the way I love the hoverbike in Jak 2 – the best Jak game. Elden Ring’s horse looks like it has been ripped from a ‘00s era platformer, and I love it.

This horse double jumps, and… wait a minute, say that again. This horse double jumps! Have I been misled that Souls games are murky metaphorical ventures into a dark, gruesome world of gothic shadows and horrific monsters, or is silly stuff like this par for the course? Bloodborne might be getting bumped up the ol’ backlog list if so. You also get to roam around the world, leaping across broken bridges, leading your horse into combat, and exploring meadows filled with monsters. Horse riding is a common feature in many video games and has been for decades, but this specifically feels like a platform game because of how kinetic it seems to be. Typically, games either make horses into cars – steer them where you want to go while controlling the speed – or aim for a more lifelike recreation of a horse where the beast needs to be taught, tamed, and revered in order to get the best out of it. However, Elden Ring seems like it wants to emphasise the fun of horse riding, and that means a more cartoonish, platform style interpretation of what a horse can do.

We also see the horse leapt straight up a sheer, vertical cliff face, although the glowing white markings on the ground below seem to suggest the jump is assisted by magic, meaning huge Cristiano-Ronaldo-vs-Sampdoria leaps can probably only be triggered at specific points. 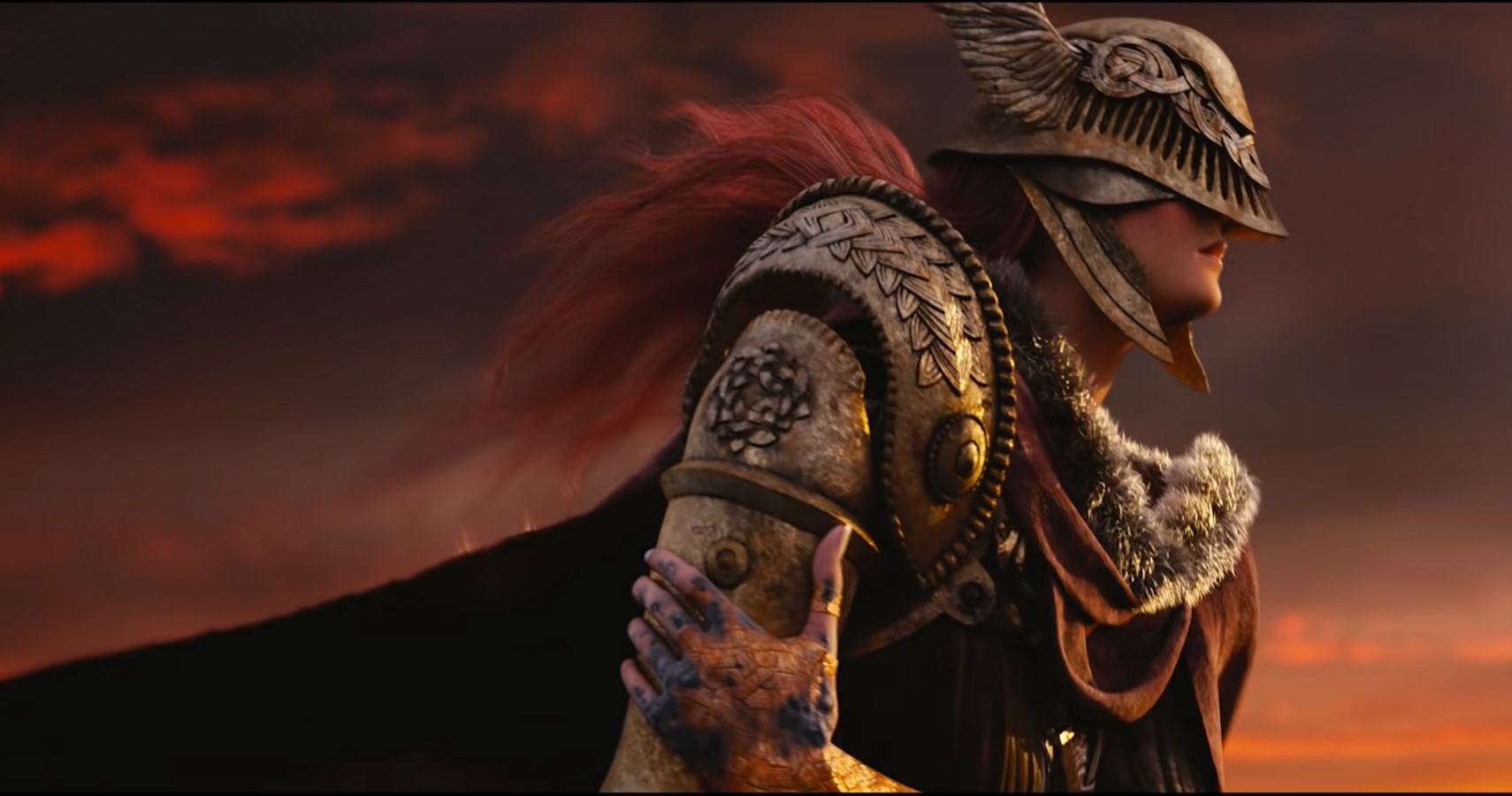 It seems like a decent chunk of the game takes place indoors, with our protagonist (let’s call them Mr. and Mrs. Ring) creeping through caverns or ascending ladders. The Rings – yeah, in my head Mr. and Mrs. Ring are married even though heteronormativity is gross – don’t seem to have the same platformer vibes as their horse, instead moving more methodically as they make their way through each crypt. Still, it is to be a more open experience, meaning you’d expect lots of horseback riding, so there’s plenty of reason to be excited.

It’s set to release in January 2022, although delays are a constant possibility in game development, doubly so in the pandemic. Still, Elden Ring has moved from an ever-so-slightly irritating meme that comes around whenever there’s a games event, expo, or showcase into a title I’ll be keeping an eye on as next year approaches with the ceaseless, abominable pace of time marching forward remorselessly.

Elden Ring is going to be pretty hard, if it references other Souls games I’ll be lost, and I won’t have a clue what I’m doing with the combat. Dat horse tho. Yeah, okay. I’m in. Room for one more on the hype train, yeah?