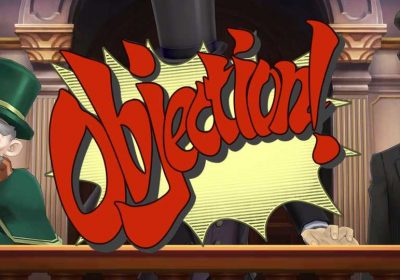 Capcom has announced that it's collaborating with the city of Osaka on a campaign to steer kids away from drugs. The press release notes that cannabis use in Japan "has become noticeable in recent years" and that characters from the Ace Attorney series have been roped in as an "enlightenment measure" to keep Japan's youth on the straight and narrow. The streets of Osaka, including police stations and schools, will be bombarded with 6,000 posters and 4,000 leaflets bearing the faces of several characters from The Great Ace Attorney Chronicles, a Phoenix Wright prequel partly set in Meiji-era Japan.

The Ace Attorney series' iconic "Hold it!" speech bubble is printed on the poster with—according to a translation by Japanese gaming news site Automaton—the words "Marijuana will steal your future!" below it. It also features prominent artwork of Susato Mikotoba, Kazuma Asogi, and Phoenix Wright ancestor Ryunosuke Naruhodo—hugely popular characters in Japan. According to Capcom, this project falls in line with its corporate philosophy of "working to resolve social issues" including climate change and "the sound development of children." It's also used Street Fighter characters in similar campaigns.

Weed is incredibly illegal in Japan. While it's now legal to use recreationally in many parts of the world, Japan has doubled down on its hard-line position. There has been a surge of weed-related arrests, as well as a number of high profile public awareness campaigns. If you get caught growing, selling, or transporting it, you could serve 7-10 years in prison. For possession it's 5 years and a fine. However, despite this somewhat draconian approach, marijuana use in Japan has more than doubled over the past decade—which officials have attributed to "more positive portrayals of the plant coming from abroad." 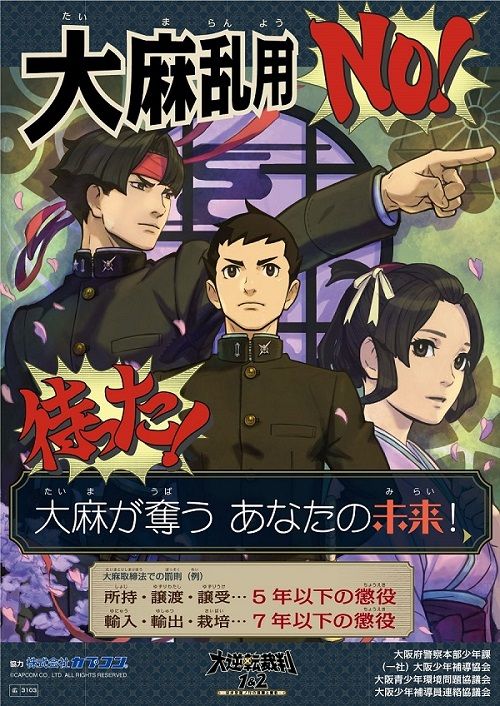 This isn't the first time video games have been used to warn kids away from the dangers of weed. In 2009, anti-drug organisation Above the Influence warned gamers that smoking weed would affect their reasoning skills and reaction time, making them suck at games. In the 1990s, arcade games in America often carried the FBI-approved message "Winners don't use drugs." And who could forget NES 'classic' Wally Bear and the NO! Gang, an entire game built around a strong anti-drugs message. But Japan is still something of a pioneer when it comes to using established, beloved video game characters to get the message across.

The Japanese really don't mess around when it comes to drugs. In 2019, sales of Yakuza spin-off Judgment were suddenly halted when actor Pierre Taki—who played yakuza captain Kyohei Hamura in the game—was arrested for cocaine possession. Just a few months later, Sega announced that it had replaced Taki's voice and likeness with that of actor Miō Tanaka, and the game promptly went back on sale—while still managing to hit its scheduled Western release without any delays. Amusing side note given Taki's arrest for allegedly partaking in snow: he also played Olaf in the Japanese Frozen dub, before that was also pulled.

Ace Attorney honestly feels like a perfect fit for an anti-drugs campaign. I mean, it's a game about upholding the law—and Japan's drug laws are some of the most fiercely and aggressively upheld in the world. It's still a bit weird seeing characters from a game I love being essentially narcs, though—and I don't think it would wash in the West. Can you imagine Master Chief warning kids away from the dangers of the evil leaf marijuana? Halo Infinite would lose half its multiplayer population if the message somehow got through to people.