They’re calling this the year of the samurai. And why shouldn’t they? The team at SNK Corporation has spent the last several years working to revive the venerable Samurai Shodown series, and the new entry finally launches this month — with an anthology of Samurai Shodown classics on the way in the fall. Evo, the world’s biggest annual fighting game tournament, will also feature 2019’s Samurai Shodown as one of this year’s nine main-event titles.

Known as Samurai Spirits in its native Japan, as it always has been, SNK’s latest is the first mainline Shodown game in more than a decade. Part prequel, part reboot, it’s an attempt to revitalize a series born nearly 26 years ago in the smoky arcades of the early ’90s. Fighting games have a sentimental relationship to the past; any significant degree of change, however innovative, is met with a certain mistrust. They work well in two dimensions, for the most part, and have since the heydey of two-player cabinets like Street Fighter 2 and Mortal Kombat. So maybe it’s not too surprising to see the new Shodown hewing to the traditions of its predecessors: 2D combat, manga-inspired art, a special emphasis on melee weapons, the 18th-century Japanese setting.

Speaking to Polygon in the summer of 2016, game designer Yuji Watanabe — who worked on SNK’s King of Fighters 14 — said he’d like to see Samurai Shodown make a comeback, as have others at SNK in recent years. But now, on the eve of the new game’s release on PS4 and Xbox One, producer Yasuyuki Oda wants to make clear that it was the fighting game audience that made the project a reality.

“The real push for it was because the fans really, really, really wanted it,” Oda says through an interpreter. “A lot of the messages that we got were just like, ‘When’s the new Samurai Shodown? When are we going to get it?’”

Nobuyuki Kuroki, director as well as art director on the new game, recalls an online poll where fans were asked what they’d like to see from SNK following 2016’s King of Fighters 14. “Samurai Shodown was the easy winner,” Kuroki says via an interpreter. “It’s very distinct. It felt like it could stand alone, apart from other fighting games in the industry right now. So I think that was a big reason behind it.”

Not long after the 2016 Tokyo Game Show, an executive at SNK approached Oda about the property’s future potential. Kuroki and Oda were in agreement with the fan base. 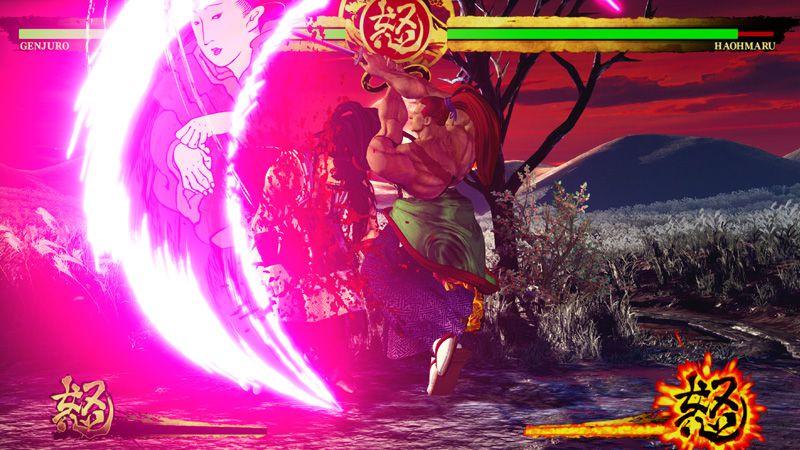 The (pixel) art of fighting

Oda dabbled in pixel art from a young age. A fan of the beloved anime series Super Dimension Fortress Macross, later adapted as Robotech in the U.S., he taught himself Microsoft BASIC and learned to code his own games. He remembers making a pair of “shoddy” scrolling shooters while in school, at least one of which was based on Macross. At the time, this was just a hobby, but it ultimately helped him when it came time to apply for jobs in the games industry.

For a time, he and Kuroki attended the same art school. Oda studied animation; Kuroki went to learn graphic design. But their paths never crossed until they both landed at SNK, where they initially worked together on the Fatal Fury team.

“And we’ve always been friends over the years,” says Kuroki.

As a 21-year-old college graduate in 1993, Oda found himself among the youngest hires at SNK, and his family elders were doubtful of the video game market’s future. Was this really what he wanted to be doing with his life? Prior to the Super NES era, the games industry was a far cry from the mass market juggernaut we know today. But Oda wanted to see where it might take him.

Kuroki, by contrast, says he “spent hundreds of dollars in the arcades” on titles like the original Art of Fighting, but never considered video games as a potential career path. At least not until SNK held a networking event at his school. Once he met employees from within the company, he immediately changed course.

After he joined SNK, Kuroki discovered that the Fatal Fury team he belonged to was one of four separate internal teams at the studio. “And they were all kind of competing against each other in a lot of ways,” he says, “so it almost felt like it was four different companies instead of one, at times.”

He admits to sneaking into other teams’ offices, under the guise of emptying their wastebaskets, just to peek at design documents for works in progress.

While neither Oda nor Kuroki worked on the Samurai Shodown series in those early 2D days, Oda recalls being surprised that one of the series’ characters, Nakoruru, became a fan-favorite despite her modest, non-sexualized appearance. “A lot of characters at that time were popular because of their sexiness,” he says. “But Nakoruru doesn’t show a lot of skin.”

Kuroki and Oda remained at SNK for the better part of a decade, working together on projects like Garou: Mark of the Wolves. Then they both spent a number of years making games at Dimps, a developer founded by former SNK talent, before eventually returning to SNK in recent years as the company pivoted back towards making new console games. 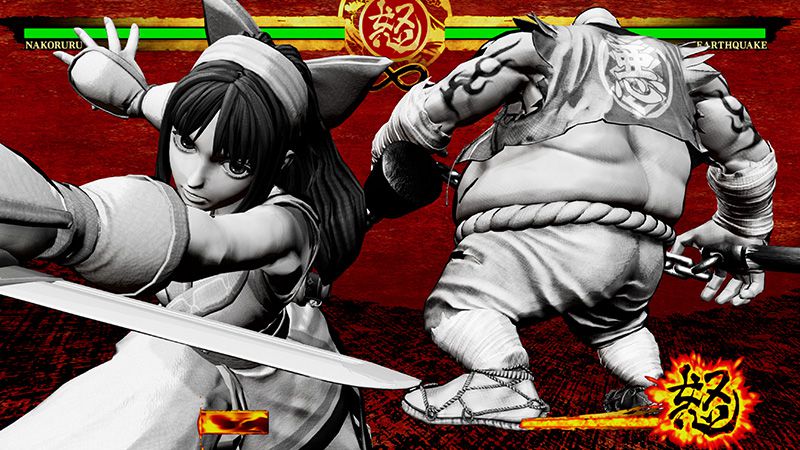 The reboot is more than a fresh start for Shodown; it’s also a chance to honor the franchise’s rich history.

In decades past, on projects like Samurai Shodown 64, Kuroki found that 3D technology was something of a hindrance to the fighting-game formula established by SNK and its contemporaries. “It was still in the early age of 3D, so we were restricted in a lot of ways, and we couldn’t actually do very much of the stuff we wanted to,” he says. “A lot of the stuff that was in the design document didn’t make it into the game. But this time, it was pretty free. We were able to do whatever we wanted [on the Samurai Shodown reboot], so that just made things a lot easier and more fun.”

Oda says the new game began with SNK devs testing the Unreal Engine and getting acquainted with it, and adding the first couple characters, Haohmaru and Nakoruru, to nail down the look and feel of the reboot. This turned out to be a challenge.

“The UE4 engine that we’re using for Samurai Shodown, personally for me, looks really beautiful,” he says. “But in order to get to that point, developing the characters, there’s a lot of hurdles you have to go through. For example, the characters in Samurai Shodown all have weapons. So they have to be properly animated; especially their movements have to be properly animated. And one of the things that I noted was that hair in Samurai Shodown is very gorgeous — it really flows and moves. Animating that, and making sure it looked really nice, was quite a difficult process compared to King of Fighters 14. It all seemed a lot more difficult this time around.”

Other obstacles along the way have been things like multiplatform support, given that the game’s being prepped to launch on both PlayStation 4 and Xbox One and then, eventually, make its way to Google’s Stadia, the Nintendo Switch, and PC. “That’s what’s really killing me right now,” Oda says.

For Kuroki, the project began with a stylus pen. “I basically sat down, and in ZBrush — which is a design-modeling program — I created [all of the legacy characters], and gave those to the other designers to have them brush them up and put them in the game. So that was kind of how the original flow started. Just creating a roster, and making sure the art style and the actual character art was perfect,” he says.

In addition to the 50 or 60 employees who worked on the game internally, SNK also outsourced some of its various art assets; Kuroki estimates as many as 200 people have worked on the 2019 Samurai Shodown.

The game will feature a roster of several all-new characters as well as the return of at least 13 classic fighters from previous entries in the series. Yashamaru, a main character developed specifically for the new title, was conceptualized by Kuroki and then handed off to character designer Yumi Saji, who came up with an illustration for the warrior.

“I basically said, ‘I want a cool, handsome guy in warrior’s armor,’” says Kuroki. “I gave her the order, and she came up with everything. It’s one hundred percent her character, and she really knocked it out of the park, right from the very beginning.”

One thing that has stood out to some fans in the game’s pre-release promotion is that the female characters don’t all dress in modest attire like Nakoruru — and others — wore in the old days. While Nakoruru returns with her iconic look, series mainstay Charlotte, also known for dressing conservatively, returns with a revealing outfit showing her thighs, fan-favorite Shiki returns in her always-sexualized outfit that stands out more due to the new graphics engine, and newcomer Darli Dagger shows perhaps the most skin of any character in the series’ history. The team credits this to its attempt to appeal to new players who might not be familiar with the series, and points out that the approach also carries over to male fighters.

“There are obviously going to be people that are critical about these types of things,” says Oda. “But the fans really wanted characters like Shiki. They wanted characters like [male fighter] Yoshitora, you know? A very sexy playboy. So it might seem like it clashes with what we originally had in the early games, but each game is its own different iteration of a series. We decided that these are characters that people want, so we’re going to put them in the game.”

Game designer Josh Weatherford also mentions that during the project’s development, someone on the team pointed out that Nakoruru’s disposition had gradually changed over the years in other ways, going from sad and stoic to a bit cheery. And the team decided to depict her here closer to the character’s original ’93 incarnation. 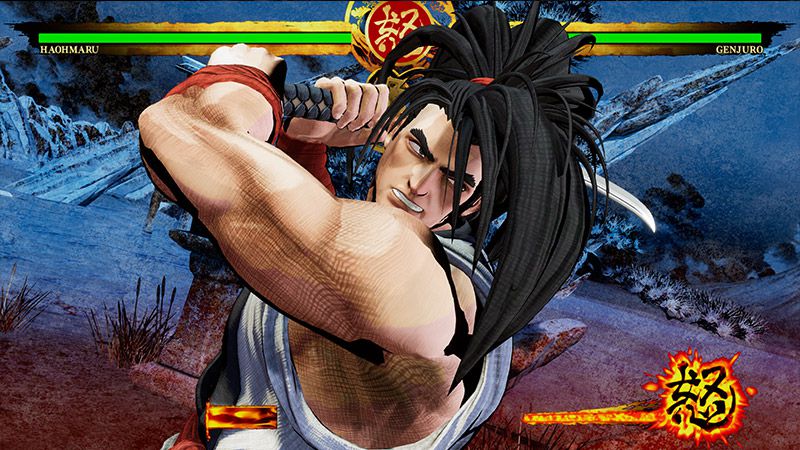 The future is now

Samurai Shodown may be steeped in early-’90s tradition, but SNK doesn’t want reverence for the past to be the company’s only way forward. Oda says he’d like to see the studio venture into genres outside fighting games, maybe every other year or so, with up-and-coming designers splintering off into separate teams. “It has to change and evolve with the game market,” he says. “It’s always molding, always shaping.”

Perhaps the new title’s most forward-thinking innovation is its “Dojo” mode, a deep-learning AI system that SNK calls “revolutionary.” As players spend more and more time with the game, their play style and tactics will continually inform their “ghost,” a CPU-controlled fighter profile that users will be able to share with others around the world.

“One of my inspirations [for the Dojo] was actually Virtua Fighter 4: Evolution on the PS2,” says Weatherford, “which had a really cool quest mode where they created AI characters based on local tournament players and arcade players — famous players in Japan. And, basically, you could go through Virtua Fighter arcades and play against these famous people. I kind of wanted to bring that to a new game in a different way, obviously, but that’s where I was drawing inspiration with the Dojo mode. It’s very different, but I’d always loved that mode as a solo player.”

Kuroki has high expectations for Shodown 2019. And five or 10 years down the road, he’d like to see SNK become a leading presence among AAA game developers.

“I’m really, really confident in the game we’ve created this time,” he says. “It’s very easy to pick up. So I just really hope that a lot of people jump on and have fun.”